What Is It, Causes, Signs and Symptoms, Treatment, and More

What is choanal atresia? 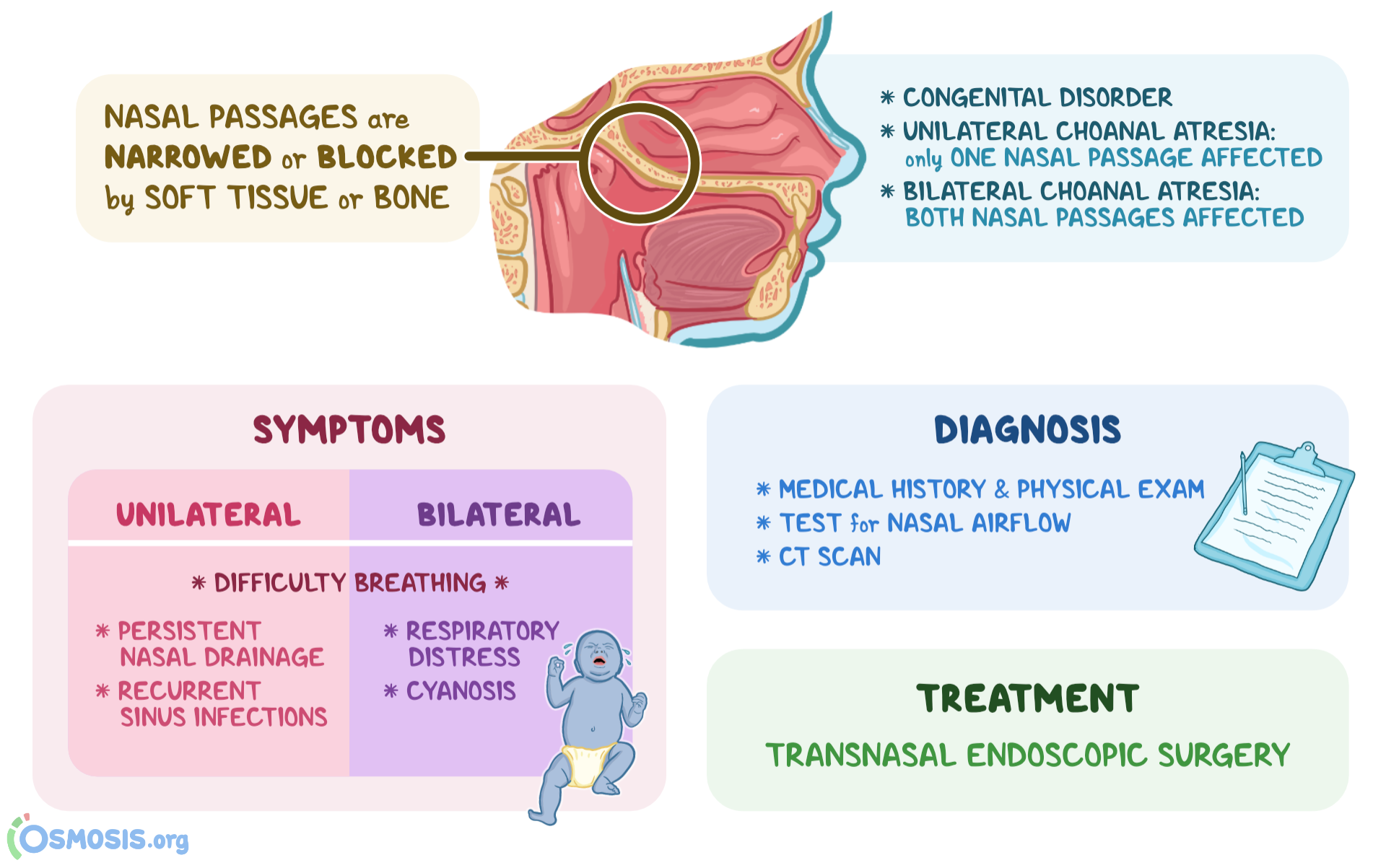 Choanal atresia or stenosis of the nasal cavity develops when the tissues in the nasal cavity, separating the mouth and nose, fail to open, causing a nasal obstruction. It is not fully understood why choanal atresia develops, but it is thought to be a combination of genetic and environmental factors. Choanal atresia is seen more often in those born with an XX chromosome (i.e. assigned female at birth). The fetus may be at higher risk if the birth parent takes certain thyroid medications, like methimazole and carbimazole, during pregnancy. There are also potential links between choanal atresia and high pre-pregnancy intake of vitamin B12, zinc, and niacin.

Choanal atresia can also be associated with a variety of genetic disorders that impede the oral airway and nasal airway of the nose and mouth, such as CHARGE syndrome, Treacher Collins syndrome, and Tessier syndrome.

What are the signs and symptoms of choanal atresia?

Bilateral choanal atresia, on the other hand, will usually present symptoms immediately after birth and may be life threatening. Due to the tendency to breathe through their nose while eating or sleeping, an infant with bilateral choanal atresia may have difficulty breathing and present with cyanosis (which is a blue-ish tint to the skin). However, when the infant begins crying, they unconsciously begin mouth breathing, usually leading to the signs of respiratory distress and cyanosis to disappear.

How can you test for choanal atresia?

In cases of unilateral choanal atresia, diagnosis is often inadvertently delayed until late childhood due to the presence of one unaffected nasal passage. When unilateral choanal atresia is suspected, the child will typically present with a history of recurrent sinus infections and persistent nasal drainage. A clinical assessment may reveal chronic or persistent nasal drainage on the affected side, a history of chronic sinus infections, an obstructed nasal passage, and noisy breathing.

With bilateral choanal atresia, symptoms are usually apparent immediately after birth and a physical exam can reveal acute respiratory distress and difficulty breathing. Due to the difficulties with breathing, the newborn will often display cyanosis at rest and while feeding. The cyanosis typically resolves as the baby begins to cry and will usually return again while at rest or feeding.

In either case, if choanal atresia is suspected, a test for nostril patency or breathing is often conducted. This is done by placing a laryngeal mirror under the nostril and looking for consequent fogging of the mirror which is indicative of airflow. If fogging appears, there is airflow and the passage is likely clear. If there is no fogging on the mirror, then a nasal obstruction might be present. To confirm the presence of an obstruction in the nasal cavity, a small catheter can be inserted into the nasal passages. If there is a blocked or narrowed nasal passage, the catheter will meet resistance and be unable to pass through the nasal cavity.

To further confirm choanal atresia, a computed tomography, or CT scan, may be performed to visualize specific characteristics of the nasal obstruction in the nasal cavity or nasal passages.

How is choanal atresia treated?

For both types of choanal atresia, surgery is the only definitive treatment to correct the obstruction and restore airflow. However, the decision to have surgery depends on the severity of the choanal atresia, and if it affects one or both of the nasal passages.

With unilateral choanal atresia, treatment is usually not urgent. If the newborn has minimal respiratory distress, surgery may be delayed until they reach an older age, when the nose anatomy has matured and developed. In order to relieve and manage symptoms, nasal saline spray can help keep the nasal passages clear. In some cases, supplemental oxygen may be required.

Bilateral choanal atresia often requires immediate surgical treatment due to the complete lack of airflow. Upon birth, immediate insertion of an oral airway or endotracheal intubation may be required to help with cyanosis and difficulty breathing. This consists of a tube being placed in the throat to open up an airway. A McGovern nipple, a pacifier-like nipple that with a large opening, can also be used in the short term to help the newborn breathe through the mouth.

In order to correct the choanal atresia, a transnasal endoscopic surgery is performed. In a transnasal endoscopic approach, an opening is made manually in the nasal choanal, followed by the placement of a small piece of a tube in the nasal passage to act as a stent, or opening. The stent is typically removed a few weeks after surgery. Some cases may require the surgery to be repeated since there is a risk of the nasal passage closing again after the stents are removed.

What are the most important facts to know about choanal atresia?

Hall, B. (2020). Factsheet about Choanal Atresia or Stenosis. In The Charge Syndrome Foundation. Retrieved October 26, 2020, from https://www.chargesyndrome.org/for-families/resources/factsheet-about-choanal-atresia-or-stenosis/