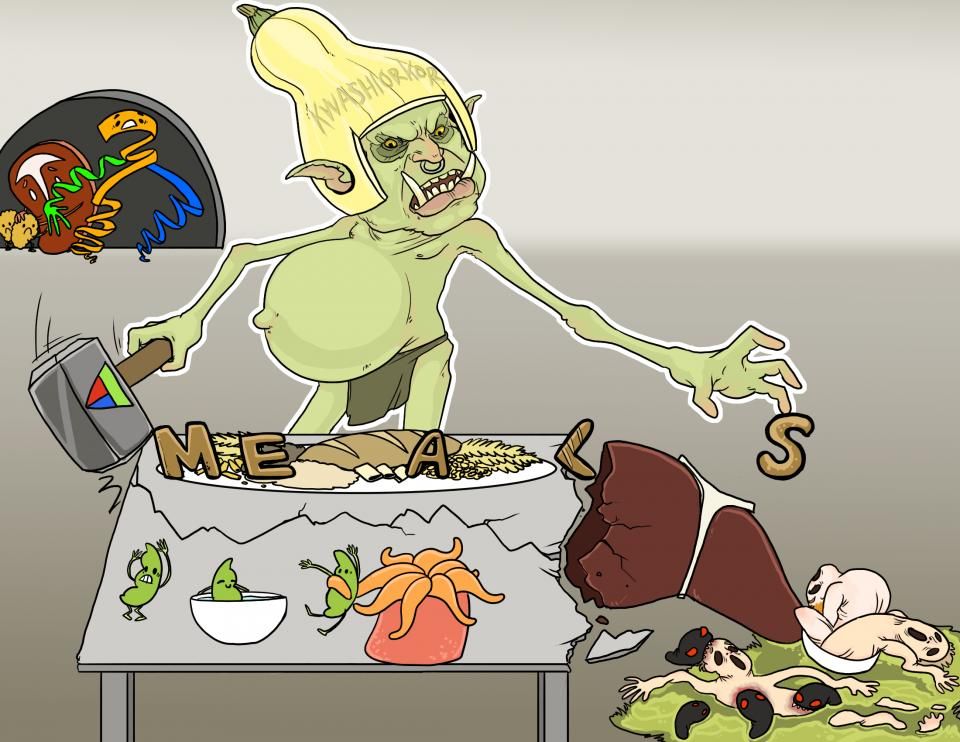 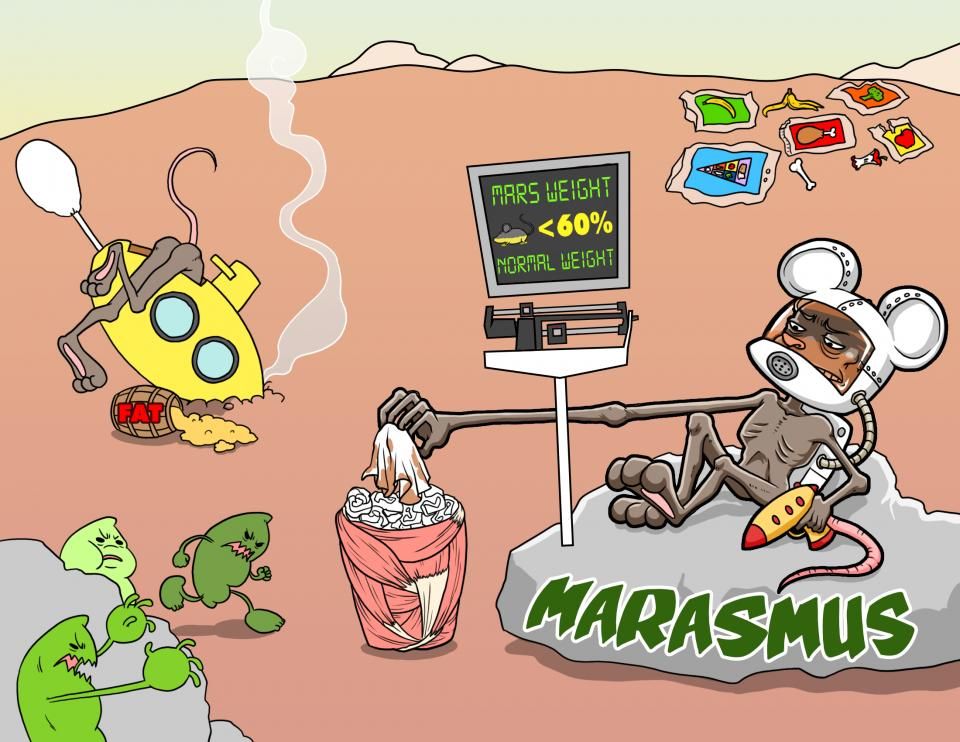 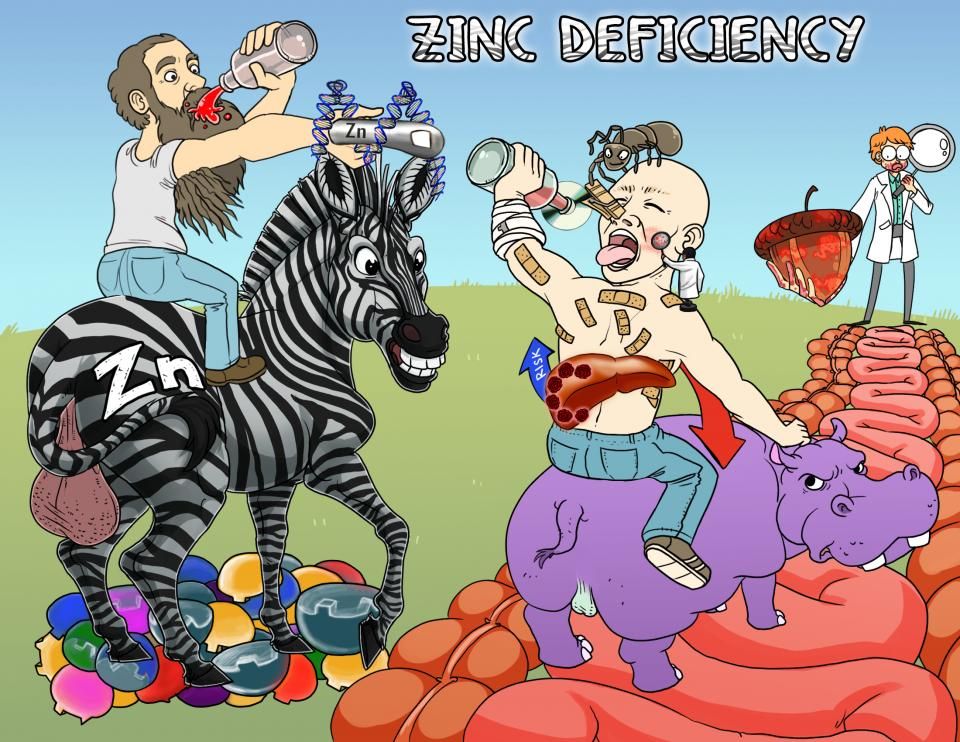 A 2 year old girl, named Addae, is brought to the pediatric clinic for a well-child visit.

She was adopted from Ghana a month ago, and her new parents tell you that they’ve noticed dark patches of flaky skin all over her body.

Physical examination reveals erythematous plaques on her face, axilla, and groin skin folds, as well as prominent rounded cheeks and a distended abdomen.

You also notice that both her feet and ankles are swollen, and when you press for a few seconds, a pit remains.

Finally, upon palpation of the abdomen, the liver appears enlarged.

You decide to run some blood tests, which reveal that Addae has decreased serum levels of albumin.

Based on the history and initial presentation, Addae seems to have some form of malnutrition, which results from not getting enough nutrients from the diet.

For your exams, two important conditions associated with malnutrition include zinc deficiency, meaning there’s not enough zinc to meet the body requirements, as well as protein-energy malnutrition, which refers to a lack of energy due to the inadequate intake of protein or total calories, and has two major forms: Kwashiorkor and marasmus.

Zinc is a mineral that’s found mostly in poultry, oysters, and fish.

Normally, it is mainly absorbed in the duodenum and jejunum, and gets transferred via the portal circulation to the liver, where it gets stored.

So, for your test, note that the liver is the main organ involved in maintaining systemic zinc homeostasis.

Now, zinc is essential for the function of hundreds of different enzymes.

In addition, zinc is necessary for the formation of specific transcription factors motifs, known as zinc fingers, that bind DNA and regulate the expression of various genes.

The most high yield one is the gene coding for insulin-like growth factor-1, or IGF-1, which plays a key role in cell growth and proliferation.

What’s high yield to remember is that this is especially important for rapidly proliferating cells, such as those of the skin, hair follicles, or immune cells.

Now, in a test question about zinc deficiency, look for clues like inadequate consumption of poultry, oysters, or fish, or a condition causing a defect in the intestinal absorption of zinc.

An example is celiac disease, which is an autoimmune condition where the gluten in food triggers the body’s immune cells to attack and damage the intestinal mucosa.

Another high yield cause is acrodermatitis enteropathica, which results from an autosomal recessive mutation in the gene coding for a protein that’s necessary for the uptake of zinc through the small intestine mucosa.

And since the liver plays an important role in zinc homeostasis, zinc deficiency is commonly seen in individuals with alcoholic cirrhosis.

And that’s something you definitely need to know for your exams!

Symptoms of zinc deficiency include impaired wound healing; alopecia or thin and sparse hair in the axilla, face, and pubic region; and immune dysfunction, which may lead to recurrent infections of the respiratory or gastrointestinal tracts.

This is often accompanied by dysgeusia or an altered sense of taste, anosmia or loss of the ability to smell, and male hypogonadism, meaning a diminished function of the testes, which results in decreased synthesis of testosterone and may manifest as delayed puberty.

Okay, let’s switch gears and discuss protein-energy malnutrition, which is a lack of energy that results from inadequate intake of protein or total calories.

For your exams, remember that this most commonly occurs in resource-limited regions of Sub-Saharan Africa, South-East Asia and Central America, and has two major forms: Kwashiorkor and marasmus.

Now, Kwashiorkor results from severe protein deficiency, in the setting of normal or even high calorie intake.

This lack of protein leads to decreased synthesis of important proteins like albumin by the liver.

With less albumin in the blood, the oncotic pressure that allows for water retention within the blood vessels ultimately falls.

As a result, water leaks out of the blood vessels and into the tissues, resulting in edema.

At the same time, remember that there’s also decreased synthesis of apolipoproteins in the liver.

Normally, apolipoproteins are fundamental for the creation of lipoproteins, which then ferry lipids like triglycerides and cholesterol from the liver through our body.

So, without apolipoproteins, all those lipids build up in the liver, causing it to enlarge.

Another thing to note is that protein deficiency can cause the thymus, which is where T lymphocyte maturation normally takes place, to atrophy or shrink.

And as a consequence, there’s compromised cell-mediated immunity.

Kwashiorkor most commonly appears in children between 6 months and 3 years of age, who first appear irritable or lethargic, and are more prone to infections.