Sarcoma botryoides, also known as botryoid rhabdomyosarcoma, is a rare subtype of a highly malignant tumor called embryonal rhabdomyosarcoma. The name botryoides originates from the Greek root bótry(s), which refers to the appearance of “a bunch of grapes”.

A malignant tumor refers to a mass of cells that divides uncontrollably and can grow and spread to other parts of the body, causing metastases. Overall, sarcomas are a large family of malignant tumors that develop from bones, muscles, cartilage, blood vessels, and other connective or supportive tissues. Specifically, rhabdomyosarcomas are malignant tumors that arise from rhabdomyoblasts, immature cells that would otherwise develop into skeletal (voluntary) muscle. Based on their microscopic appearance, rhabdomyosarcomas can be further classified into various types, including embryonal and alveolar rhabdomyosarcoma, among other, less common types.

Specifically, sarcoma botryoides is a variant of embryonal rhabdomyosarcoma that is characterized by the presence of a round, grape-like mass in the affected organ. Sarcoma botryoides most commonly affects individuals under the age of 4, although it can sometimes occur in older individuals. It typically develops in the walls of hollow organs, particularly in the vagina of young infants, the bladder, biliary tract, and nasopharynx. In teenagers and adults, it can also develop in the cervix or uterus. The typical clinical presentation is characterized by vaginal bleeding in a child and irregular bleeding in youths and adults. 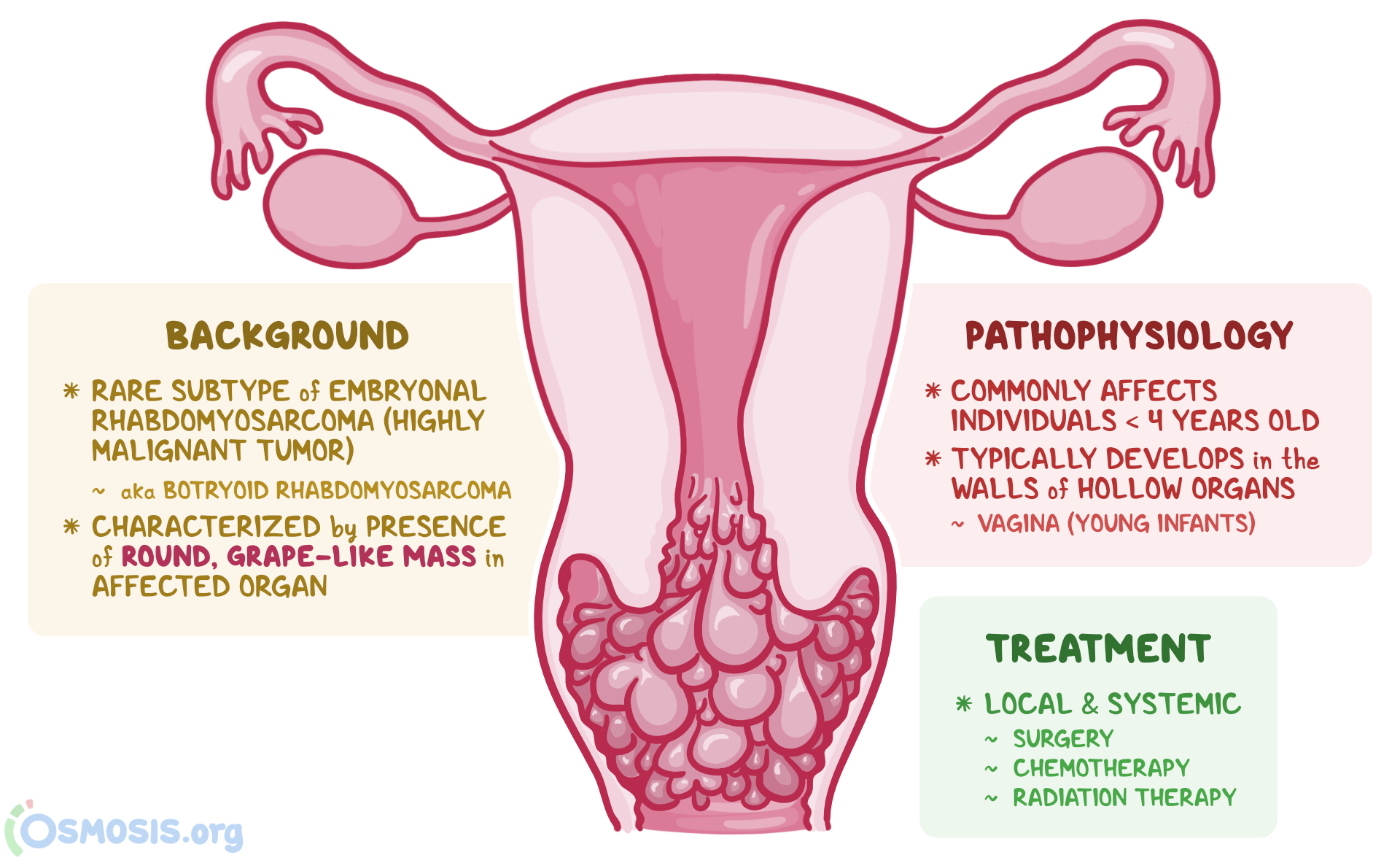 How rare is sarcoma botryoides?

Sarcoma botryoides is a very rare form of cancer, with fewer than 4 cases per million children per year. Despite its rarity, rhabdomyosarcoma is one of the most common sarcomas in children, accounting for up to 4 to 6% of all childhood cancer cases.

The exact cause of sarcoma botryoides is unknown. Most cases of sarcoma botryoides occur in children without any predisposing risk factors. However, individuals who have familial syndromes that cause mutations in genes that regulate cell proliferation and cell death (e.g., Li-Fraumeni syndrome) are at a higher risk of developing embryonal rhabdomyosarcoma, among other tumors.

How is sarcoma botryoides treated?

Sarcoma botryoides is usually treated with a combination of local and systemic methods, including surgery, chemotherapy, and radiation therapy. The specific treatment approach will vary depending on the location and stage of the tumor, as well as the person’s overall health and preferences. Despite the aggressive nature of the tumor, sarcoma botryoides generally has a better outcome than other types of rhabdomyosarcoma.

What are the most important facts to know about sarcoma botryoides?

Sarcoma botryoides is a malignant tumor that arises from immature skeletal muscle cells (i.e., rhabdomyoblasts) lining the walls of hollow organs, including the vagina, bladder, and biliary tract. This cancer most commonly affects children under the age of 4, although it can sometimes present in older individuals. The characteristic feature of sarcoma botryoides is a round mass that resembles a bunch of grapes. Treatment of sarcoma botryoides generally involves a combination of surgery and chemotherapy, with or without radiation therapy.

Quiz yourself on Sarcoma Botryoides

Development of the axial skeleton 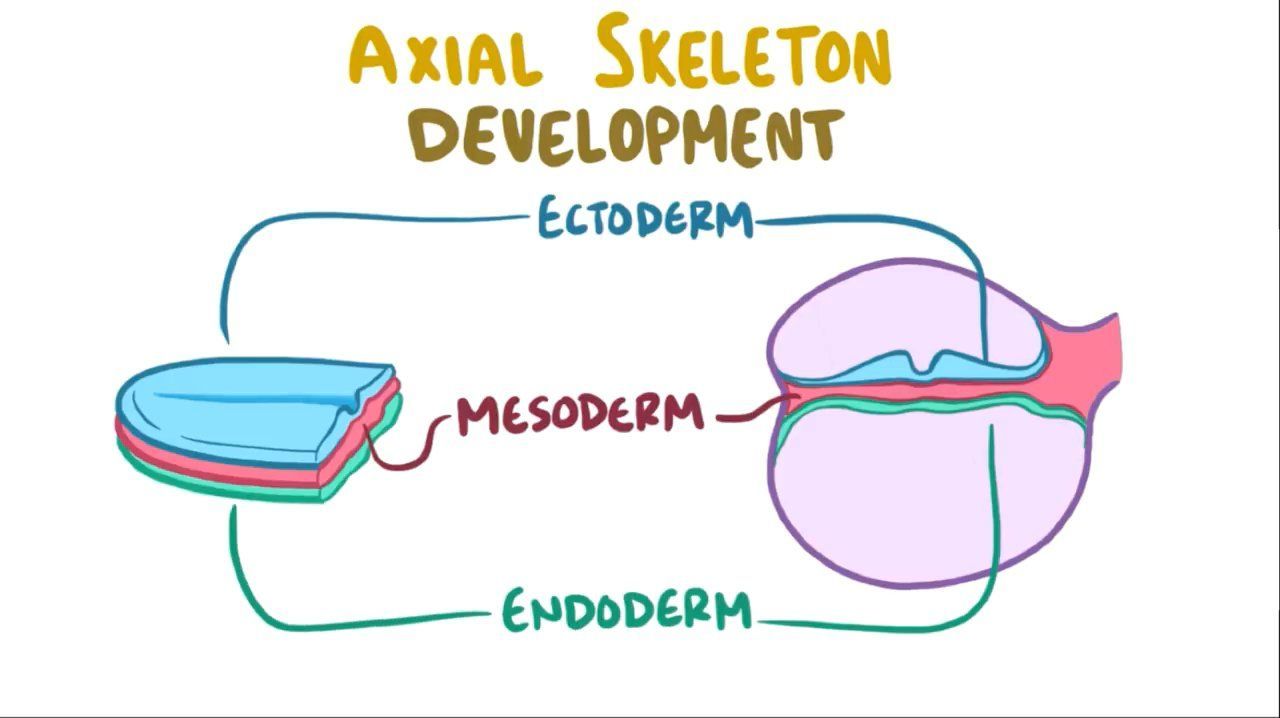 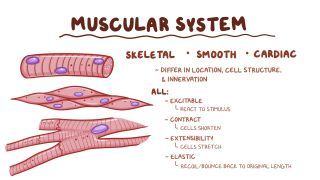 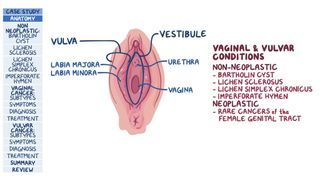