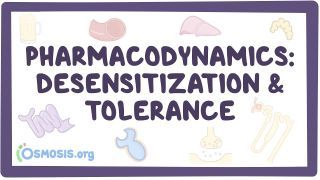 Transcript for Pharmacodynamics: Desensitization and tolerance

Pharmacodynamics refers to the mechanisms and effects of medications within the body. Or more simply, it’s what medications do to the body and how they do it.

Alright, so in order to have an effect, most medications have to reach their target cells and bind to a receptor.

Receptors are specialized proteins both on the cell membrane and inside the cell, that can bind to a ligand.

Now, that ligand could be an agonist, which is a molecule that binds and activates a receptor.

This means the receptor changes its shape or activity, and that gives rise to a signal cascade of intracellular molecules - the second messengers, which ultimately results in some change in the cell’s function.

Okay, now if we massively expose the receptors to their agonists, we will get a huge downstream signal cascade and cellular response.

But if we continuously or persistently flood that receptor with the same agonist at the same dose, what will happen, is that the ability of the agonist to produce that response will drop.

This is actually a defense mechanism, whereby cells prevent their overstimulation by agonists.

If this happens very rapidly, like within a few minutes, it’s called desensitization or tachyphylaxis.

If this happens more gradually, like over the course of days to weeks, it’s called tolerance.

Desensitization can occur with the initial dose of a medication, while tolerance typically happens with repeated doses.

Alright, so, there are several mechanisms responsible for these phenomena. First, chronic exposure to agonists cause a decrease in the number of receptors.

The decrease in the number of the receptors could result from the reduced synthesis of new receptors, also known as downregulation.

This is when the cell swallows up the receptor in vesicles pinching off from the cell membrane and sends them to the lysosome for digestion.

This phenomena can be seen in chronic opioid and other drug users where the target receptors are down regulated, so a higher dose is needed to achieve the same high.

Alternatively, the receptors may be modified where they are “uncoupled” from their intracellular signaling pathway, meaning they can’t activate the secondary messenger proteins anymore.