What is a basilar skull fracture?

A basilar skull fracture, or skull base fracture, is a type of traumatic head injury that involves a break in at least one of the bones at the base of the skull.

The base of the skull is a complex structure that forms the floor of the cranial cavity and separates the brain from the head and neck. It is composed of the temporal, occipital, sphenoid, and ethmoid bones as well as the orbital part of the frontal bone. These bones contain numerous openings, or foramina, that allow cranial nerves and blood vessels to pass from one region to another. With skull base fractures, these structures can become damaged, resulting in serious and potentially life-threatening complications. 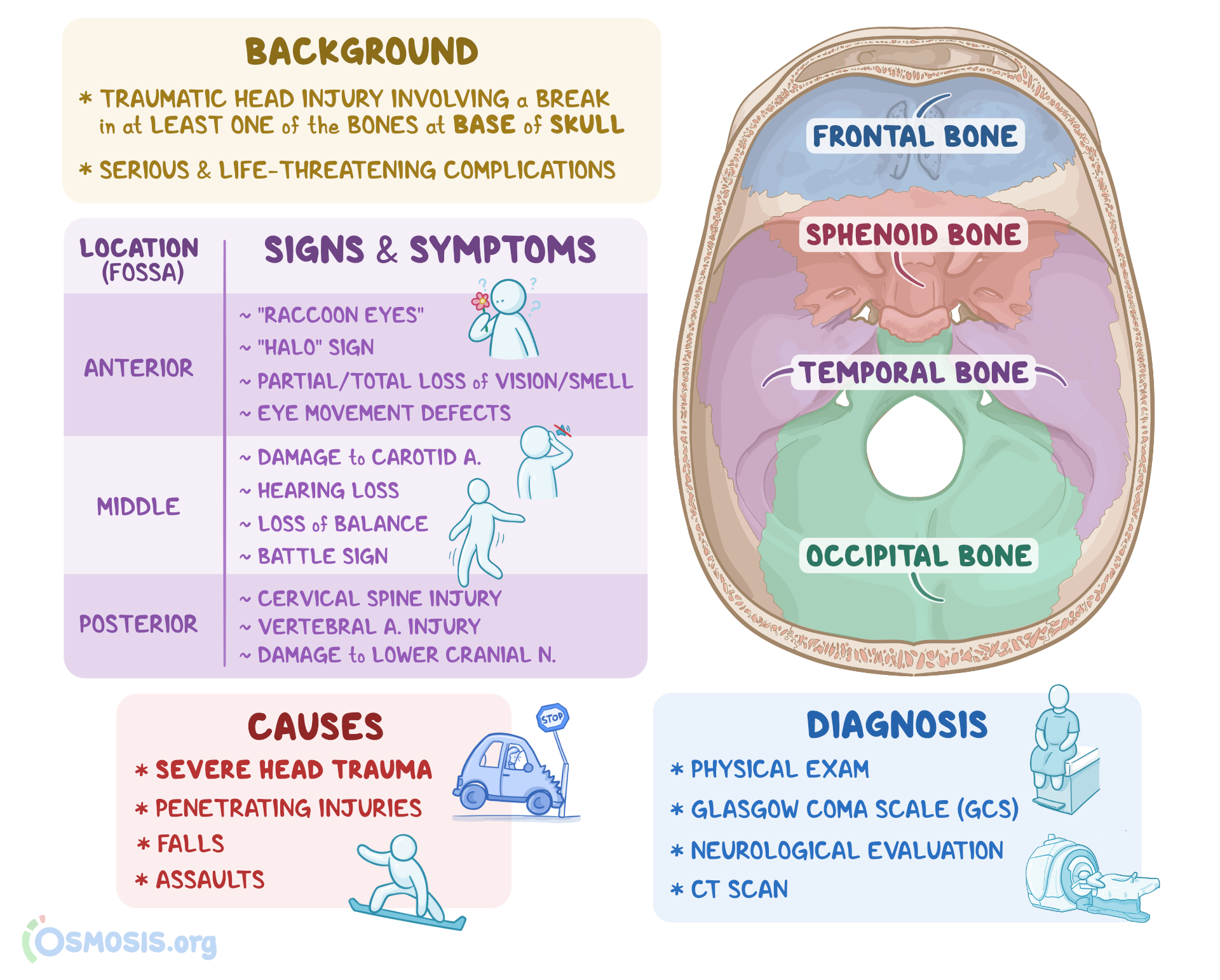 What causes a basilar skull fracture?

Most basilar skull fractures occur in the setting of severe head traumas, such as those caused by motor vehicle accidents, motorcycle crashes, or pedestrian injuries. Other less common causes include falls, penetrating injuries (e.g., gunshot wound), and assaults. Because of the high amount of force required to produce a basilar skull fracture, these types of fractures are more common in young individuals who are more likely to take part in high-risk activities (e.g., rock climbing, skydiving, bungee jumping, etc.).

What are the signs and symptoms of a basilar skull fracture?

Signs and symptoms of basilar skull fractures are related to the close proximity of the skull base to cranial nerves; blood vessels; and meninges, which are the protective membranes that surround the brain and spinal cord and contain the cerebrospinal fluid (CSF). Skull base fractures increase the risk of developing meningitis because of the possible contact of bacteria in the nose, throat, or ear with the central nervous system.

Based on their location, skull base fractures can be divided into those affecting the anterior, middle, or posterior fossa. Anterior basilar skull fractures are associated with the “racoon eyes” sign, which refers to consequent bruising around the eyes. Additionally, these fractures can cause CSF to leak out through the ears or nose, resulting in the classic “halo” sign. This sign appears when CSF mixes with blood on an absorbent surface, such as paper or bed sheets, and creates a double ring pattern. Other signs of anterior basilar skull fractures include partial or total loss of vision and smell as well as eye movement defects due to cranial nerve damage.

Middle skull base fractures are the most common type and mainly affect the temporal bone and inner ear. They are associated with damage to the carotid artery as well as with hearing loss and loss of balance. These types of fractures can lead to blood pooling behind the eardrum, causing it to appear purple. Additionally, they can result in bruising behind the ear, known as the Battle sign.

Finally, posterior skull base fractures are associated with cervical spine injury, vertebral artery injury, and damage to the lower cranial nerves. These fractures are less common than the other two but carry the risk of damaging the brainstem, which could be fatal.

What is the battle sign in a basilar skull fracture?

The Battle sign consists of a crescent-shaped bruise that appears behind one or both ears, just over the mastoid process. It was named after William Henry Battle, an English surgeon. In the setting of severe head trauma, the Battle sign is highly indicative of a basilar skull fracture.

How is a basilar skull fracture diagnosed?

Diagnosis of a basilar skull fracture is sometimes suspected by the characteristic clinical findings upon physical examination. Clinical assessment typically uses the Glasgow Coma Scale (GCS) in order to evaluate the level of consciousness in a person following a traumatic brain injury. The GCS is a 15-point scale that evaluates three responses: eye movement, verbal response, and motor response. Individuals with a GCS of 13 to 15 are considered to have a mild head injury, whereas individuals with severe head injury typically have a GCS of 8 or less.

After the initial evaluation, it is important to recognize any blood or CSF leaking out of the ear or nose as well as the presence of bruising around the eyes or behind the ears. In conscious individuals, a complete neurological evaluation may be performed to identify any cranial nerve injury as soon as possible.

Once the physical examination is complete, a computed tomography (CT) scan is usually performed to identify the exact location of the fracture and potential risk of complications.

How is a basilar skull fracture treated?

Most basilar skull fractures heal by themselves and do not require treatment. However, surgical intervention may be necessary in cases complicated by intracranial bleeding, severe nerve or vascular injury, or persistent CSF leaks. In all cases, individuals may be admitted to a hospital for observation.

What are the most important facts to know about a basilar skull fracture?

Basilar skull fractures involve a break in one or more bones at the base of the skull. These fractures should be considered in all individuals with severe head injuries, especially those with suggestive physical signs, such as bruising around the eyes (Racoon eyes sign), bruising behind the ears (Battle sign), and CSF leaks from the nose or ear canal. Further complications include cranial nerve injury, blood vessel damage, and meningitis, which can appear in the following days. Diagnosis of a basilar skull fracture is based on a complete neurological examination followed by a CT scan. Although basilar skull fractures tend to heal without medical intervention, in certain cases, surgery may be performed if a CSF leak does not stop or in cases of severe nerve or blood vessel damage.

Quiz yourself on Basilar Skull Fracture

Bones of the cranium 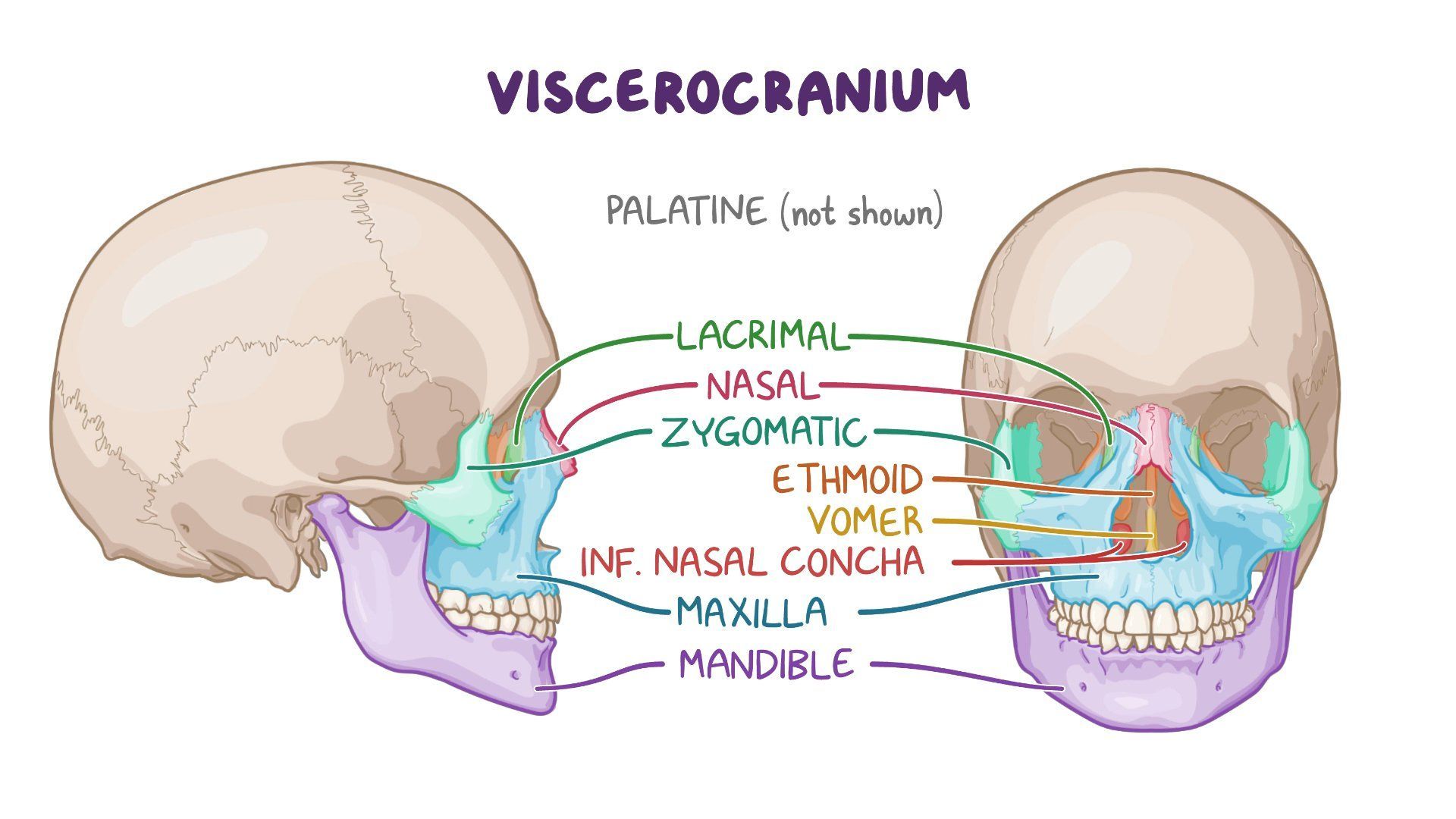 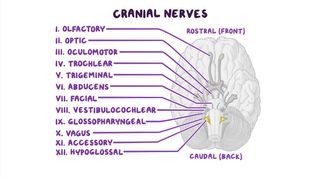 Introduction to the cranial nerves 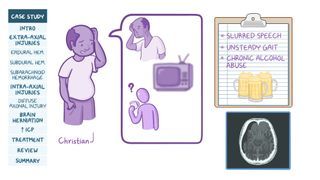 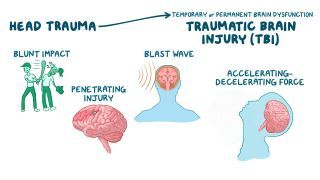 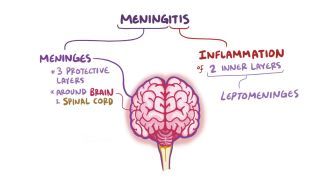