Bones of the Vertebral Column 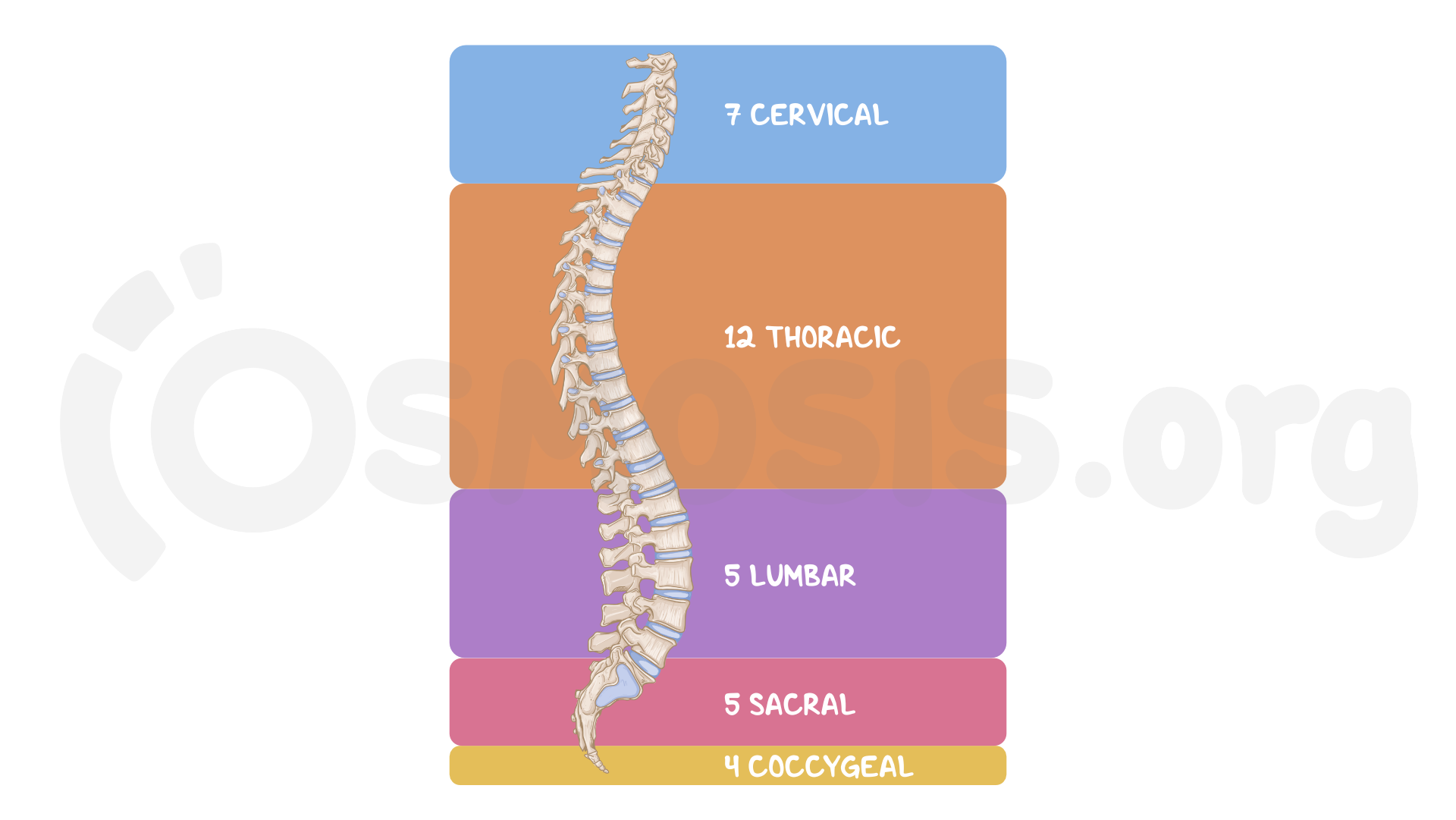 Figure 1.  Section of the Spine 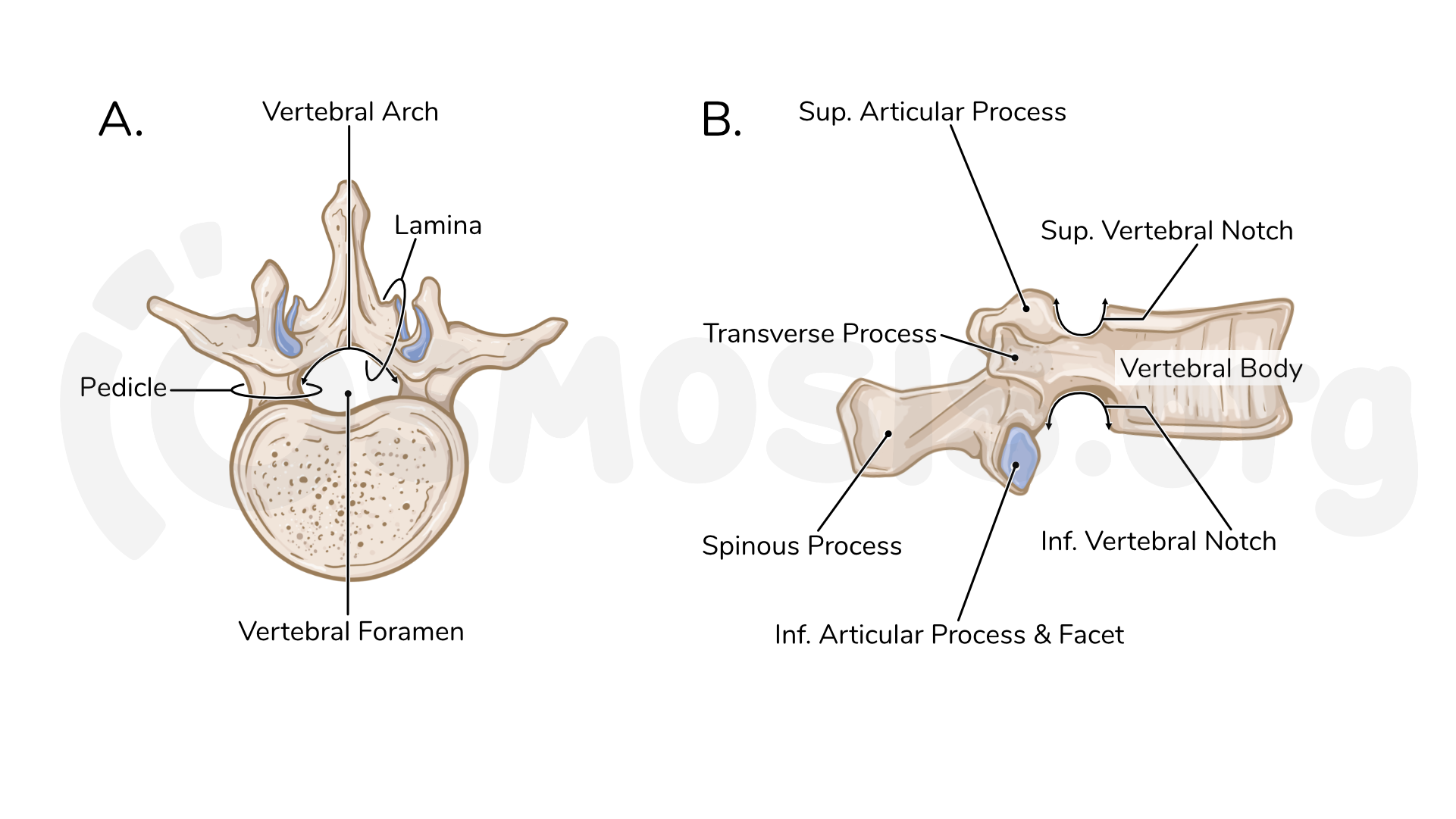 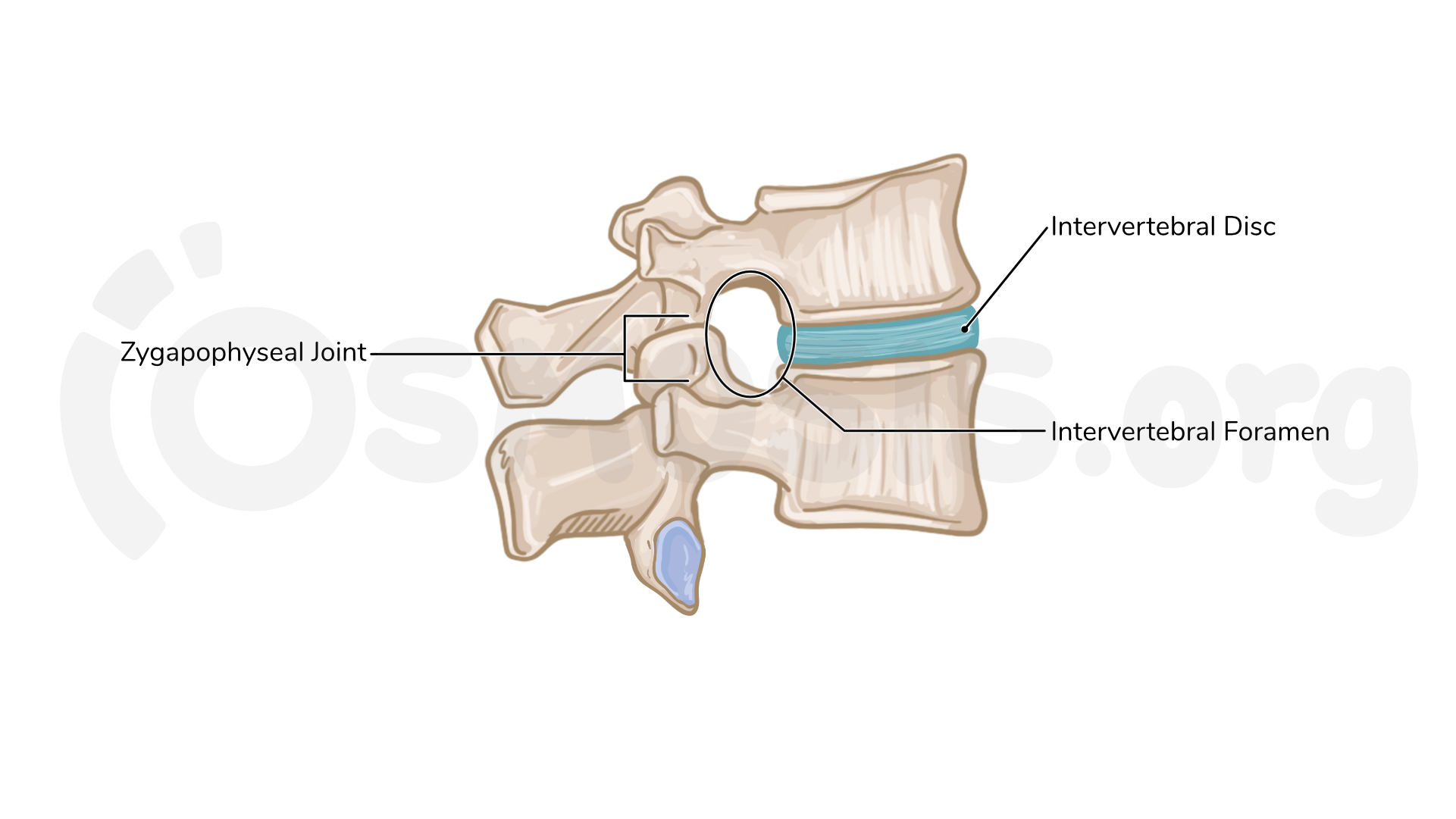 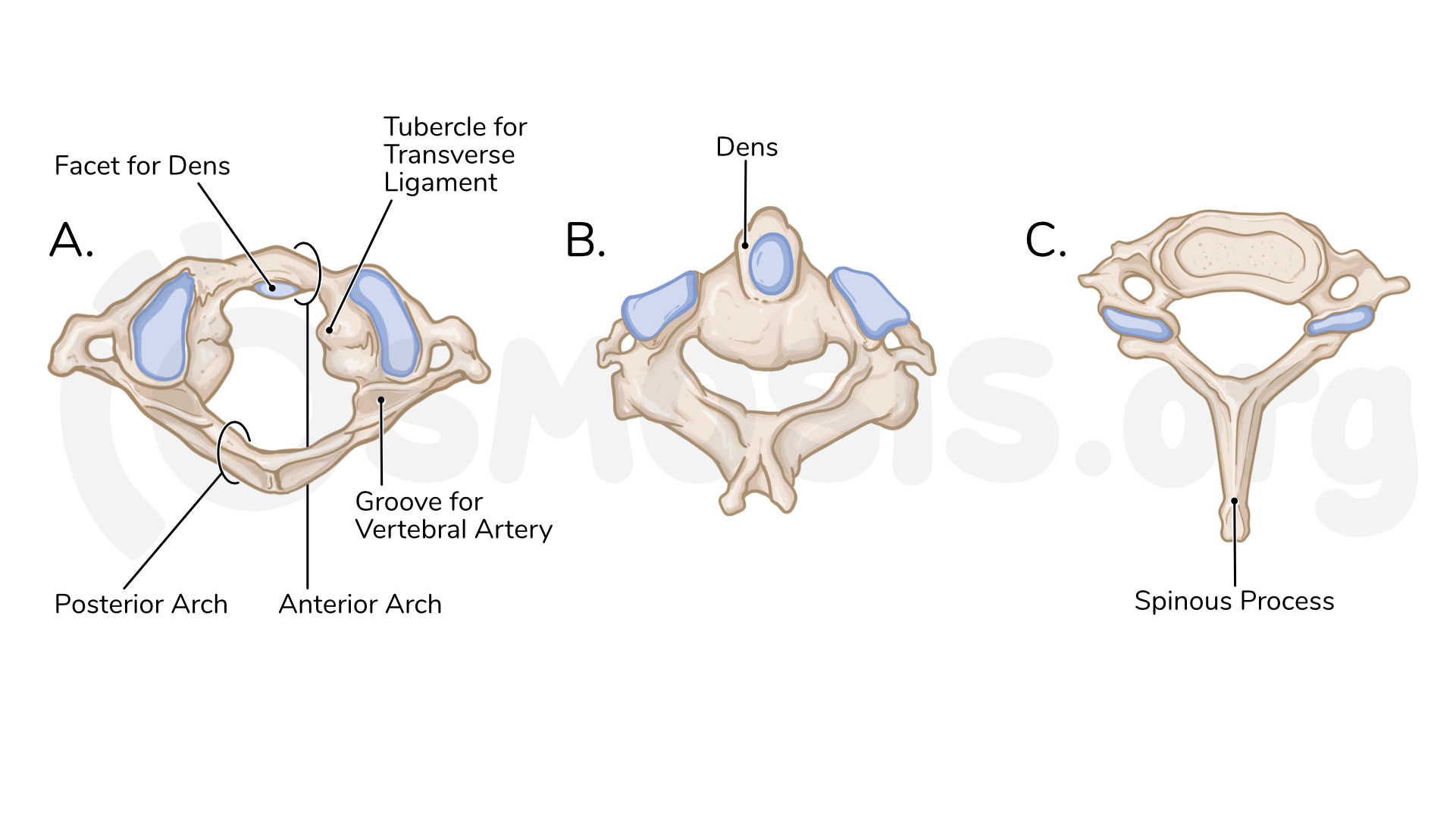 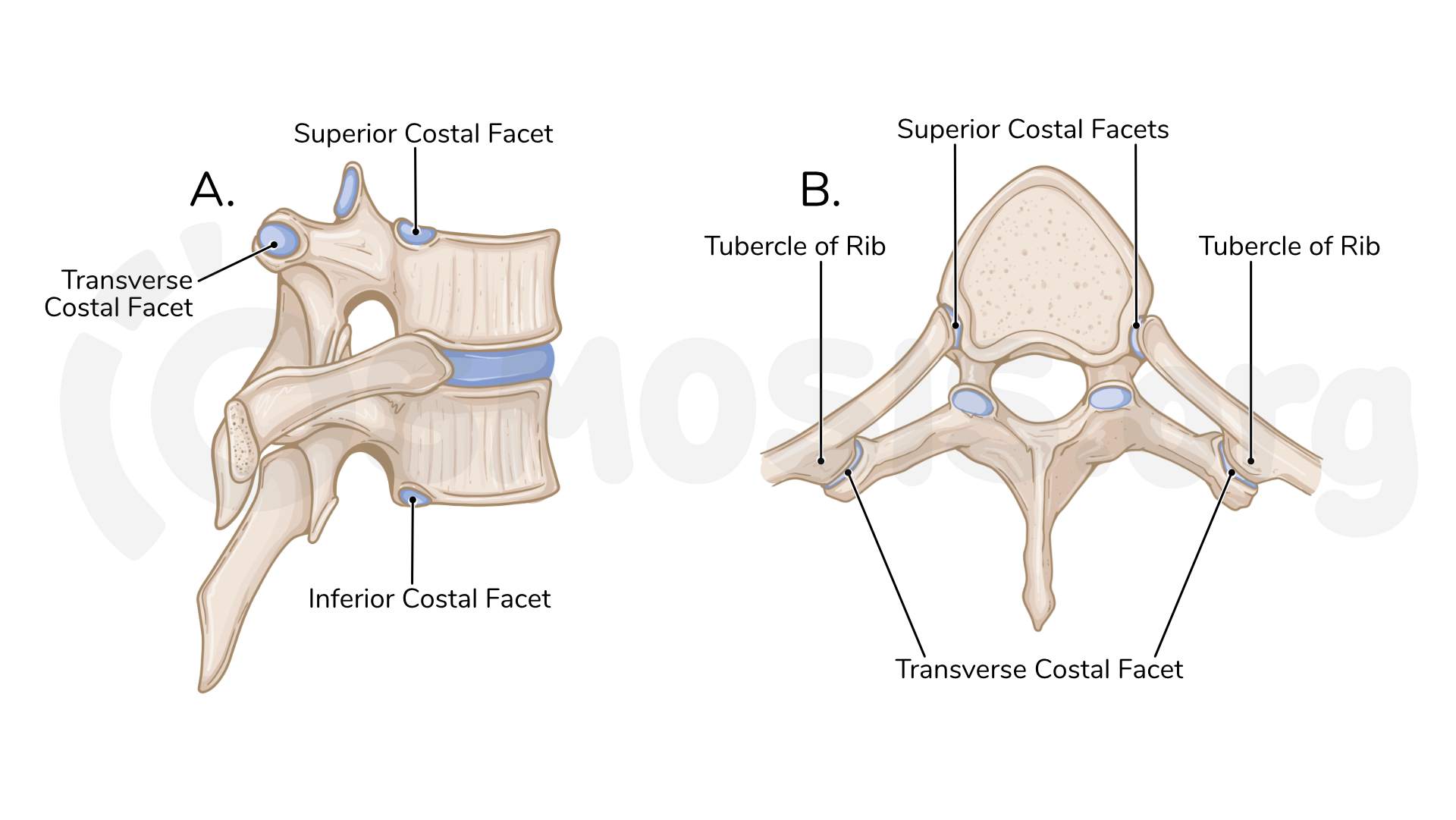 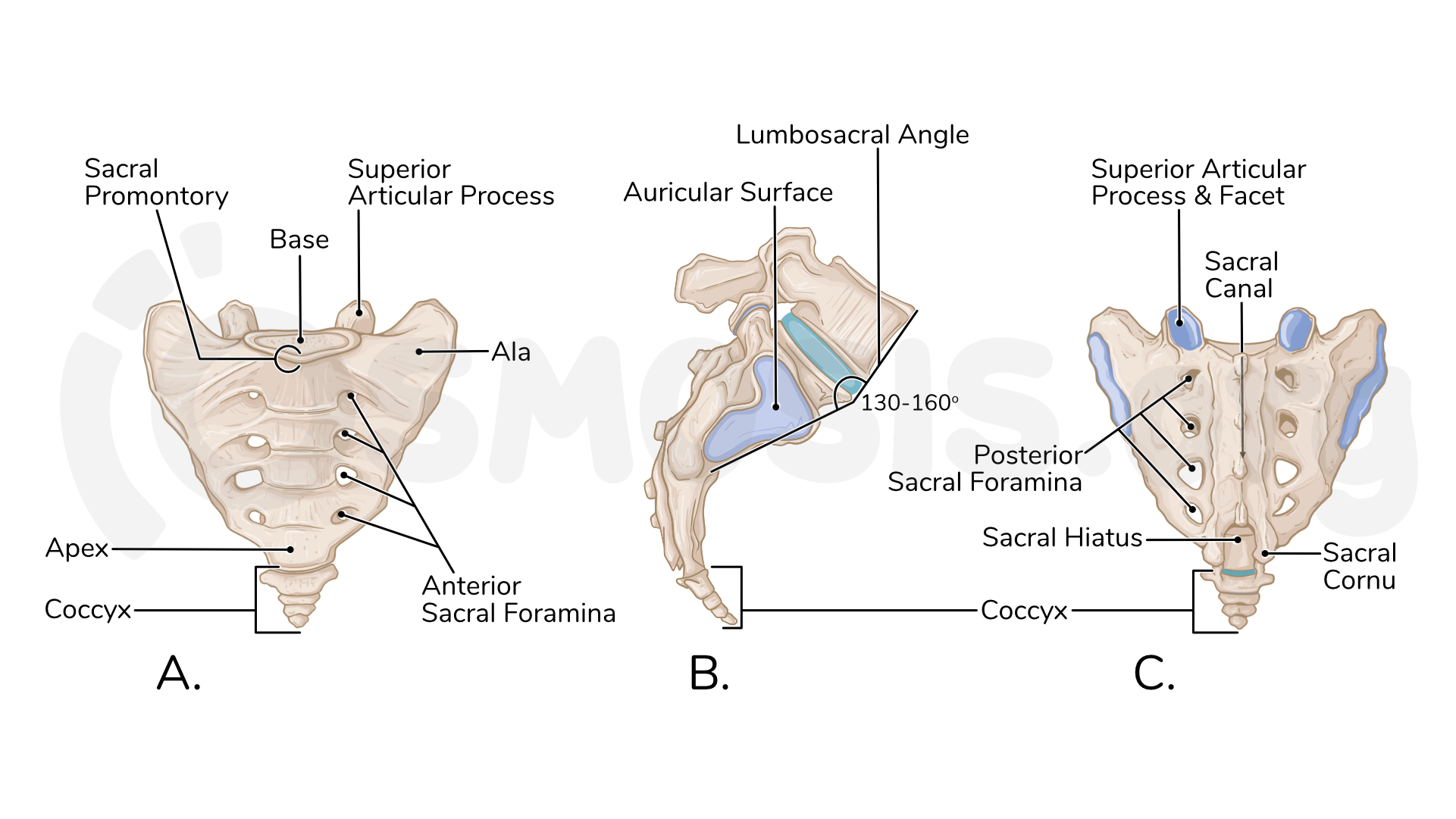 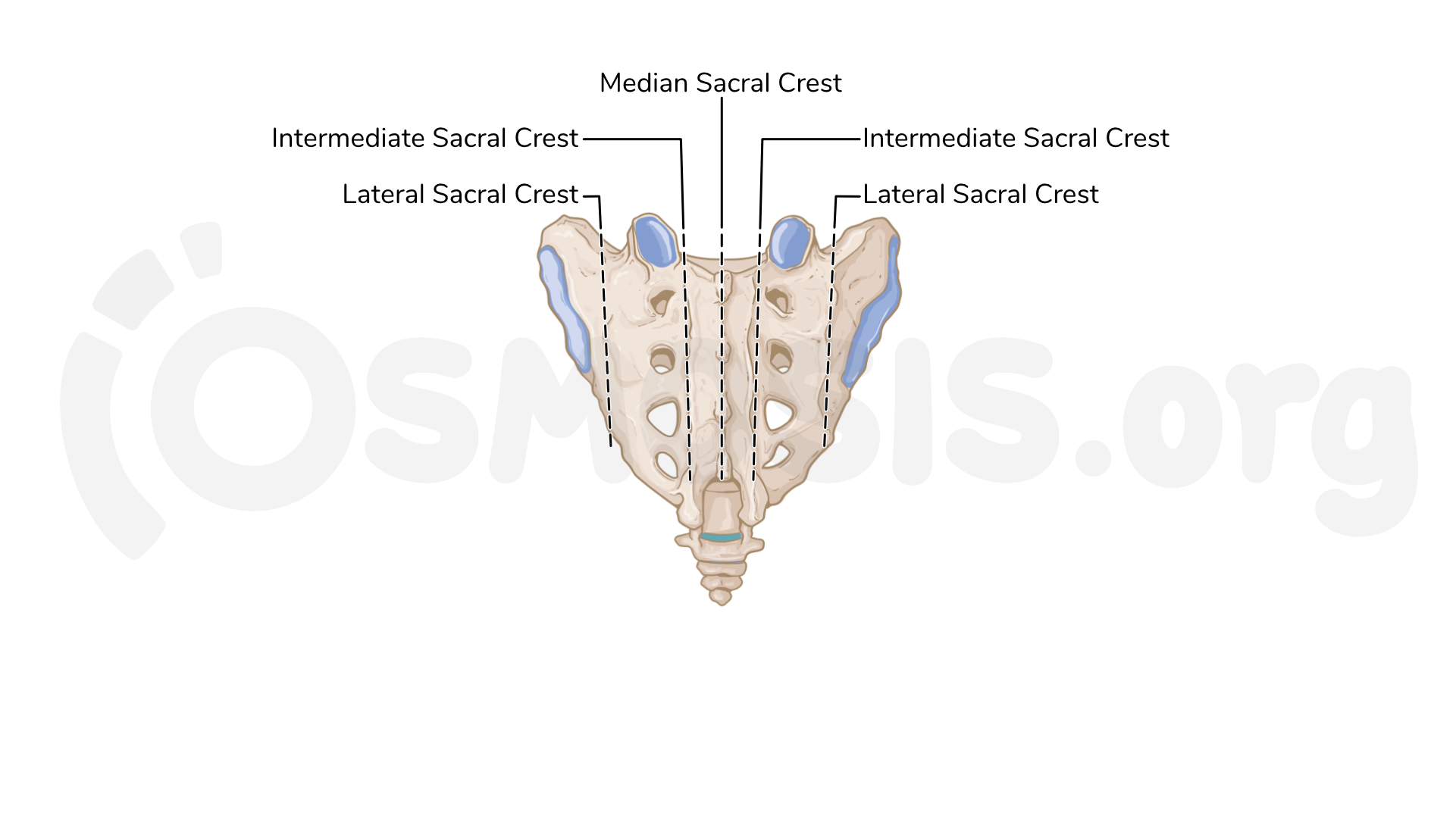 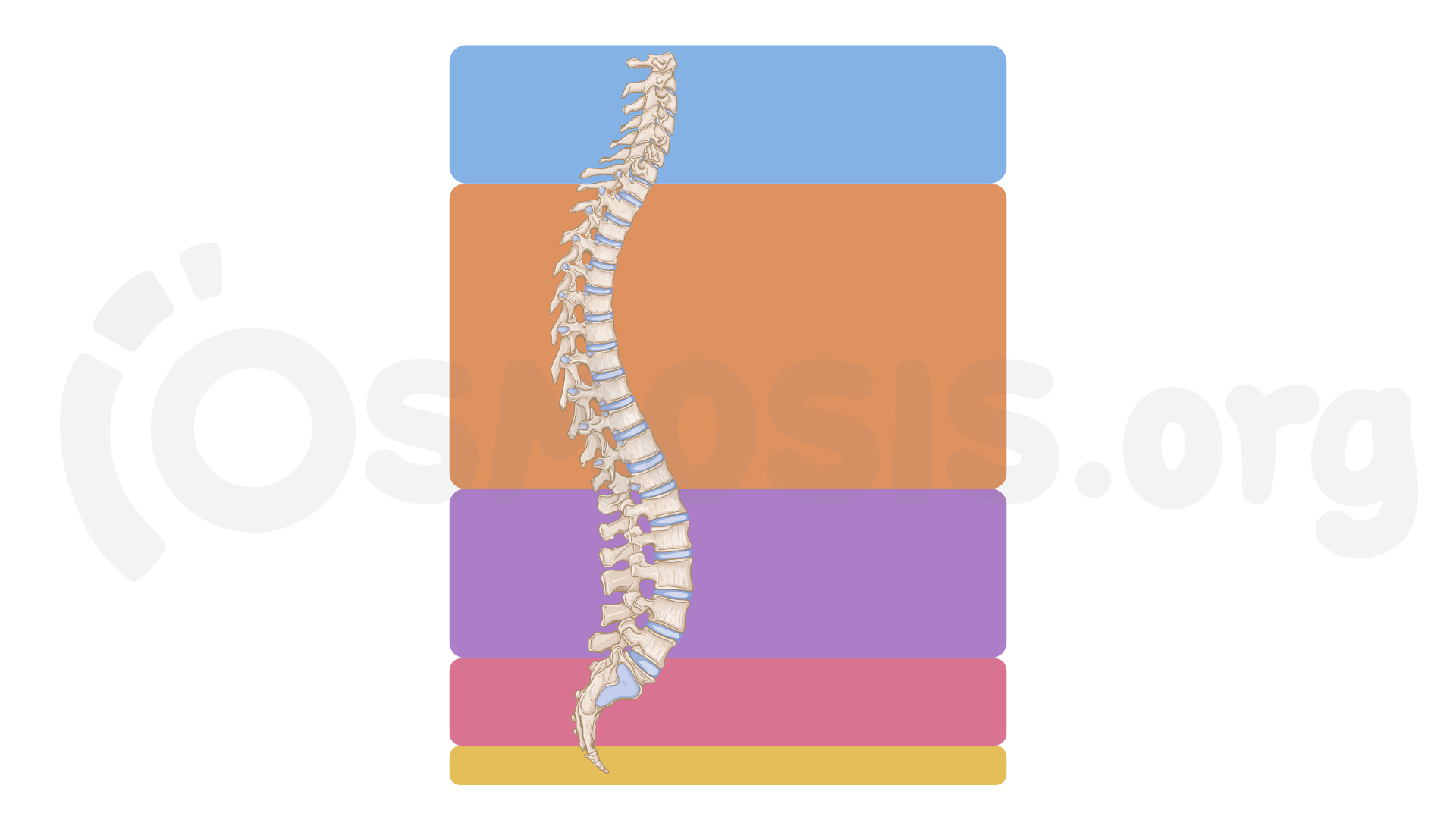 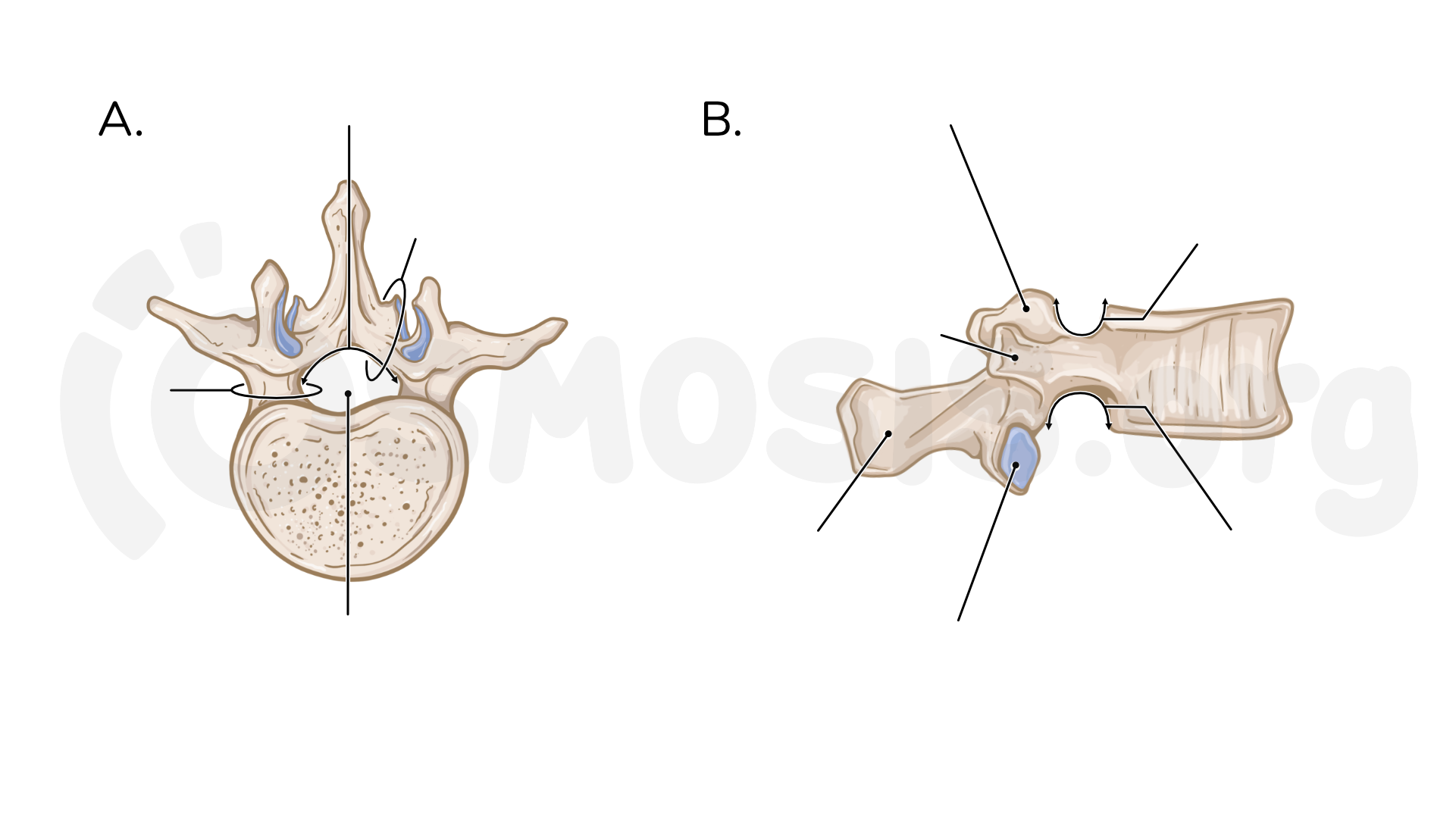 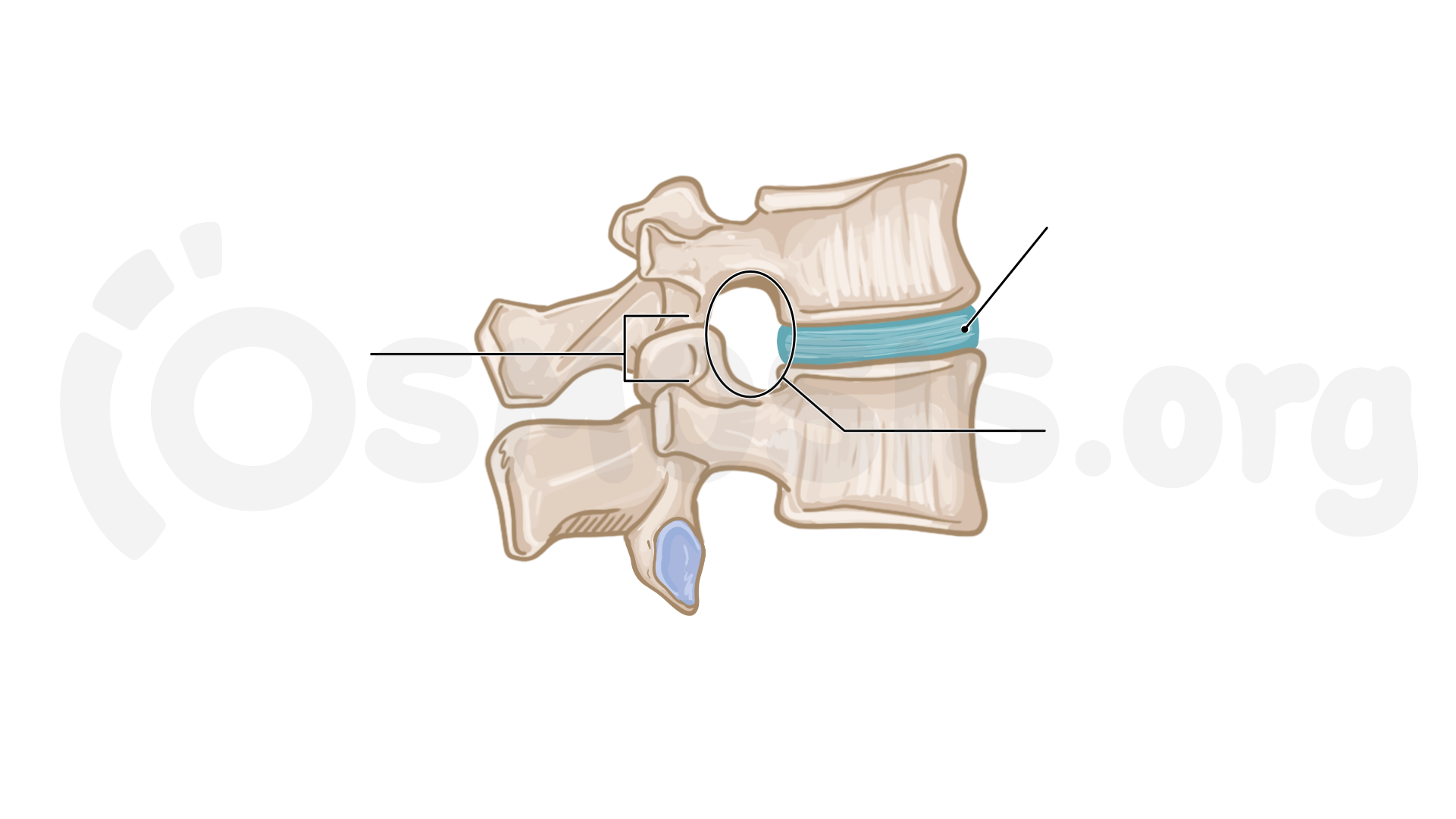 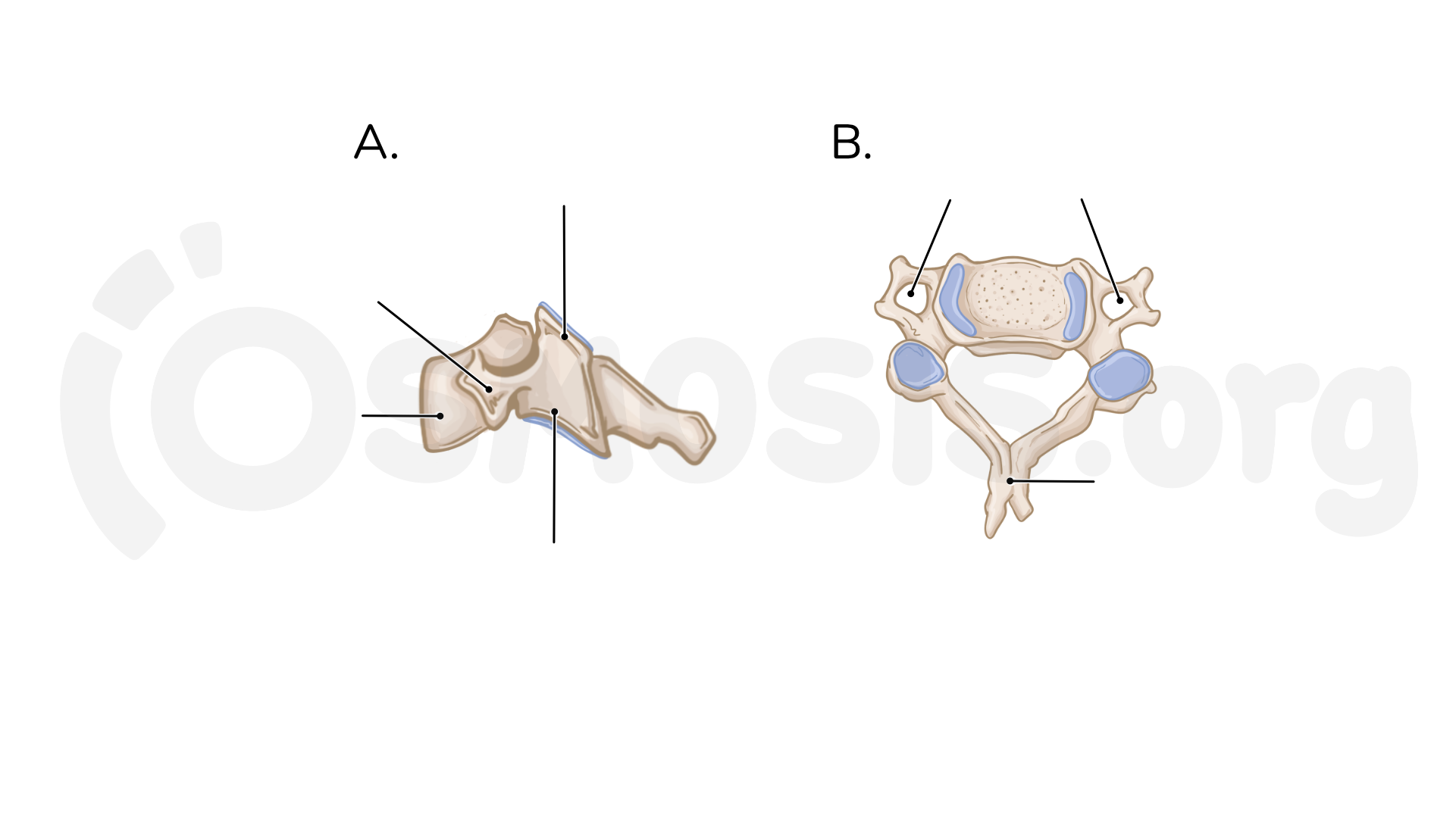 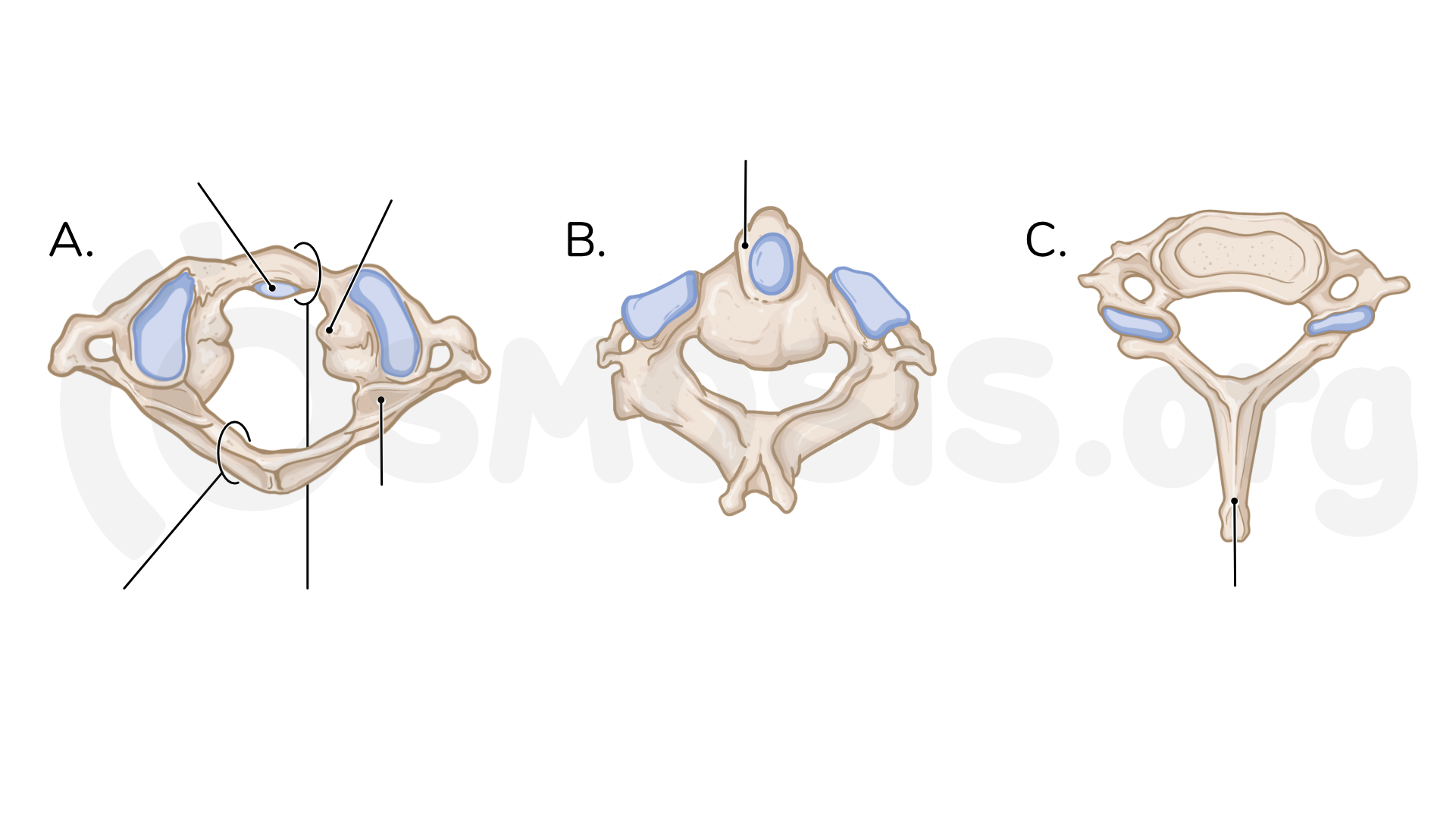 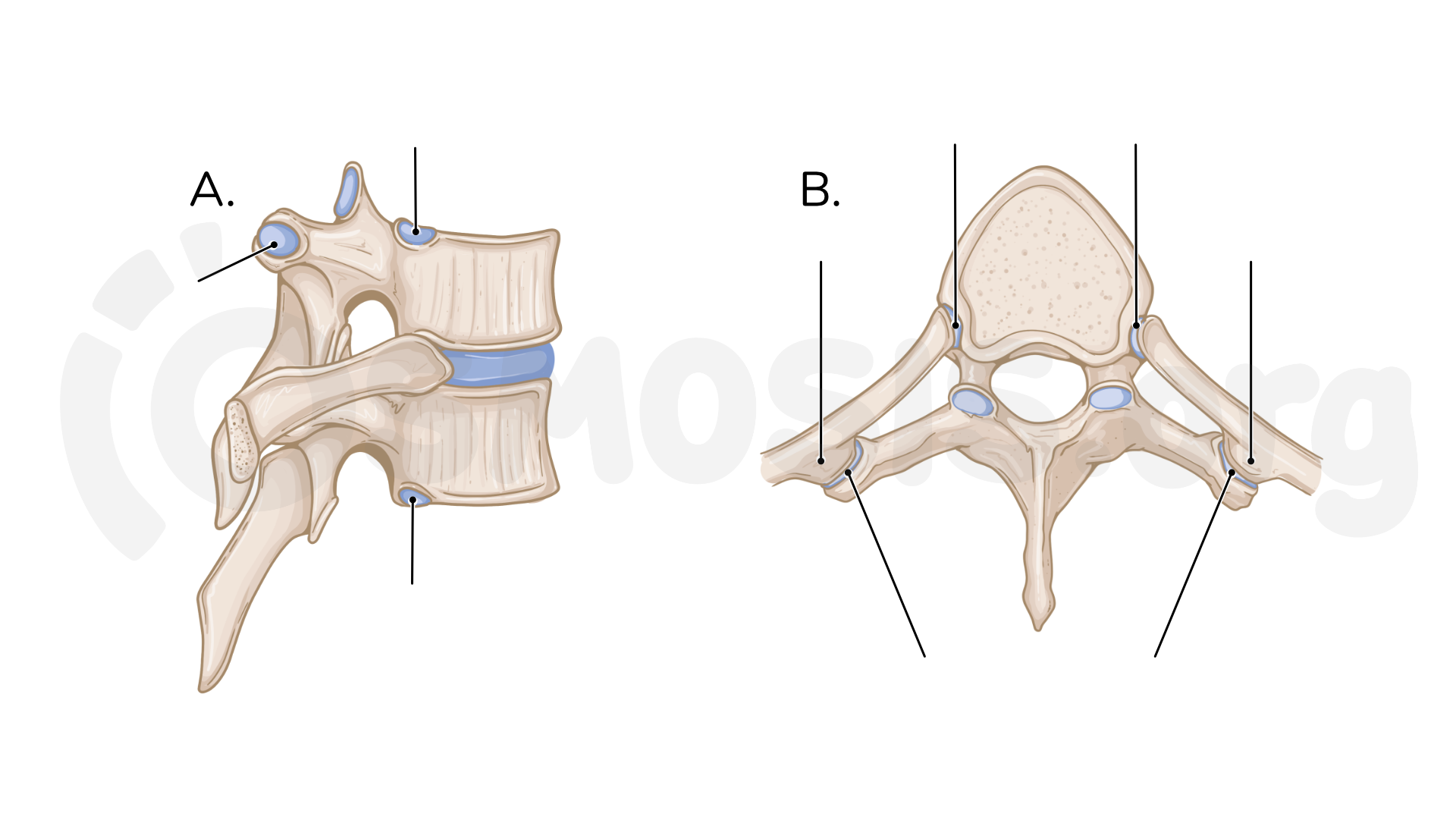 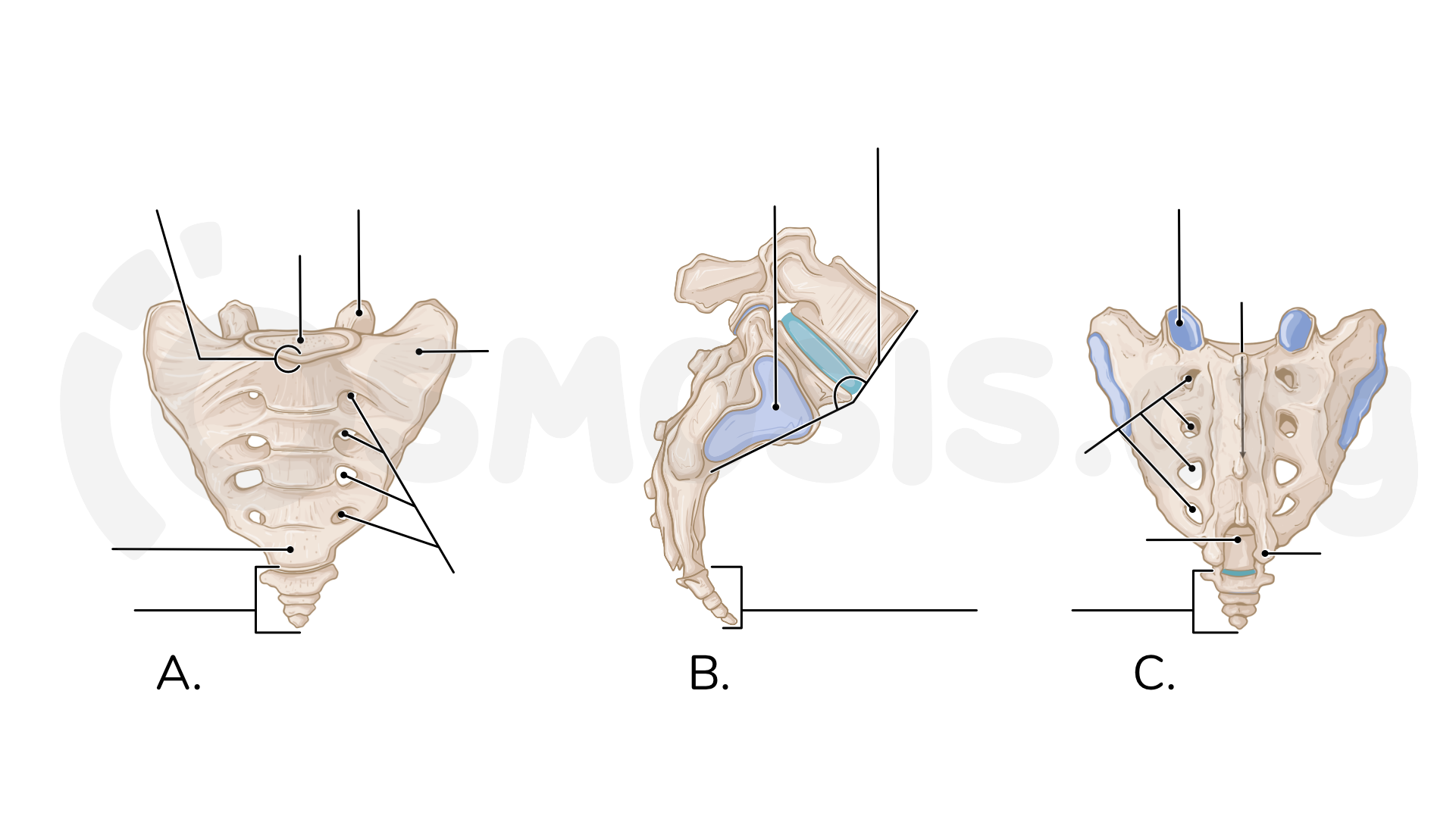 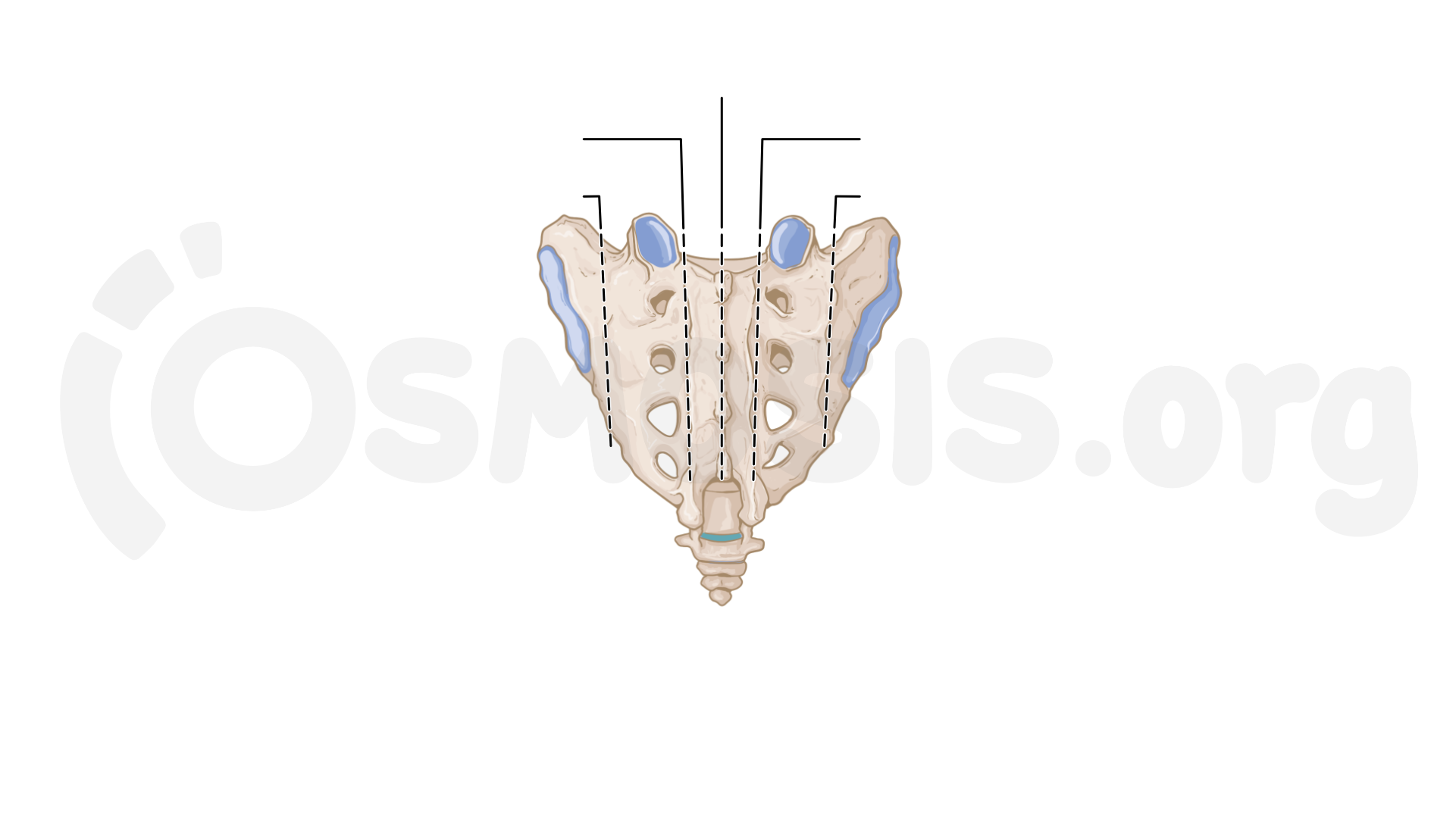 The vertebral column, commonly referred to as the spine or spinal column, consists of 33 vertebrae organized in 5 main regions: 7 cervical, 12 thoracic, 5 lumbar, 5 sacral, and 4 coccygeal.

The vertebrae come in different shapes and sizes, and they have unique features depending on their region.

Typical vertebrae have a basic structure in common, consisting of a vertebral body, a vertebral arch, and 7 processes: a spinous process, 2 transverse processes, and 2 superior and 2 inferior articular processes.

The vertebral body is the thick, cylindrical, anterior portion of the vertebra, which functions in supporting weight.

As you move down the spine the vertebral bodies become larger, as they bear more weight.

And when you stack all the foramina on top of each other, that forms the vertebral, or spinal, canal, which forms a protective bony case around the spinal cord.

Focusing on the 7 processes of the vertebrae, first we have the spinous process, which extends posteriorly from the midline junction of the laminae and serves as an attachment site for ligaments and muscles.

Next, the left and right transverse processes, they extend posterolaterally from the junctions of the pedicles and laminae, while also serving as important attachment sites for ligaments and muscles.

Next are the left and right inferior articular processes, which project inferiorly from the junctions of the pedicles and laminae.

So, let’s look at the articulation between two typical vertebrae from a lateral angle. The superior and inferior articular processes of each vertebra allow articulation with adjacent vertebrae via their articular facets.

The facet joints help keep the vertebrae properly aligned, while also allowing movement of the vertebral bodies. Furthermore, their orientation differs throughout the vertebral column.

This allows for different movements of the vertebral bodies in the cervical, thoracic, and lumbar regions.

The vertebral bodies of typical cervical vertebrae are smaller than the other regions, are wider from side to side, and have a concave superior surface and a convex inferior surface.

The lateral edges of the superior surface of the vertebral bodies are each called the uncus of the body, or the uncinate process.

Now, what really makes cervical vertebrae stand out is that they have a foramen transversarium, or transverse foramen, which is an opening on each of the transverse processes.

It's through these foramina that the vertebral arteries and corresponding veins pass.

The lateral ends of the transverse processes have two projections, an anterior tubercle and a posterior tubercle, which are attachment sites for the levator scapulae and scalene muscles.

The vertebral foramen of the cervical vertebrae is large and triangular shaped to accommodate the cervical enlargement of the spinal cord to fit through it.

The facets on cervical vertebrae are nearly horizontal and, as such, allow for the most movement of all the vertebral regions.

This allows adjacent cervical vertebrae to sit nicely upon each other. The main movements the facet joints allow in the cervical region are: free flexion and extension, some lateral flexion, and limited rotation.

The spinous processes of the cervical vertebrae are short, where typically C2-C6 are bifid, meaning they have two protrusions at the posterior end that project posterolaterally.

But let’s not forget about the atypical cervical vertebrae! First, the C1 vertebra, also called the atlas, is a ring shaped bone that doesn’t have a body or a spinous process.

So, instead of a body, it has paired lateral masses that serve as a body and sustain the weight of the globe-like cranium just like Atlas of Greek mythology, who bore the weight of the literal world on his shoulders.

The transverse processes of the atlas arise from the lateral masses, so these processes are placed more laterally than those of the inferior vertebrae. This makes the atlas the widest of the cervical vertebrae.

These surfaces articulate with two large cranial protuberances on either side of the foramen magnum on the occipital bone, called the occipital condyles,to form the atlanto-occipital joint.

The transverse ligament extends from one lateral mass to the other lateral mass on the atlas, passing between the spinal cord and the dens, which is a part of the C2 vertebra.

Speaking of which, the C2 vertebra is also called the axis, because it has a blunt tooth-like dens - or odontoid process.

The dens projects superiorly and articulates with the posterior surface of the anterior arch of the atlas, and it’s held in place by the transverse ligament.

Next, C2 also has two large, flat weight-bearing surfaces called the superior articular facets on which the atlas rotates.

It also has inferior articular processes, and transverse processes similar to the other cervical vertebrae.

Finally, C7, has a smaller transverse foramen than the other cervical vertebrae, and it is also called the vertebra prominens due to its long spinous process.

In most people it is the most prominent spinous process, and you can actually feel it if you run your finger and press along the midline of the back of your neck!

Okay. I prominens we’re done articulating the multi-faceted details of the cervical vertebrae for now.

Take a moment to see if you can recall the key structures of the typical and atypical cervical vertebrae.

All right! Next up are the thoracic vertebrae, which are located in the upper and middle back, between the cervical and lumbar vertebrae.

They are intermediate in size, though they do get bigger further down the vertebral column.

On quick glance, an easy way to identify the thoracic vertebrae is from a posterior lateral view, where they look like a giraffe!

This is compared to the lumbar vertebrae which we will talk about shortly, which look like a moose!