Assessments
Anatomy of the ventricular system

Anatomy of the Ventricular System 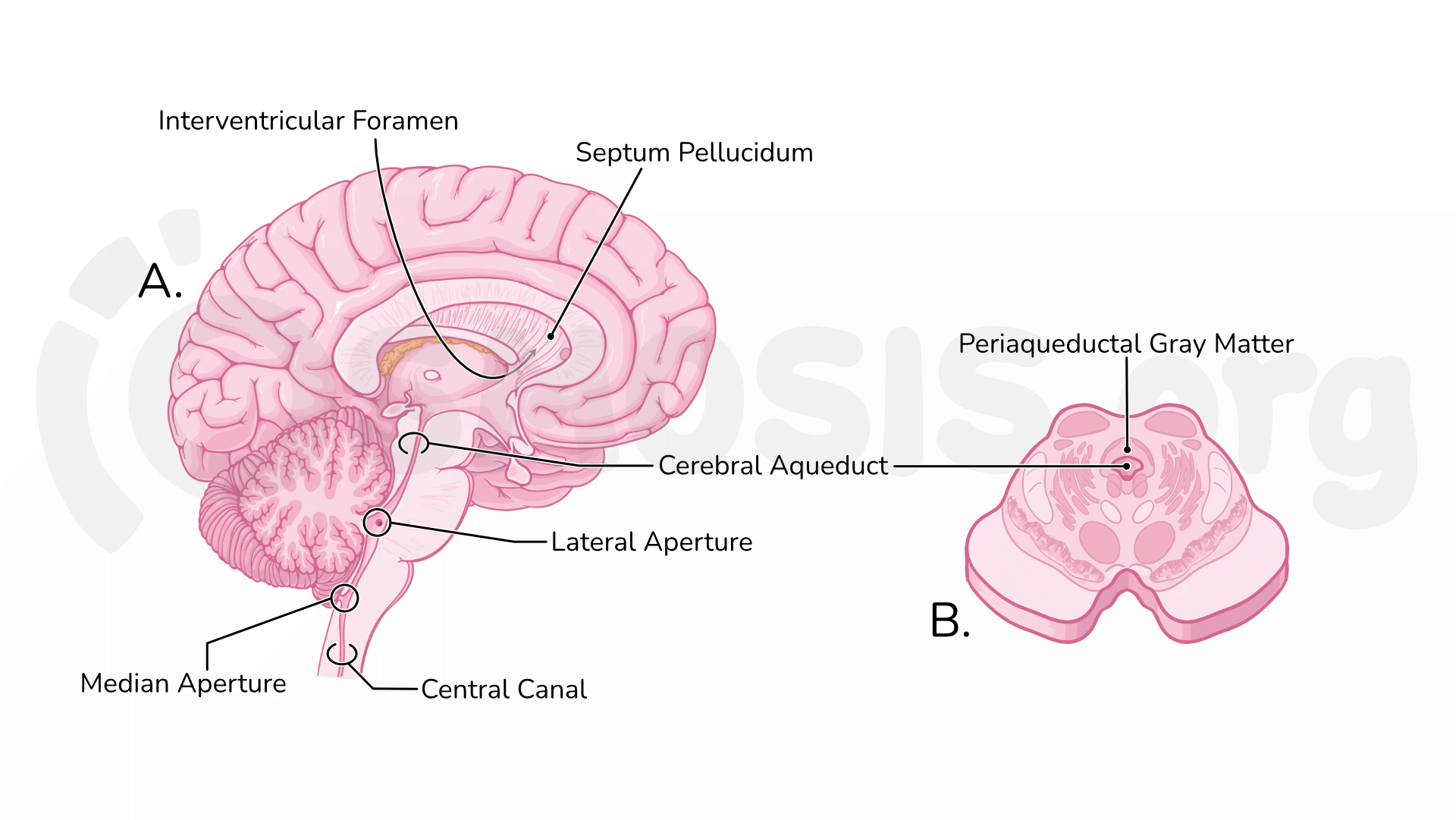 Figure 1. A. Midsagittal section of brain. B. Transverse section of midbrain. 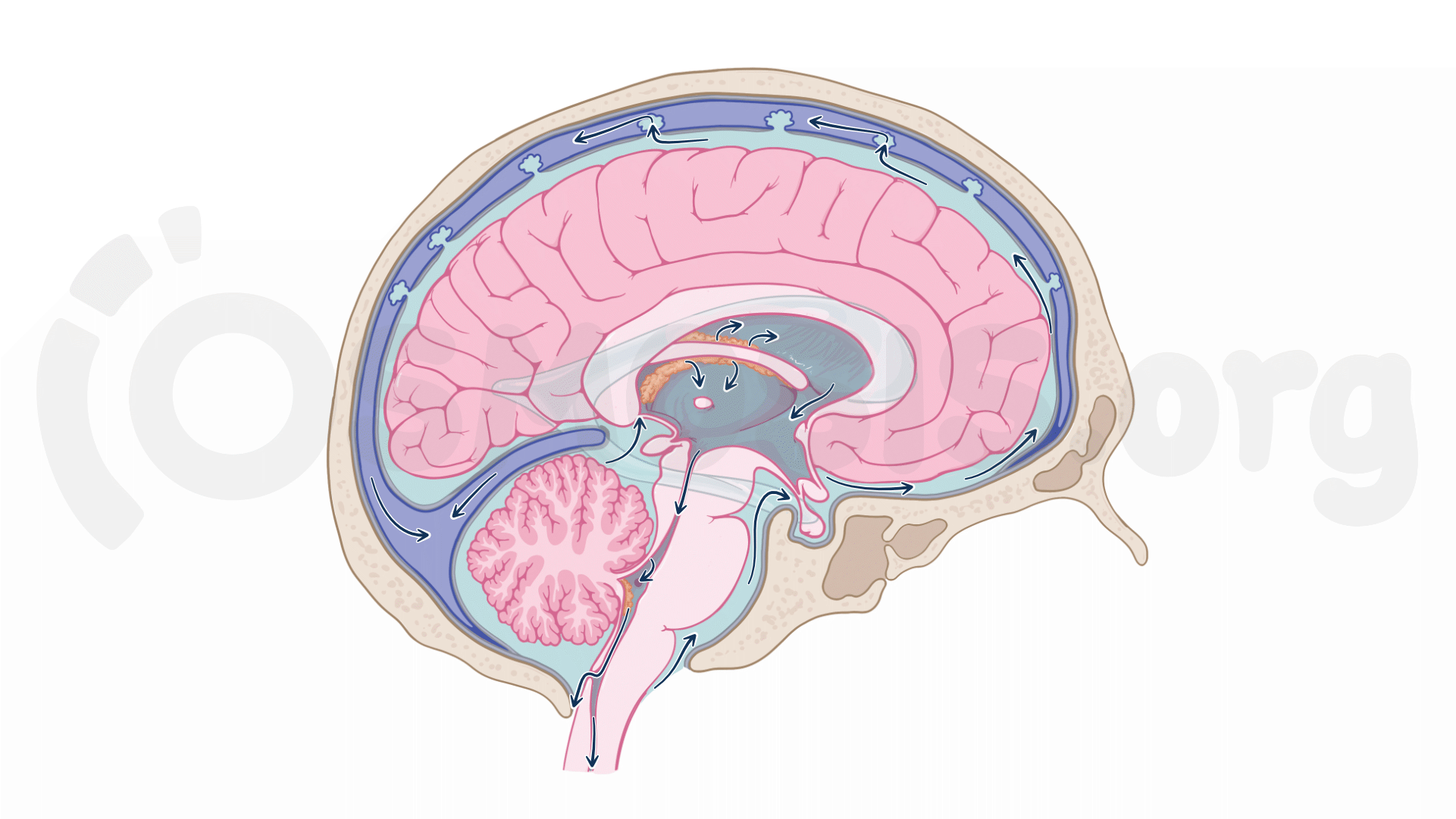 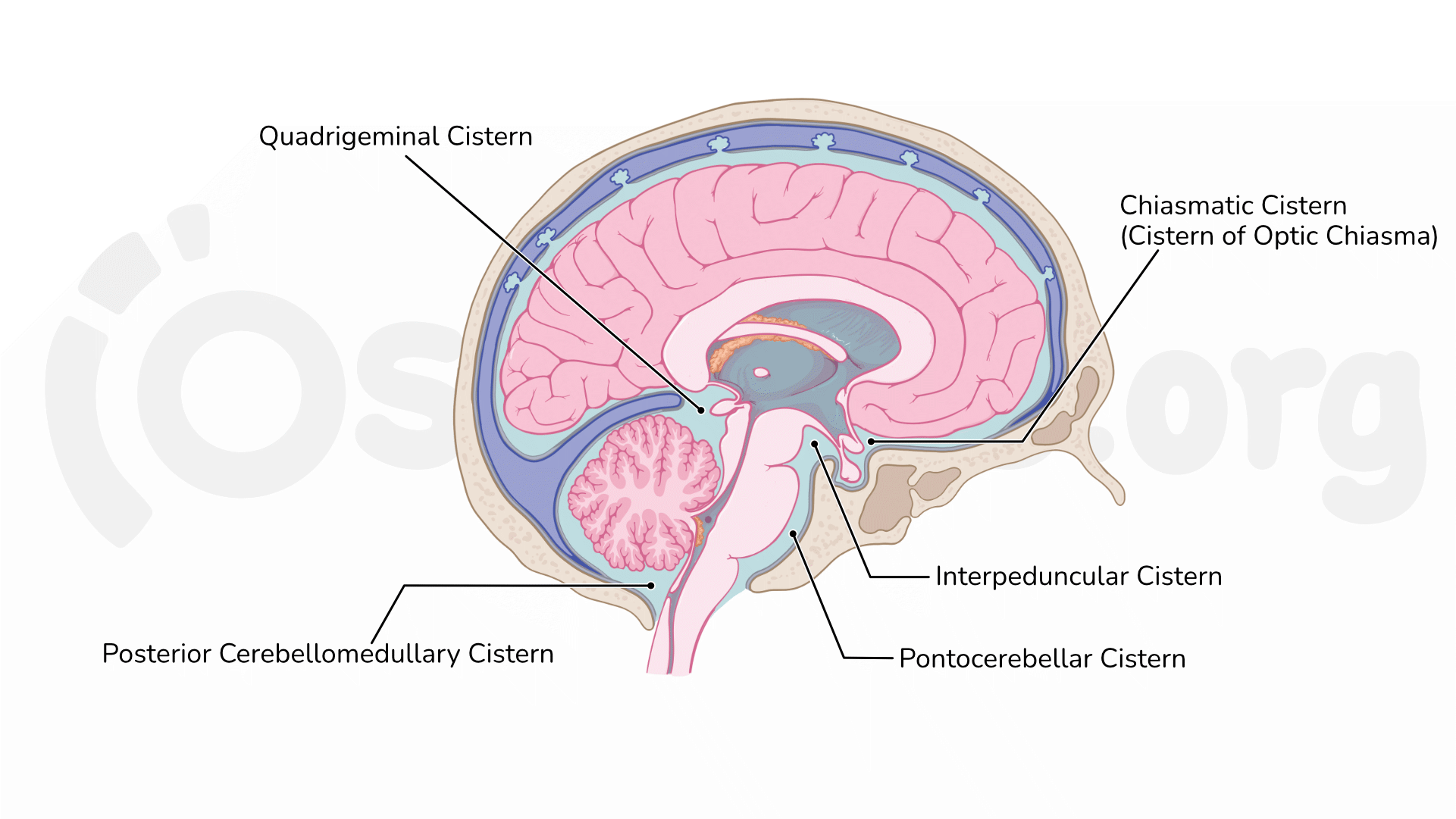 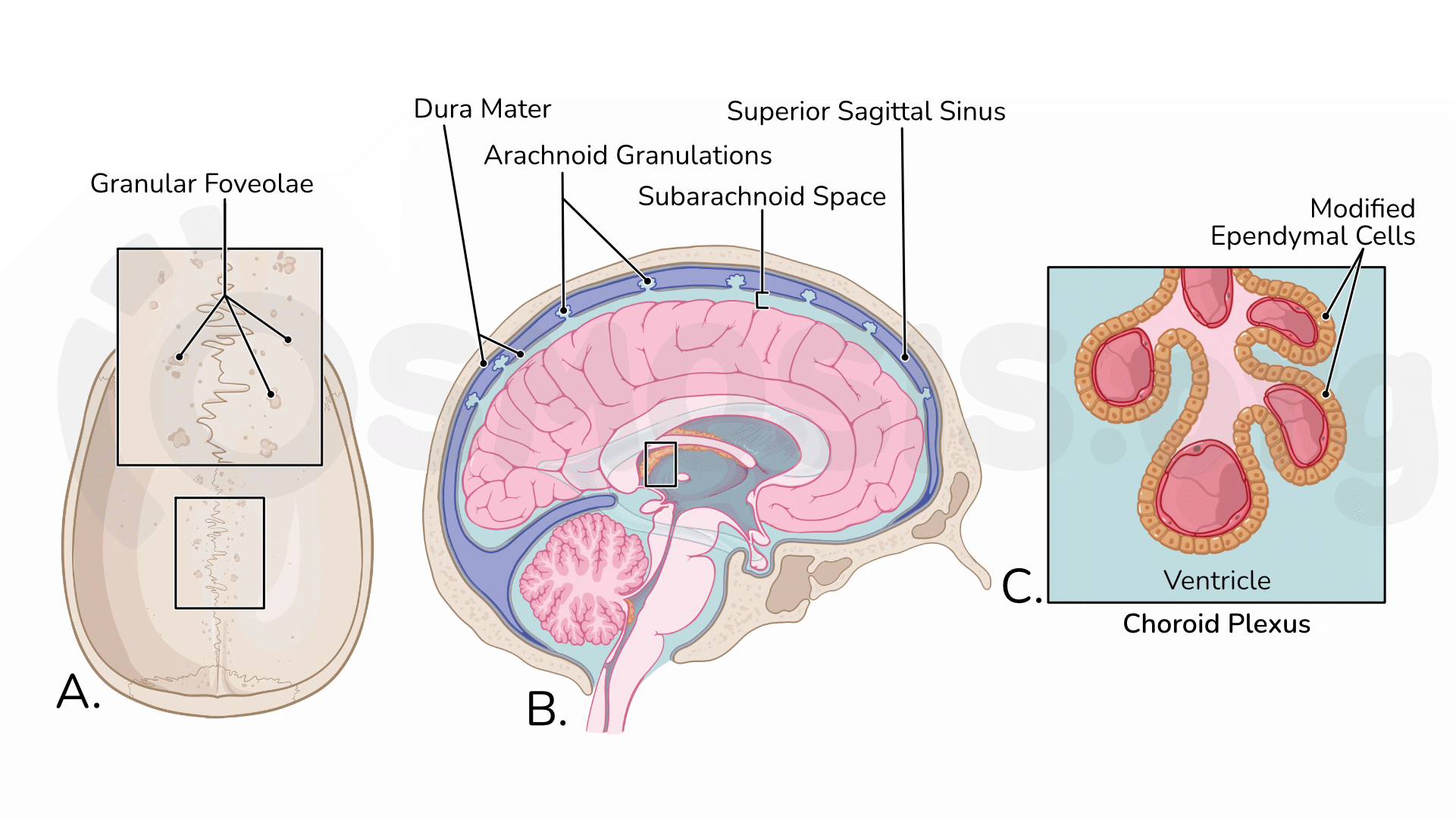 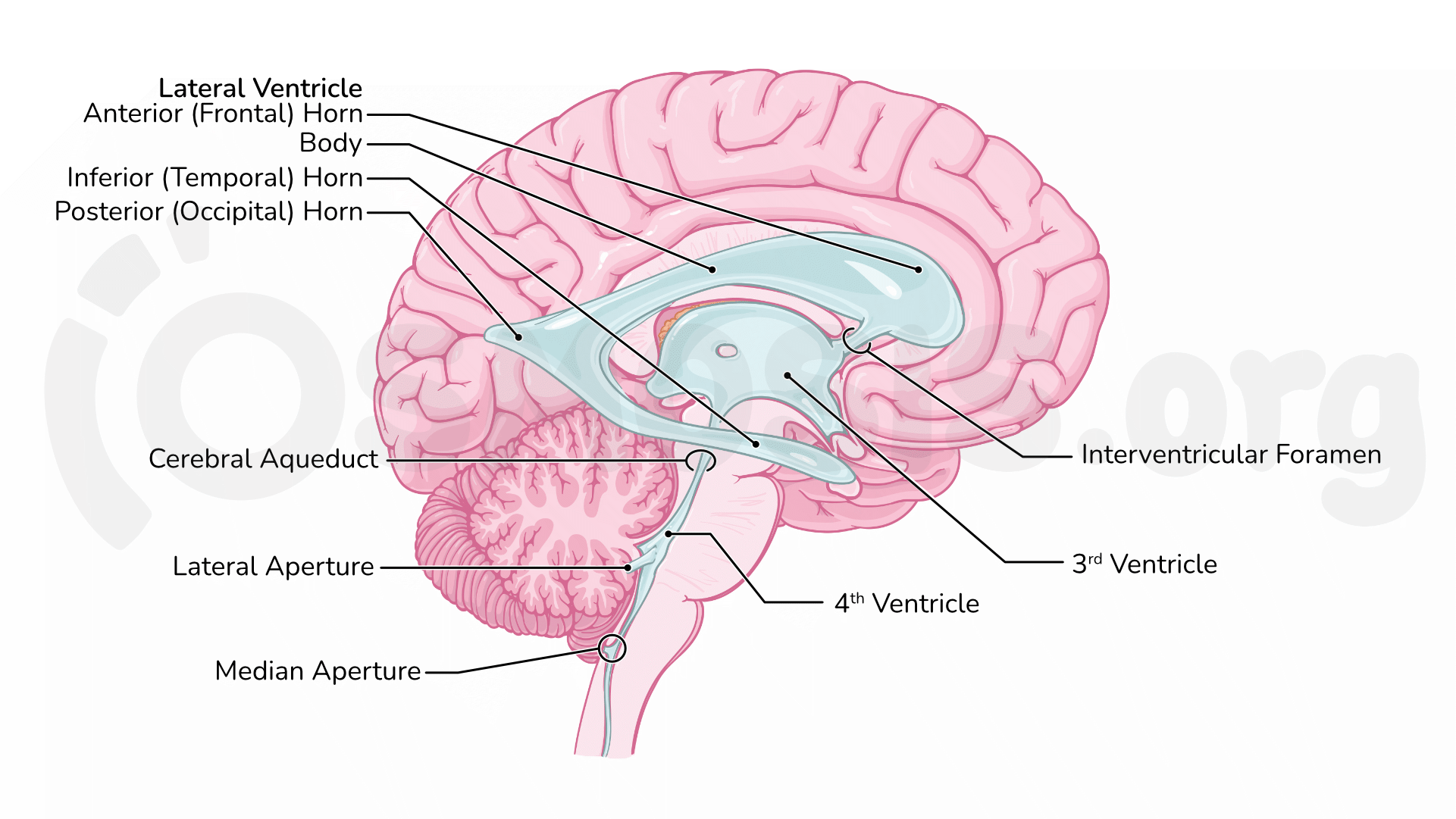 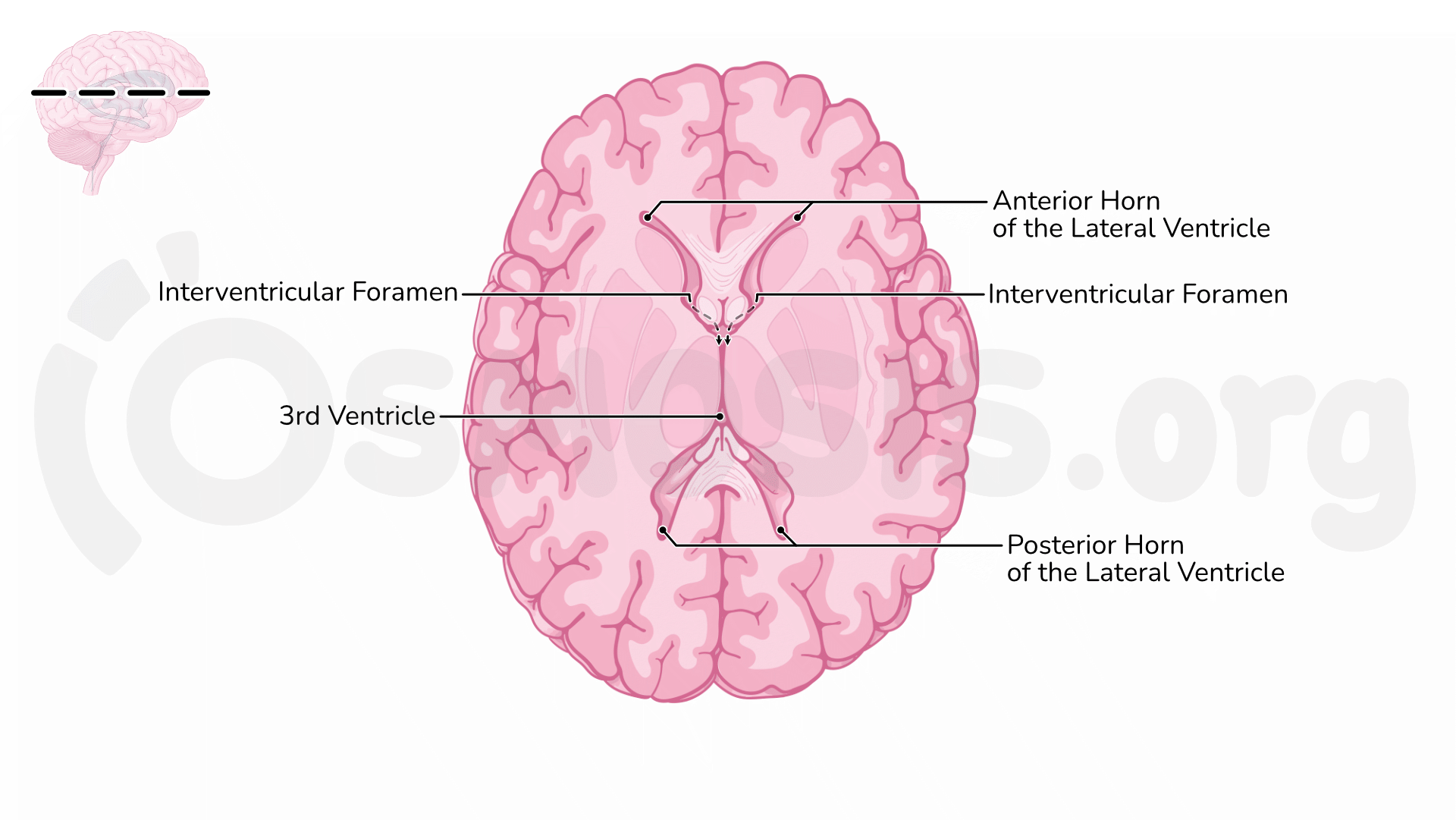 Figure 6. Transverse section at the level of the interventricular foramina. 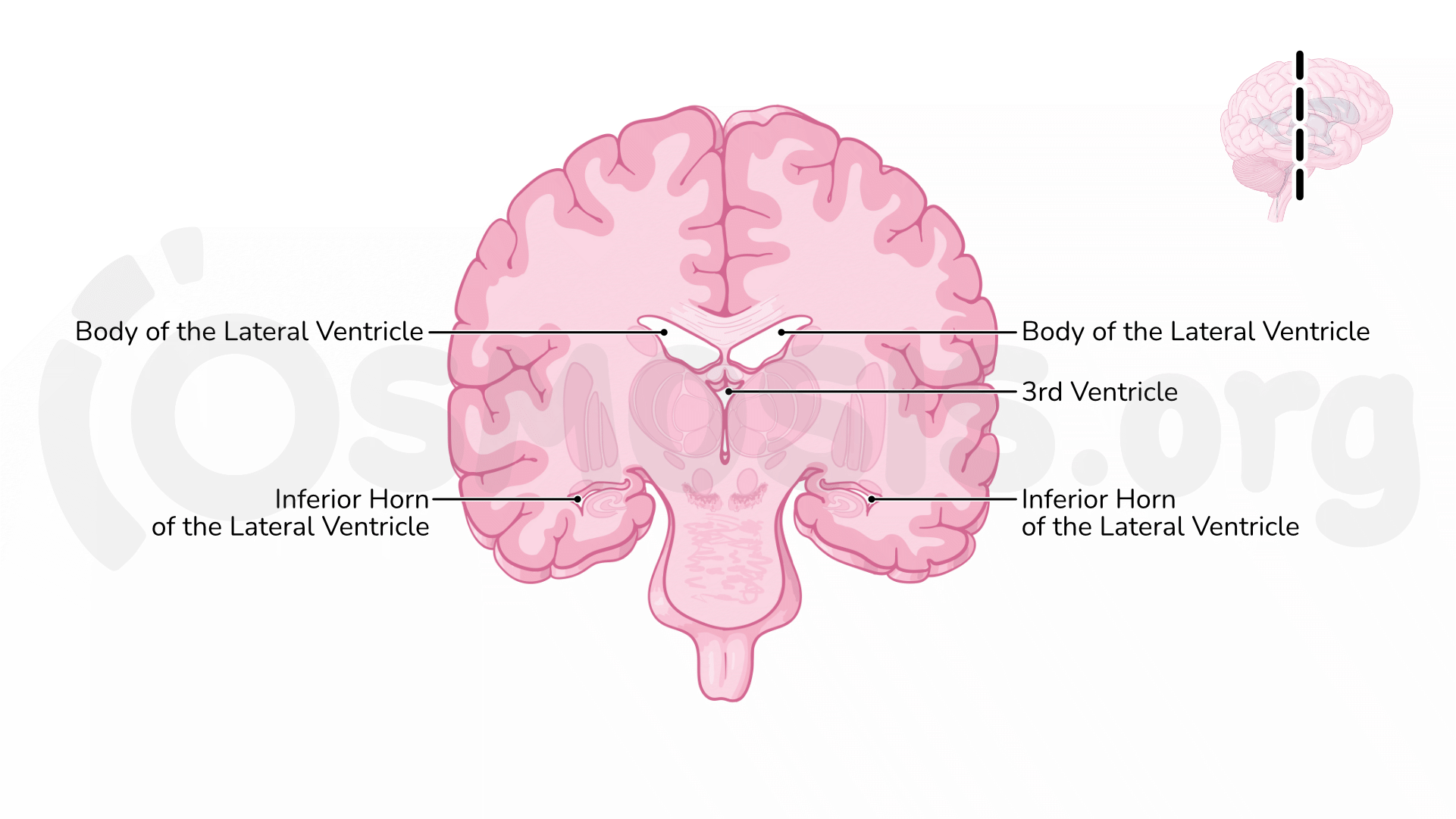 Figure 7. Coronal section at the level of the red nucleus. 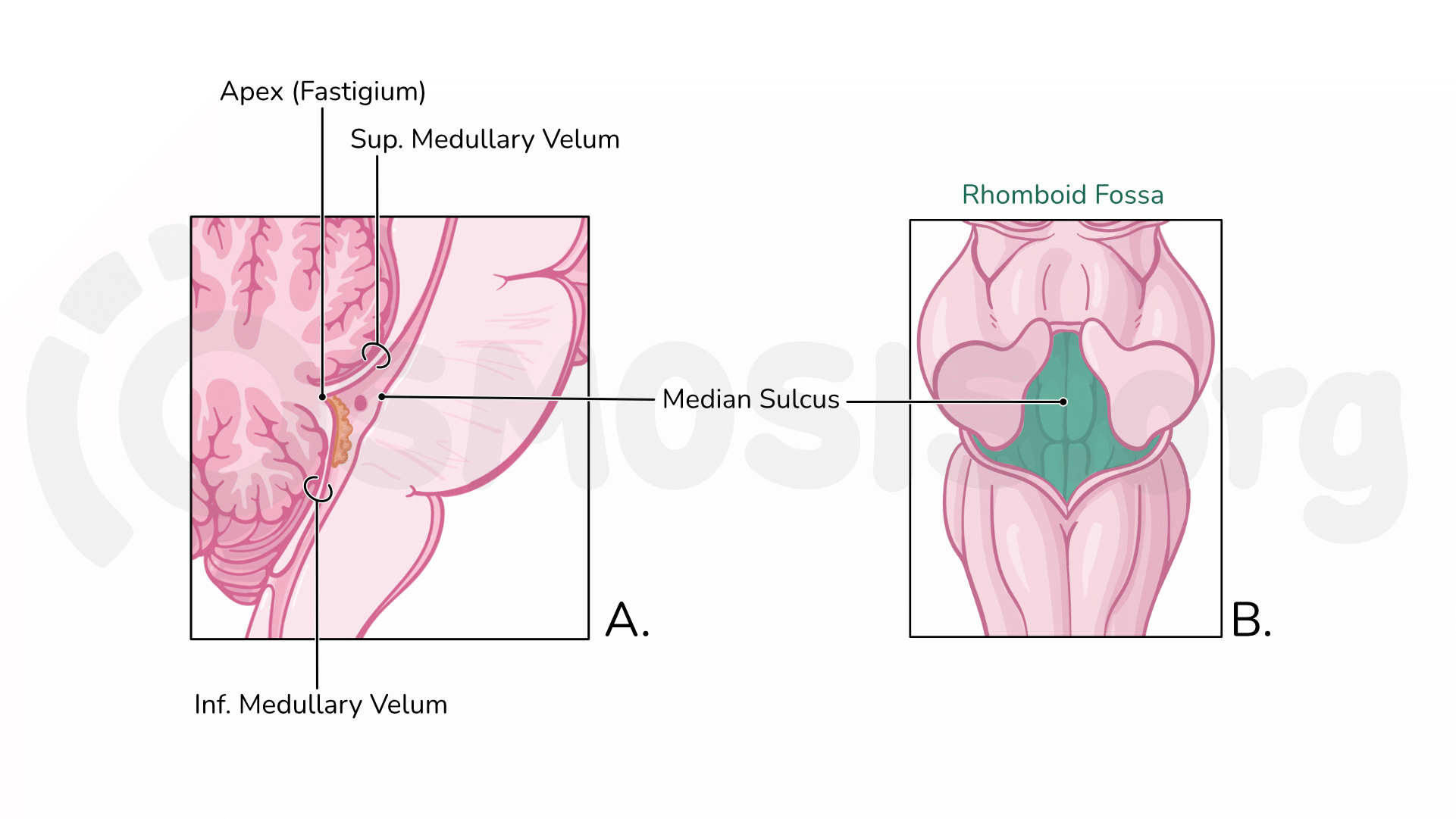 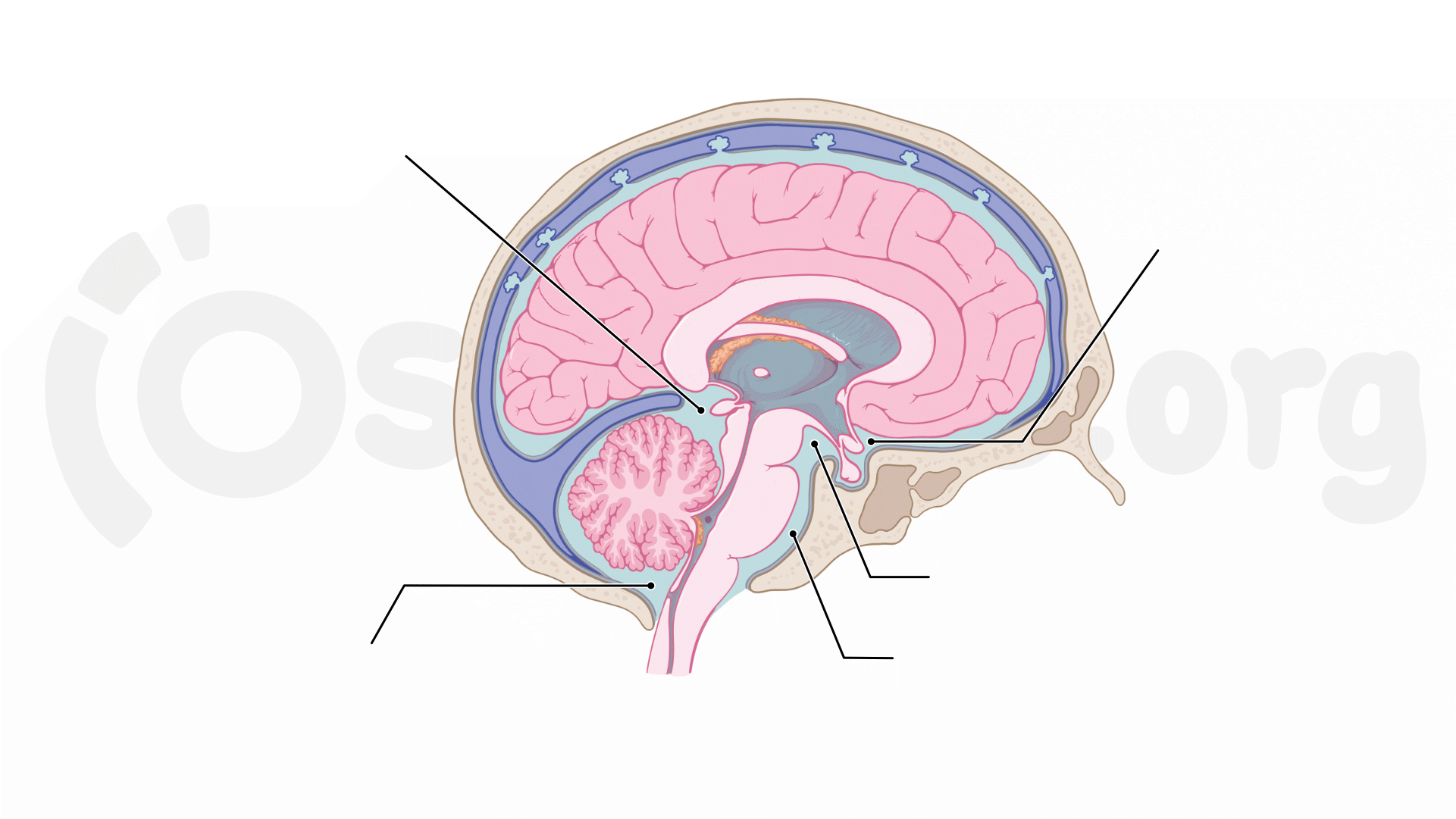 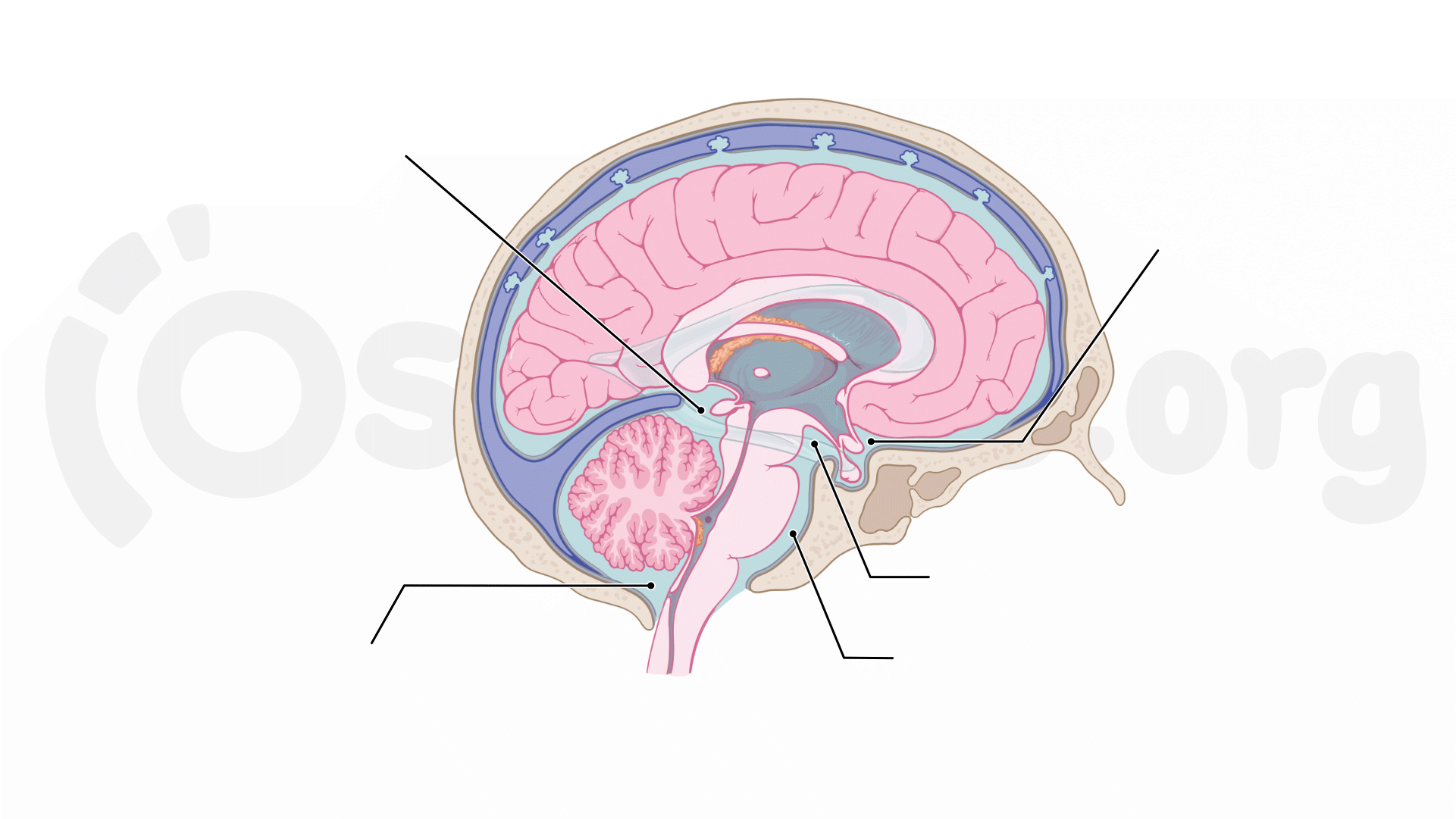 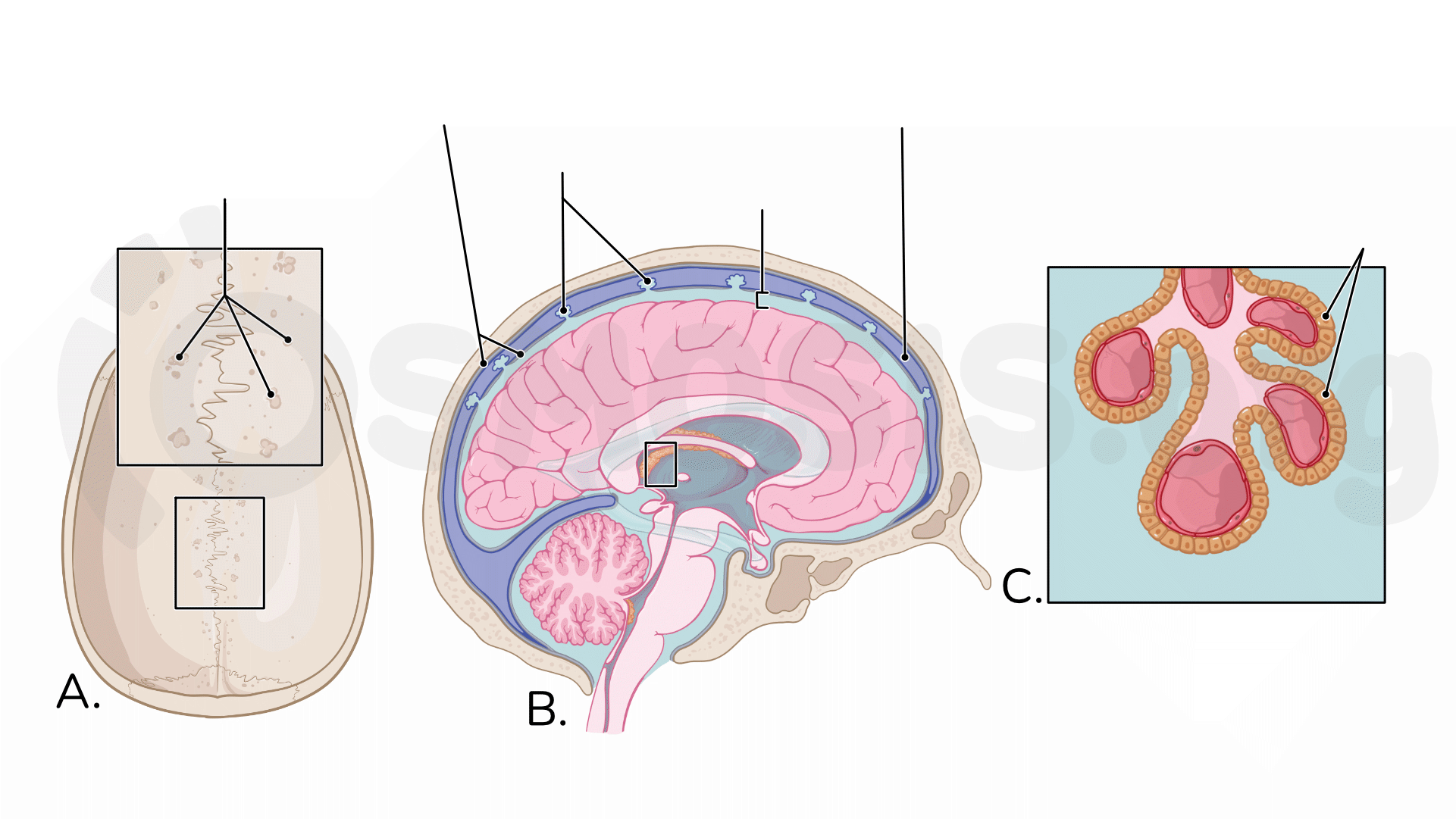 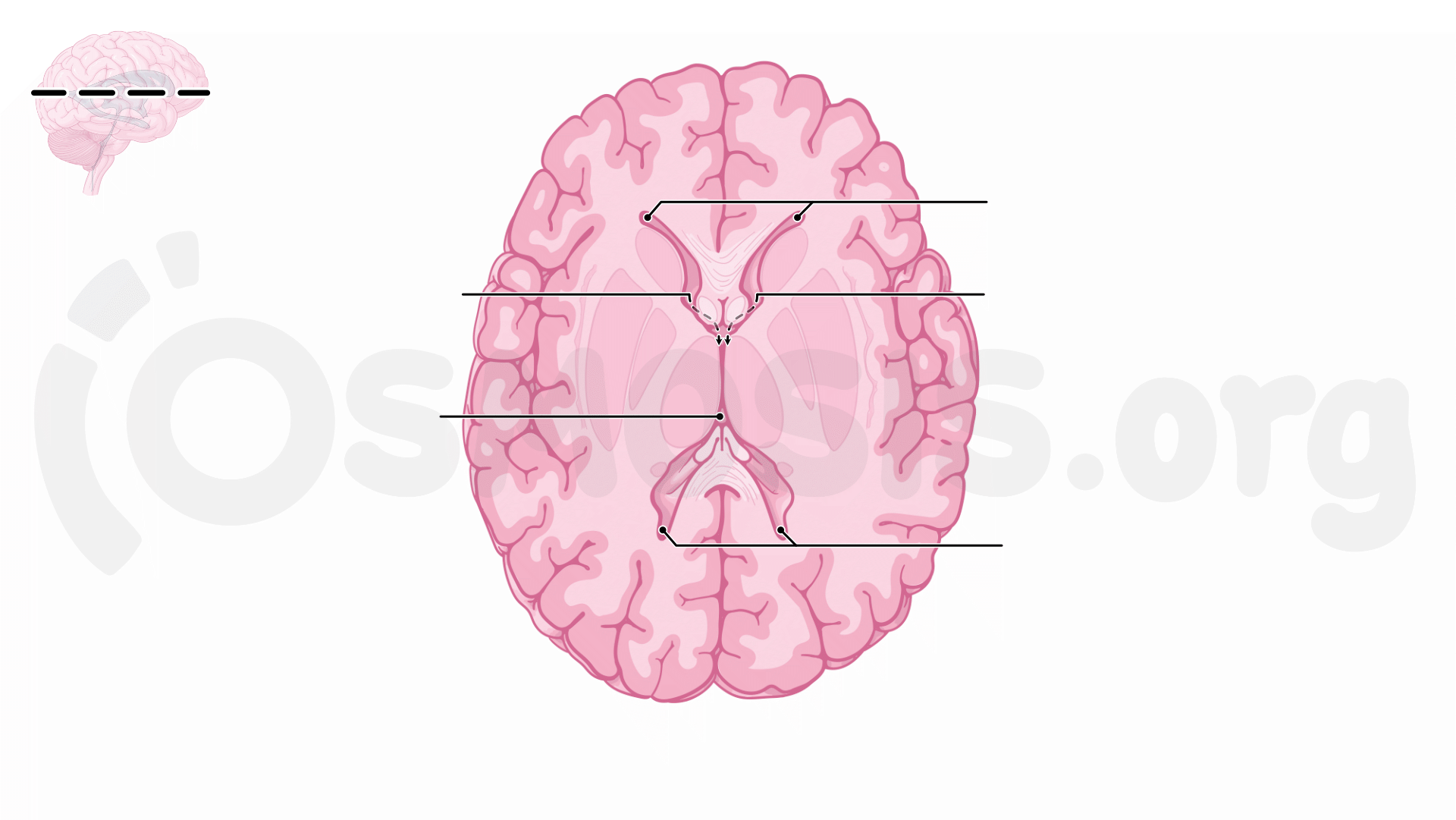 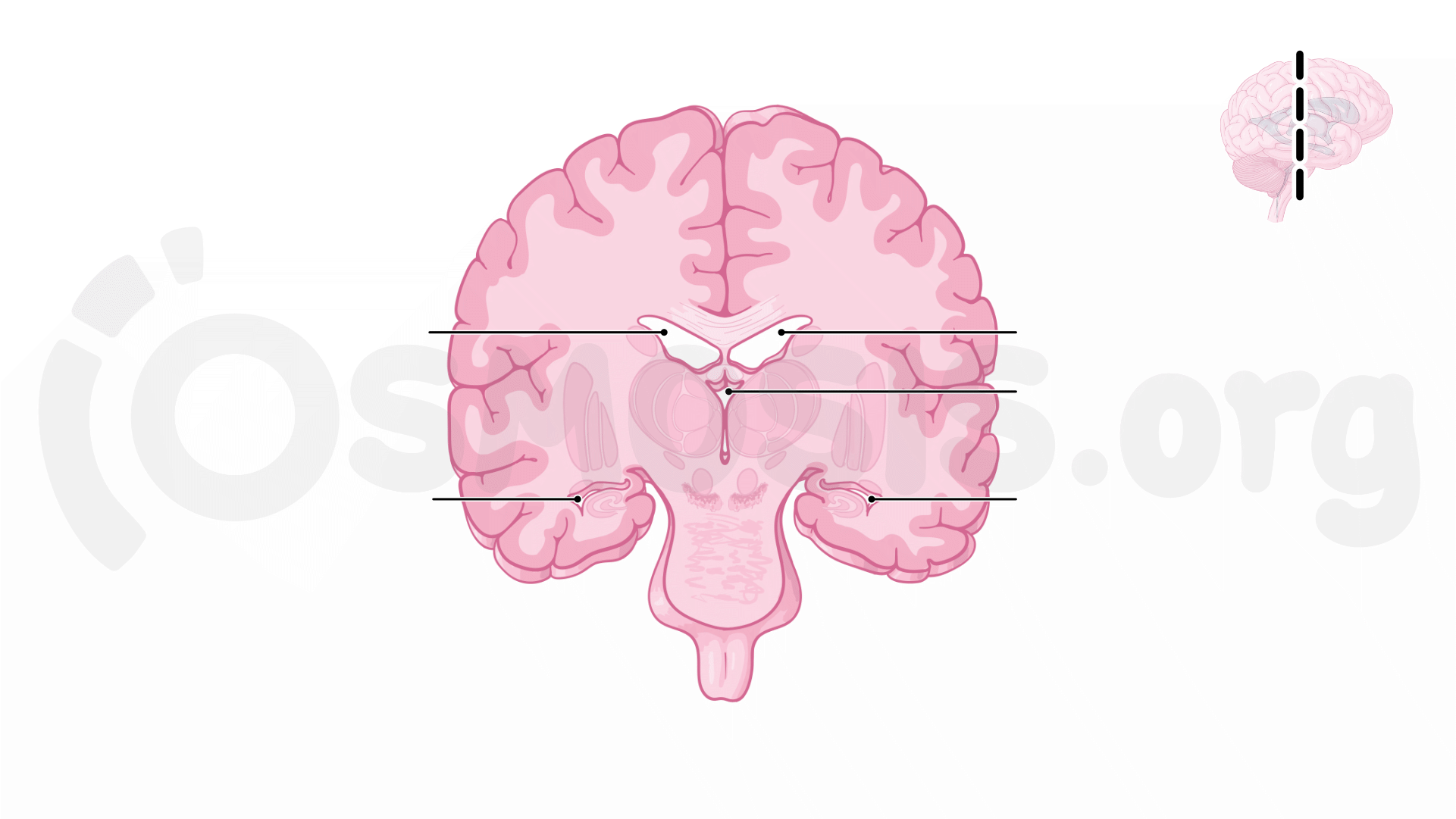 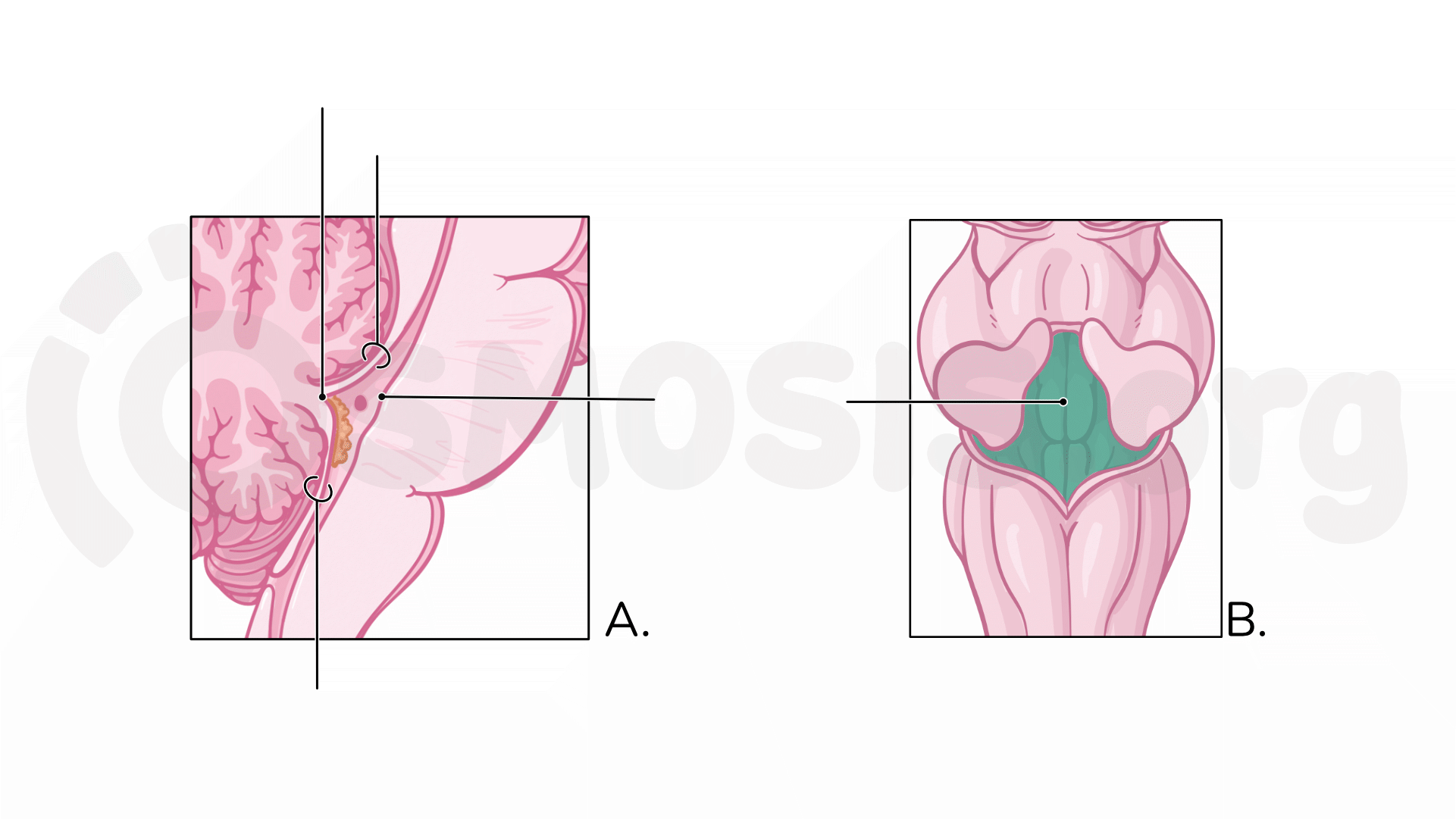 A group of investigators is studying the pathway of cerebrospinal fluid (CSF) flow in the ventricular system. Which of the following best describes the direction of CSF flow?

An adult human brain weighs about 1.5 kgs, but we don’t really feel it weighing us down!

That’s because the brain is cushioned by cerebrospinal fluid or CSF, which can be found within brain cavities called ventricles.

These cavities are involved in the production, transport and removal of CSF, and they are connected to each other. So, as a whole they are often referred to as the ventricular system of the brain.

CSF doesn’t only fill the ventricles, but also the subarachnoid space, which surrounds the brain and spinal cord. This way, CSF cushions and protects the brain from head trauma, and it also provides buoyancy so that the brain doesn’t compress blood vessels and cranial nerve roots against the cranium. It also provides protection against sudden intracranial pressure changes.

It can also transport hormones, and

influence the brain's excitability by regulating its ionic composition. .

CSF flows from the lateral ventricles through the left and right interventricular foramina, also called the foramina of Monro, to the third ventricle.

From here, it passes through the cerebral aqueduct to reach the fourth ventricle. CSF can then flow caudally into the central canal of the spinal cord.

The fourth ventricle also has two lateral apertures, called the foramina of Luschka,

and a median aperture, called the foramen of Magendie, both of which allow CSF to reach the subarachnoid space.

The lateral ventricles are the largest. They occupy both cerebral hemispheres, and they’re present all four lobes, This is best seen on coronal sections of the brain,

cutting through the frontal lobe,

the parietal lobe, and temporal lobes,

and finally the occipital lobe.

Between the cerebellum and the medulla, there is the posterior cerebellomedullary cistern, also known as cisterna magna. It receives CSF from the foramen of Magendie, and can even be accessed for obtaining a CSF sample in some rare cases.

On both sides of the cisterna magna, there are two lateral cerebellomedullary cisterns that can’t be seen in this section. They receive CSF from the foramina of Luschka and contain cranial nerves seven and eight.

Then, ventral to the pons, there is the pontocerebellar, or pontine cistern, which contains the basilar artery and continues inferiorly into the spinal subarachnoid space.

Next is the, or basal cistern, which sits between the cerebral peduncles of the midbrain.

and the roof of the third and fourth ventricles.

As CSF flows from the ventricles to the subarachnoid space, it continues superiorly to reach the superior sagittal sinus, which is a channel between two layers of dura mater that holds venous blood. The arachnoid mater forms small protrusions, called arachnoid villi, that penetrate the dura and enter the sinus. The subarachnoid space extends into these villi, which are therefore filled with CSF. The CSF then passes through the thin lining of the villi and drains into the venous system to be recycled.

Interestingly, the villi tend to group together and form arachnoid granulations.

You can even see the impressions of these granulations, called the granular foveolae, on the inferior surface of the calvaria.

Okay, now let’s look at each ventricle in a bit more detail. First up, the lateral ventricles! Each of them is shaped like the letter C, and they each have a body, or a central part, and three horns, the anterior horn, posterior horn and inferior horn, also called the frontal, occipital and temporal horns, respectively.

To begin, there’s the body of the lateral ventricle,

and can be found deep within the parietal lobe.

The body of the lateral ventricle has a distinct roof, a floor and a medial wall. On a coronal section of the brain, you can see that the roof is formed by the inferior surface of the corpus callosum.

The floor, on the other hand, from medial to lateral, is formed by the fornix, choroid plexus, lateral part of the dorsal side of the thalamus and the caudate nucleus.

Medially, the septum pellucidum extends from the corpus callosum to the fornix, separating the left and right lateral ventricles.

On more caudal coronal sections, the septum pellucidum slowly disappears as the corpus callosum and fornix come closer together.

Rostrally, the body connects to the interventricular foramina, which can be seen on a transverse section of the brain.

Each interventricular foramen is bounded by the anterior column of the fornix, rostrally, and the anterior aspect of the thalamus caudally.

As we follow the body of the lateral ventricle caudally we see that it stretches along the medial aspect of the body of the caudate nucleus and eventually becomes continuous with the posterior and inferior horns.

If we look at a three quarter view of the brain,

And remove the cerebrum

We can see how the body of the lateral ventricle curves around the thalamus,