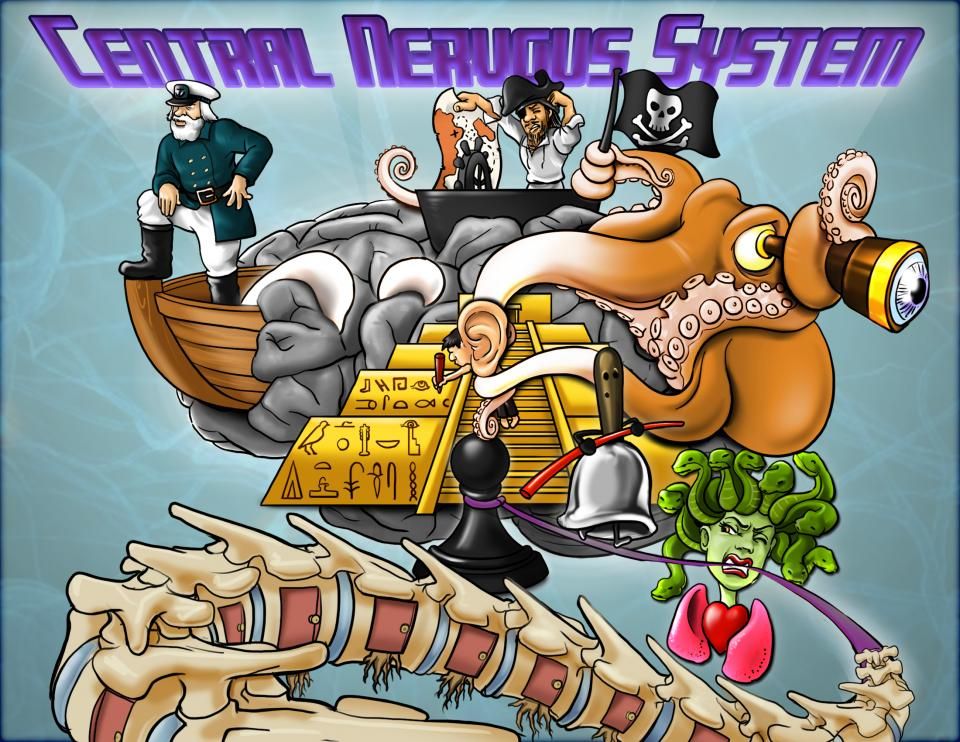 The smell of a morning coffee, the memory of last christmas, and the pain of touching a hot surface. That’s your nervous system at work!

The nervous system allows each body system to communicate with each other, and monitors internal and external changes to build a proper response that keeps us alive and kicking!

Both the CNS and the PNS are made up of the functional units of the nervous system, called neurons or nerve cells.

These cells have many parts, with the main part being the cell body, which houses the nucleus of the cell.

From the cell body arise two types of extensions: dendrites, which are short projections and may be numerous, and an axon, or nerve fiber, which is a single long extension that looks like a thread.

Now, neurons are special because they’re able to receive and send electrical impulses that allow for communication with other neurons, as well with effector cells, like muscle cells.

This process starts at the dendrites, which receive electrical signals from other neurons and convey it towards the cell body. Then, the cell body produces an electrical impulse and sends it through its own single axon.

Many axons are covered with a layer of lipids and proteins that speed up the conduction of these impulses, called the myelin sheath.

Now, the electrical impulse eventually reaches the distal parts of an axon, called the axon terminals.

Here, an axon terminal can meet up with a dendrite of another neuron, and this contact site is called a synapse which facilitates the communication between neurons.

Now, there are a few types of neurons that are structurally different from one another. Neurons that have two or more dendrites and a single axon, like the one we just described, are called multipolar neurons.

They’re the most common type of neurons in the entire nervous system; for example, almost all motor neurons that control voluntary muscles in the body are multipolar neurons.

Other types of neurons include bipolar and pseudounipolar neurons. Bipolar neurons are neurons with a cell body that has a single dendrite on one side and a single axon on the other side.

These cells often act as sensory neurons, meaning that they relay sensory input to the central nervous system.

An example would be the bipolar cells at the roof of the nasal cavity, which aid in the transmission of special sensory information or our sense of smell to the brain.

Lastly, are pseudounipolar neurons, which have a short seemingly single, but actually double process that extends from the cell body.

So, an electrical impulse that is generated at a receptor, like touch or pain receptors in the skin, travels through the peripheral process and then continues into the CNS through its central process.

Alright, let's take a quick break o see if we can identify the different types of neurons. Great! Now neurons are a bit like humans, they always need someone for support, and that’s where neuroglia come in.

Neuroglia, or glial cells, are the only other cell type found in the nervous system and, although there are several different types of neuroglia, they all function in some way to support and nourish neurons.

These cells are smaller than neurons, but fun fact; there are five times as many glial cells as there are neurons in the body!

Alright, now let’s switch gears and discuss the central nervous system, which consists of the brain and spinal cord.

The main role of the CNS is to coordinate and integrate neuronal signals from the periphery as well as perform higher-order functions like learning.

Now, there is important terminology used when discussing different parts of the CNS. Let’s start with talking about gray and white matter.

Let’s look at a coronal section of the brain. Note that the brain tissue has two different coloured areas. Gray matter forms the outer portion of the brain, and is the place where neuron cell bodies are found.

Remember that axons are typically covered with a myelin sheath that is made up of lipids; so this is what gives white matter its lighter appearance.

Now, the spinal cord also has gray and white matter, but, from a transverse section, we can see that their organization is the other way around.

Also, a group of neuronal cell bodies may sometimes occupy a region surrounded by white matter deep in the brain and brainstem.

In this case a group of neuron cell bodies in the CNS is called a nucleus. For example, in the brain, surrounded by white matter, are several distinct groups of cell bodies, called the basal nuclei.

Now, a bundle of axons within the CNS is called a tract, like the cortico spinal tract, which consists of the axons of motor neurons extending from the cerebral cortex to the spinal cord.