What Are They, Structure, and More

What are the afferent and efferent neurons?

Afferent and efferent neurons refers to different types of neurons that make up the sensory and motor divisions of the peripheral nervous system, respectively. Neurons are electrically excitable cells that serve as the structural and functional unit of the nervous system. A typical neuron is composed of a cell body, which contains all of the cell’s organelles, and nerve fibers, which extend out from the cell body and include the dendrites and axon. The dendrites are short, branching extensions that receive incoming signals from other neurons, while the axon sends signals away from the cell body towards the synapse where the neuron communicates with one or multiple other neurons. Multiple axons working together in parallel is referred to as a nerve.

Neurons can be classified as afferent or efferent depending on the direction in which information travels across the nervous system. Afferent neurons carry information from sensory receptors of the skin and other organs to the central nervous system (i.e., brain and spinal cord), whereas efferent neurons carry motor information away from the central nervous system to the muscles and glands of the body. Both afferent and efferent nerve fibers work together in order to sense and respond to various stimuli, but they are not connected directly. Instead, a third type of neuron—called the interneuron or association neuron—acts as a relay between the two so that they can communicate with each other. 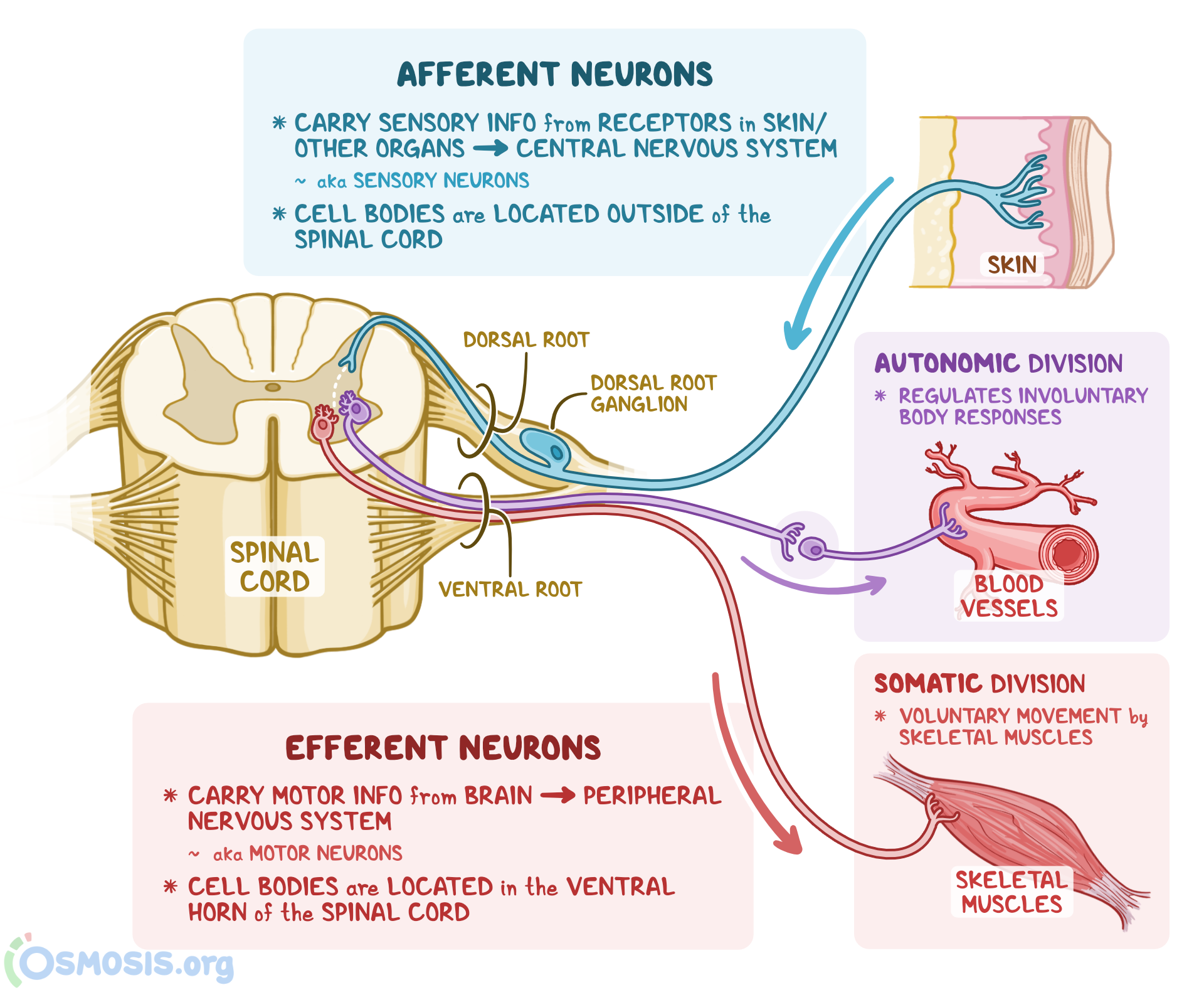 What are afferent neurons responsible for?

Afferent neurons, also called sensory neurons, are the nerve fibers responsible for bringing sensory information from the outside world into the brain. Sensory information may involve special senses, such as vision, hearing, smell, or taste, as well as the sense of touch, pain, and temperature. Afferent neurons are typically associated with specialized sensory receptors that are classified according to the stimuli they respond to.

When a stimulus from the outside world is sensed by the sensory receptors (e.g., touching a hot pan) the sensory afferent neurons send information about that stimulus up the spinal cord to the brain where association neurons will decide how to respond. Then, those association neurons will communicate with the motor efferent neurons, thereby sending information down the spinal cord and out towards the muscles, indicating what motion to perform (e.g., pulling away from the hot pan).

What are efferent neurons responsible for?

Efferent neurons, also called motor neurons, are the nerve fibers responsible for carrying signals from the brain to the peripheral nervous system in order to initiate an action. In other words, they are the neurons that tell your body to perform an action, such as removing your hand from a hot pan. The peripheral nervous system is further divided into the somatic efferent division, which consists of neurons that control voluntary movement by skeletal muscles, and the autonomic efferent division, which regulates involuntary body responses, such as heart rate, blood pressure, respiration, digestion, and sexual arousal.

What are the structural differences between afferent and efferent neurons?

Afferent neurons have a unique structure that differs from most other neurons. Their cell bodies are located just outside of the spinal cord in the dorsal root ganglion. Unlike most other neurons, the cell body has a single axon that divides into two distinct branches: one connected to the sensory organ and another that carries sensory information to the spinal cord via the dorsal root.

What are the most important facts to know about afferent and efferent neurons?

Quiz yourself on Afferent vs Efferent Neurons 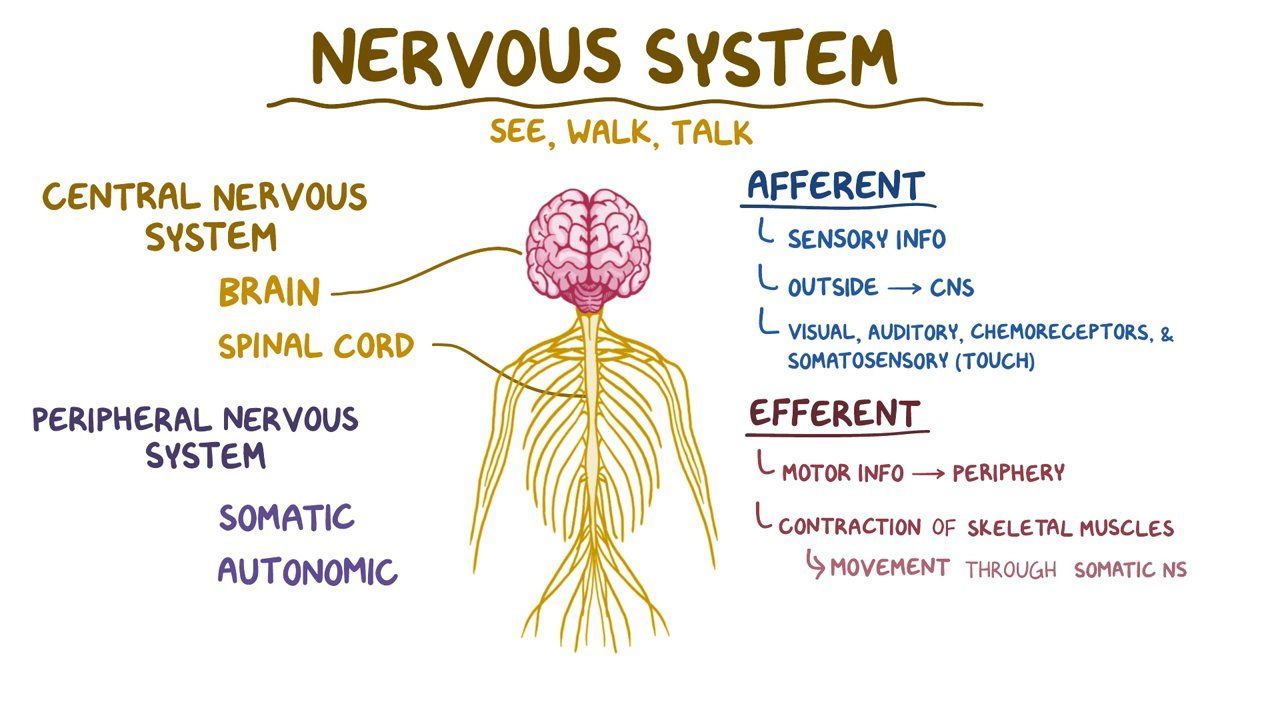 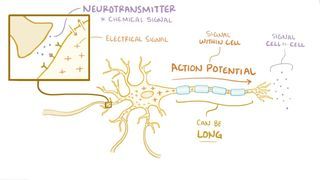 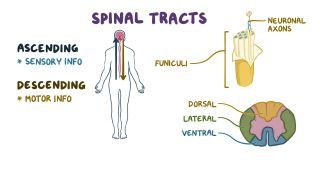 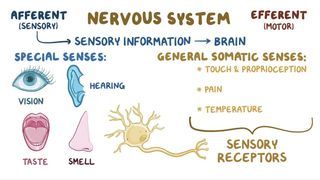 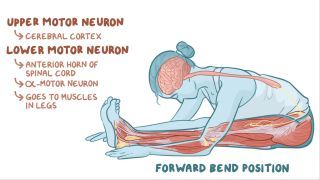 Organization of the Peripheral Nervous System.In University of Washington. Retrieved from http://courses.washington.edu/pbio375/PNS-org/pns-organization.html.