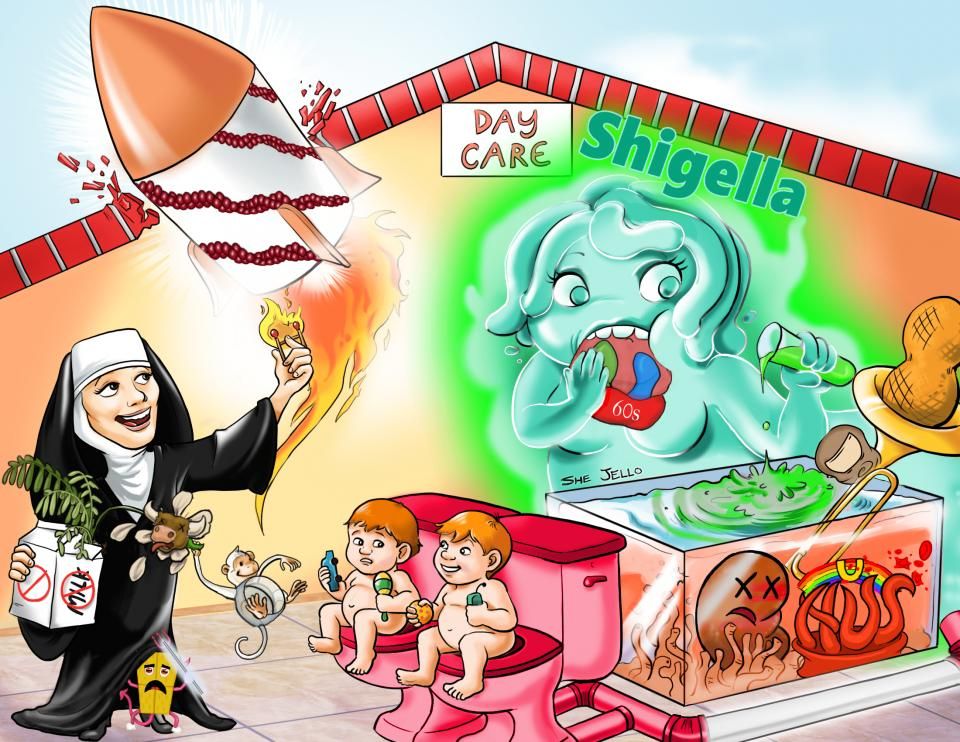 Shigella is a Gram-negative bacterium that belongs to the Enterobacteriaceae family.

There are 4 species of Shigella:

S. dysenteriae, S. flexneri; S. boydii; and S. sonnei, and each has its own serotypes.

In humans these species can all cause Shigellosis, which is a contagious infection of the intestines, particularly the colon.

And shigellosis can progress to dysentery, which is when the infection causes inflammation of the colon, resulting in severe abdominal pain and diarrhea.

Now, Shigella is a gram-negative, rod shaped bacterium, meaning it looks like a little red or pink stick on a gram stain.

And it’s a facultative anaerobe, so it can survive with or without oxygen in the environment.

It has no flagellum, making it nonmotile; and it doesn’t form spores.

It’s also a non-lactose fermenter, so it doesn’t ferment lactose; and it’s urease and oxidase-negative, meaning it doesn’t produce these enzymes.

Finally, it doesn’t produce hydrogen sulfide gas either, and this can be used to selectively identify Shigella on special culture mediums like MacConkey agar.

Now, once Shigella is ingested, it multiplies in the small intestine, and then passes into the colon.

There, it targets the epithelial layer of the mucosal lining where it infects colonic enterocytes and microfold cells, or M-cells.

And these M-cells phagocytose, which means they eat the bacteria from the intestinal lumen, and then spit it out into the underlying mucosa-associated lymphoid tissues, or MALTs.

MALTs are a type of mucosal immune tissue that extends into the submucosa, and contains plenty of immune cells like macrophages.

The macrophages gobble up Shigella to neutralize the pathogen, but the bacterium induces apoptosis, or programmed cell death, in the macrophage.

Now, when a macrophage dies, it releases a variety of cytokines, including IL-1β, which activates an intense inflammatory process that recruits additional immune cells to wage war at the site of infection.

And this results in the death of epithelial cells, which damages the colonic mucosa, resulting in ulcerations and abscesses.

All the damage and migration of immune cells, particularly polymorphonuclear leukocytes, through the epithelium disrupts the cellular junctions between neighboring epithelial cells, allowing Shigella from the intestinal lumen to enter enterocytes through the lateral sides of the cell.

And actually, that’s not the only way Shigella can infect enterocytes after the initial infection:

After Shigella kills the macrophage and is released into the immune tissue under the epithelium, it can access and infect colonic enterocytes from their basal side.

Shigella uses its type III secretory system, which acts almost like a syringe, to puncture and inject proteins into enterocytes that makes the enterocytes phagocytose Shigella.

So that means Shigella is slowly engulfed by the cell membrane, forming a membrane bound compartment that eventually pinches off from the cell membrane and ends up inside the cell, where it’s called a phagosome.

Then, Shigella can use a number of effector proteins, which lyse the phagosome and release Shigella into the cytoplasm.

This starts by recruiting the host cell’s small actin filaments to one end of the bacteria.

And as more and more actin filaments get recruited and polymerize behind the bacteria’s end pole, that propels the bacteria forward, like a rocket.

That helps Shigella “blast” through the lateral sides of both the host enterocyte and, after, the neighboring enterocyte, further spreading the infection.

Shiga toxin, similar to the shiga-like toxin producing pathotype of E. coli, is an AB toxin, so it has two main subunits, A and B, that are joined by a disulfide bond.

Each subunit plays a specific role in the invasion and destruction of a host cell.

The B subunit helps bind the toxin to the host’s cell membrane, where the toxin is ultimately engulfed into a phagosome.

Within the host’s cell cytoplasm, the inside of the phagosome becomes more acidic, and as a consequence, the disulfide bond holding the two subunits together becomes weak and eventually break, separating the subunits.

At this point, the A subunit can then diffuses through the phagosome membrane into the cytoplasm, where it targets the ribosomes.

In eukaryotic cells, ribosomes are made of two main subunits; the larger of the two is the 60S subunit, and it contains a 28S rRNA protein that’s important for the initiation of polypeptide synthesis.