A 1-day old boy is evaluated in the neonatal ICU for preterm birth and low birth weight. The patient was born via uncomplicated spontaneous vaginal delivery to a 35-year-old woman at 34 weeks gestation. The neonate has passed urine and is breastfeeding. He has not passed stool. The mother had a normal pregnancy with regular antenatal care. During her pregnancy, she had two upper respiratory tract infections and a urinary tract infection that was treated. She did not use illicit drugs or consume alcohol during her pregnancy. She did consume caffeinated energy drinks and smoked a pack of cigarettes on the weekends throughout her pregnancy. Temperature is 37.2°C (99°F), blood pressure is 70/30 mmHg, pulse is 120/min, and respiratory rate is 55/min. His weight, length and head circumference are at the 40th percentile for gestational age. Birth weight was 1500g. Abdomen is soft and nontender. Normal heart sounds are heard on cardiovascular auscultation. Which of the following intrauterine processes is most likely responsible for this patient’s clinical findings? 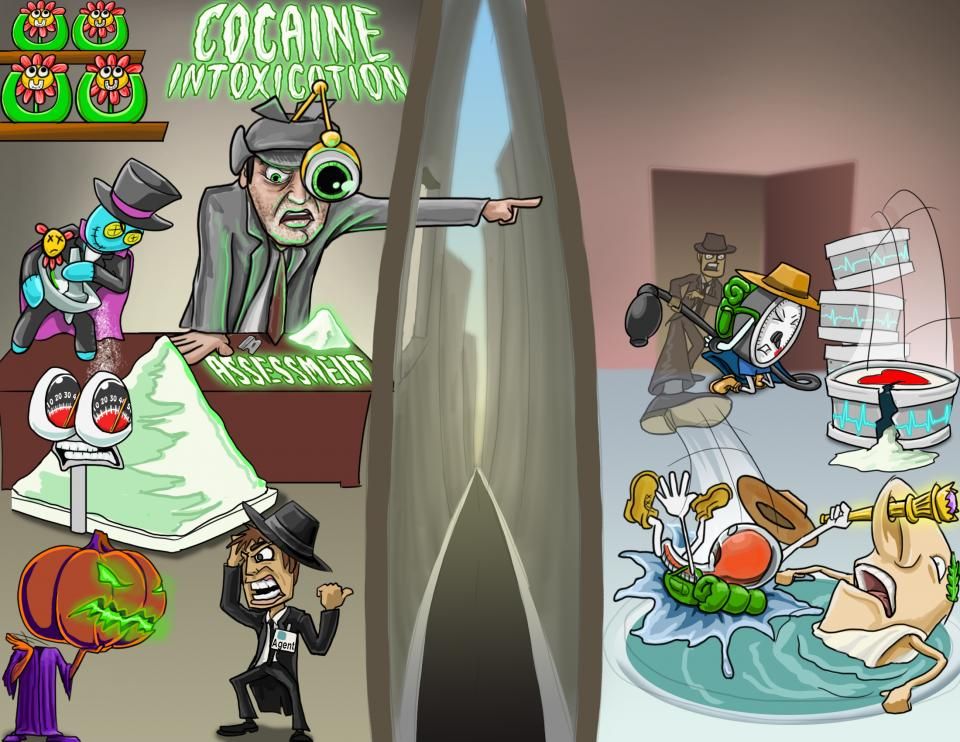 In the middle of the night, a 25 year old female, named Sylvie, comes to the emergency department complaining of retrosternal chest pain that began a couple of hours ago. Earlier that night, she was at a party, where she and her friends consumed alcohol.

Upon further questioning, Sylvie reveals that she also consumed an illicit drug. She is otherwise healthy, has no history of cardiac disease, and does not take any medications.

On physical examination, Sylvie is sweating profusely. In addition, her pupils are dilated, and the nasal septum is atrophic.

Vital signs reveal a temperature of 100 degrees Fahrenheit or 37.7 degrees Celsius, a heart rate of 110 beats per minute, and a blood pressure of 160 over 90 millimeters of mercury.

Some days later, you meet a 36 year old male, named Hunter, who comes in due to recurrent headaches associated with trouble concentrating and irritability.

Hunter adds that he feels like he can’t stop eating, and as a consequence, he’s gained about 3 kilograms, or about 7 pounds, over the last two weeks.

When you ask about his habits, Hunter admits to smoking 2 packs of cigarettes daily for the last 10 years, but stopped smoking about two weeks ago.

Based on the initial presentation, both Sylvie and Hunter seem to have a form of stimulant intoxication or withdrawal.

Stimulants are a group of substances that, when consumed, typically lead to increased activity in the body and brain.

Now, for your exams, remember that excessive intake of stimulants may result in stimulant intoxication, which can cause several non-specific symptoms, including being more awake, alert, and energetic, having an elevated mood, and a decreased appetite.

However, they also come with some undesirable symptoms like anxiety, psychomotor agitation or restlessness, aggressive behavior, and insomnia.

In addition, stimulants may have physical effects like diaphoresis or excessive sweating, tachycardia or increased heart rate, cardiac arrhythmias, hypertension or elevated blood pressure, and mydriasis or pupillary dilation.

Over time, individuals who regularly use stimulants may develop tolerance, which is the need for increasing doses to achieve the same effect, as well as dependence, which is when the body adapts to that substance and needs it to function normally.

As a result, individuals that stop using it may experience nonspecific withdrawal symptoms, sometimes known as post-use "crash" or wash-out syndrome, which can include depression, increased appetite, psychomotor retardation or slowing down of a person’s thought, emotional reactions, and movements, as well as sleep disturbances like hypersomnia or excessive sleepiness, and miosis or pupillary constriction.

Now, bear in mind that, in addition to these nonspecific symptoms, intoxication or withdrawal from each stimulant can cause its own set of specific symptoms that you must be able to recognize for your exams.

Okay, let’s begin with one of the most frequently used stimulants, caffeine! Caffeine is present almost everywhere- in coffee of course, but also tea, caffeinated energy drinks, sodas, and even chocolate! Now, the way this stimulant works is by blocking the adenosine receptors.

Normally, adenosine has numerous effects in the nervous system, such as decreasing neuronal activity to trigger sleepiness.

Adenosine can also bind to receptors outside the nervous system, such as in the heart, where it causes heart rate to slow down, and in the kidneys, where it decreases urine output.

Now, when caffeine is consumed in moderate doses, it can have a wide variety of effects, including improved cognitive performance, concentration, alertness, energy, and mood.

What’s important to remember though is that excessive caffeine intake can lead to palpitations, tremor, restlessness, agitation, and can cause insomnia.

In addition, caffeine has a laxative effect that stimulates bowel movement, so excessive consumption can cause gastrointestinal disturbances like diarrhea. Finally, caffeine also acts as a diuretic, leading to increased frequency and urgency of urination.

Now, if an individual regularly consumes caffeine, say to study for their tests, over time they may develop tolerance and dependence.

As a result, if they suddenly quit caffeine, they may experience withdrawal symptoms, such as a depressed mood, irritability, low energy, and difficulty concentrating.

These are typically accompanied by certain physical symptoms, such as a persistent diffuse headache, as well as flu-like symptoms, like nausea and muscle pain.

What’s important to keep in mind is that the higher the consumption of caffeine, the more severe the withdrawal symptoms will typically be.

Okay, another very common stimulant is nicotine, which is found in tobacco products, like cigarettes, cigars, or pipes.

When a person smokes or chews tobacco, nicotine is absorbed, either through the lungs or the oral mucosa, into the bloodstream.

From there, nicotine can travel and bind to nicotinic receptors in postsynaptic neurons throughout the nervous system.

In the central nervous system, nicotine triggers the release of neurotransmitters like dopamine, which is involved in the brain’s reward pathway that triggers feelings of pleasure, as well as glutamate, which results in improved cognitive performance and concentration.

On the other hand, in the peripheral nervous system, nicotine triggers the release of neurotransmitters like adrenaline and noradrenaline.

This leads to a variety of effects, such as increased blood pressure, heart rate, and cardiac contractility, as well as a laxative effect.

As a result, excess nicotine consumption and intoxication often cause symptoms like restlessness, agitation, diaphoresis, as well as abdominal pain, nausea, and vomiting.

Now, it’s thought that nicotine is responsible for the addictive qualities of tobacco, but it’s important to keep in mind that tobacco contains thousands of toxic chemicals, which are responsible for its health consequences.

One of these chemicals is formaldehyde, which over time can damage a variety of organs and tissues, increasing the risk for cancers involving the head and neck, lung, stomach, colon, pancreas, kidneys, and bladder.

Formaldehyde can also cause damage to the inner lining of arteries, which increases the risk of myocardial infarction, stroke, and peripheral vascular disease.

Another byproduct of tobacco smoke is carbon monoxide, which makes its way into the bloodstream and binds competitively to hemoglobin, meaning it displaces oxygen to form carboxyhemoglobin.

And that leads to impaired oxygen unloading and delivery to tissues. In addition, exposure to tobacco smoke over time can affect the lung function, causing chronic obstructive pulmonary disease or COPD for short.

Smoking during pregnancy is also associated with various complications, like fetal growth restriction, placental abruption, which is a detachment of the placenta from the uterine wall, and can lead to preterm delivery, or miscarriage.

For your exams, remember that this is because nicotine can induce vasospasm of the placental vessels, resulting in abnormal gas exchange across the placenta.

On top of that, carbon monoxide leads to the formation of carboxyhemoglobin, which results in impaired fetal oxygen delivery. Okay, now, over time, nicotine use may result in tolerance and dependence.

As a consequence, individuals that stop consuming tobacco products may experience withdrawal symptoms, such as craving for nicotine, irritability, anxiety, restlessness, and poor concentration.

In addition, many individuals can experience headaches, sleep disturbances like insomnia, depressed mood, as well as constipation, and increased appetite, which can lead to weight gain.

Withdrawal symptoms can begin within 2 hours after the last use of nicotine, and typically peak within 1 or 2 days.

While withdrawal tends to decline over the next few days and weeks, many smokers continue to feel awful for months after their last cigarette. And this is what makes it so difficult to quit smoking!