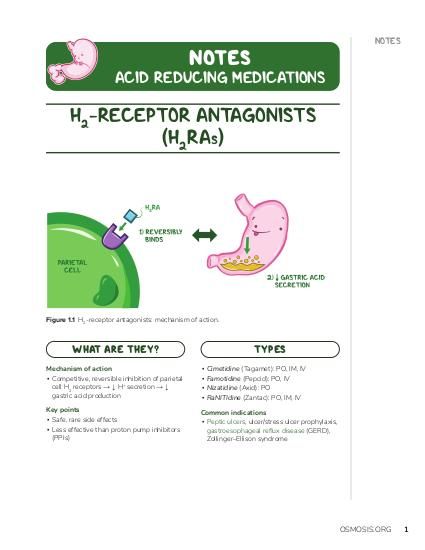 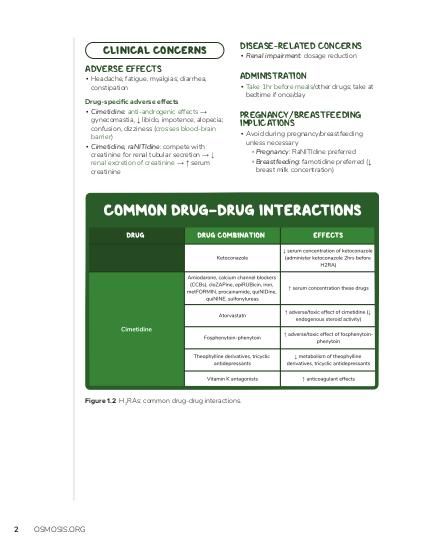 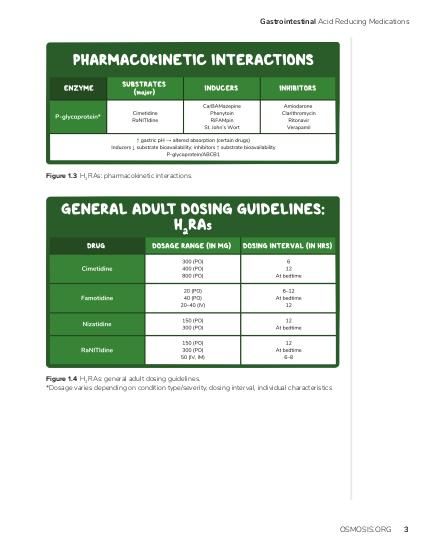 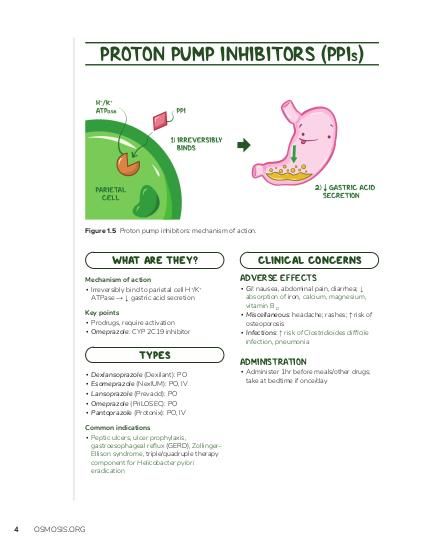 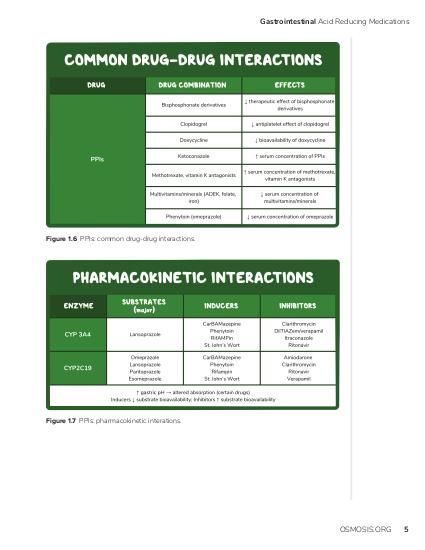 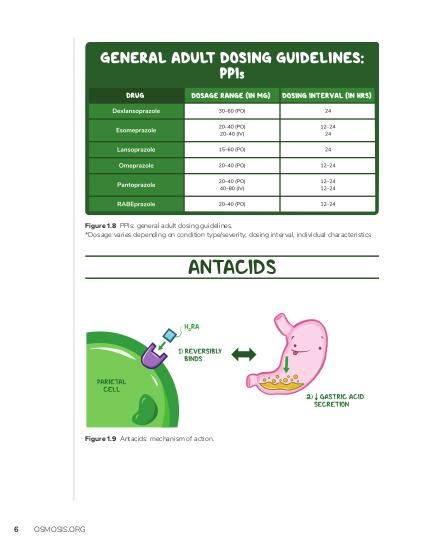 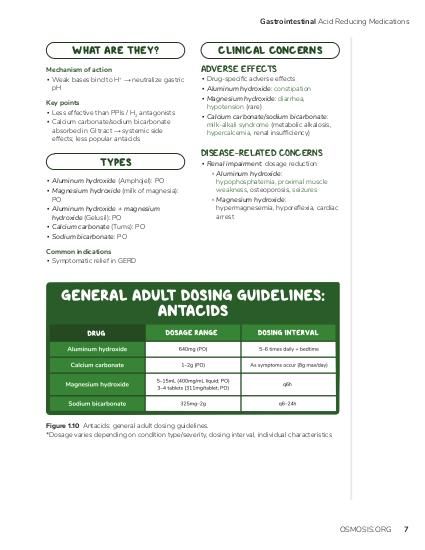 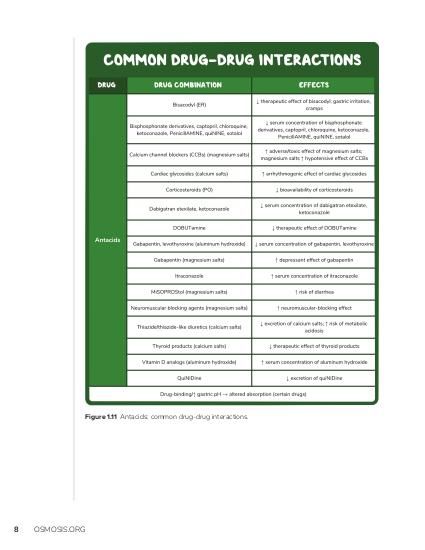 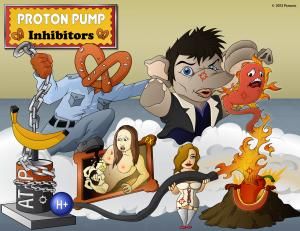 Acid reducing medications include antacids that directly lower the acidity of stomach contents, and antisecretory medications that act on parietal cells in the stomach to decrease acid secretion.

They are used to treat conditions like gastroesophageal reflux disorder and peptic ulcer disease by decreasing the acidity of the stomach and allowing the epithelial linings to heal.

Now, the stomach is composed of four regions: the cardia, the fundus, the body, and the pyloric antrum.

There’s also a pyloric sphincter, or valve, at the end of the stomach, which closes while eating, keeping food inside for the stomach to digest.

The epithelial layer of the stomach contains a variety of gastric glands which secrete a variety of substances.

Starting with the cardia, it contains mostly foveolar cells that secrete a protective mucus, which is mostly made up of water and glycoproteins.

The fundus and the body contain both the parietal cells and enterochromaffin-like cells, and the antrum and pyloric areas contain G-cells.

Now gastric acid is mainly composed of HCl, or hydrochloric acid, which is mainly secreted by the parietal cells.

When food enters the stomach, it causes the stomach walls to expand, which leads to the activation of these receptors.

First, stomach expansion causes the branches of the vagus nerve that innervates the stomach to release acetylcholine, which activates M3 receptors.

Next, the G cells in the antrum of the stomach release gastrin, which activate the CCK2 receptors.

Activation of M3, CCK2, and H2 receptors increases the conversion of H20 and CO2 to H+ and HCO3- by carbonic anhydrase. The H+ is then pumped out of the cell and into the stomach via the H+/K+-ATPase pump.

These H+ ions combine with Cl- ions to form hydrochloric acid and decrease the pH in the stomach.

Normally, the stomach is protected from the acidic environment by the mucus secreted by foveolar cells.

However, if there’s an imbalance between mucus and acid secretion, like in Zollinger-Ellison syndrome, which is caused by a gastrin secreting tumor, it could lead to damage of the stomach. This could manifest as chronic gastritis and gastric, or peptic ulcers.

Now, in the esophagus, the lower esophageal sphincter prevents most of the gastric acid from coming back up when the stomach is full or when you’re laying down.

If this sphincter is loose, the acid could reflux into the lower esophagus and erode the esophageal lining. This is called GERD, or gastroesophageal reflux disease, more commonly known as heartburn.

One way to mitigate the harmful effects of gastric acid in these disorders is to decrease its acidity through medications.

Let’s start with the H2 receptor antagonists like cimetidine, raNITIdine, famotidine, and nizatidine. H2 antagonists end up with the suffix -tidine, so remember, they enable you t(w)o dine!

These medications are competitive, reversible antagonists of H2 receptors, meaning they bind to these receptors so histamine can’t.

These medications are able to decrease night time and food stimulated acid secretion by over 90%.

They generally take effect within an hour of ingestion and last for around 12 hours, so they can be taken one hour before meals or before bedtime, if taken once per day. They are generally given orally, but intramuscular and IV formulations are available.

But, since they are less effective than proton pump inhibitors (PPIs), they are often classified as second-line treatment. Generally, H2 antagonists are safe medications, so side effects are rare.

But, if they occur, they typically include headache, fatigue, myalgias, diarrhea, and constipation. Now, cimetidine is a strong inhibitor of cytochrome P450 enzymes in the liver.

These enzymes are responsible for the metabolism of a variety of medications and toxins in our body.

So, if taken with other medications like benzodiazepines or warfarin, cimetidine could reduce their rate of elimination and cause them to build up in the body.

Cimetidine also has anti-androgenic effects and could cause gynecomastia, sexual dysfunctions like decreased libido, and loss of hair, or alopecia.

These side effects are reversible and they typically resolve over time once the medication is discontinued.

Since it crosses the blood brain barrier, it could also cause confusion and dizziness. In kidneys, cimetidine and raNITIdine compete with creatinine for renal tubular secretion.

Finally, H2 antagonists can cross the placenta. But, even though there are no known harmful effects for a fetus, they should be avoided during pregnancy and breastfeeding.

If necessary, the preferred medication during pregnancy is raNITIdine; and during breastfeeding is famotidine.

The oral forms of these medications are absorbed in the small intestine in their inactive form and get metabolized in the liver.

Next they travel through the blood to the parietal cells where the acidic environment helps protonate them so they become fully active.

These activated PPIs irreversibly bind to and inhibit the H+/K+-ATPase, or proton pumps, found within parietal cells.

Because of this, they are more useful for the treatment of peptic ulcers, gastroesophageal reflux disease (GERD), and Zollinger-Ellison syndrome.

On the flip side, they are equally effective in the prevention of ulcers. Furthermore, they have a weak antibacterial effect against the peptic ulcer causing H. Pylori, so they are used in combination with antibiotics like amoxicillin, clarithromycin, or metronidazole.