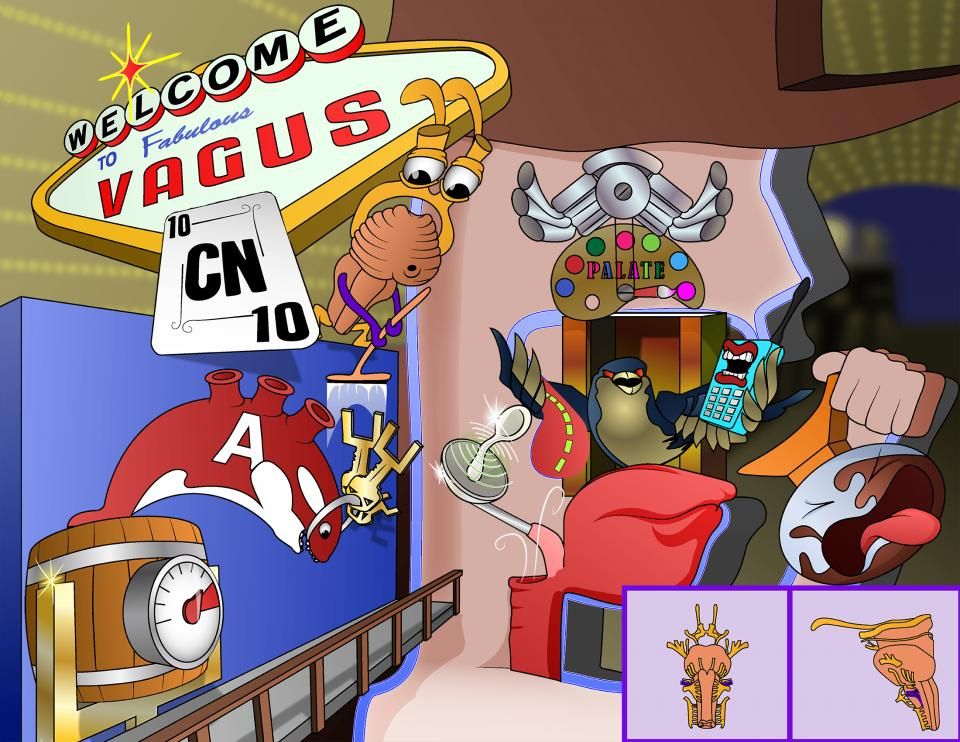 The vagus nerve is the tenth cranial nerve, and its name comes from the latin word vagary, which means indefinite or wandering.

This actually reflects its wide distribution seeing as the vagus nerve is the most extensively distributed cranial nerve; in fact, it innervates structures all the way from the head and neck to parts of the digestive tract!

The vagus nerve has multiple functions such as somatic, visceral and special sensory innervation, as well as somatic and visceral motor innervation.

Now, the vagus nerve emerges from the lateral medulla through a group of rootlets that join and leave the cranium through the jugular foramen along with cranial nerves 9 and 11, or the glossopharyngeal and spinal accessory nerves.

Both left and right vagus nerves leave the cranium through the jugular foramen on their respective sides, and penetrate the carotid sheath.

Then, they descend within the carotid sheath, posterior to the common carotid artery and medial to the internal jugular vein. From here, each vagus nerve takes a different course as they enter the thorax.

When it reaches the lower part of the esophagus, it forms the posterior vagal trunk and then enters the abdomen through the esophageal hiatus of the diaphragm.

The left vagus nerve, on the other hand, enters the thorax between the left common carotid artery and the left subclavian artery and descends on the aortic arch.

Then, it runs posterior to the left main bronchus, contributing to the cardiac pulmonary and esophageal plexuses, and finally it continues to form the anterior vagal trunk, and enters the abdomen through the esophageal hiatus.

In the abdomen, the vagal trunks terminate by dividing into branches that contribute to various plexuses which supply the visceral organs of the abdomen up to approximately the last third of the transverse colon.

Over its course, both the right and left vagus nerves give off a number of branches such as the pharyngeal branches, the recurrent laryngeal nerves and the superior laryngeal nerves, which then further divide into the internal and external laryngeal nerves.

All of these branches provide branchial motor innervation to the muscles of the fourth and sixth pharyngeal arches.

Remember that the pharyngeal arches are 6 embryological structures, of which only 5 eventually develop into various muscles, arteries, bones and cartilage of the head and neck.

The structures of the 4th arch are all innervated by the superior laryngeal nerves and pharyngeal branches of vagus.

Structures derived from the sixth pharyngeal arch include all the intrinsic muscles of the larynx, except the cricothyroid muscle; as well as the cricoid and arytenoid cartilages of the larynx. The structures of the 6th arch are innervated by the recurrent laryngeal nerves.

Now, the course of the right and left recurrent laryngeal nerves back towards the larynx is slightly different.

Once in the neck, both nerves pass posterior to the thyroid gland and enter the larynx. So, together, the superior laryngeal, pharyngeal and the recurrent laryngeal branches of the vagus nerve provide branchial motor innervation to the majority of the muscles of the palate, pharynx and the larynx which are mainly involved in swallowing and phonation.

Sensory information from all the structures below the vocal folds travels via the recurrent laryngeal nerves.

Now let’s look at how the vagus nerve, along with the glossopharyngeal nerve, participate in the gag reflex.