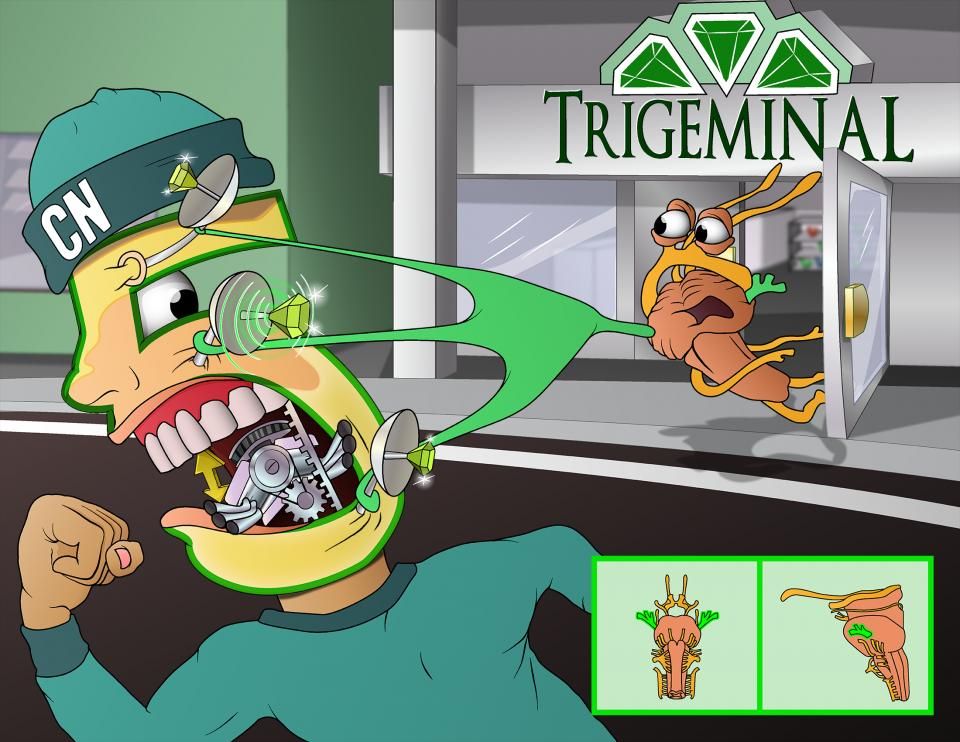 The ophthalmic and the maxillary nerves only have sensory functions, while the mandibular nerve has both sensory and motor functions.

So, the trigeminal nerve is in charge of sensation for the face, mouth, nasal cavity and dura mater of the cranial cavity, and also of motor functions like biting and chewing.

Now, the trigeminal nerve emerges from the lateral aspect of the pons by a large sensory root and a small motor root.

The large sensory root mainly consists of cell bodies of the pseudounipolar neurons that make up the sensory trigeminal ganglion, which sits within a dural recess lateral to the cavernous sinus, called the trigeminal cave.

When the ophthalmic, maxillary, and sensory component of the mandibular nerves detect a signal from their sensory nerve endings, the pseudounipolar neurons that make up these nerves transmit their signal through the trigeminal ganglion as first order neurons in the pathway, to synapse in the different trigeminal nuclei located along the brainstem.

These third order neurons then travel through the internal capsule and go on to synapse in the cerebral cortex of the postcentral gyrus where the sensory information is received and interpreted by our brain.

Now, regarding the motor component of the trigeminal nerve: first order neurons from areas such as the cerebral cortex of the precentral gyrus travel through the internal capsule and typically cross the median plane at the level of the pons to synapse in the trigeminal motor nuclei with second order neurons located in the pons of the brainstem.

These second order neurons then exit and pass inferior to the trigeminal ganglion to form the motor component of the mandibular nerve.

The motor fibers blend with the sensory fibers of the mandibular nerve as the nerve traverses the foramen ovale in the cranium.

Eventually, these motor branches innervate the muscles that help with mastication.

Each sensory nucleus receives a different type of information.

So, the mesencephalic nucleus is located in the lower midbrain and receives proprioception for masticatory muscles, and it also senses deep pressure which prevents you from biting down hard enough to lose a tooth!

The principal sensory nucleus which is located in the pons, receives tactile information from the face and mouth.

Finally, the spinal trigeminal nucleus extends down the medulla and into the spinal cord, and receives pain and temperature information from the face.

Let’s take a quick break and try to identify the trigeminal nerve and its three major branches.

Now, let’s take a look at the first branch of the trigeminal nerve which is the ophthalmic nerve, or cranial nerve V1.

It originates from the trigeminal ganglion in the middle cranial fossa and passes anteriorly through the lateral wall of the cavernous sinus.

Overall, the ophthalmic nerve transmits sensory fibers from the eyeball, the skin of the upper face and anterior scalp, the lining of the upper part of the nasal cavity and air cells, and the meninges of the anterior cranial fossa.

And now for the specifics.

The frontal nerve passes along the roof of the orbit and divides in two branches: the supraorbital nerve and the supratrochlear nerve.

The nasociliary nerve passes through the superior orbital fissure within the common tendinous ring and gives off four branches: the long ciliary nerve, the short ciliary nerve and the anterior and posterior ethmoidal nerves.

The preganglionic parasympathetic fibers travel with the oculomotor nerve and synapse in the ciliary ganglion.

The ethmoidal nerves give sensory fibers to the meninges of the anterior cranial fossa, and then supply the upper part of the nasal cavity and to the external tip of the nose, as well as the sphenoid and the ethmoidal air cells.

The lacrimal nerve supplies the lacrimal gland and a small area of the adjacent skin and conjunctiva.

The lacrimal nerve also carries postganglionic parasympathetic fibers from the pterygopalatine ganglion to innervate the lacrimal gland, which synapse with the preganglionic fibers originating from the superior salivatory nucleus and travel with the facial nerve.

Now, the nasociliary branch of the trigeminal nerve, along with the temporal and zygomatic branches of the facial nerve, collaborate for two reflexes: the corneal reflex and the lacrimal reflex.

The corneal reflex, also known as the blink reflex, refers to involuntary blinking that happens when the cornea is stimulated by a foreign body or a bright light - like when a grain of sand gets in your eye, or when someone is pointing a flashlight at your eyes.

The stimulus is sensed by the nasociliary nerve, travels to the ophthalmic nerve and then to the principal sensory nucleus of the trigeminal nerve located in the brainstem.

This nucleus sends signals to the facial motor nucleus to begin the efferent portion of the reflex, and synapses with the facial nerve on each side.

Then, the facial nerve activates the orbicularis oculi muscle which contracts and causes the eyelid to close.

So this reflex protects the eyes from foreign bodies and bright lights.

The lacrimal reflex has the same afferent pathway as the blink reflex, and the efferent pathway starts with the preganglionic parasympathetic fibers that travel through the facial nerve to synapse in the pterygopalatine ganglion.

The fibers then travel through various branches to reach the lacrimal nerve which innervates the lacrimal gland, initiating tear production.

Let’s take another break and see if you can recognize the ophthalmic nerve and all its branches.

Moving on to the second branch of the trigeminal nerve which is the maxillary nerve, or cranial nerve V2, which transmits sensory fibers from the skin of the face between the palpebral fissure and the mouth, from the nasal cavity and the sinuses, and from the maxillary teeth.

From the trigeminal ganglion, cranial nerve V2 passes in the lower part of the lateral wall of the cavernous sinus, goes through the foramen rotundum to the pterygopalatine fossa and divides in two major branches: the infraorbital nerve and the zygomatic nerve, but it also gives smaller branches like the nasal, greater and lesser palatine, and pharyngeal nerves, which supply the nose and the palate.

The infraorbital nerve branches from the trigeminal nerve to enter the pterygopalatine fossa.

Then, it passes through the inferior orbital fissure, and runs anteriorly within the infraorbital groove of the orbital floor where it gives off three superior alveolar nerves, which are sensory branches for the maxillary sinus and teeth.

Then it enters the infraorbital canal within the floor of the orbit, and exits through the infraorbital foramen giving off branches that supply the skin of the medial cheek, the lateral nose and the upper lip.

The zygomatic nerve, on the other hand, arises in the pterygopalatine fossa and enters the orbit through the inferior orbital fissure.

Then, it runs in the lateral wall of the orbit where it divides in two small cutaneous branches: the zygomaticotemporal nerve and the zygomaticofacial nerve, which supply the skin over the zygomatic and temporal bones, or more simply the cheek and temple.

The zygomatic nerve carries postganglionic parasympathetic nervous system (PNS) information to the lacrimal nerve as part of the lacrimal reflex, while its preganglionic fibers travel with the nervus intermedius and then the greater petrosal nerve before they synapse in the pterygopalatine ganglion.

They also carry postganglionic parasympathetic fibers from the pterygopalatine ganglion to the nasal glands.