A lab study is simulating secondary hemostasis. In the study, both the intrinsic and extrinsic pathways of coagulation lead to the formation of the active form of factor X (Xa). Which of the following is the correct order of events to occur afterward? 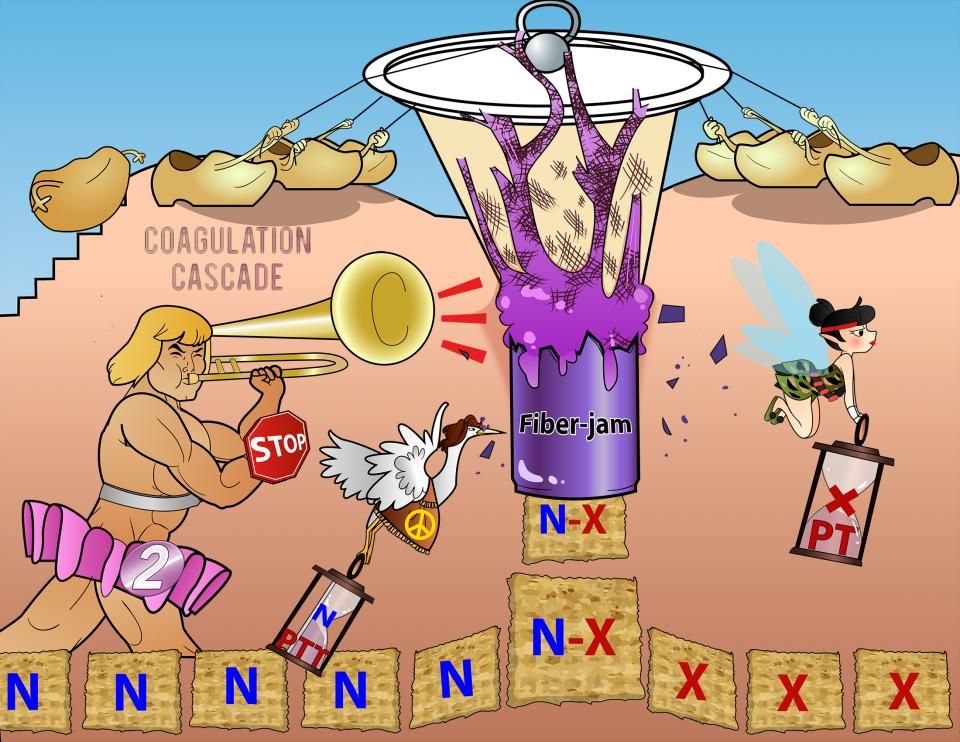 Hemostasis can be broken down into hemo referring to blood or bleeding and stasis meaning to stop - so together it means stopping bleeding. Hemostasis has two phases: primary and secondary hemostasis.

In primary hemostasis, platelets aggregate to form a plug at the site of an injured blood vessel. While these platelets are aggregating, coagulation, or secondary hemostasis starts.

These factors activate one another, eventually leading to the activation of fibrin or factor Ia. That results in a fibrin mesh which forms around the platelet plug to reinforce it and hold it together.

Without primary and secondary hemostasis, our body would suffer massive blood loss from even the most minor injuries--imagine losing all of your blood volume from something as simple as a pinprick!

So let’s get into the details of secondary hemostasis. The process of forming the fibrin mesh begins via two pathways --the extrinsic and intrinsic pathways.

The intrinsic pathway is called intrinsic because all of the factors required to activate it are intrinsic, or found within the blood.

Conversely, the extrinsic pathway is called extrinsic because it’s activated by tissue factor found extrinsically, or outside of the blood.

Both pathways can become activated independently and ultimately culminate in the activation of factor X, which then proceeds to activate the rest of the coagulation cascade via the common pathway.

Let's start with the extrinsic pathway. It starts when trauma damages the blood vessel, and exposes the cells under the endothelial layer, like smooth muscle cells, which have tissue factor or factor III in their membrane.

Now, it turns out that there’s an enzyme called factor VII floating around in the blood, and some of it is active, meaning that it’s already set to proteolytically cleave other proteins.

When it’s in that state, it’s called active factor VII or VIIa. “a '' for active. Factor VIIa binds to a tissue factor and a calcium ion -which get released by nearby activated platelets--and it forms a VIIa-TF complex on the surface of the smooth muscle cell.

Both the calcium ions and tissue factors are co-factors, meaning that they need to bind to the enzyme factor VIIa to allow it to really get going. This complex then cleaves clotting factor X yielding the active form called factor Xa.

In fact, each prothrombinase complex can activate thousands of thrombin, so there’s enormous amplification that occurs at this step. Thrombin uses calcium ion as a cofactor and it has a number of pro-coagulative effects.

First, thrombin binds to receptors on platelets causing them to activate. Activated platelets change their shape to form tentacle-like arms that allow them to stick to other platelets.

Second, thrombin activates three cofactors; factor V, which is used in the common pathway; factor VIII; and fabin, which proteolytically cleaves fibrinogen or factor I, into factor Ia or fibrin.

Third, the effect of thrombin on fibrinogen plays a big role. Fibrinogen is soluble in blood, but fibrin isn’t, so fibrin precipitates out of the plasma and forms long protein chains that are like ropes. The fibrin tether platelets to one another, holding the platelet plug together.

Coagulation is the process of formation of a blood clot. It is secondary hemostasis that occurs after vascular damage has occurred and platelets have been activated. Its purpose is to form the fibrin mesh necessary to stabilize the platelet plug to stop bleeding. Coagulation happens in a series of steps called the coagulation cascade, which is a series of enzymatic reactions that leads to the conversion of fibrinogen to fibrin. The final product is a stable plug that stops the bleeding. Factors XII, XI, IX, VIII, VII, V, and IV are essential for the initiation of coagulation. Proteins C and S inhibit the coagulation cascade by inactivating factors Va and VIIIa, respectively.