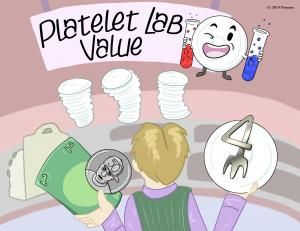 Hemostasis is how the body prevents blood loss a blood vessel is injured and broken.

Without hemostasis even a minor injury would be life-threatening - imagine dying from a nosebleed! During primary hemostasis, platelets clump up together and form a plug around the site of injury.

Then in the second stage, called secondary hemostasis, the platelet plug is reinforced by a protein mesh made up of fibrin.

You can think of it like a brick wall where the platelets make up the bricks and the fibrin makes up the mortar that goes between the bricks.

So going back to primary hemostasis, the clumping up of platelets - this step can be further divided into five steps: endothelial injury, exposure, adhesion, activation, and aggregation.

Let's imagine that you accidently slice a tiny artery in your finger while cutting fruit, ouch! When this happens, the knife cuts several layers of the artery.

The innermost layer of the artery is the endothelium, and it’s made up of endothelial cells.

Just outside of this layer are several layers of smooth muscle cells, which control the size of the lumen, or the inner diameter of the vessel by contraction and relaxation.

Outside of the smooth muscle there’s a layer of protein - specifically elastic fibers which give the blood vessel the ability to expand and contract.

Outside of the elastic fibers, there’s connective tissue made up of collagen, which is the major structural protein in humans.

This fibrous layer protects the vessel and anchors it to the surrounding tissues.

So, the first thing that happens when the knife cuts your finger is endothelial injury.

This makes the vessel more narrow to reduce blood flow and ultimately decrease blood loss through the damaged artery.

Now, endothelial cells normally secrete nitric oxide and prostaglandins into the blood which cause nearby smooth muscles to relax.

When there’s endothelial injury, secretion of nitric oxide and prostaglandins decreases, and the endothelial cells secrete a protein called endothelin instead, which causes the smooth muscles to contract.

The second step is exposure - that’s because damage to the endothelial cells exposes the collagen that is below them.

The third step is adhesion.

Platelets, which are small fragments of larger cells called megakaryocytes, continuously circulate in the blood.

When endothelial cells are damaged, platelets come in contact with the Von-Willebrand factor bound to collagen.