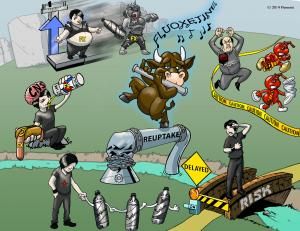 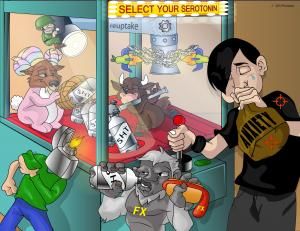 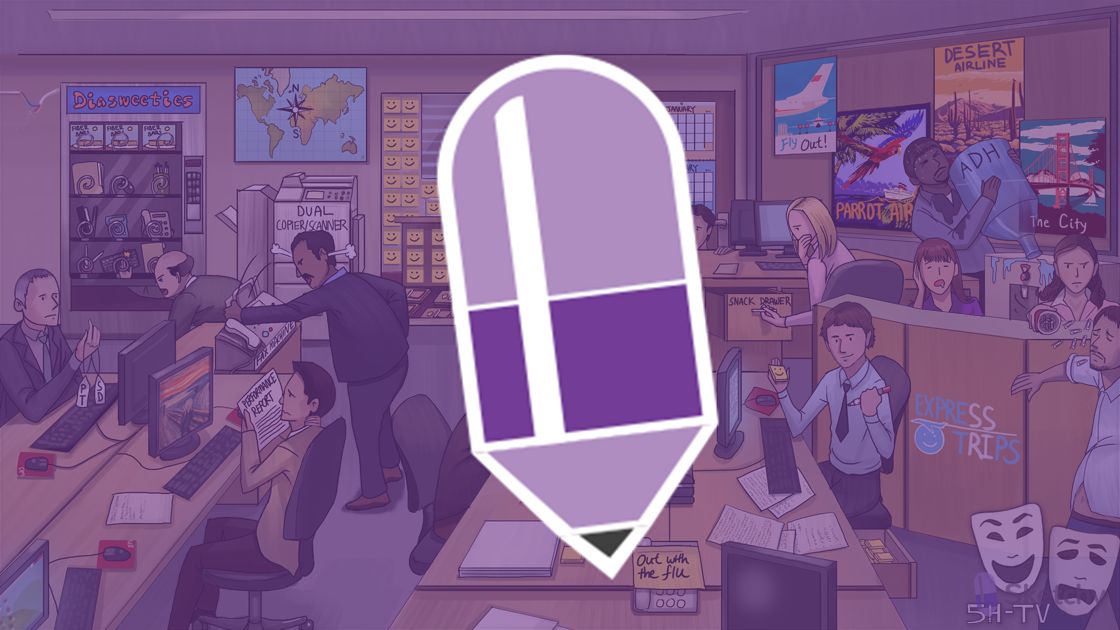 Selective serotonin reuptake inhibitors work by increasing the levels of serotonin to alleviate the symptoms of depression.

Now, serotonin is a neurotransmitter that helps regulate mood, emotions and feeding behavior.

Presynaptic serotonergic neurons use the amino acid tryptophan to synthesize serotonin, which is also called 5-hydroxytryptophan, or 5-HT.

Once synthesized, serotonin is stored in small vesicles within the presynaptic neuron.

The serotonin drift around until they bind to 5HT2 receptors on the postsynaptic neuron, and cause it to fire off its own action potential.

As long as there’s a high enough concentration of serotonin in the synaptic cleft, the postsynaptic neuron will continue to fire.

On the presynaptic neuron, there are serotonin reuptake transporters or SERTs.

This protein functions like a little trap door on the cell membrane; when a sodium, a chloride and a serotonin binds to the surface of this protein on the extracellular side, it flips over and sends the serotonin and the ions into the cell.

When a potassium ion binds to the protein on the intracellular side, the trapdoor resets again, so more serotonin can attach.

This way, serotonin is taken back into the presynaptic neuron, its concentration in the synaptic cleft decreases, and the postsynaptic neuron stops firing.

Now, in conditions such as major depressive disorder, where there’s a low serotonin level, selective serotonin reuptake inhibitors are the first-line therapy due to their milder side effects.

Common medications in this class include escitalopram, fluoxetine, fluvoxamine, sertraline, paroxetine, and citalopram.

They bind to serotonin reuptake transporters and inhibits them, which increases the serotonin level within the synaptic cleft.

It's important to note that these medications are slow-acting because it takes time for serotonin to accumulate within the synaptic cleft.

Because of this, it usually takes 4-6 weeks before improvements can be seen.

Other conditions that can be treated with SSRIs include chronic anxiety, post traumatic stress disorder, or PTSD, obsessive-compulsive disorder, or OCD, and eating disorders like bulimia.

Common side effects of SSRI include anxiety, insomnia, GI distress, sexual dysfunctions, and syndrome of inappropriate antidiuretic hormones or SIADH.

The most dangerous, however, are suicidal ideations, especially in individuals under 25, and serotonin syndrome.

Serotonin syndrome is a life threatening condition caused serotonin accumulation which causes over stimulation of the nervous system.