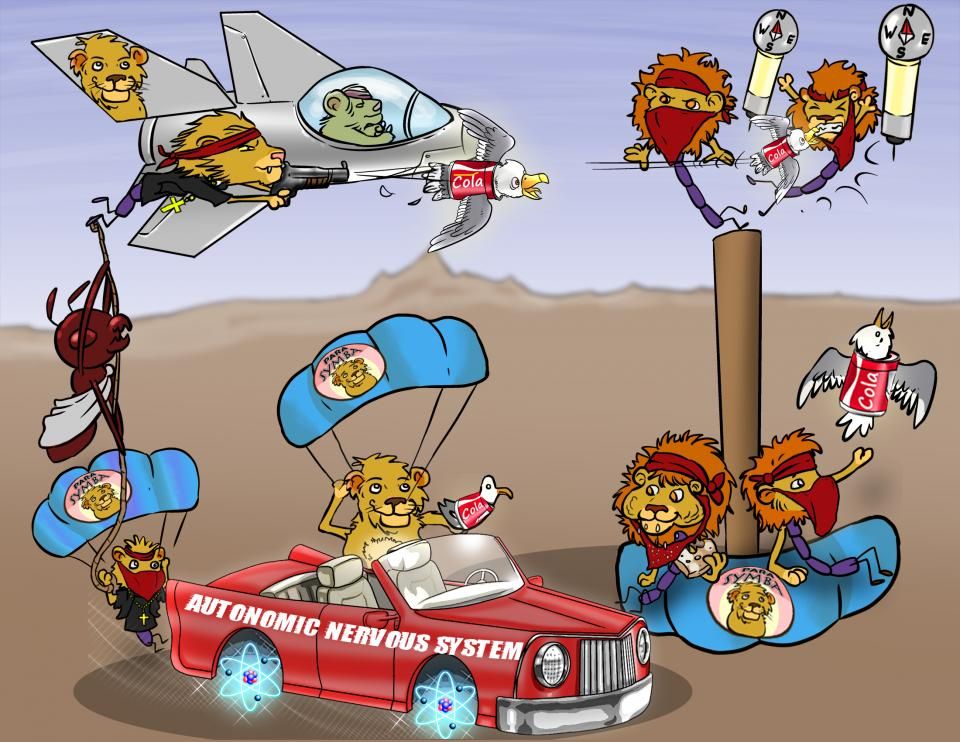 Okay, let’s start with the somatic nervous system, which describes a set of nerve fibers that control voluntary actions and convey sensory information from the skin, skeletal muscles and joints. Somatic sensory fibers allow transmission of sensory information such as touch, pain, temperature, and proprioception. For example, somatic sensory fibers inform our CNS that our cup of coffee is too hot. Then there are somatic motor fibers, which only innervate skeletal muscle and control voluntary actions of the body, like putting the coffee cup back on the table until it cools down.

On the flip side, the autonomic nervous system controls the involuntary activities within the body. This system consists of visceral motor fibers that carry motor signals to smooth muscle, such as that found in the intestinal walls that allow for peristalsis to occur, as well as cardiac muscle, and glandular tissue.

Now, there is also a unique set of sensory neurons we want to mention called special sensory fibers, which relay sensory information related to our special senses, such as smell, sight, taste, hearing and balance back to the CNS for interpretation. These fibers are not really classified as part of the somatic or autonomic nervous system. However this information can modulate the activity of the somatic motor system, such as sending signals to skeletal muscles to turn your head in response to a sound, or the autonomic nervous system, such as stimulating salivary glands in response to the smell of a freshly baked apple pie!

All right, now you’ve probably heard about the ‘fight or flight’ response, which kicks in when one encounters an alarming situation, like seeing a bear on your hike, or before taking an exam. These situations activate the SNS, which prepares the body to respond to extreme or stressful situations. For example, the sympathetic nervous system will cause dilation of the pupils to improve vision, increased heart rate and blood pressure, and diversion of blood flow to the organs that will help with our fight or flight response, like skeletal muscles and the brain. On the flip side, organs that are not urgently needed to address the immediately stressful situation, like the kidneys and the gastrointestinal tract, are toned down.

Ok, so once that bear is gone, or the exam is over, the parasympathetic nervous system kicks in to calm things down. It does so by decreasing your heart rate and blood pressure, increasing gut motility and digestive secretions and by allowing blood to flow back to the organ systems that have been put on hold by the sympathetic nervous system, like the digestive system. These effects can be summarized as the body’s ‘rest and digest’ response. In a nutshell, you can think of these two divisions of the ANS like a seesaw, where they work together to balance each other out.

Alright, as a quick break, let’s see if you can answer the following questions: What are the main divisions of the peripheral nervous system? How about the different components of the autonomic nervous system?

Now, information that’s conveyed in the autonomic nervous system passes from the CNS, to its target organ through a two neuron system. The first neuron sending a signal from the central nervous system is called a preganglionic - or presynaptic - neuron, and the second neuron that the preganglionic neuron synapses with is called a postganglionic - or postsynaptic - neuron. This second neuron is usually the effector neuron, meaning that it then directly synapses on the organ that it acts on.

Fourth and finally, the preganglionic fibers can pass through the paravertebral ganglia without synapsing and instead, they continue via splanchnic nerves to one of a number of prevertebral ganglia, located anterior to the aorta, and synapse there. These ganglia are named according to the main aortic branch that they’re positioned near. The most superior are the paired celiac ganglia, found around the celiac trunk, just below are one or more superior mesenteric ganglia, followed by the inferior mesenteric ganglion.

The somatic nervous system is the part of the peripheral nervous system associated with voluntary body movements. It consists of nerve fibers that control voluntary actions and convey sensory information input from the skin, skeletal muscles, and joints.

The sympathetic nervous system is responsible for the "fight or flight" response. It's activated when we're in danger or under stress, and it causes all of the body's systems to work faster so that we can either fight or run away.

The parasympathetic nervous system is responsible for "rest and digest" mode. It's activated when we're relaxed and not in danger, and it causes all of the body's systems to work more slowly so that we can rest and digest food.