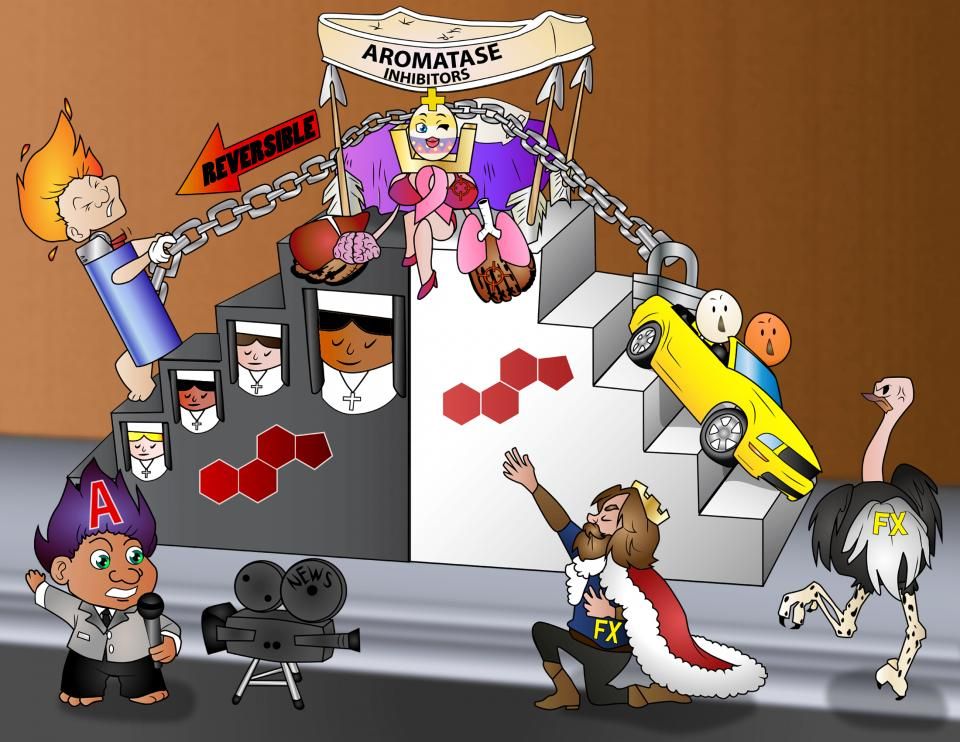 Aromatase inhibitors, or AIs, are a type of medication used to treat breast cancer in postmenopausal people.

However, they should only be used if the breast cancer is positive for estrogen receptors.

It’s the most common cancer in female individuals, and the second leading cause of cancer deaths after lung cancer.

Breasts are made up of 15 to 20 lobules, and inside each of these lie a bunch of grape-like structures called the alveoli.

Zooming in on the alveoli, there’s a layer of alveolar cells that secrete breast milk into the lumen, which is the space in the center of the gland.

These alveolar cells have receptors for certain hormones like, estrogen and progesterone, which are released by the ovaries, and prolactin which is released by the pituitary gland.

Just like healthy alveolar cells, some breast cancer cells have hormone receptors that allow them to grow in the presence of the hormones.

When breast cancer cells have estrogen receptors, the cancer is called an ER-positive carcinoma.

In this case, hormonal therapy is useful for adjuvant treatment, and includes medications which block the formation or effects of estrogen.

Aromatase inhibitors block the formation of estrogen by inhibiting the aromatase enzyme that converts androgen to estrogen.

Now, before menopause, estrogen is mainly synthesized by the ovaries, where there’s a lot of androgen waiting to be converted.

And the amount of aromatase enzyme in the ovary depends on the stimulation by gonadotropin.

So, even if we gave this medication to premenopausal women with breast cancer, gonadotropin would induce synthesis of more aromatase, which would synthesize more estrogen.

However, in postmenopausal women, estrogen is synthesized by other tissues, like the adrenal glands and fat tissue.

Here, aromatase levels don’t depend on gonadotropin, so AIs can decrease aromatase and lower estrogen levels in postmenopausal women.

Now, there are two main types of aromatase inhibitors.

Type I AIs are steroidal agents that irreversibly bind to aromatase and prevent androgens from binding.

Type II AIs, on the other side, are non-steroidal agents.

They’re also competitive inhibitors, but in this case, they bind reversibly.

Non-steroidal AIs include anastrozole and letrozole, while exemestane is a steroidal inhibitor.

All these medications are given daily peroral.

Fortunately, in general these medications are well tolerated.