Terbutaline functions via agonism at receptors in the uterus and bronchial smooth muscle. 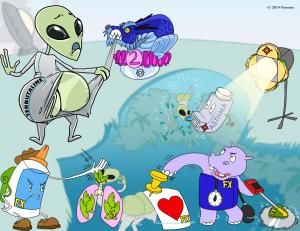 Uterine stimulants and relaxants, as their names suggest, are medications used to induce or inhibit contractions of the uterus.

Uterine stimulants are also called uterotonics, because they increase the tone of the muscles of the uterus.

They’re mainly used to induce or facilitate labor, to reduce postpartum hemorrhage, and to induce abortion.

Uterine relaxants are also called tocolytics, where ‘toco-’ refers to childbirth, and ‘-lytic’ means to terminate.

They’re used to stop premature labor inorder to give time for the fetal lungs to mature.

So, the uterus is a super important organ in the female body, because not only does it allow the development of the baby during pregnancy, but it also generates the force necessary to push out that tiny human during labor.

This force results from the muscle contractions that take place in the middle layer of the uterus, the myometrium.

The regulation of these muscle contractions happens at the cellular level, and it all comes down to the activity of myosin light-chain kinase by calcium ions.

On the other hand, this enzyme can be turned off via phosphorylation by protein kinase A, which causes the muscles to relax.

Normally, this happens at some point when the fetus is considered full term, which means all their organs are functional and it’s able to live outside mommy’s womb. This typically happens between 37 and 42 weeks’ gestation.

Sometimes labor doesn’t start even though it’s been more than 42 weeks. In these cases, it should be induced by the administration of uterine stimulants which include oxytocin, ergonovine, and prostaglandins.

In other situations the baby, the mother, or both, are at risk if the pregnancy continued.

These include fetal growth restriction, isoimmunization, premature rupture of the membranes, pre-eclampsia, or eclampsia.

Uterotonics are also indicated to augment labor when the contractions aren’t strong enough, and they have the added benefit of preventing postpartum hemorrhage by compressing uterine blood vessels. Finally they can be used for therapeutic abortion.

Okay, let’s look at the uterotonics starting with oxytocin.

PLC then cleaves a phospholipid called phosphatidylinositol 4,5-bisphosphate into inositol trisphosphate and diacylglycerol.

Inositol trisphosphate is soluble and diffuses freely through the cytoplasm and into the endoplasmic reticulum where it opens up calcium channels.

Now, oxytocin is given via intravenous infusion and the main indication is for labor induction. In fact, it’s the drug of choice for this purpose.

But it’s also indicated in facilitation of labor, and to prevent or treat postpartum hemorrhage. In the last case by intramuscular injection.

But oxytocin not only exerts actions on the uterus, which causes some side effects.

On blood vessels, for example, it causes vasodilation, which ultimately leads to hypotension and reflex tachycardia.

For this reason, fluids should be carefully administered. Otherwise, they can cause water intoxication, leading to coma, or even death.

On the other hand, in patients who are suffering preeclampsia, or hypertension during pregnancy, and those with cardiac or renal disease, water retention can be an issue, and extra care must be taken.

Finally, a situation called uterine hyperstimulation can occur where uterine contractions are too long, lasting two minutes or more, or too frequent, with five or more in ten minutes.

Uterine hyperstimulation can cause uterine rupture or impaired oxygen delivery to the baby. Which are obviously serious complications. So if this happens, oxytocin administration should be discontinued right away.

Now, moving on to ergonovine, the exact mechanism of action isn’t completely understood, but it certainly stimulates uterine contraction.

Unlike oxytocin ergonovine is only used to prevent or treat postpartum hemorrhage because ergonovine can cause prolonged tetany of the myometrium, so it should not be used for induction or facilitation of labor. It can be given by intramuscular or intravenous injection.

Besides uterine contraction, ergonovine causes vasoconstriction, which increases blood pressure. So, it should be avoided in patients with hypertension.

Also, ergonovine can cause vasospasm of the arteries that perfuse the heart and trigger angina.

Other side effects include nausea, vomiting, blurred vision, and headache.

Okay, so the last type of uterotonic agents are prostaglandins, which include dinoprostone and misoprostol.

They exert their actions by stimulating Gq protein coupled receptors, just like oxytocin.

They’re also used to facilitate labor and to prevent or treat postpartum hemorrhage.

But, dinoprostone and misoprostol are also indicated to induce abortion after the administration of mifepristone or methotrexate. They can be administered orally, vaginally or intracervically.

Some side effects include nausea, vomiting, and diarrhoea, as well as uterine pain, and uterine hyperstimulation.

Let’s switch gears and talk about uterine relaxants or tocolytics.

Sometimes labor begins too early. If this happens before the 37th week of gestation, the fetal organs, especially the lungs, might not be fully developed.

If the baby’s born in this condition, they may not be able to breath, or have other serious complications, like pulmonary hypertension, or intracranial hemorrhage.

So, in this case, labor can be suppressed with uterine relaxants, thus giving the fetus a few more days in the uterus.

During this time, the mother can be given glucocorticoids to stimulate maturation of the fetal lungs.

Uterine relaxants include selective β2-adrenoceptor agonists, calcium channel blockers, cyclooxygenase inhibitors and oxytocin receptor antagonists; and the indication for all of them is the same: prevention or arrest of preterm labor.