What Is It, Transmission, Symptoms, Treatment, and More

Bronchiolitis is an infection of the small airways of the lungs, called bronchioles, that can commonly affect babies and young children under the age of two. Incidence is higher in premature babies and children with congenital lung or heart disease. In general, bronchiolitis is more common during winter months.

Bronchiolitis is mostly caused by a viral infection of respiratory syncytial virus (RSV). Other, less common causes of bronchiolitis, include other viruses such as rhinovirus, adenovirus, human bocavirus, human metapneumovirus, influenza, and parainfluenza virus, as well as bacteria such as mycoplasma pneumoniae.

Bronchiolitis presents with inflammation of the bronchioles, and may affect one or several lobes of the lung. Over time, mucus plugs can develop, leading to a partial or complete block of the airways. In severe cases, complications can include atelectasis (tiny airways collapse) and air trapping (air can enter the lung during inhalation, but gets trapped during exhalation). In addition, if these processes occur in different regions of the lungs at the same time, they can lead to hypoxemia (low blood-oxygen levels) and breathing problems. 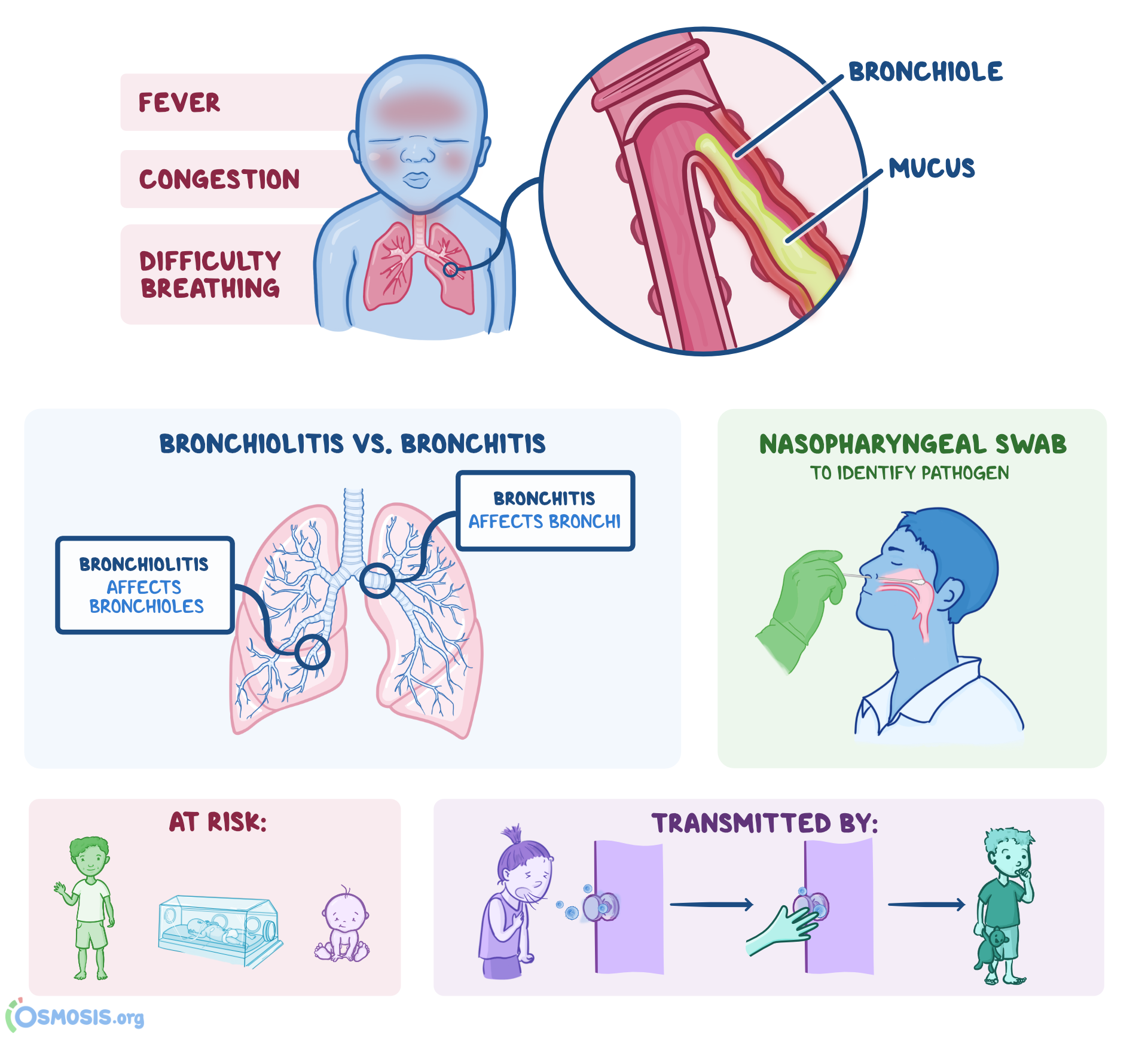 Can adults get bronchiolitis?

Yes, adults can get bronchiolitis. However, adults have larger airways than children, which makes them less susceptible to the condition. Additionally, the causes in adults are different than the causes associated with bronchiolitis in children.

What is the difference between bronchitis and bronchiolitis?

How is bronchiolitis transmitted?

Bronchiolitis is transmitted by spreading pathogens from one person to another. Usually, pathogens spread when infected people cough, sneeze, or even talk, releasing tiny saliva droplets in the air. These droplets can then infect another person when they land on that person’s mouth, nose, or eyes. Another way pathogens can spread is through contact transmission. This refers to saliva droplets that land on object surfaces such as door handles, and then spread to the next person that touches these surfaces and once they touch their eyes, nose, or mouth.

After the pathogen-containing droplets spread to the next person, infection can result when the inoculum size (amount of virus) is sufficient or the host immune system is impaired. At the bronchioles, pathogens can infect and kill respiratory epithelial cells, triggering an inflammatory reaction. This causes surrounding epithelial cells to secrete more mucus, forming plugs of mucus and dead cells, and ultimately blocking the airways.

What are the main risk factors for bronchiolitis?

The main risk factors for bronchiolitis—as well as for developing complications from it—include being under two years of age; premature birth; not being breastfed; and having additional medical conditions like congenital lung or heart disease, immune system disorders, and neuromuscular disorders that make it harder to clear the airways.

What are the signs and symptoms of bronchiolitis?

The initial clinical presentation of bronchiolitis is similar to that of the common cold, with symptoms like congestion, runny nose, cough, sore throat, and mild fever. Physical exam findings typically include wheezing, or crackles. More severe cases can develop trouble breathing or hypoxia (low oxygen levels).

Infants and young children can also experience signs of difficulty breathing, such as tachypnea (rapid breathing), nasal flaring, grunting sounds, intercostal retractions, and even apnea, which are short periods of time where breathing completely stops. In addition, infants and young children can be at increased risk of dehydration, as respiratory distress can lead to decreased fluid intake, as well as increased fluid loss due to fever and tachypnea (rapid breathing).

Can bronchiolitis turn into pneumonia?

Bronchiolitis is an infection that typically resolves on its own, without severe complications. However, in rare cases, the weakening of the immune system can cause the secondary overgrowth of bacteria, leading to pneumonia.

How do you diagnose bronchiolitis?

The diagnosis of bronchiolitis is mostly clinical, based on the presenting symptoms, the age of the child, and the time of the year (as it is more common during winter). Identification of the exact pathogen causing the disease is not necessary for treatment, but can be done through a nasopharyngeal swab. This is done by swabbing epithelial cells from the nasopharynx and looking for the presence of viral antigens.

Chest x ray is not routinely used, but is recommended in severe cases of bronchiolitis to rule out bacterial pneumonia. Typical X-ray findings of bronchiolitis include fullness of the central, perihilar region of the lung.

How do you treat bronchiolitis?

There’s no specific treatment for bronchiolitis. Treatment is mostly supportive, which means it aims at managing the symptoms, rather than the cause of the disease itself. Treatment may include home care, rest, adequate hydration, and fever-reducing medications (acetaminophen or NSAIDs). In addition, keeping an upright position can help people breathe better. Individuals that develop hypoxia may need to be hospitalized and get supplemental oxygen. Finally, those who are at higher risk for serious complications can be given preventive treatment with monthly injections of palivizumab (synagis), which is a monoclonal antibody against RSV.

What are the most important facts to know about bronchiolitis?

Bronchiolitis is an infection of the bronchioles, most often affecting young children. and leads to airway blockage due to mucus plugs in one or several lobes of the lung. Bronchiolitis is transmitted by spreading pathogens from one person to another through respiratory droplets, either in the air or on surfaces. The most frequent pathogen is RSV. Usually, symptoms appear very similar to that of the common cold, through some cases may develop difficulty breathing and hypoxia. Diagnosis is generally made based on the clinical presentation, and treatment is mostly supportive. 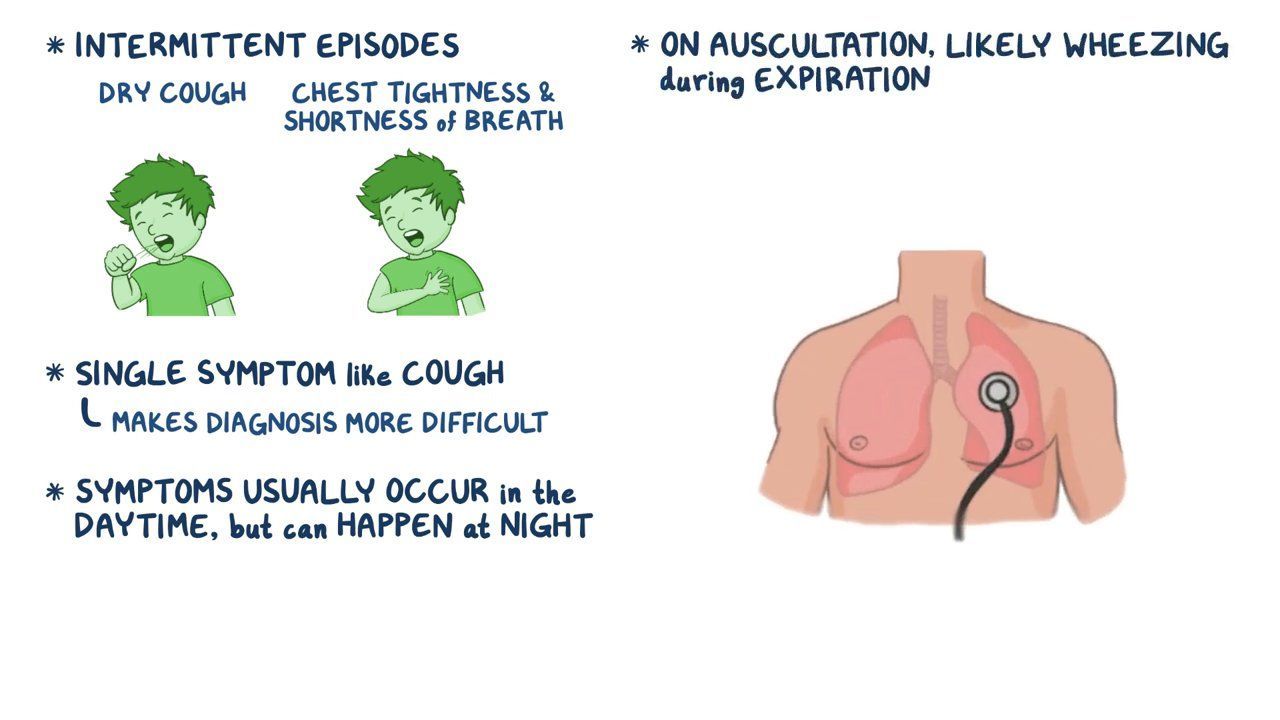 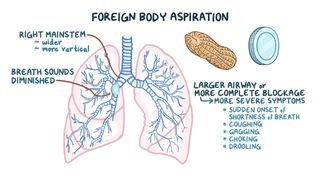 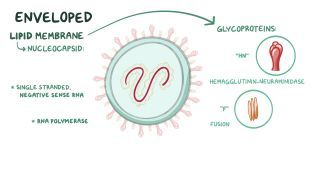 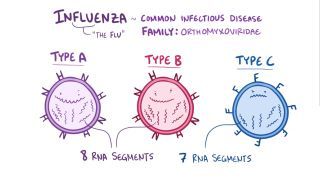 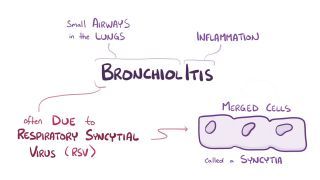