What is cauliflower ear?

Cauliflower ear, also known as wrestler’s ear, is a long-term complication of an auricular hematoma, resulting in a deformity of the outer portion of the ear. Auricular hematomas refer to collections of blood within the outer ear (i.e., auricle or pinna) that is usually caused by blunt trauma to the area. Severe ear injury can diminish blood flow to the cartilage from the perichondrium, the connective tissue surrounding the cartilage. This can give the ear a puffy, pale, cauliflower-like appearance, hence the term cauliflower ear. The prevalence of cauliflower ear is greatest amongst high-level athletes involved in high-risk contact sports, such as martial arts, wrestling, boxing, and rugby. 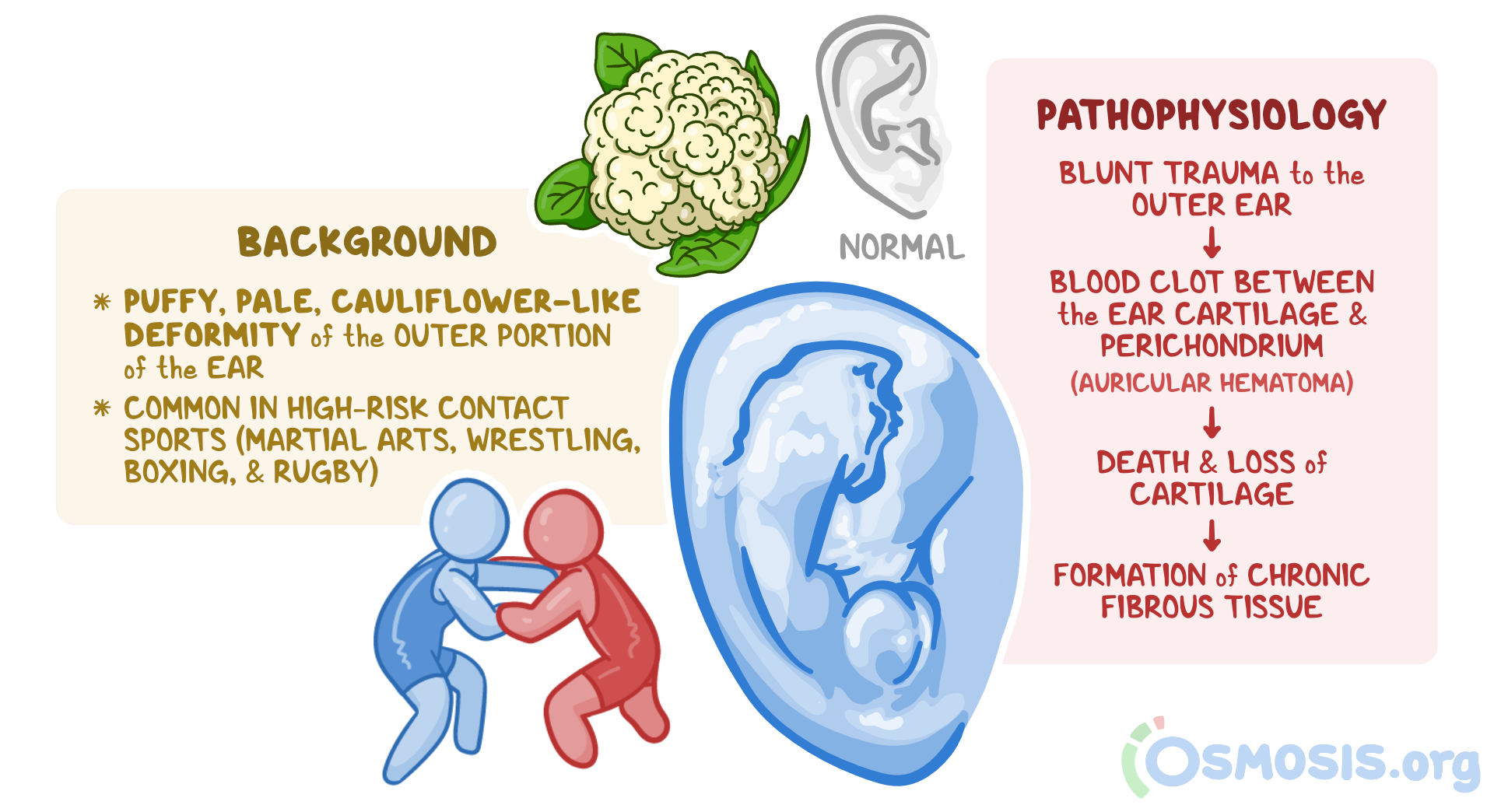 Cauliflower ear is most commonly due to blunt trauma to the outer ear, which is composed of a thin layer of skin, perichondrium, and cartilage. Blunt trauma can often cause blood clots known as an auricular hematomas, resulting in collections of blood in the area between the ear cartilage and the perichondrium. A hematoma will separate the perichondrium from the cartilage, disrupting the blood supply to the cartilage. If left untreated, this can lead to death of the cartilage (i.e., necrosis), loss of cartilage, and subsequent formation of chronic fibrous tissue that resembles cauliflower. Diminished blood supply can also increase the risk of infection. Risk factors for developing cauliflower ear include competing in high-risk contact sports, such as martial arts (e.g., Brazilian jiu-jitsu, mixed martial arts), boxing, wrestling, and rugby. Additionally, individuals taking anticoagulant medications, also called blood thinners, are at an increased risk of excessive bleeding, which can increase the likelihood of an auricular hematoma and consequent cauliflower ear.

What are the signs and symptoms of cauliflower ear?

Individuals with an auricular hematoma usually present with a red, swollen, tender, and warm ear. They may also experience pain and hearing loss. If left untreated, the outer ear may wrinkle and appear pale due to the diminished blood flow, giving rise to the cauliflower-like appearance characteristic of cauliflower ear.

Individuals with relapsing polychondritis may experience similar symptoms in other areas of cartilage, such as the joints.

How is cauliflower ear diagnosed?

Diagnosis of cauliflower ear is usually based on clinical findings, including the appearance of the ear and associated symptoms, as well as a history of direct trauma to the ear. In most cases, no further laboratory testing or imaging is necessary. If, however, there is any indication of severe head trauma, such as neurologic symptoms or loss of consciousness, further evaluation with a computerized tomography (CT) scan of the head should be performed.

If cauliflower ear presents in children not involved in contact sports or in elderly individuals, it may be indicative of abuse, and clinicians should screen accordingly.

For the diagnosis of relapsing polychondritis, specific diagnostic criteria should be met, including clinical, laboratory, imaging, and biopsy findings.

How is cauliflower ear treated?

Individuals with traumatic ear injury and subsequent auricular hematoma should seek medical advice and care within 6 hours of the initial injury, before cartilage necrosis occurs. Prompt treatment decreases the probability of developing cauliflower ear. Aspiration, or the removal of the accumulated blood with a needle, and pressure dressing of the ear with bandages is usually required as a first line of treatment. For individuals who seek treatment after the initial 6-hour window, an invasive incision may be required to remove blood clots and prevent cartilage necrosis. Follow-up after the initial treatment is important for all individuals in order to monitor for and prevent reaccumulation of blood or fluid in the area.

Prevention is the most successful means of dealing with trauma-induced cauliflower ear. Therefore, athletes competing in high-risk sports are advised to wear protective headgear in order to prevent cauliflower ear.

In cases of relapsing polychondritis, steroids and nonsteroidal anti-inflammatory drugs (NSAIDs) may be part of treatment.

Does cauliflower ear go away?

In general, cauliflower ear does not go away on its own. After fibrous tissue has formed, the deformity of the ear is irreversible unless cosmetically removed.

What are the most important facts to know about cauliflower ear?

Cauliflower ear is a long-term complication of an auricular hematoma, resulting in a deformity of the outer portion of the ear. It is usually caused by blunt trauma to the ear or a rare rheumatological condition called relapsing polychondritis. Cauliflower ear is common in high-risk contact sports, such as martial arts. Following the initial ear injury, blood collects in the area between the ear cartilage and the perichondrium, leading to the development of an auricular hematoma, or blood clot. The hematoma separates the perichondrium from the cartilage and disrupts the cartilage’s blood supply. If left untreated, this can lead to necrosis in the outer ear, loss of cartilage, and subsequent formation of fibrous tissue with a pale, wrinkled, cauliflower-like appearance. Diminished blood supply can also increase the risk of infection. Individuals with an auricular hematoma usually present with a red, swollen, tender, and warm ear. Diagnosis of cauliflower ear is clinical, based on the signs and symptoms of the disorder, along with a history of direct trauma to the ear. Further evaluation with a head CT scan should be performed in individuals with neurologic symptoms or loss of consciousness. Individuals with traumatic ear injury and subsequent auricular hematoma should seek care within 6 hours after the injury to avoid cartilage necrosis. Aspiration of the accumulated blood with a needle, followed by pressure dressing of the ear, is usually the initial treatment. For individuals who present after the first 6-hour window, more invasive procedures are generally recommended.

Quiz yourself on Cauliflower Ear 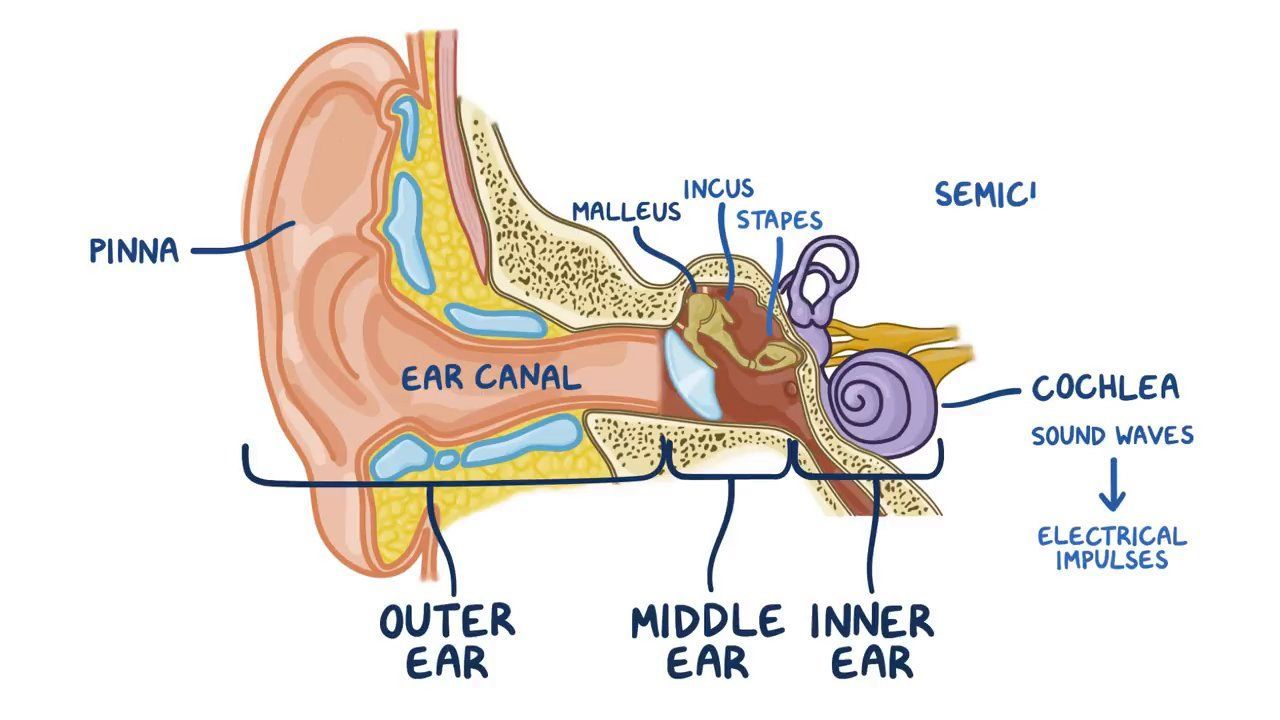 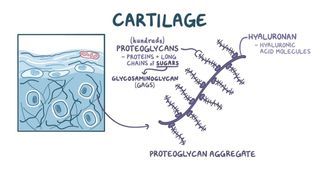 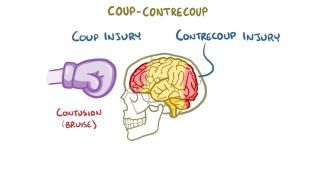 Madormo, C., & Biggers, A. (2017, June 1). Everything you should know about cauliflower ear. In Healthline. Retrieved April 10, 2021, from https://www.healthline.com/health/cauliflower-ear#outlook