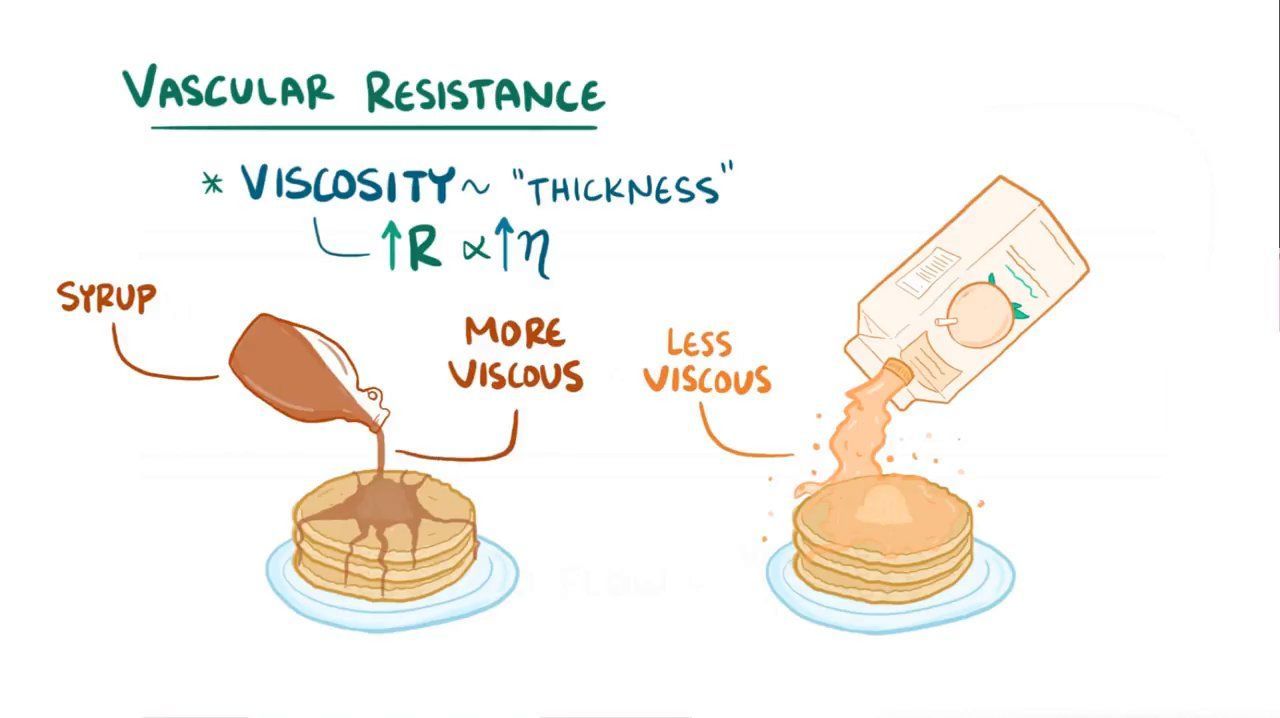 In conditions such as polycythemia, blood viscosity is increased which causes (increased/decreased) resistance.

A 64-year-old Caucasian male undergoes cardiac bypass surgery without any complications. You want to wean this patient from bypass. For a standard weaning plan, it would not be necessary to obtain which of the following to calculate systemic vascular resistance (SVR):

Blood flow refers to the volume of blood travelling through a blood vessel, an organ, or the entire body over a period of time, and it can be measured as liters per minute. As blood flows, it encounters various factors that resist flow and movement of blood, known as the vascular resistance.

The first factor to contribute to vascular resistance is blood viscosity, where you can think of viscosity as the fluid’s thickness, or how sticky it is. The relationship is directly proportional, which can be represented as resistance ∝ η which is the greek letter eta and represents viscosity. So this means that as viscosity goes up, it’s harder it is for the liquid’s molecules to slide past each other, and the resistance goes up. Think about a heaping stack o’ pancakes, then picture some maple syrup. Even on flipping the syrup upside down it doesn’t really come out right away and resists moving right away; slowly it gloops out and doesn’t splash but just coats those pancakes in a delicious film of sugary goodness, oh right. Now, with another stack, grab some orange juice and pour...it immediately comes out and pretty goes everywhere. This is because the the juice is less viscous than the syrup, so there’s going to be less resistance to movement. Because blood is full of large proteins and cells, it’s pretty viscous and moves much more slowly than just plain water, or orange juice. Blood viscosity doesn’t change much over time, but certain conditions like polycythemia, where the person has too many red blood cells, can increase viscosity, and conditions like anemia, where the person doesn’t have enough red blood cells, can decrease viscosity.

A second factor that affects resistance is total blood vessel length. Just like with viscosity, the relationship is directly proportional, and this can be represented as resistance ∝ L, so, simply put, shorter vessels have less resistance and longer vessels have more resistance because there’s more friction resisting flow. This means that as a child grows into an adult, their blood vessels will get longer, and their peripheral resistance will go up.

A third factor that affects resistance is blood vessel radius, which in this case is inversely proportional to resistance...to the fourth power! Meaning that that as a vessel’s radius goes down, its resistance really goes up. Unlike viscosity and length, the radius can change from minute to minute, especially the radius of arterioles, which can vasoconstrict like when you’re lying at home on the couch, which would decrease diameter and increase resistance, or vasodilate like when you’re running outside playing frisbee, which would increase diameter and decrease resistance.

Now, the equation relating all these variables is resistance R is equal to 8 times viscosity eta times length L divided by pi times radius r to the fourth power.

Now keep in mind that resistance is also related to blood pressure and blood flow by the relationship: Q = . So let’s apply this to a real-life situation, let’s say a person has a blood flow of 300 ml/min going through their carotid artery and they suddenly develop a blockage of exactly half of the artery, which can happen in a stroke, what would happen to the blood flow? Well, a 50% blockage means that the radius is now ½ of what it was, and looking at our equation, since nothing else has changed, plugging in 1/2r for our original r, we get ½ r to the fourth or 1/16 r, meaning resistance goes up by 16 times! iAssuming that the blood pressure doesn’t change right away, subbing in this new 16 times greater resistance, we see that the blood flow drops by 16 times,i from 300 ml/min to 300 ml/min / 16 = 19 ml/min, which is a huge drop!