What Is It, Its Purpose, and More

What is cellular respiration?

Cellular respiration is a metabolic pathway that uses glucose to produce adenosine triphosphate (ATP), an organic compound the body can use for energy. One molecule of glucose can produce a net of 30-32 ATP. 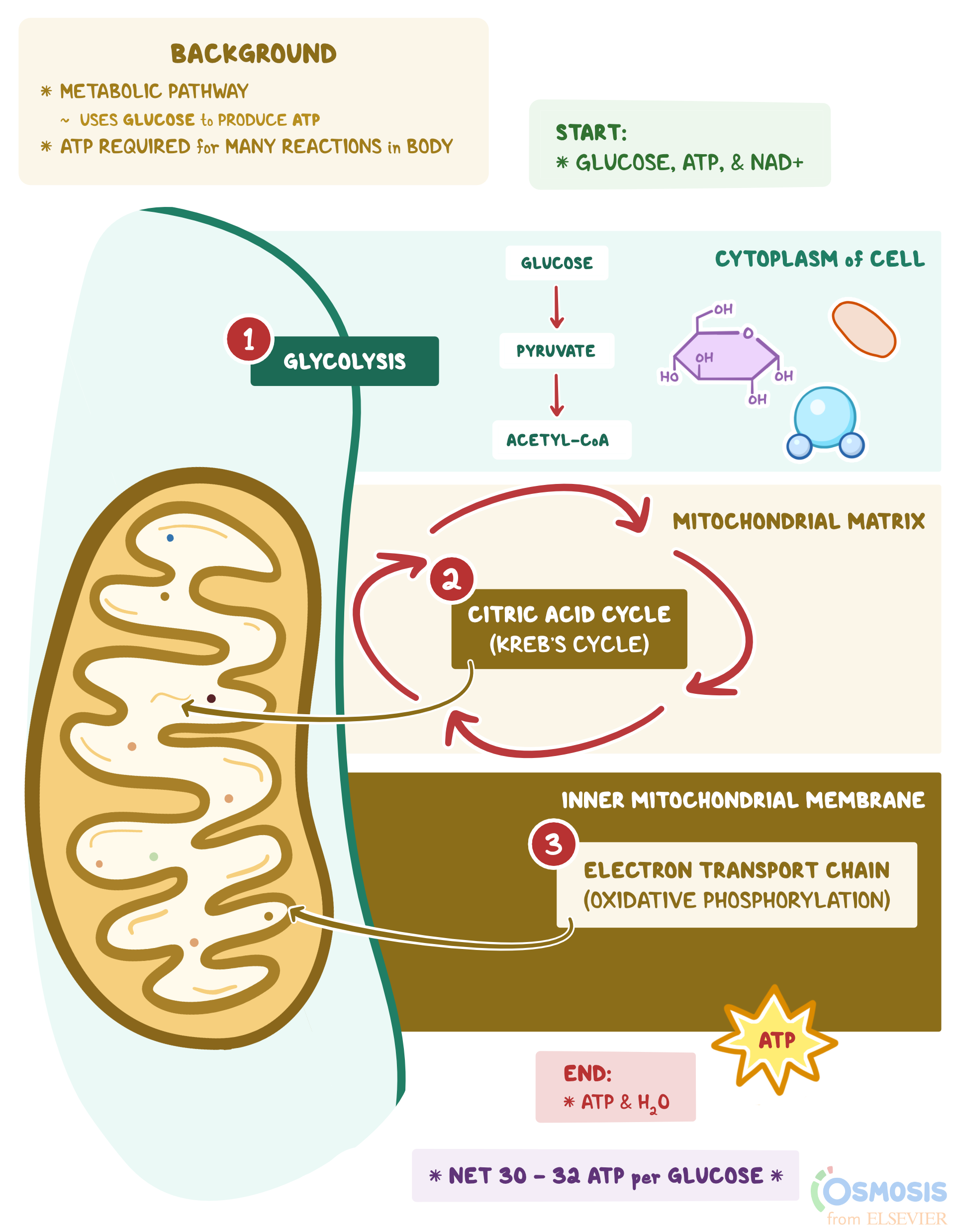 What is the purpose of cellular respiration?

Cellular respiration is used to generate usable ATP energy in order to support many other reactions in the body. ATP is particularly important for energetically unfavorable reactions that would otherwise not occur without an energy input.

What are the main steps of cellular respiration?

Glycolysis is the initial breakdown of glucose to pyruvate, a three carbon structure, in the cytoplasm. The pyruvate then moves into the mitochondrial matrix where a transition step called pyruvate oxidation takes place. In this process, pyruvate dehydrogenase converts the three-carbon pyruvate to the two-carbon acetyl-CoA. The TCA cycle begins when acetyl-CoA combines with a four-carbon oxaloacetate in order to form the six-carbon citrate. Because each molecule of glucose produces 2 pyruvate molecules, it takes two turns through the Krebs cycle to completely break down the original glucose.

Finally, the electron transport chain is a series of redox reactions powered by high energy electrons that pumps protons across the membrane, creating a proton gradient. Together, an electrochemical gradient is created. At the end of the electron transport chain, the final electron acceptor, O2, combines with protons to produce water (H2O). Meanwhile, ATP synthase uses the movement of protons back into the mitochondrial matrix for ATP synthesis.

Where does cellular respiration take place?

What are the reactants of cellular respiration?

The reactants of cellular respiration vary at each stage, but initially, it requires an input of glucose, ATP, and NAD+. NAD+, a nicotinamide derived from vitamin B3, is a universal electron acceptor that is crucial in the process of cellular respiration. Another important universal electron acceptor is FAD, a flavin nucleotide from vitamin B2. These acceptors are often used in catabolic processes and are reduced into NADH and FADH2, respectively.

Glycolysis requires an input of glucose, two ATP, two ADP, and two NAD+. Reactants for pyruvate oxidation are pyruvate, NAD+, and coenzyme A (CoA). One TCA cycle requires acetyl-CoA, one ADP, three NAD+, and one FAD. Finally, oxidative phosphorylation and the electron transport chain use the reactants ADP, NADH, FADH2, and O2.

What are the products of cellular respiration?

The final end products of cellular respiration are ATP and H2O. Glycolysis produces two pyruvate molecules, four ATPs (a net of two ATP), two NADH, and two H2O. Therefore, without the presence of oxygen, glycolysis is the only process that can occur, and only two ATP molecules may be produced for each glucose molecule.

When oxygen is present, pyruvate oxidation produces one acetyl-CoA, one NADH, and one CO2 per pyruvate molecule. The TCA cycle then yields one GTP (i.e., an energy-rich compound similar to ATP used primarily in lower pH environments), three NADH, one FADH2, and two CO2. NADH and FADH2 can then be used by the electron transport chain to create further ATP as part of oxidative phosphorylation. Finally, oxidative phosphorylation and the electron transport chain produce 28-30 ATP and 28-30 H2O per glucose. As a result, the whole process of cellular respiration ends up yielding 30-32 ATP per molecule of glucose.

What are the rate-determining enzymes in cellular respiration?

There are three primary rate-determining enzymes in cellular respiration. These enzymes catalyze the rate-limiting steps, which are the slowest reactions in the series.

The rate determining enzyme in glycolysis is phosphofructokinase-1, or PFK-1, which converts fructose-6-phosphate to fructose-1,6-bisphosphate. It is stimulated by AMP, fructose-2,6-bisphosphate, and inhibited by ATP and citrate.

Pyruvate oxidation only uses pyruvate dehydrogenase, which is activated by increased NAD+, ADP, or Ca2+.

In the TCA cycle, the rate determining enzyme is isocitrate dehydrogenase, which converts isocitrate to ɑ-ketoglutarate. The specific reaction is stimulated by ADP and inhibited by ATP and NADH.

What diseases can affect cellular respiration?

Deficiencies in the pyruvate dehydrogenase enzyme can interfere with pyruvate oxidation. These can result in lactic acidosis characterized by a build-up of lactate and increased serum alanine due to pyruvate build-up that then undergoes fermentation to lactic acid. Children born with these deficiencies may have neurological defects, and management of the disease typically includes keto-diets or diets high in fats.

There are several enzymes in the TCA cycle that may be affected and result in disease, including succinyl-CoA synthase and fumarase. Many individuals with these disorders have involuntary muscle spasms and posture, called dystonia, and are deaf.

Mitochondrial myopathies are genetic disorders that may affect the production of enzymes involved in the electron transport chain or oxidative phosphorylation. These diseases are classically characterized by muscle weakness and fatigue and may include muscular paralysis.

What are the most important facts to know about cellular respiration?

Quiz yourself on Cellular Respiration 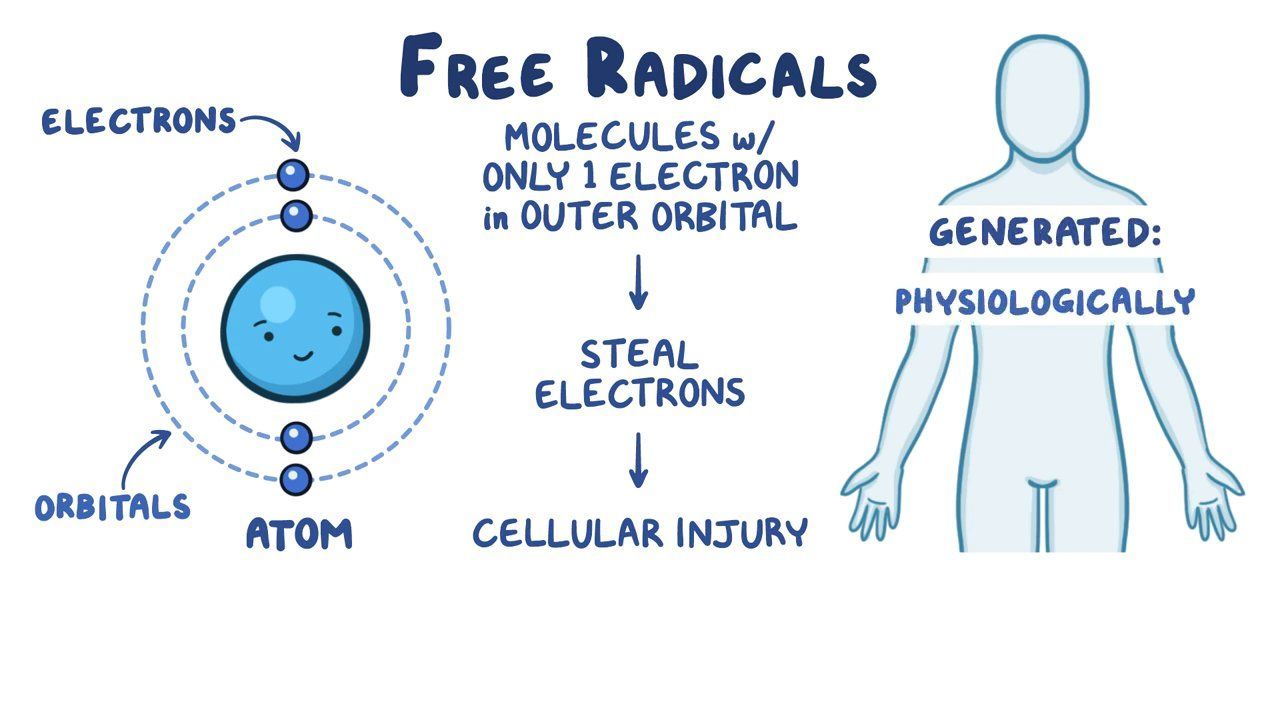 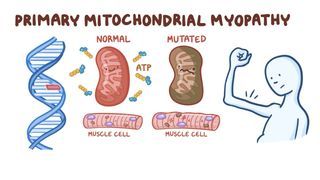 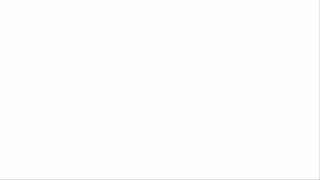 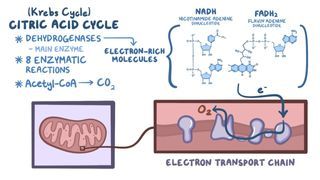 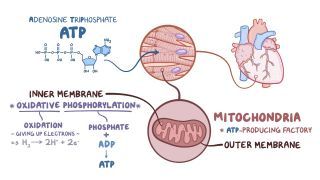