What is hypertonic dehydration?

Hypertonic dehydration, also known as hypernatremia, refers to an imbalance of water and sodium in the body characterized by relatively increased levels of sodium. Generally, when water is excreted from the body, electrolyte (e.g., sodium) concentrations in the blood increase. Hypertonic dehydration occurs when an individual excretes too much water without also excreting electrolytes, leaving the fluid that surrounds cells (i.e., extracellular fluid) with a high sodium concentration. A high concentration of sodium outside a cell will draw water out of the cell, towards the sodium. As water leaves the cell, the cell shrinks. 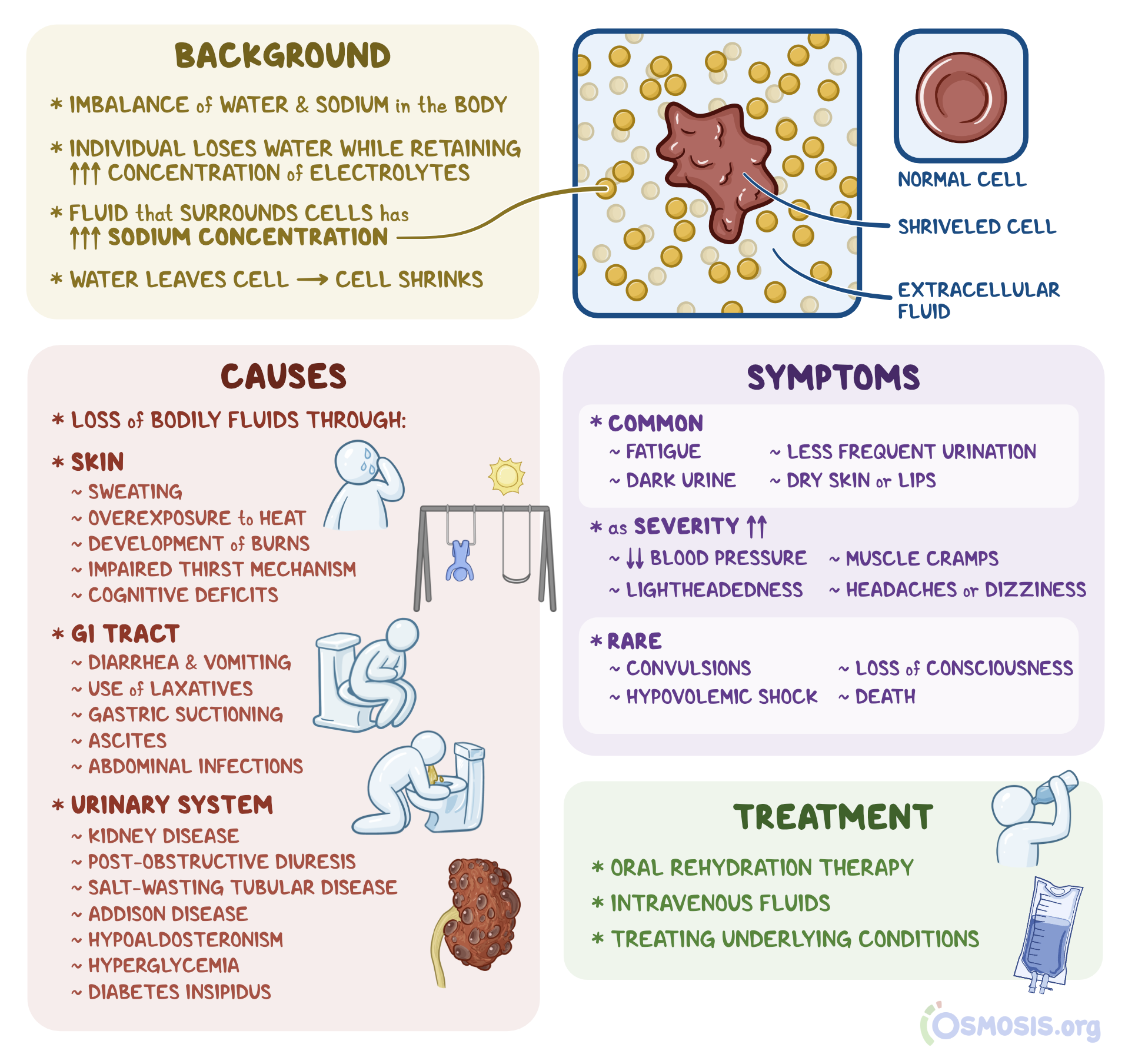 A variety of underlying conditions can cause hypertonic dehydration. Overall, all of these conditions result in loss of bodily fluids, usually through the skin, gastrointestinal (GI) tract, or urinary system.

Fluid loss through sweating and expiration often leads to hypertonic dehydration. Overexposure to heat, increased exercise, and the development of burns can increase this fluid loss. Additionally, if an individual has an impaired thirst mechanism, is immobile, or has cognitive deficits, their water intake may not compensate for the fluid lost.

Diarrhea and vomiting are common causes of dehydration due to rapid fluid loss through the gastrointestinal tract. Children with gastroenteritis, also known as the stomach flu, are especially susceptible to developing pediatric dehydration. Aside from illness, the use of laxatives, which are medications that stimulate bowel movements, may cause diarrhea and subsequent hypertonic dehydration. In some rare instances, hypertonic dehydration may result from development of a fistula, an atypical opening in the digestive tract. Gastric suctioning, a procedure to remove stomach contents, can lead to significant fluid loss. Abdominal swelling, known as ascites, and abdominal infections, such as pancreatitis and peritonitis, have also been linked to hypertonic dehydration.

In addition, there are many urinary and kidney-related fluid losses that can lead to hypertonic dehydration. These conditions include kidney disease, in which the kidneys are not functioning properly; post-obstructive diuresis, causing excessive water excretion through urine; salt-wasting tubular disease, marked by excessive water and salt excretion through urine; Addison disease, in which there is insufficient adrenal hormone secretion; hypoaldosteronism, characterized by reduced aldosterone levels; and hyperglycemia, characterized by high glucose levels. Moreover, diabetes insipidus, which occurs when the kidneys cannot regulate bodily fluids, typically leads to frequent urination and can cause hypertonic dehydration. The use of diuretics, medications used to increase urine excretion, may also lead to dehydration.

What are the signs and symptoms of hypertonic dehydration?

The signs and symptoms of hypertonic dehydration vary based on severity. Commonly, an individual may experience fatigue, dark urine, less frequent urination, dry skin, or dry lips. In addition to these, as severity increases, one may also present with decreased blood pressure (i.e., hypotension), lightheadedness, muscle cramps, headaches, or dizziness. Rarely, in severe situations, an individual may experience convulsions, hypovolemic shock, loss of consciousness, or death.

Hypertonic dehydration in children and infants may present with fewer tears when crying, lower urine output, or hollowing of the soft part of their skull.

How is hypertonic dehydration diagnosed?

To diagnose hypertonic dehydration, healthcare professionals may begin by asking about the individual’s medical history and medications. Additionally, they may inquire about circumstances that may have caused dehydration, such as recent exercise or exposure to heat. A physical exam and assessment of vital signs may also be performed.

In order to definitively diagnose hypertonic dehydration, a range of diagnostic assessments may be performed. Blood samples may be required to test for blood osmolality, which is a measure of electrolyte concentration that can indicate whether fluid has been lost. Blood test results that suggest hypertonic dehydration include elevated blood urea nitrogen (BUN), elevated glucose, elevated sodium, and possibly decreased calcium and potassium levels. Urine tests may show an elevated specific gravity (i.e., osmolality of the urine).

In some cases, ultrasound imaging may be used to determine fluid volume within blood vessels.

How is hypertonic dehydration treated?

Treatment of hypertonic dehydration is largely focused on fluid replacement to return the individual to euvolemia, or a healthy fluid-electrolyte balance. Mild dehydration can often be treated with oral rehydration therapy, if the individual can tolerate oral intake. If too much water is consumed without salt, there is a risk of developing cerebral edema, or swelling of the brain, in which brain cells burst.

Individuals with dehydration requiring intravenous fluids (i.e., IV fluids), who have been dehydrated for fewer than 24 hours, can usually experience rapid correction of their electrolyte levels. For those who have been dehydrated for more than 24 hours, rehydration with IV fluids must be slower. If IV fluids are introduced too quickly, cells may overcorrect by absorbing too much water, putting the individual at risk of cerebral edema.

In addition to correcting the fluid loss, healthcare professionals may also need to treat the underlying condition that caused the dehydration.

How do you rehydrate a severely dehydrated person?

Individuals with severe dehydration who do not respond to oral rehydration therapy may need to be administered fluids via IV.

How long does it take to rehydrate after being dehydrated?

What are the most important facts to know about hypertonic dehydration?

Hypertonic dehydration occurs when an individual loses water while retaining a high concentration of electrolytes, or sodium, causing an imbalance within the body. There are a variety of underlying conditions that can result in hypertonic dehydration, including diarrhea, vomiting, infection, kidney disease, abdominal infections, diabetes insipidus, and excessive sweating. Common symptoms of hypertonic dehydration include dry skin, dark urine, decreased urine production, and fatigue. However, as dehydration becomes more severe, one may experience additional symptoms, such as hypotension, muscle cramping, and dizziness. Bloodwork, urine samples, and imaging studies may be used to diagnose hypertonic dehydration. Treatment options generally depend on the severity of the dehydration. For individuals with mild dehydration, oral rehydration solutions can be administered. In more severe cases, rehydration via an IV solution may be necessary. Treatment length can range from hours to a few days. Additional treatment may be needed to address conditions that caused the dehydration.

Quiz yourself on Hypertonic dehydration 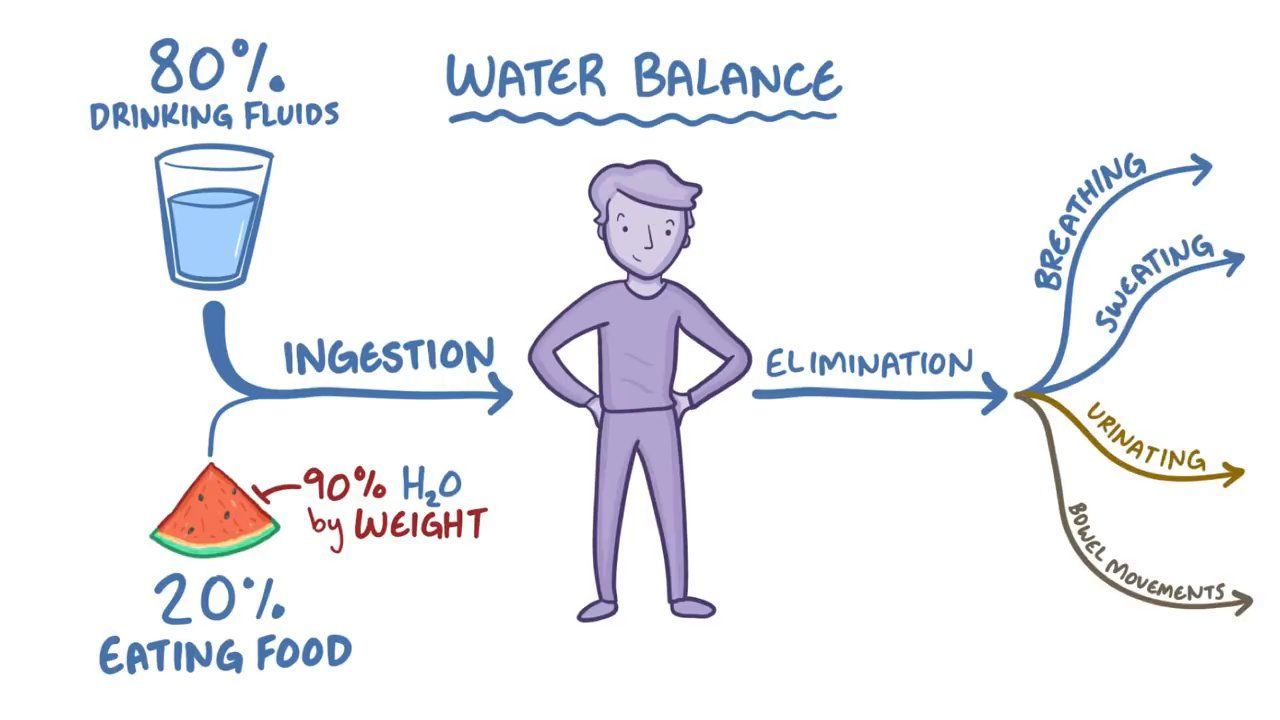 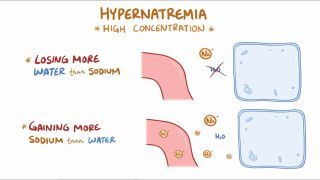 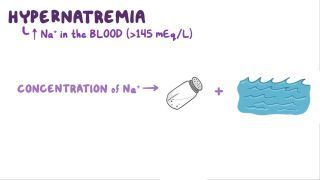 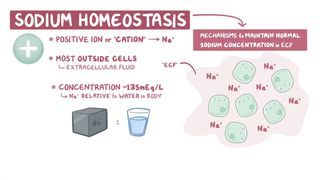 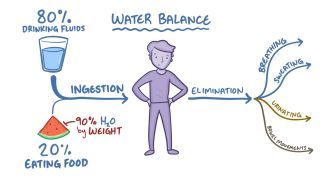 Gotter, A. (2018, September 4). Hypertonic dehydration: What you need to know. In Healthline. Retrieved from https://www.healthline.com/health/hypertonic-dehydration