Osmosis Prime uses proven learning science principles to empower current and future clinicians with the best learning experience possible. In this new blog series, Senior Content Manager Kyle Slinn explores the world of learning science, beginning with the concept of Elaborative Rehearsal. So, what is elaborative rehearsal, and how does it work?

If you’ve ever taken a psychology class, you’ve probably heard of famous psychologists such as Skinner, Maslow, Piaget, and so on. These psychologists are often attributed to a particular division of learning psychology which they studied like behavioristic, humanistic, and cognitive psychology. From their work (and the work of many other psychologists) learning theories were created and refined.

Learning theories are nothing more than a lens to view the world through. If you wear amber-tinted glasses, your perception of the world changes. Blue light fades away, and everything else is tinted orange. Is that good or bad? You decide.

Different learning theories have different viewpoints on how to tackle learning situations. Learning theories are nothing more than ideas. They’re not set in stone, and honestly a lot of the scientific research they were originally built on may no longer be considered as rigorous as we once thought. But that’s okay, we don’t use learning theories as hard rules. They’re just guidelines for instructional design. When designing a learning environment or course, you’re not stuck to using one type of theory, you can pull ideas from all of them if you like.

So to start, let’s look through the cognitivism lens, specifically at information processing theory, and more specifically the tenet of elaborative rehearsal.

What is Information Processing Theory?

If you’re not already familiar with the Welsh language, it’s probably going to take you a considerable amount of time to memorize that phrase. You’d have to memorize each sound individually, in sequence, and then recite it correctly. This brute force technique of memorization by repeating information over and over is called maintenance rehearsing. We’ll cover maintenance rehearsing in a future blog post, so disregard it for now.

On the other hand if you’re able to read this blog post, you probably could memorize the English counterpart of this Welsh phrase with ease, “The sun is high in the sky at noon.” The words are familiar to you so you don’t need to learn how to pronounce them. You only need to remember the word sequence, which is made easier because it follows a regular English sentence structure, which is another concept you’ve already learned. You also already understand the concept the phrase discusses.

As a kid, you were probably told the sun is highest in the sky at noon, or seen it for yourself. All of these previously learned connections makes the English phrase much more meaningful to you as an English speaker, and so it’s easier for you to recall the English phrase when asked to recite it. But why is this the case? How do we explain this? 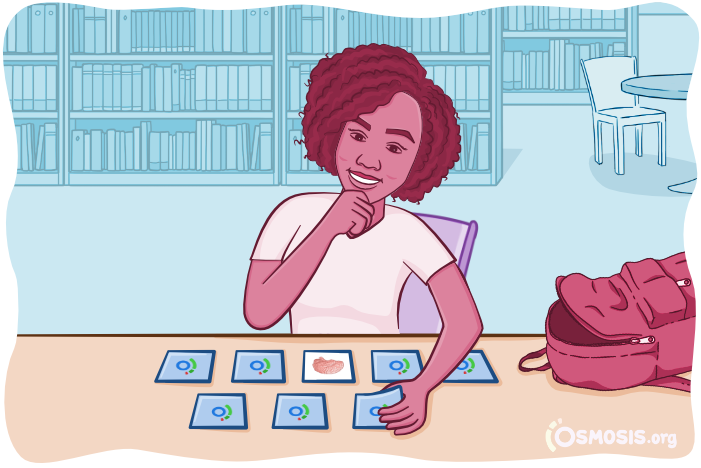 Some information processing theorists believe encoding meaningful information allows the new idea to link with other preexisting ideas. As put by Anderson, “Human knowledge can be represented as a network of nodes, where nodes correspond to concepts and links to associations among these concepts” (Anderson, 1984, cited in Schunk, 2012, p.195). When a concept needs to be recalled, nodes linked to the concept can activate and in turn activate the concept.

You might experience spreading activation regularly. Think back to a time where you bumped into someone you hadn’t seen in awhile. Were you able to remember their name? What about their profession or where you met them last?

There have been a few experiments that have examined these questions. In one experiment, one group of people were shown a picture of a man and told his name was “Farmer.” A second group was shown the same picture of the man but instead were told he was a farmer by occupation (James, 2004). The study found significantly more people remembered the profession of the man than the man’s name. This might be explained by spreading activation. It’s much easier to remember the profession of a person because it activates more nodes in your mind than a name which is just a string of letters.

The term elaborative rehearsal is the application of spreading activation theory to studying strategies, and we can implement elaborative rehearsal into online courses to help students remember more. One way would be to link new concepts to pre-existing knowledge through a short narrative, such as stories about celebrities or global incidents.

Consider this: The late South African President Nelson Mandela was imprisoned for a significant portion of his life. While imprisoned he contracted tuberculosis. A side effect of the tuberculosis infection is you become chronically more susceptible to recurrent lung infections. Nelson Mandela frequently struggled with lung infections during his life until his death in 2013 from pneumonia. 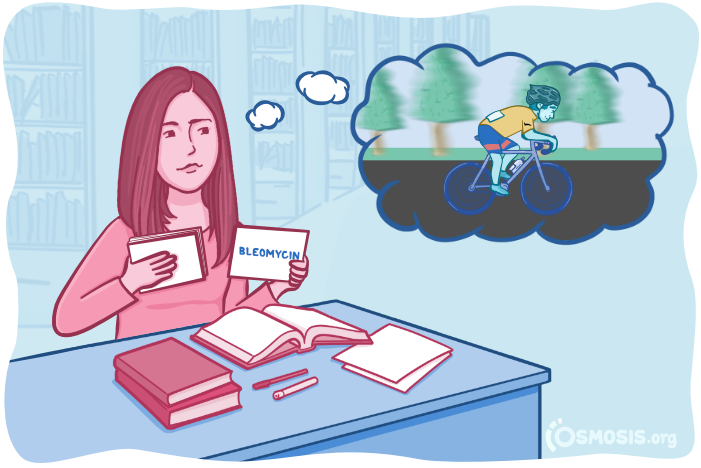 Here’s another example. You may recall Lance Armstrong (a famous former professional cyclist) overcame advanced testicular cancer. When Lance was initially diagnosed, his chance of a full recovery was bleak. His physicians suggested he take the front-line treatment of the time, an anticancer antiobotic drug called bleomycin. Even though Lance’s cancer was quite advanced, he refused to take bleomycin. Lance knew a side effect of bleomycin is scarring of the lungs (pulmonary fibrosis). Scarring of the lungs would make Lance’s lungs less effective at exchanging oxygen and carbon dioxide, effectively ruining Lance’s cycling career. Lance wanted to keep his career, so he refused bleomycin.

From this narrative, we’ve learned bleomycin can cause pulmonary fibrosis, and we’ve associated it with Lance Armstrong. If we wanted to recall side-effects of bleomycin, we might now remember Lance’s choice not to take the drug to avoid damaging his lungs.

Associations are a way instructors could improve student retention. Instructors could easily insert associations into their content, whether it be lectures, video, assigned readings of case studies, online discussions, and so on. Alternatively instructors could link students to websites or services that create association-rich content, or for the exceptionally eager, students themselves could create associations that are meaningful to them by using websites like Celebrity Diagnosis which is a collection of articles discussing the various ailments of famous people and teaches the pathology behind those ailments (you may have seen some similar posts on our Instagram account!)

Associations can be made with visuals as well. Colloquially, these visual memory aids are called memory palaces, and let people visualize in their mind the organization of information. Here at Osmosis, many of our General Pharmacology videos have images that contain several memory palaces, such our pharmacology video Vasodilators - calcium channel blockers. Instructors could provide students with pre-made memory palaces that are related to a particular topic of discussion.

As an aside, another strategy that would be just as effective and perhaps more engaging for students would be for instructors to set aside a few minutes of class time to have students make their own images as an activity (Snowman, 1986, cited in Schunk, 2012, p. 421), although idea of having students creating their own content idea actually falls under a different learning theory: constructivism learning theory, so we’ll explore this idea more thoroughly another time.

Yet another strategy that leverages spreading activation is having instructors create and use mnemonic devices, as well-designed mnemonics allow for easier recall of information, especially lists (Weinstein, 1978, cited in Schunk, 2012, p.421).

For example it’s easier to remember the pharmaceutical drugs that can be administered through an endotracheal tube by using the mnemonic NAVAL: naloxone, atropine, valium, epinephrine, lidocaine.

Note-taking can also be a great way for students to elaborate on ideas and make associations with other content, however not all students create notes effectively (Schunk, 2012, p.421).

In order to optimize associations between concepts, students cannot simply copy information from lecture slides. Instead students need to create notes that focus around learning objectives and apply the concept to new ideas or situations (Schunk, 2012, p.421).

To facilitate this, instructors could print out detailed summaries of the content covered in the class lecture. Parts of these summaries could have crucial information removed and replaced with an area for students to write in the information themselves. These worksheets could also ask students questions on how to apply the content to a new situation. The students could then work together in class with instructors to collectively answer these questions, and then make notes from those discussions.

Having students visually draw a map of ideas and concepts is another great way for students to transfer information from their working memory to long-term memory.

A lung embolism, a stroke, and a heart attack are caused by the same underlying issue: not enough blood is flowing to the lung, brain, or heart. Cancer is caused by cells losing the ability to age and they continue to multiply without regulation. Almost all vasculitis diseases (and there are many different types of vasculitis) are caused by the body’s immune system accidentally mistaking part of the body as a foreign invader and attacking it. Once injury to an organ occurs, it’s often easy to predict the set of events that will occur afterwards.

For example, a pulmonary embolism would cause some of the lung tissue to become injured and eventually die. As the patient undergoes medical treatment, blood flow is eventually restored to these injured or dead cells. These injured cells become scarred and as we might remember earlier from the drug bleomycin, scarred lung tissue reduces the effectiveness of oxygen and carbon dioxide exchange in the lungs, diminishing a patient’s ability to breathe efficiently.

If an instructor was teaching a pathophysiology course, they could allow students to work together to draw these visual maps of associated concepts, facilitating them to make these associations between ideas. 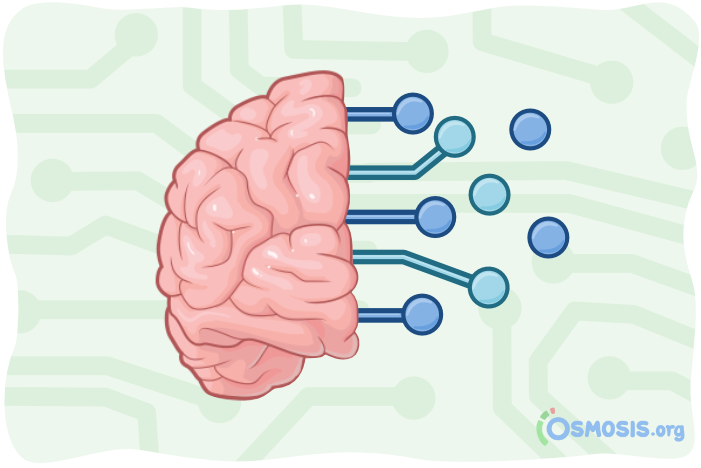 All right, as a quick recap...

All of this to say, we know there is reasonable evidence in learning theory that suggests the best way to retain newly learned information is to create many associations between that new information and pre-existing concepts. Instructors teaching a course can improve student retention by using instructional tools like short-narratives, visual images, mnemonics, visual concept maps, or creating worksheets that facilitate students to take strong notes.

In a future blog post, we’ll look at how another tenant of information processing theory called maintenance rehearsal can be used to memorize and retain information.

Kyle is a Senior Content Manager and Instructional Designer at Osmosis. He wears many hats, such as managing volunteers and contractors, designing future projects, producing videos, leading internationalization efforts, and designing Osmosis’s textbooks. A jack-of-all-trades. Before Osmosis, he worked as a project coordinator for Khan Academy Medicine, where he managed the creation of videos, questions, and text-based articles for MCAT and NCLEX-RN students.

Kyle also worked in the pediatric intensive care unit as a nurse at the Children’s Hospital of Eastern Ontario, in Ottawa, Canada. He received his Bachelors of Science in Nursing from the University of Ottawa and holds a Masters of Education in Distance Education from Athabasca University.

With his free time, Kyle loves to go on adventures, hang out with friends, play board games, bake bread, and play musical instruments.