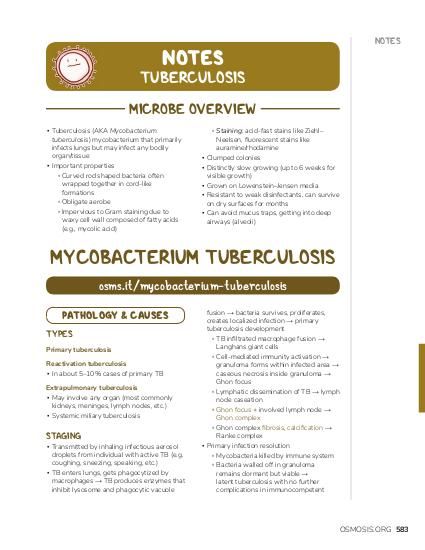 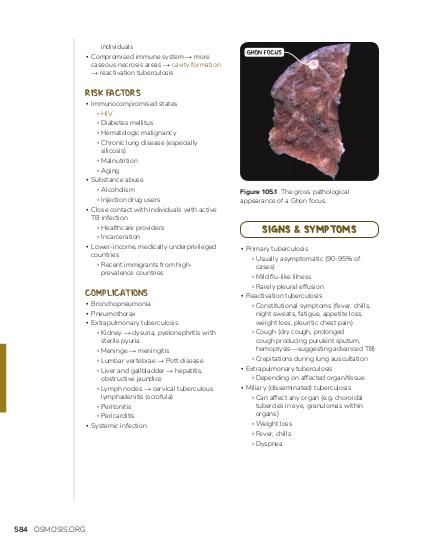 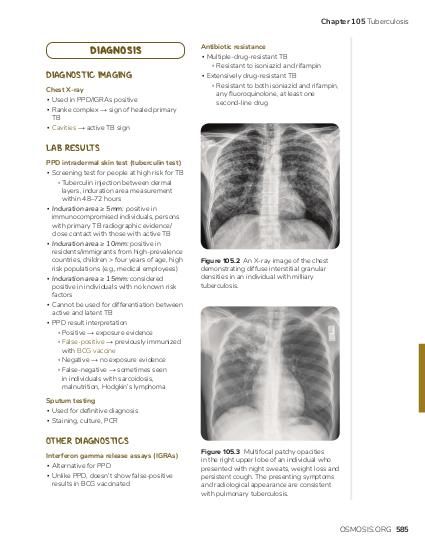 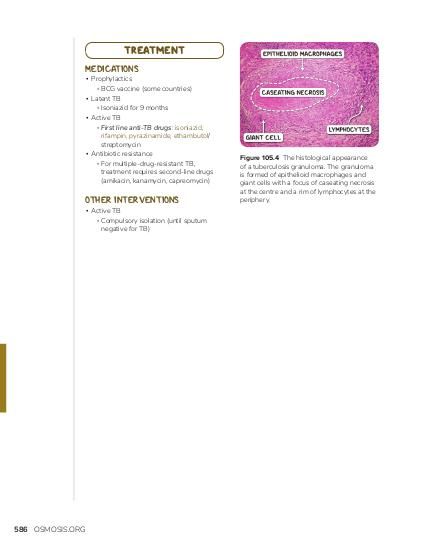 A 55-year-old female presents to the emergency department with worsening cough and hemoptysis. The patient has had a cough for months, but over the past week, it has become more severe and produces bright-red blood. She is originally from Bolivia, where she worked as a nurse, and she immigrated to Ohio several months ago. Past medical history is unremarkable, and she does not smoke or use illicit drugs.  Temperature is 38.3°C (101°F), pulse is 110/min, respirations are 22/min, blood pressure is 90/64 mmHg, and O2 saturation is 92% on room air. Physical exam demonstrates an ill-appearing, cachectic woman. Cardiopulmonary exam is notable for diffuse rales throughout the lung fields, and mental status exam demonstrates a confused woman who is unable to recall the year or month. Abdominal exam is remarkable for hepatosplenomegaly. Laboratory and radiographic findings are demonstrated below.


Image reproduced from Radiopaedia
Which of the following is the most likely diagnosis?
Memory Anchors and Partner Content 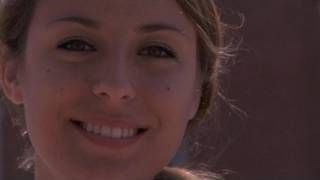 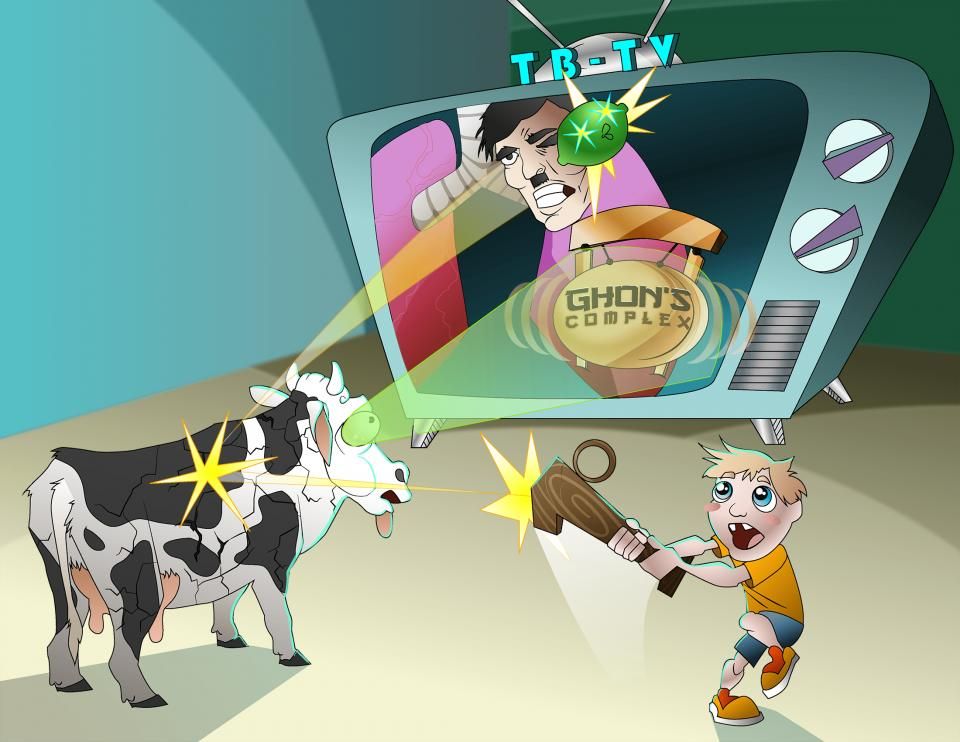 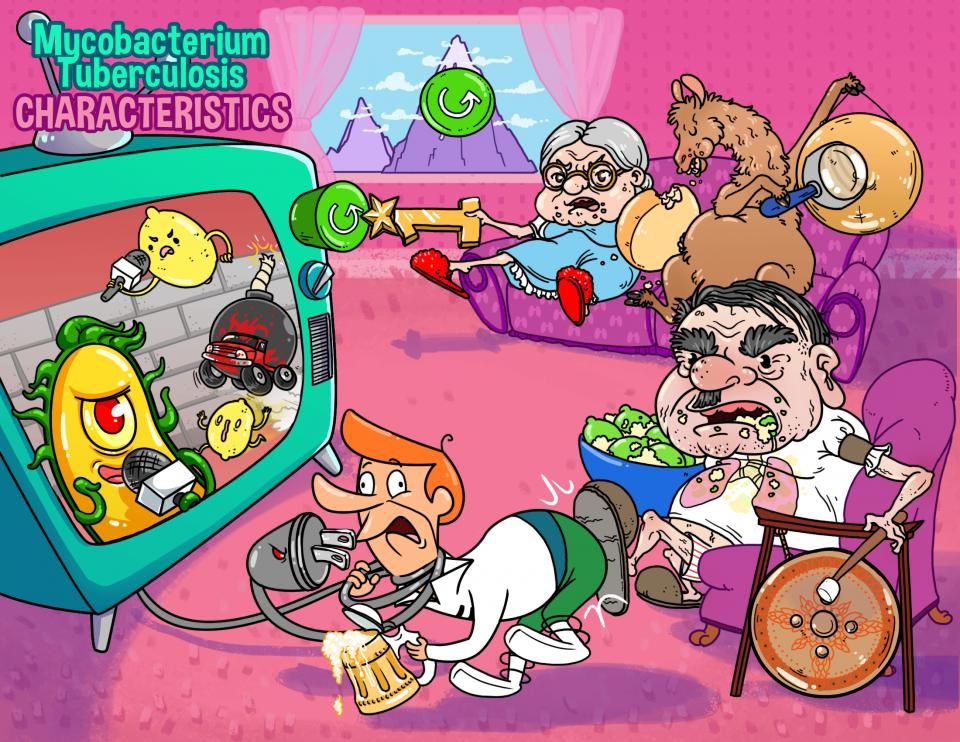 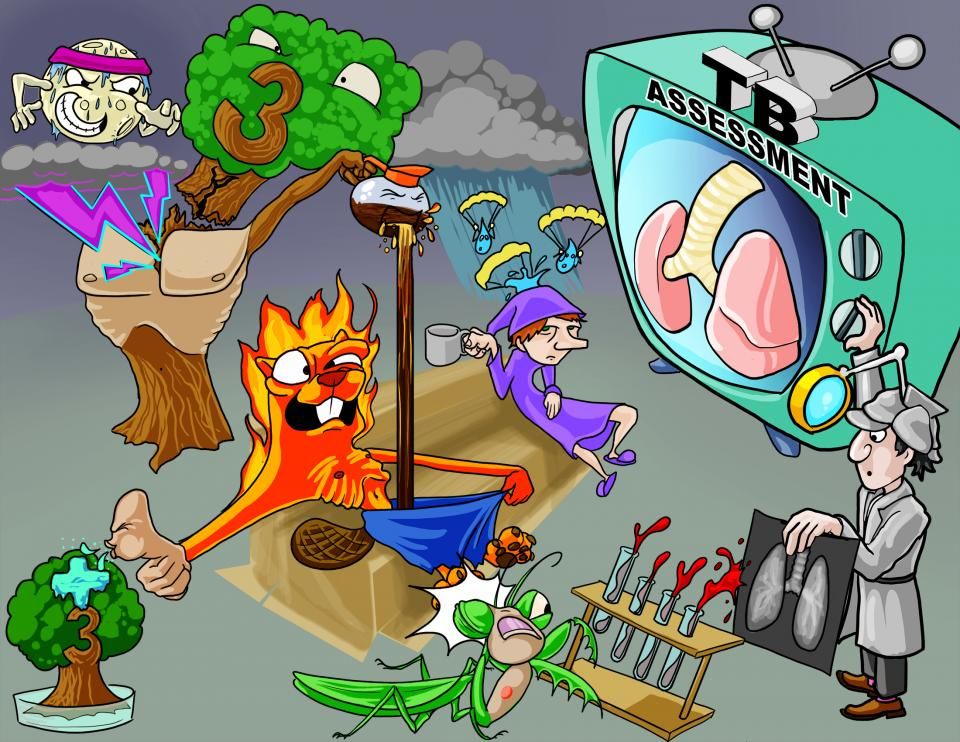 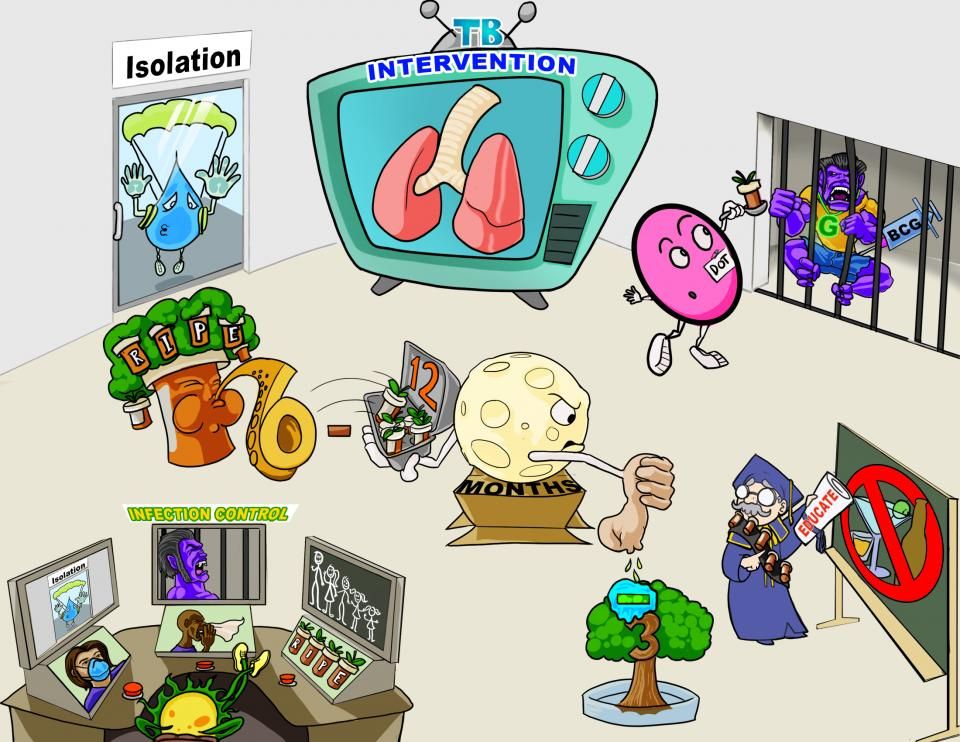 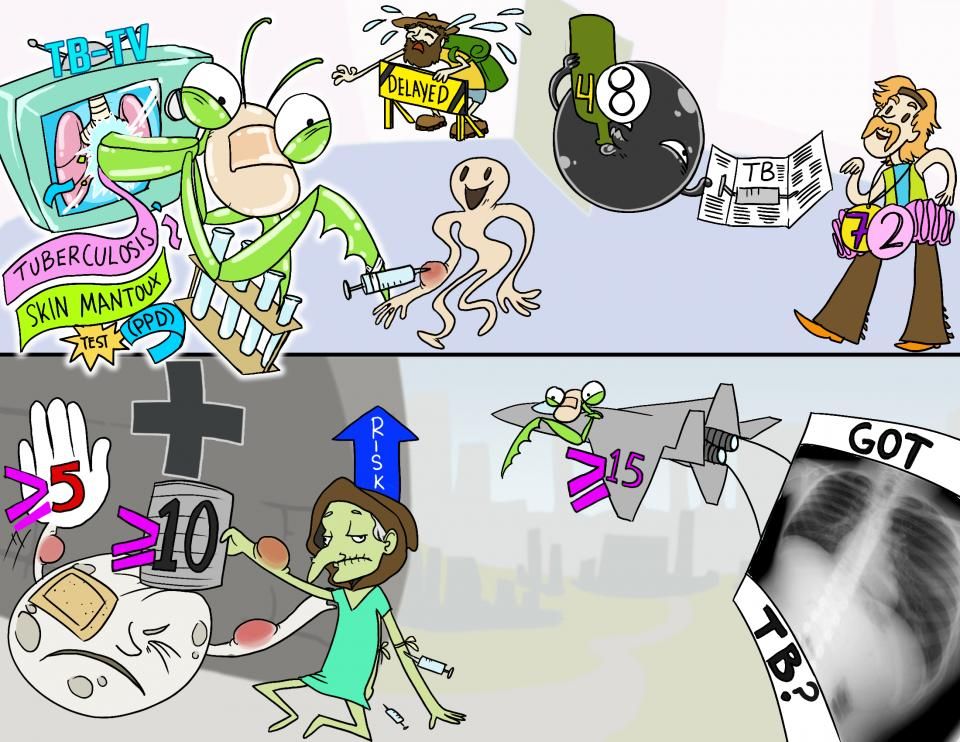 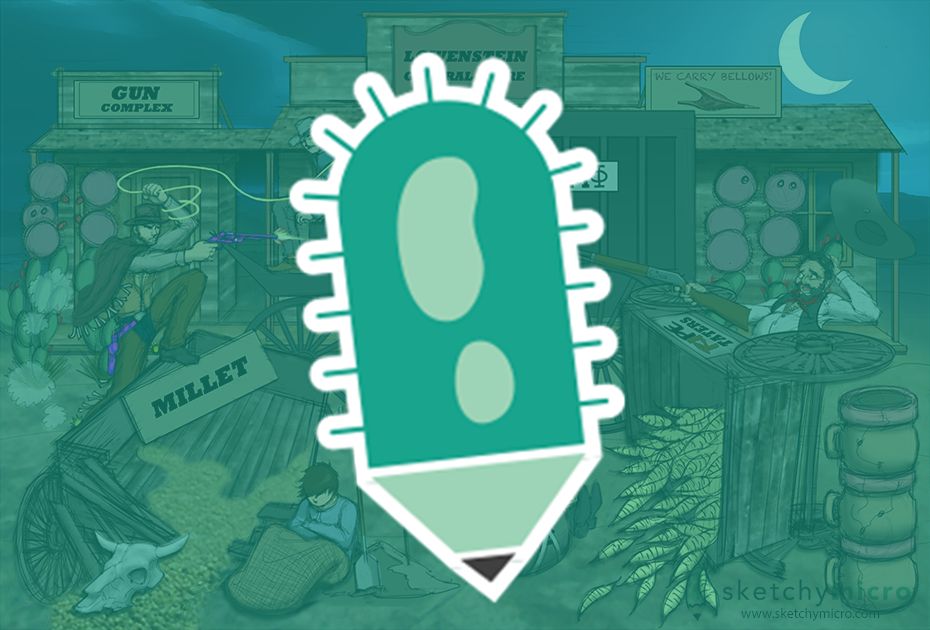 It’s estimated that about two billion people worldwide are infected with mycobacterium tuberculosis, often just shortened to tuberculosis or simply ‘TB’. Two billion is a ton of people, but even though they’re infected, that doesn’t mean that all those people have symptoms, the vast majority, about 90-95%,  aren’t even aware that they’re infected. And this is because usually the immune system can contain it such that it isn’t able to multiply, and often remains latent, or dormant, as opposed to active, which usually causes symptoms and can be spread to others. If the host’s immune system becomes debilitated at some point down the road, like with AIDS or some other illness, or as a person grows older, it can be allowed to reactivate, or basically wake up and become very serious, especially if it spreads throughout the body.

Mycobacteria are an interesting bunch, they’re slender, rod-shaped, and need oxygen to survive, in other words, they’re “strict aerobes”. They’ve got an unusually waxy cell wall, which is mainly a result of the production of mycolic acid. Because of this waxy cell wall, they’re “acid-fast”, meaning that they can hold on to a dye in spite of being exposed to alcohol, leaving it bright red colored when a Ziehl–Neelsen stain is used.  The wall also makes them incredibly hardy, and allows them to resist weak disinfectants and survive on dry surfaces for months at a time.

Now Mycobacterium tuberculosis is usually transmitted via inhalation, which is how they gain entry into the lungs. Now, we breathe in all sorts of virus and bacteria all the time, but we’ve got defenses that take care of most of them. For one, air that we breathe in is turbulent in the upper airways, and drives most bacteria against mucus which is then cleared pretty quickly. Ultimately, though, TB can avoid the mucus traps and make its way to the deep airways and alveoli where we have macrophages that eat up foreign cells, digest, and destroy them. With TB, they recognize foreign proteins on their cell surface, and phagocytize them, or essentially package them into a space called a phagosome. With most cases, the macrophage then fuses the phagosome with a lysosome, which has hydrolytic enzymes that can pretty much break down any biochemical molecule. TB’s tricky, though, and once inside the macrophage, they produce a protein that inhibits this fusion, which allows the mycobacterium to survive. It doesn’t just survive, though, it proliferates, and creates a localized infection.

At this point somebody has developed primary tuberculosis, which means that they have signs of infection soon after being exposed to TB. Even though it sounds bad, most people at this stage are actually asymptomatic or maybe have a mild flu-like illness. About 3 weeks after initial infection, cell-mediated immunity kicks in, and immune cells surround the site of TB infection, creating a granuloma, essentially an attempt to wall off the bacteria and prevent it from spreading. The tissue inside the middle dies as a result, a process referred to as caseous necrosis, which means “cheese-like” necrosis, since the dead tissue is soft, white, and looks kind of like cheese. This area is known as a “Ghon focus”. TB also gets to hilar lymph nodes, either carried over by immune cells through the lymph or by direct extension of the Ghon focus infection and causes caseation there as well, and together, this caseating tissue and associated lymph node make up the characteristic “Ghon complex”. Ghon complexes are usually subpleural and occur in the lower lobes of the lungs. The tissue that’s encapsulated by the granuloma undergoes fibrosis, and often calcification, producing scar tissue that can be seen on X-ray; this calcified Ghon complex is called a “Ranke complex”. In some cases, although a scar is leftover, the mycobacteria is killed off by the immune system, and that’s the end of that.

In other cases, even though they’re walled off, they remain viable, and are therefore still alive, but they’re just dormant. If and when a person’s immune system becomes compromised, like with AIDS or with aging, the Ghon focus can become reactivated, and the infection can spread to either one or both upper lobes of the lungs. It’s thought that this is because oxygenation is greatest in these areas, and TB being an aerobe, prefers areas of greater oxygenation. Since they were previously exposed, the immune system’s memory T cells quickly release cytokines to try and control the new outbreak, which forms more areas of caseous necrosis. This time, though, it tends to cavitate, or form cavities, which can allow the bacteria to disseminate, or spread through airways and lymphatic channels to other parts of the lungs, which can cause bronchopneumonia; but it can also spread via the vascular system and infect almost every other tissues in the body, called systemic miliary TB.

When TB spreads to other tissues, it causes complications related to the organ affected. Kidneys are commonly affected, resulting in sterile pyuria, or high levels of white blood cells in the urine. It might also spread to the meninges of the brain, causing meningitis; the lumbar vertebrae, causing Pott disease; the adrenal glands, causing Addison’s disease; the liver, causing hepatitis; and the cervical lymph nodes, causing lymphadenitis in the neck, also known as scrofula.

Summary
Mycobacterium tuberculosis is an obligate aerobic bacterial species in the family Mycobacteriaceae and the causative agent of most cases of tuberculosis. M. tuberculosis can appear gram-negative and gram-positive in clinical settings. The Ziehl-Neelsen stain, or acid-fast stain, is used instead. Its unusual cell wall, rich in lipids (e.g., mycolic acid), is likely responsible for this resistance and is a key virulence factor. M. tuberculosis can only be spread through air droplets.  The physiology of M. tuberculosis is highly aerobic and requires high levels of oxygen. Primarily a pathogen of the mammalian respiratory system, it infects the lungs where M. tuberculosis is taken up by alveolar macrophages and the bacteria multiply unchecked within the macrophage. Protective granulomas are formed due to the production of cytokines. The most frequently used diagnostic methods for tuberculosis are the tuberculin skin test, acid-fast stain, and chest radiographs.
Feedback