Assessments
Muscles of the forearm

Muscles of the Forearm 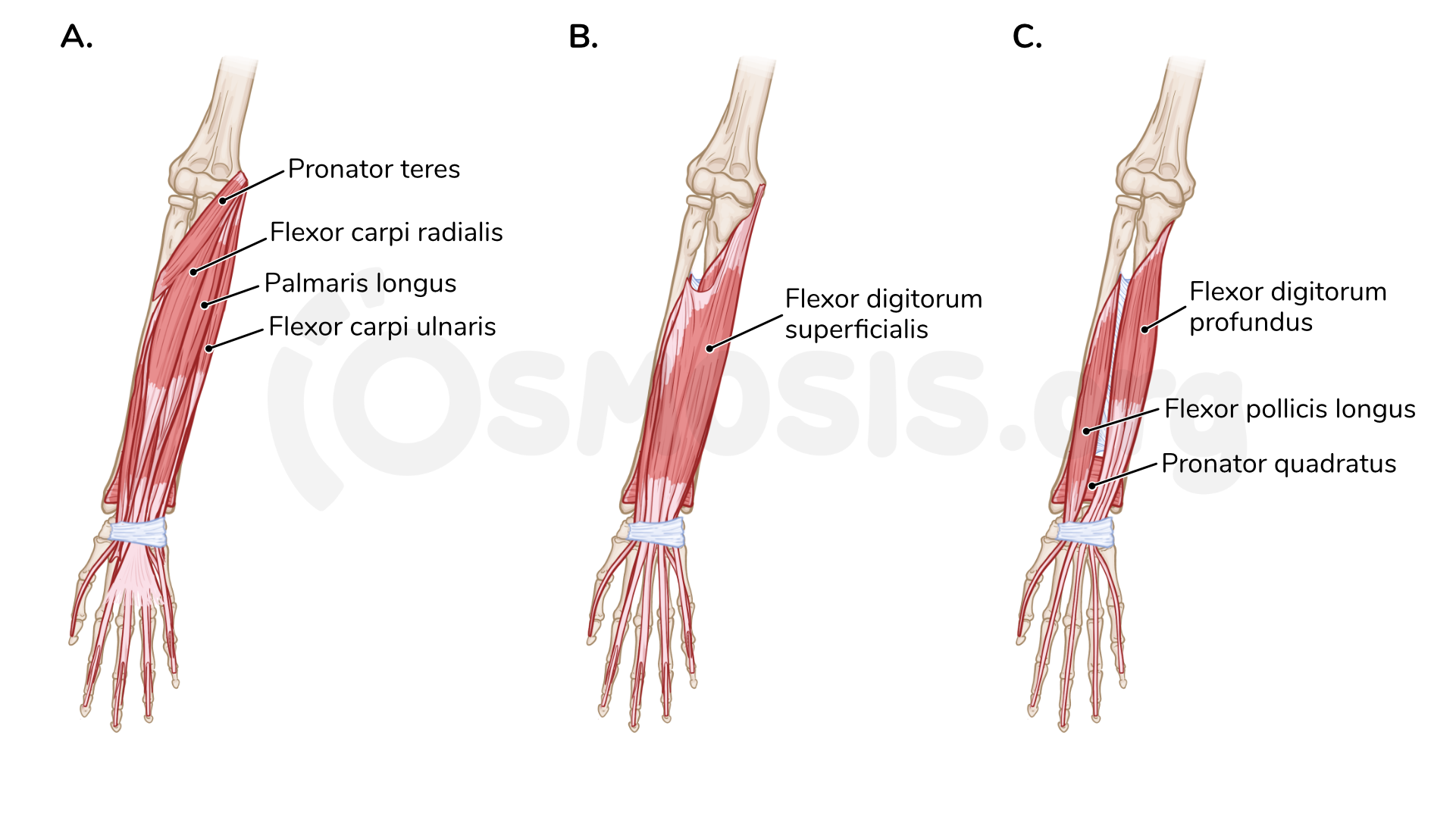 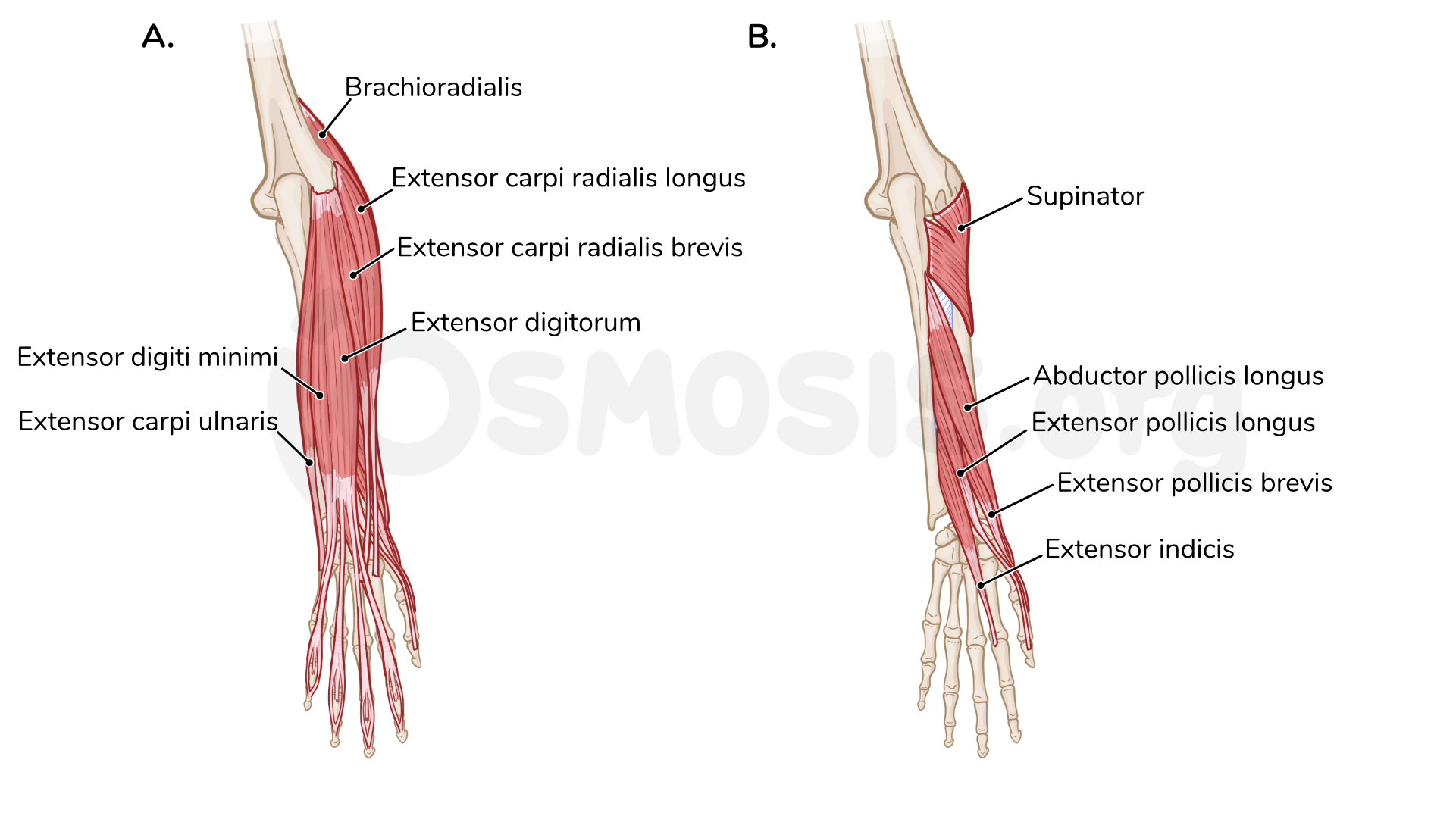 Figure 2. A Superficial posterior and B deep posterior forearm muscles. 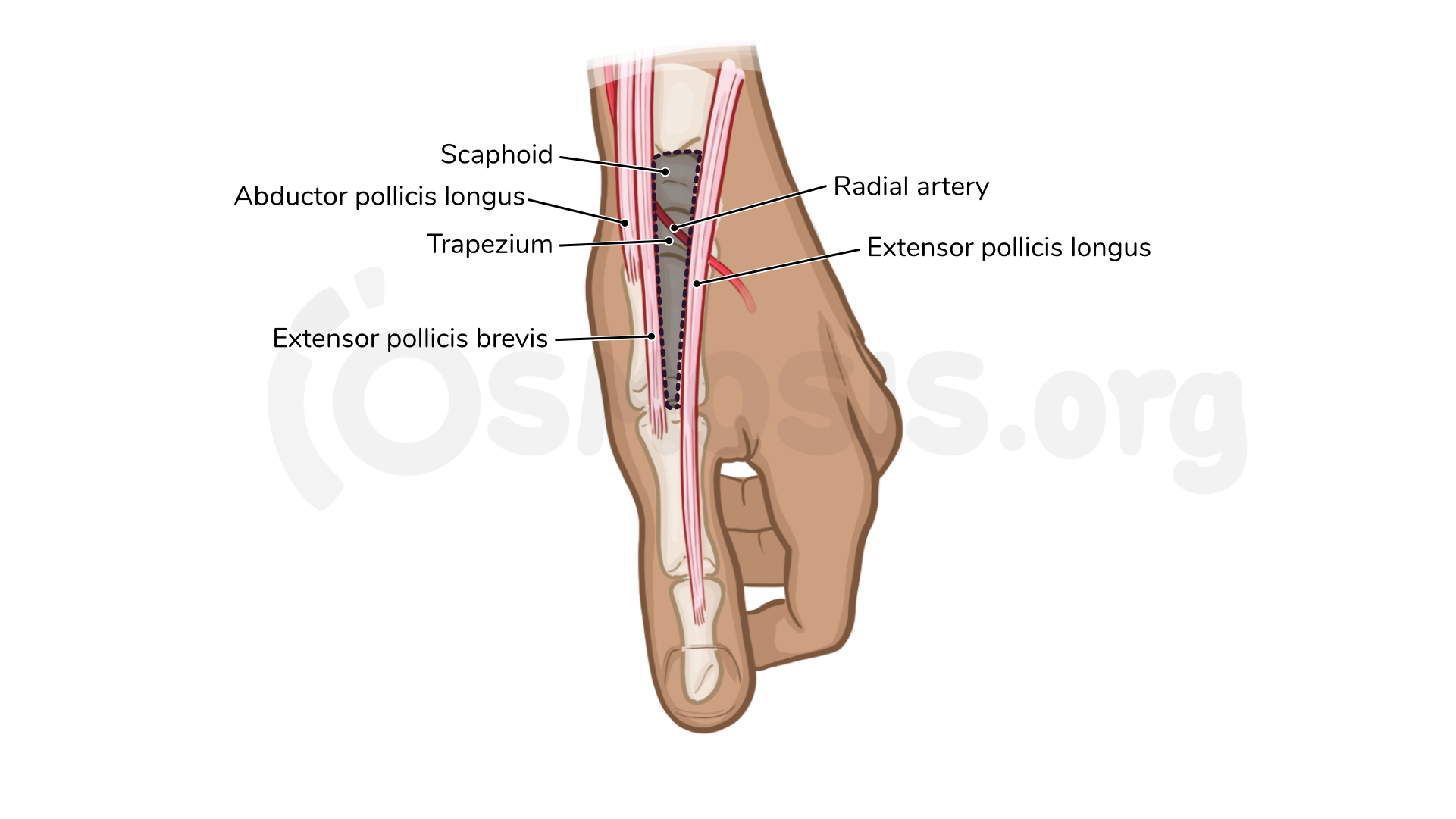 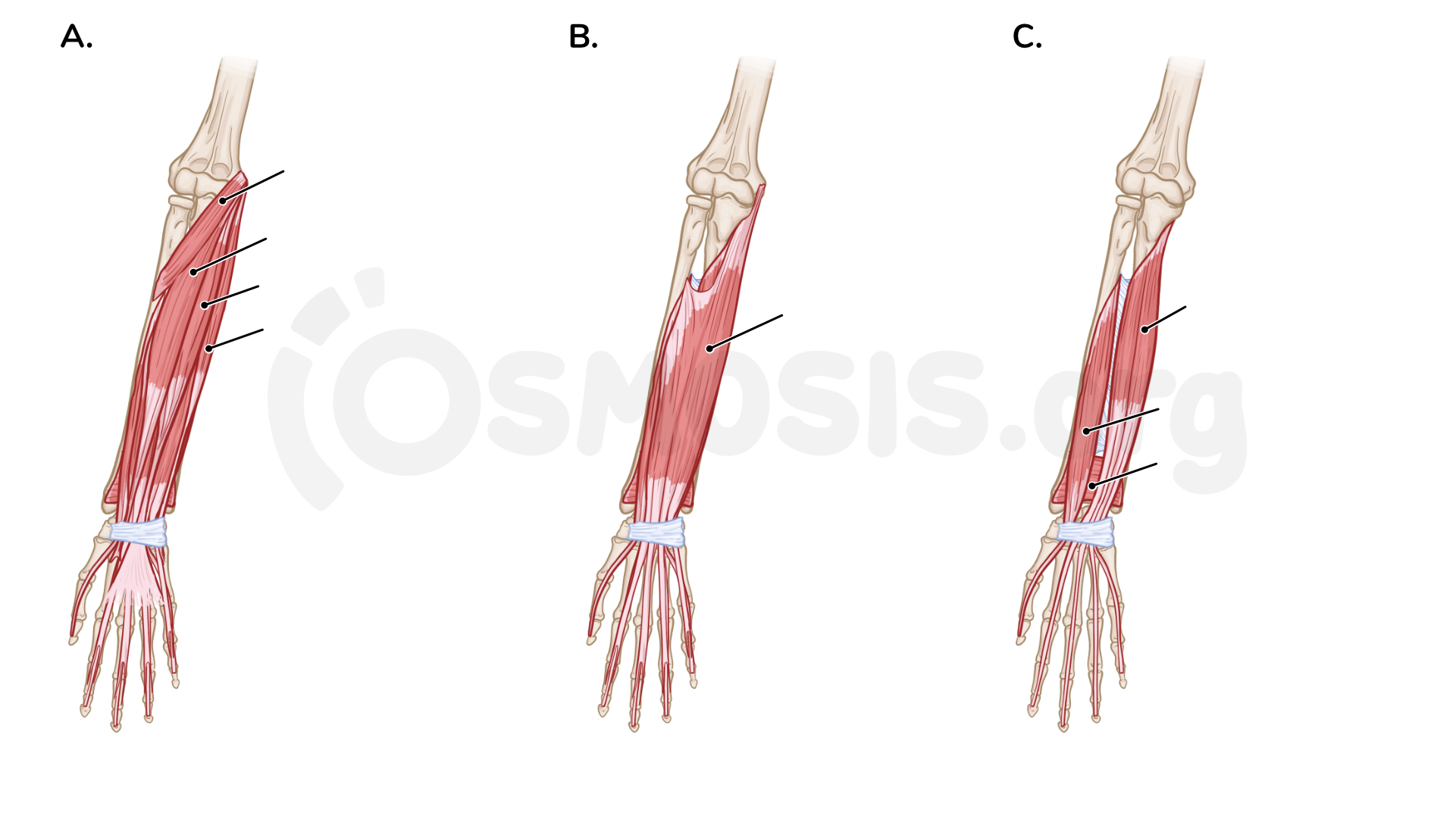 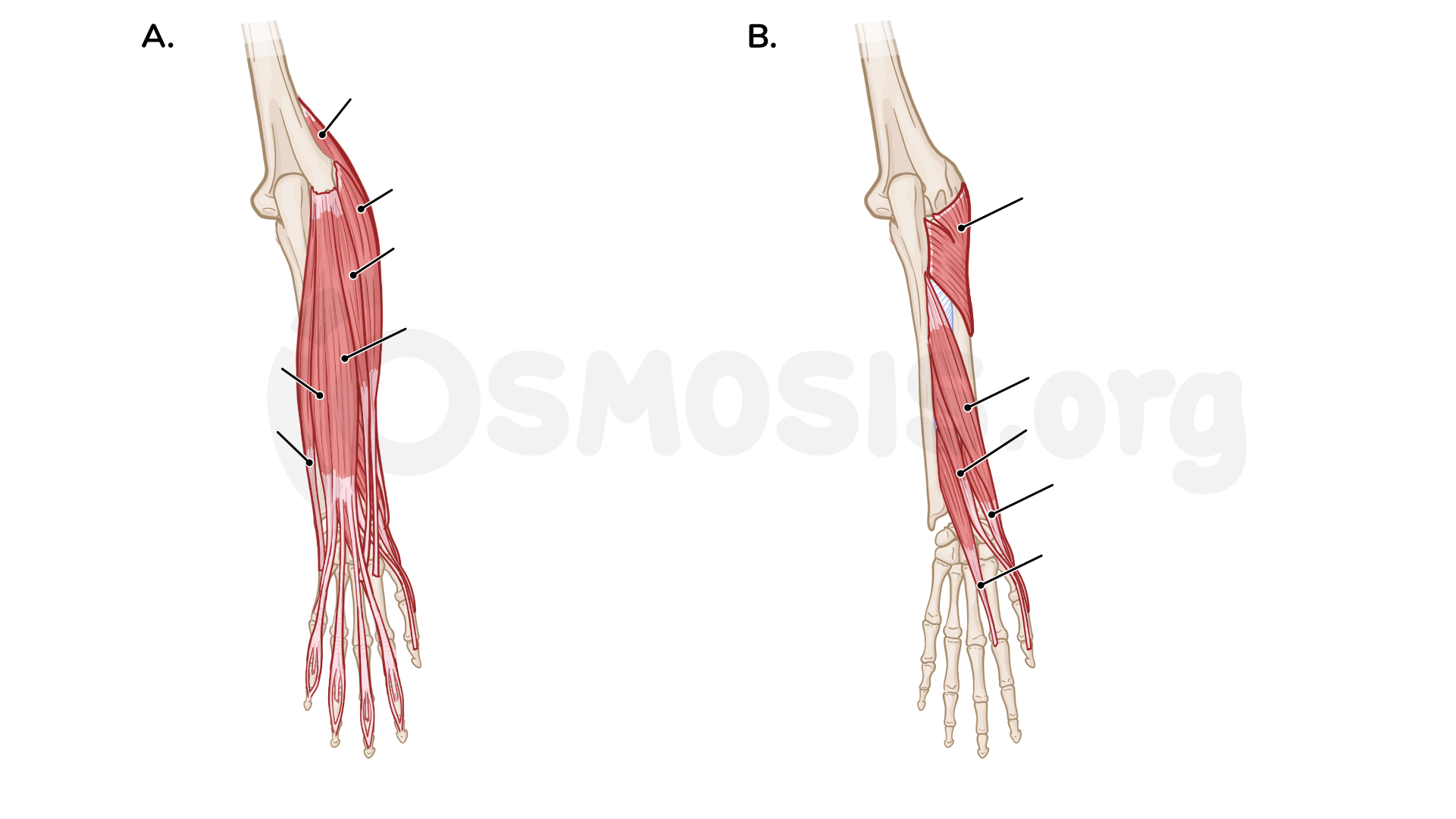 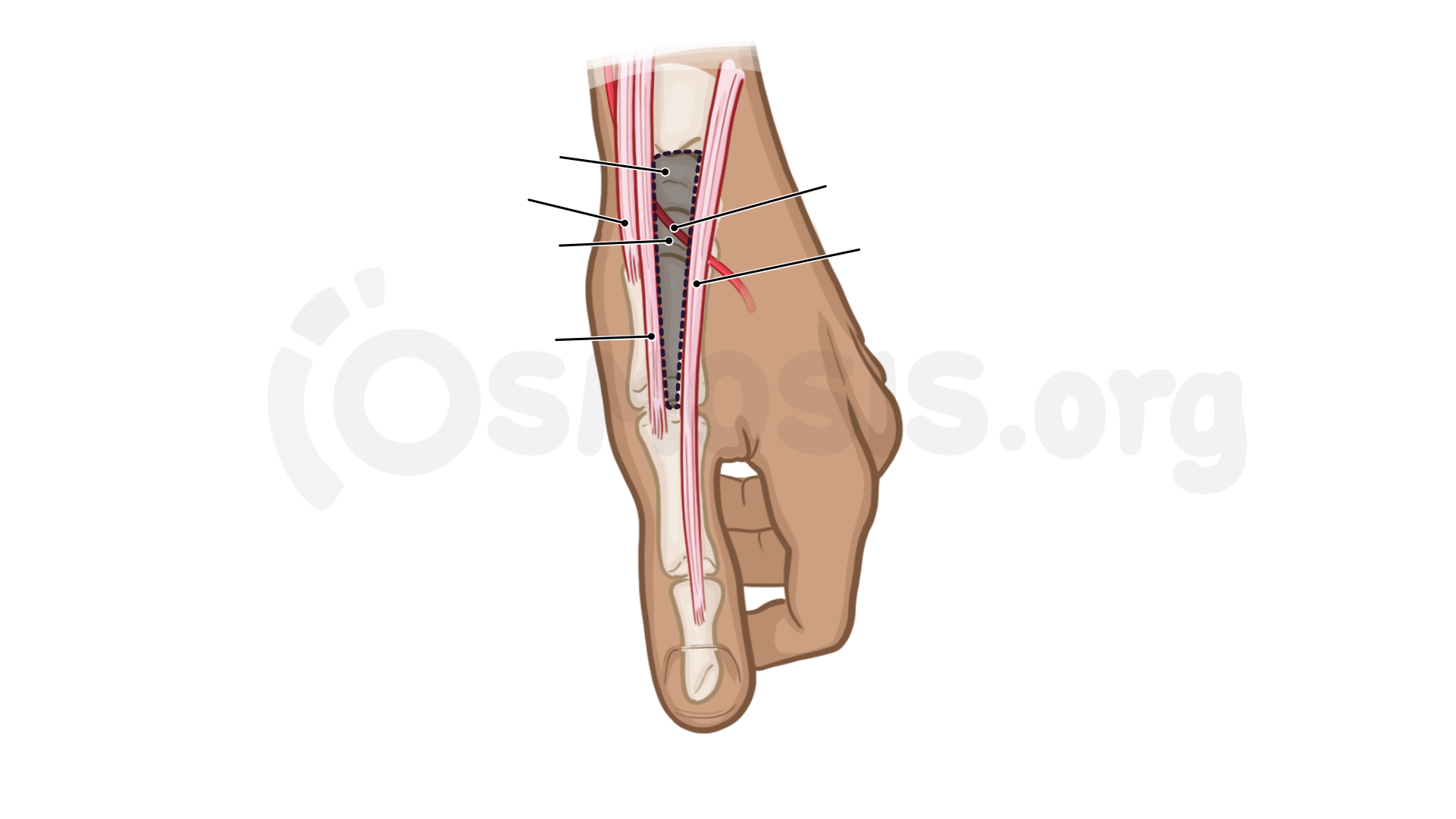 A patient comes to the emergency department with a fracture at the mid-shaft of their humerus after falling off of their mountain bike. Physical examination is consistent with a radial nerve injury due to the fracture. What action would most likely be weak in this patient?

Anatomically speaking, the forearm is the part of the upper limb between the elbow and the wrist joints.

It contains two bones: the ulna and the radius, which provide support to local muscles supplied by an intricate network of nerves and vessels.

On the anterior part of the elbow, there’s a triangular fat-filled pit, called the cubital fossa, which is where the majority of important nerves and vessels to the forearm and hand can be found.

Okay, before we start, it is important to know that, even though some of the muscles of the forearm attach proximally to the humerus, they still belong to the forearm.

The forearm is divided into two compartments, which are separated by the radius and ulna and the interosseous membrane running between them.

We have the anterior compartment, which contains flexors and pronators.

Next, is the posterior compartment, housing the extensors and supinators of the forearm.

Generally, muscles in the same compartment are innervated by the same nerve.

Muscles of the posterior compartment, on the other hand, are innervated by the radial nerve.

Now, the muscles of the anterior compartment are divided into three groups, or layers: superficial, intermediate, and deep.

In the superficial layer there are four muscles which all arise from a common tendon attached to the medial epicondyle of the humerus, so this attachment site is called the common flexor origin.

Now, let's look at these muscles one by one.

On the most medial side lies the flexor carpi ulnaris.

As these two move distally to the wrist, they fuse into one tendon that crosses the wrist to distally attach to three bones: the pisiform, the hook of hamate, and 5th metacarpal bone.

This muscle mainly flexes and adducts the hand at the wrist joint.

This muscle proximally attaches to the medial epicondyle of the humerus, and extends distally to form a tendon that attaches to the distal half of the flexor retinaculum and the apex of the palmar aponeurosis.

The palmaris longus muscle is innervated by the median nerve.

When it contracts, it flexes the hand at the wrist.

A fun fact about the palmaris longus: it is absent in about 14% of people!

But luckily, its absence doesn’t come with any functional deficits.

Lateral to the palmaris longus, there’s the flexor carpi radialis muscle, which also proximally attaches to the medial epicondyle of the humerus.

It extends distally and laterally to the middle of the forearm, forming a tendon that attaches at the base of the second metacarpal bone.

The flexor carpi radialis is innervated by the median nerve.

When it contracts, it flexes and abducts the hand at the wrist joint.

Finally, there’s the pronator teres, which is the most lateral muscle of the superficial muscles in the anterior compartment.

It also has a humeral and an ulnar head.

As the muscle extends distally, its two heads fuse into one tendon that attaches to the midshaft of the radius on its lateral aspect.

The pronator teres is innervated by the median nerve, and its contraction pronates and flexes the forearm at the elbow.

OK, what if we take a one-minute pause to flex your wrists.

At the same time, try to remember the muscles that attach to the common flexor origin as well as their distal attachments?

Now, let’s have a look at the intermediate layer of the anterior compartment of the forearm.

It’s a one-muscle compartment, containing only the flexor digitorum superficialis.

Moving distally, the two heads of the flexor digitorum superficialis fuse together in the middle of the forearm, and that eventually splits into four separate tendons at the level of the wrist.

All of these tendons pass deep to the flexor retinaculum in the carpal tunnel, eventually attaching to the shafts of middle phalanges of the medial four digits.

The flexor digitorum superficialis is innervated by the median nerve, and its actions depend on how hard it’s contracting.

When it contracts moderately, it flexes the middle phalanges at proximal interphalangeal joints of the medial four digits.

With a stronger contraction, this muscle also flexes the proximal phalanges at metacarpophalangeal joints.

Finally, let's look at the three muscles of the deep layer of the anterior compartment of the forearm: the flexor digitorum profundus, the flexor pollicis longus, and the pronator quadratus.

The flexor digitorum profundus has two proximal parts, a medial and a lateral part, and both of them attach to the proximal three-quarters of the anterior aspect of the ulna and the interosseous membrane.

All the tendons pass posterior to the flexor digitorum superficialis and flexor retinaculum.

The medial part functions to flex the distal phalanges of digit 4 and 5 at the distal interphalangeal joints, while the lateral part does the same thing for the 2nd and 3rd digits.

To easily remember this, think of how the flexor carpi ulnaris and the medial part of the flexor digitorum profundus are both medial and are closer to the ‘ulnar’ side of the forearm.

This will remind you that they are innervated by the ulnar nerve as it travels more medially in the forearm as well!

Next up, there’s the flexor pollicis longus, which attaches proximally to the anterior surface of the radius and interosseous membrane.

As the flexor pollicis longus extends distally, it transforms into a flat tendon that passes under the flexor retinaculum of the hand through the carpal tunnel to insert to the base of distal phalanx of the thumb.

The flexor pollicis longus is innervated by the anterior interosseous nerve, which is a branch of the median nerve, and it causes flexion of the thumb.

Finally, there’s the pronator quadratus muscle, which is a quadrangular muscle found deep to the other muscles in the anterior compartment.

The pronator quadratus is innervated by the anterior interosseous branch of the median nerve.

When it contracts, it is the primary pronator of the forearm while also helping to hold the radius and ulna together.

Now, it is also important to know that the majority of these flexor tendons from the anterior compartment are held in place to prevent bowing by both the palmar carpal ligament and the distal and deeper flexor retinaculum, which is also known as the transverse carpal ligament. Both of these can be found on the anterior surface of the hand and wrist.

Now, it’s okay to take another pause and see if you can remember the only muscle of the intermediate layer and the three muscles in the deep layer of the anterior compartment.

So, let’s now move to the posterior compartment of the forearm.

The muscles of the posterior compartment are all innervated by the radial nerve, and they’re mainly extensors of the wrist and digits.

The extensor tendons also have synovial tendon sheaths to reduce friction during movement.

The posterior compartment muscles are divided into a superficial and deep layer.