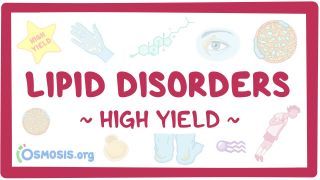 This can happen when they go back to the liver, or in peripheral tissues that need cholesterol to function.

Depending on the type and severity, hyperlipidemia can result in various clinical manifestations, or it can be completely asymptomatic.

Beginning from the outside, skin manifestations include xanthomas, which are deposits of fat under the skin and in the tendons.

These occur when extremely high levels of lipoproteins or triglycerides in the blood leak out of the blood vessels.

When these deposits occur around the eyelid, it gets a special name; xanthelasma.

Speaking of the eyes, lipids can deposit around the cornea, creating a brown ring of fat called a corneal arcus. Lipid deposition in the liver can cause fatty liver disease, also called hepatic steatosis.

Okay, so let’s look at the primary, or Familial hyperlipidemias, which are inherited in either an autosomal dominant or recessive manner.

Although there are many, the most high yield ones often tested on exams are types 1 through 4.

Type 1 hyperlipidemia is an autosomal recessive disorder characterized by elevation of chylomicrons in the blood, so it’s also referred to as hyperchylomicronemia.

This occurs secondary to a deficiency in lipoprotein lipase.

This enzyme also normally requires a cofactor called apolipoprotein C2, so deficiency of this cofactor can also lead to type 1 hyperlipidemia.

This condition is characterized by the rapid development of many xanthomas on the back and buttocks that can be itchy.

Due to the rapid nature of their development, they’re referred to as eruptive xanthomas.

In addition, the high concentration of triglycerides in chylomicrons can often lead to the development of acute pancreatitis.

This occurs because when the pancreatic cells encounter triglycerides, they release the enzyme lipase, which breaks them down into free fatty acids.

Too many free fatty acids can be toxic to the pancreatic cells, leading to acute pancreatitis.

Another unique feature of type 1 hyperlipidemia is that atherosclerotic cardiovascular disease is not a complication.

Finally, people with this condition can develop hepatosplenomegaly.

An important clue that might appear on your exams is that when fasting serum is chilled, the chylomicrons will form a creamy layer at the top of the test tube.

It’s characterized by the elevation of LDL cholesterol if it’s type “A,” and both LDL and VLDL if it’s type B.

Okay, so normally, the liver can decrease cholesterol levels by recycling LDL in the blood.

LDL attaches to its own LDL receptor on the surface of liver cells, and with the help of a protein called apolipoprotein B-100, or ApoB-100, it enters the liver cells.

So in this condition, either the LDL receptor or ApoB-100 are absent or defective, causing LDL levels go up.

Because the liver cells aren’t getting any LDL back, they begin to “think” that cholesterol is actually low in the blood, and so they start making even more cholesterol, and sending them out in VLDL.

As you can imagine, this would worsen the problem.

Unlike type 1, type 2 hyperlipidemia will increase the risk of developing atherosclerosis, and this is high yield.

In fact, individuals may present with coronary artery disease as early as 20 years old!