Assessments
Muscles of the hand

A patient is experiencing weakness in the right hand after a sports injury. Testing reveals that the ulnar nerve was injured. What muscles in the hand will still most likely function normally in this patient? 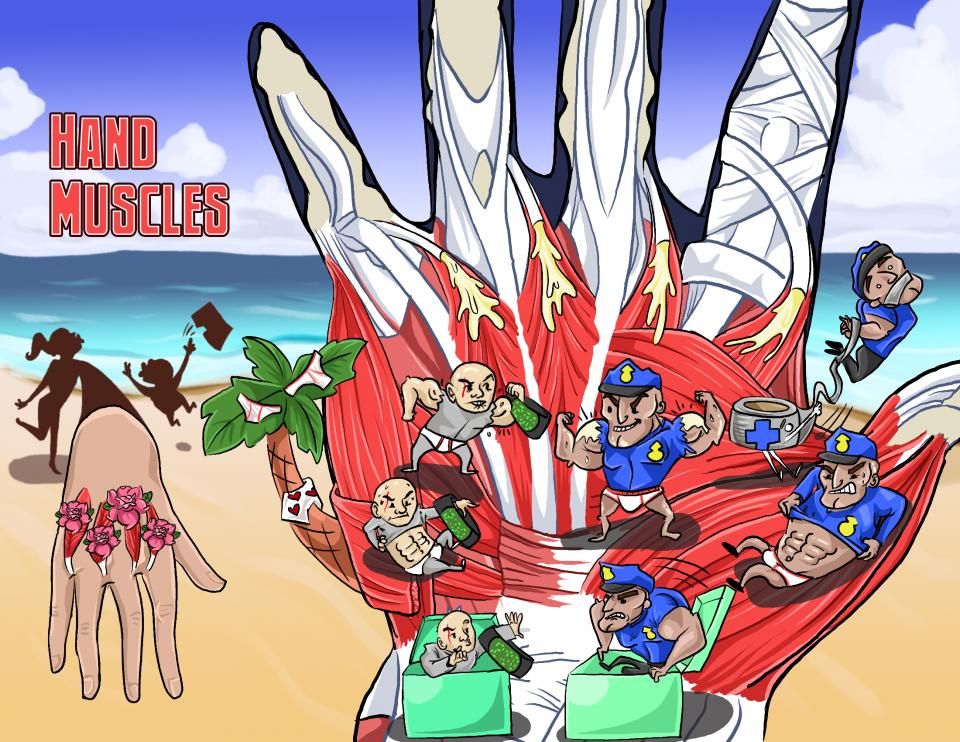 The hands are the most distal part of our upper limbs, and they’re quite marvelous!

They’re strong enough to lift heavy boxes, and at the same time delicate and precise enough to thread a needle, or type on a keyboard.

The diverse range of movements our hands are capable of is made possible by a variety of muscles and their arrangement within the hand.

There are also several interosseous compartments between the metacarpals.

The palmar fascia , which is the continuation of the antebrachial fascia in the forearm, forms the palmar aponeurosis centrally.

The palmar aponeurosis is a strong, thickened portion of the palmar fascia covering the central compartment and overlies the flexor tendons.

Proximally, the palmar aponeurosis blends with the tendon of palmaris longus and the flexor retinaculum, which if you remember is a transverse ligament spanning over the carpal bones creating the carpal tunnel.

Distally, the palmar aponeurosis divides into four longitudinal bands that radiate distally to attach to the bases of the proximal phalanges, where they become continuous with the fibrous digital sheaths which enclose flexor tendons going to the digits.

Within the hand, the medial border of the palmar aponeurosis becomes continuous with the thin hypothenar fascia, which covers the muscles of the hypothenar compartment.

The palmar aponeurosis extends laterally where it continues with the thin thenar fascia, which covers the muscles of the thenar compartment.

Now, deep to the flexor tendons there are two potential spaces; the thenar space, and the midpalmar space.

These spaces are important as they are potential closed off spaces that can become affected during a pathologic process like an infection.

Before we take a look at the muscles of the hand, let's take a quick look at some of the movements of the hand, particularly the thumb.

The thenar muscles are mainly responsible for the various movements of our thumb.

Now, let’s take a look at each of the muscle compartments of the hand, starting with the thenar compartment.

The thenar compartment is located in the lateral part of the palm, and forms the thenar eminence of the hand.

It contains three muscles which mainly act on the thumb.

The abductor pollicis brevis makes up the lateral part of the compartment.

This muscle attaches proximally to the flexor retinaculum and the tubercles of the scaphoid and the trapezium, and then extends distally to attach to the lateral base of the proximal phalanx of the thumb. The abductor pollicis brevis is innervated by the recurrent branch of the median nerve, and when it contracts, it abducts the thumb and also assists in opposition.

The flexor pollicis brevis has a superficial and a deep head.

Both heads attach proximally to the flexor retinaculum and the tubercles of the scaphoid and trapezium, and fuse distally to form a single tendon with a sesamoid bone within it, which attaches to the lateral base of the proximal phalanx of the thumb.

The superficial head of the flexor pollicis brevis is innervated by the recurrent branch of the median nerve, while the deep head receives its innervation from the deep branch of the ulnar nerve.

When they contract, they both flex the thumb.

Finally, there is the opponens pollicis, which lies deep to the abductor pollicis brevis.

This muscle also originates on the flexor retinaculum and tubercles of the scaphoid and trapezium, and it extends distally to attach to the lateral side of the shaft of the first metacarpal.

The opponens pollicis receives its innervation from the recurrent branch of the median nerve, and it opposes the thumb, by pulling the first metacarpal medially, towards the 5th digit.

Alright, next is the adductor compartment, which is located below the thenar muscles.

This compartment has only one muscle, called the adductor pollicis.

The adductor pollicis muscle also has two heads: an oblique head and a transverse head. T

he oblique head attaches to the base of the second and the third metacarpals, as well as the capitate carpal bone.

The proximal attachment of the transverse head is to the anterior shaft of the third metacarpal.

Distally, both heads of this muscle form a single tendon, which contains a sesamoid bone within it, and attaches to the medial base of the proximal phalanx of the thumb.

The adductor pollicis is innervated by the deep branch of the ulnar nerve, and when it contracts, it adducts the thumb.

Now, besides abduction, adduction, flexion and opposition, the thumb can also perform movements such as reposition, which is moving the thumb in the opposite direction to the opposition, and extension.

Now, before we move on, feel free to pause and see if you remember the nerve to the deep head of the flexor pollicis brevis?

Alright, now let's look at the muscles of the hypothenar compartment.

The hypothenar compartment also consists of three muscles, which move the little finger.

Inside the hypothenar compartment, we have the abductor digiti minimi, which attaches to the pisiform carpal bone proximally, and extends distally to attach to the base of the proximal phalanx of the little finger.