Achromasia, also known as albinism, is a set of inherited disorders that cause scant or no production of melanin, a natural skin pigment. The type and amount of melanin an individual’s body produces determines the color of their skin, hair, and eyes. Melanin also has a role in the development of the optic nerves.

Accordingly, the common signs and symptoms of achromasia tend to affect the hair, skin, and eyes. Hair color of individuals with achromasia can range from white to brown; however, those of African or Asian descent may have yellowish or reddish hair. Hair color may darken with age but varies from person to person. Eyelashes and eyebrows are often very similar in hue to the individual’s hair color and are typically pale. Eye color can range from light blue to brown and, like hair color, can also darken with age. Skin coloring for those with achromasia ranges from white to brown, but it is a less distinct sign of the condition since an individual with achromasia can have nearly the same skin tone as that of a parent or sibling who does not have achromasia. Oftentimes individuals with achromasia are more prone to the formation of freckles, moles, and sunburns upon sun exposure. This increased sensitivity to sunlight lends to an increased risk of developing skin cancer.

Though hair, eyes, and skin are the most recognizable ways to identify achromasia, visual impairment is an additional key feature of achromasia. Visual impairments that may arise include an inability of both eyes to focus on the same point or move in unison, extreme nearsightedness, extreme farsightedness, or rapid and involuntary back and forth movements of the eye (i.e., nystagmus). Other common visual difficulties include sensitivity to light, abnormal curvature of the front of the eye causing blurred vision, abnormal development of the retina causing reduced vision, poor depth perception, and, in some cases, legal blindness. 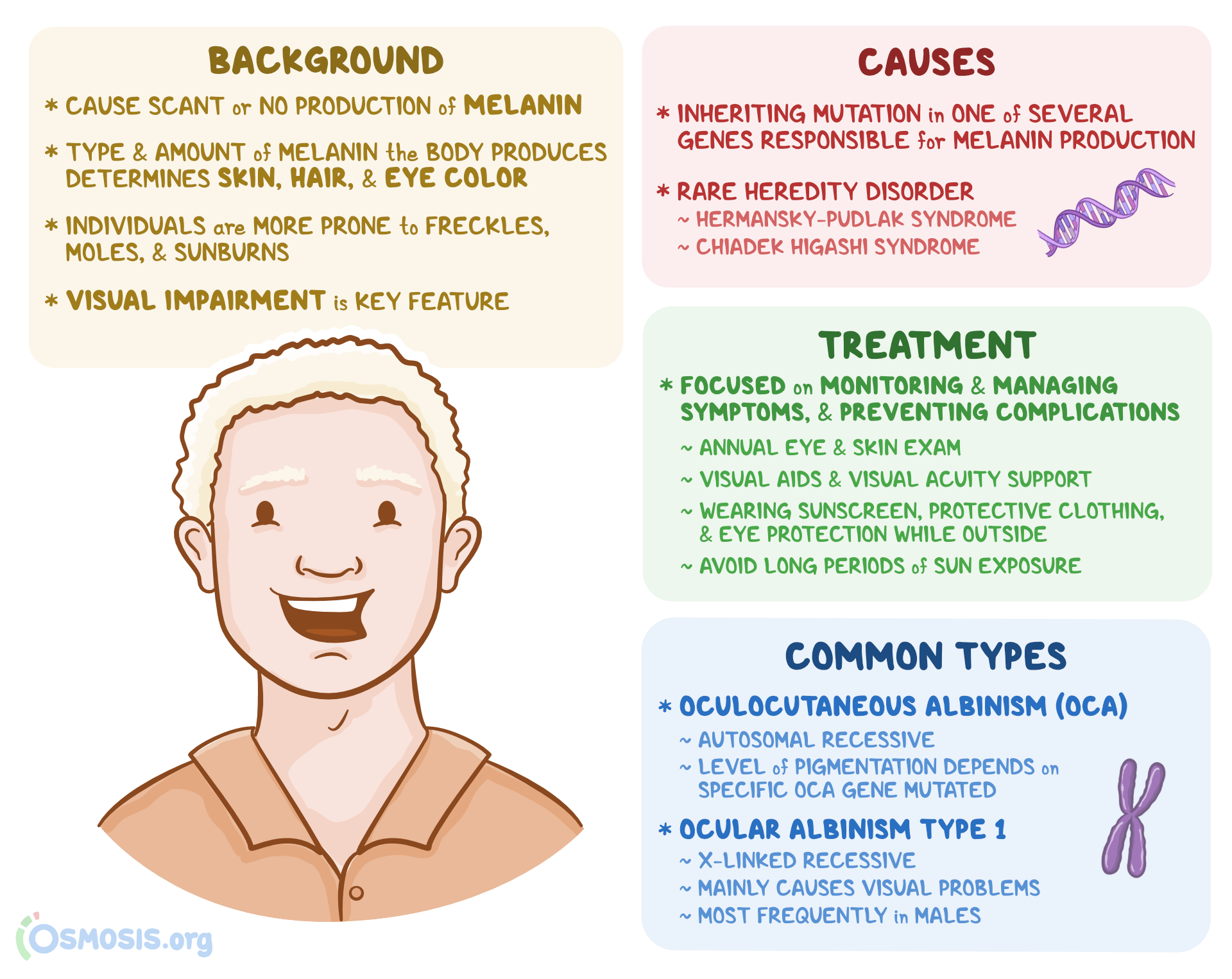 What are some of the common causes of achromasia?

The most common causes of achromasia result from inheriting a mutation in one of the several genes that are responsible for the production of melanin.

Oculocutaneous albinism (OCA) is the most common type of achromasia, and it occurs when an individual receives two copies of mutated genes, one copy from each parent. When a disorder is inherited in this way, it is called an autosomal recessive disorder. Inheritance of these mutations is a result of a mutation in one of the eight OCA genes, such as the TYR gene, TYRP1 gene, OCA2 gene, and others. Mutations in OCA genes can cause decreased pigmentation in the skin, eyes, and hair, as well as the characteristic visual problems. An individual’s particular level of pigmentation depends on the specific OCA gene that is mutated.

Finally, achromasia as a result of a rare hereditary disorder, such as Hermansky-Pudlak syndrome or Chiadek Higashi syndrome, can also happen. Hermansky-Pudlak is a disorder that results in OCA, bleeding problems, and possible lung and colon issues. Chiadek Higashi syndrome is a rare immune disorder that often presents in childhood with OCA, immunodeficiency, and bleeding and bruising problems.

How is achromasia diagnosed and treated?

Since achromasia is an inherited disorder, it cannot be cured, so treatment is focused on monitoring and managing symptoms, as well as preventing further complications. A treatment regimen may include an annual eye and skin exam to monitor for potential issues, such as skin cancer. Individuals with achromasia may need visual aids and visual acuity support. Other lifestyle interventions include wearing sunscreen, protective clothing, and eye protection, especially while outside. It is also suggested that individuals with achromasia avoid long periods of sun exposure. 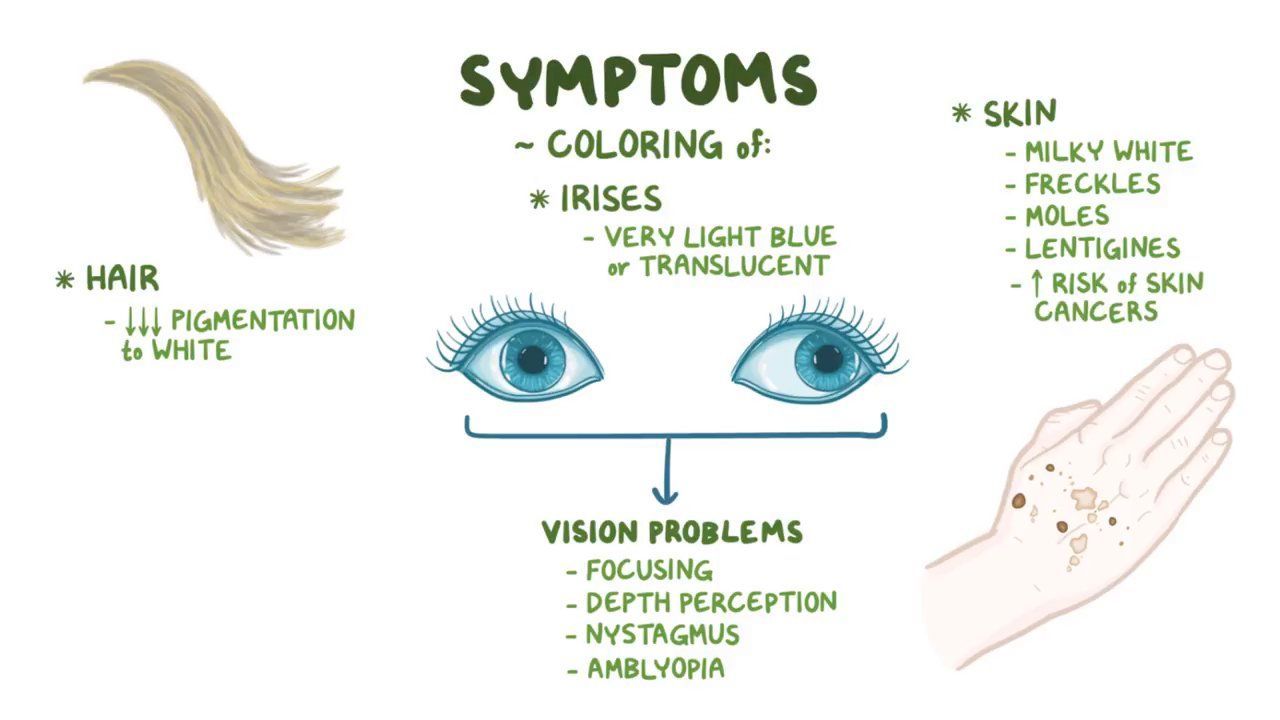 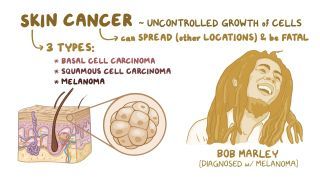 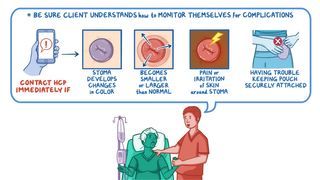