What is it, Causes and More

What is amaurosis fugax?

Amaurosis fugax, literally ‘dark fleeting’, refers to a sudden, short-term, painless loss of vision in one eye. It is also known as a retinal transient ischemic attack (TIA).  The loss of vision occurs most commonly in adults over 50 and may last anywhere between a few minutes to a couple of hours. The symptom is mostly associated with thrombotic vascular events originating from the internal carotid arteries, and is therefore considered a possible warning sign for an impending stroke. 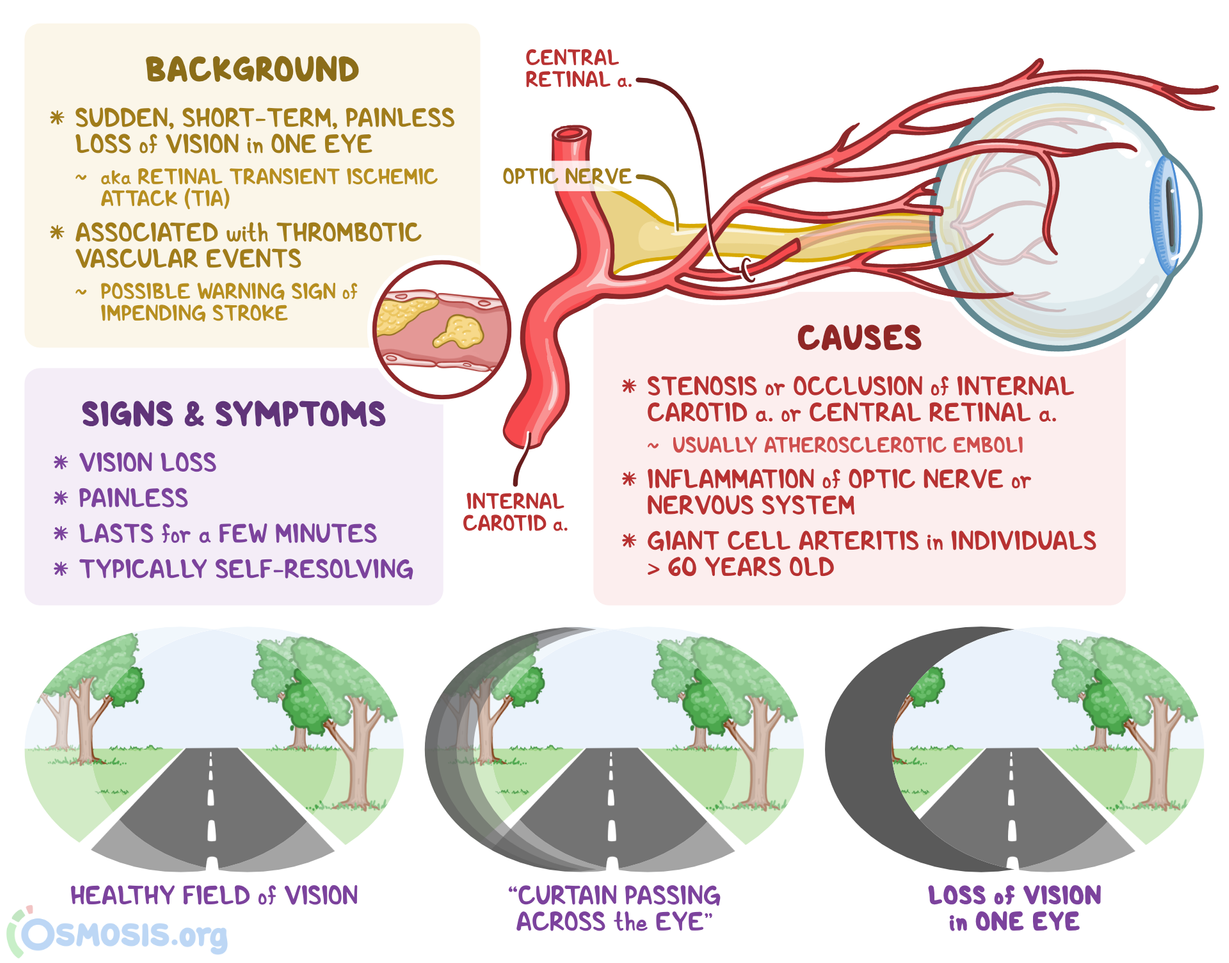 Is amaurosis fugax an emergency?

Amaurosis fugax is considered a medical emergency and requires immediate investigation of the underlying pathology.

Typically, amaurosis fugax is the result of narrowing (stenosis) or occlusion of the internal carotid artery or the central retinal artery, leading to hypoperfusion (i.e., low blood supply) of the retina. The most common cause of amaurosis fugax is atherosclerotic emboli (i.e., accumulations of fat that detaches from the inner lining of an artery and blocks blood flow elsewhere).

Amaurosis fugax can also occur as a symptom of other underlying conditions. For example, transient monocular visual loss can be caused by inflammation of the optic nerve (optic neuritis), nervous system (e.g. in multiple sclerosis) or in head injury. Individuals older than 60 years of age that have had multiple episodes of transient monocular blindness could also be investigated for giant cell arteritis, which is characterized by inflammation of the large vessels of the scalp, neck, and arms.

Several risk factors have been associated with the occurrence of amaurosis fugax. Diabetes, smoking tobacco products, and cocaine use can have long-term complications affecting the small blood vessels supplying the retina. Individuals reaching an advanced age also may be more likely to experience amaurosis fugax due to higher rates of hypertension (i.e., high blood pressure) and hyperlipidemia (i.e., high levels of lipids in the blood), and therefore greater risk for triggering the release of emboli. In some cases, exposure to bright light can trigger episodes of amaurosis fugax.

What are the signs and symptoms of amaurosis fugax?

Amaurosis fugax presents with very characteristic visual symptoms; most individuals describe their experience as a “curtain passing across the eye” that ultimately blocks their vision. The extent to which the eye’s visual field is affected varies; the entire field or only part of it may be defective. Visual loss is often painless for the individual and tends to last for a few minutes. Individuals may experience one or multiple episodes that typically resolve on their own, but there rarely may be progression to permanent loss of vision.

How is amaurosis fugax diagnosed?

Diagnosis usually relies on obtaining a medical history and assessment of any vascular risk factors present. Individuals are typically investigated for hypertension, diabetes, hyperlipidemia and cardiac disease, and are asked about tobacco use.  A detailed physical assessment, including a complete eye exam with pupil dilation in order to assess the optic nerve and optic disc and auscultation of the carotid arteries and the heart would be performed. Further blood tests, including a complete blood count, blood glucose level, and lipid levels may be ordered as well in order to rule out any underlying cause.

Doppler ultrasound, an imaging technique using high frequency sound waves bouncing from red blood cells, can be used on the carotid arteries to assess the extracranial  and intracranial perfusion of the tissues, while magnetic resonance angiography and computed tomography (CT) angiography can be used to evaluate the flow of the arteries.

How is amaurosis fugax treated?

Treatment is first aimed at controlling and treating the underlying vascular risk factors, such as hypertension, diabetes, and hyperlipidemia. Most individuals require conservative treatment with anticoagulants (medications that inhibit the blood clotting process), such as aspirin and clopidogrel. Asymptomatic individuals with severe carotid stenosis have been shown to benefit from minimally invasive techniques, such as carotid stenting (i.e., broadening of a narrow point within the vessel). More invasive techniques, including carotid endarterectomy (i.e., surgical removal of the vessel blockage) , are typically only for individuals with carotid stenosis greater than 70%.

What are the most important facts to know about amaurosis fugax?

Amaurosis fugax refers to a transient monocular visual loss, and is considered a medical emergency. It is usually caused by atherosclerotic emboli that leads to retinal artery occlusion, or other conditions, such as inflammation of the associated nerves and arteries. There are many risk factors associated with amaurosis fugax, including diabetes, hyperlipidemia as well as tobacco use. Visual symptoms associated with this condition are painless loss of vision identified in only one eye. Diagnosis mainly relies on a detailed medical history and eye exam, and additional imaging such as Doppler ultrasound or angiography can help confirm a diagnosis. Treating the underlying risk factors as well as administering anticoagulants is crucial. In more severe cases, invasive procedures such as carotid endarterectomy may be necessary. 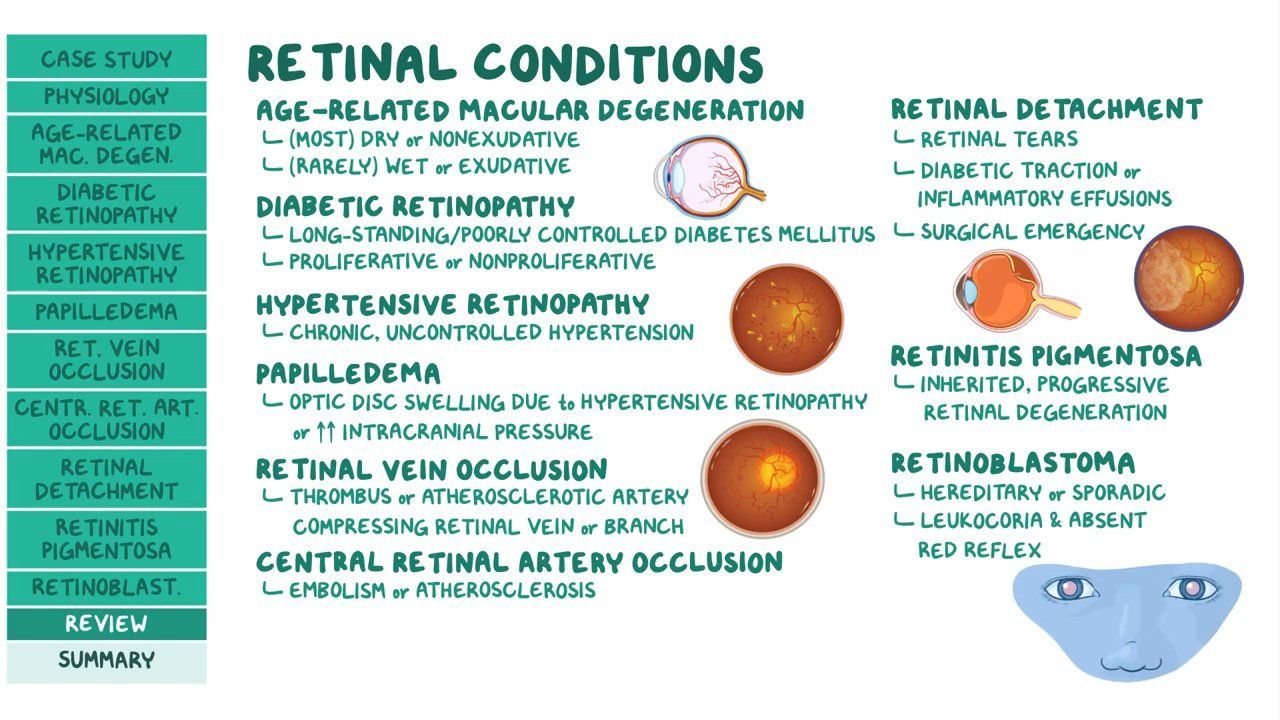 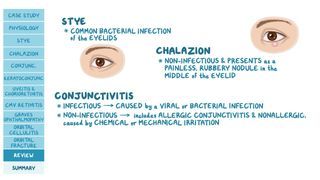 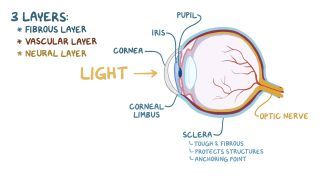