Chloasma, more commonly known as melasma, is an acquired pigmentary disorder of the skin, characterized by areas of discoloration known as hyperpigmentation. Hyperpigmentation refers to the darkening of one’s natural skin color due to an increased deposition of melanin, which is the pigment that determines one’s eye color, skin color, and hair color. Chloasma typically occurs symmetrically on both sides of the face and can sometimes occur in other sun-exposed areas. 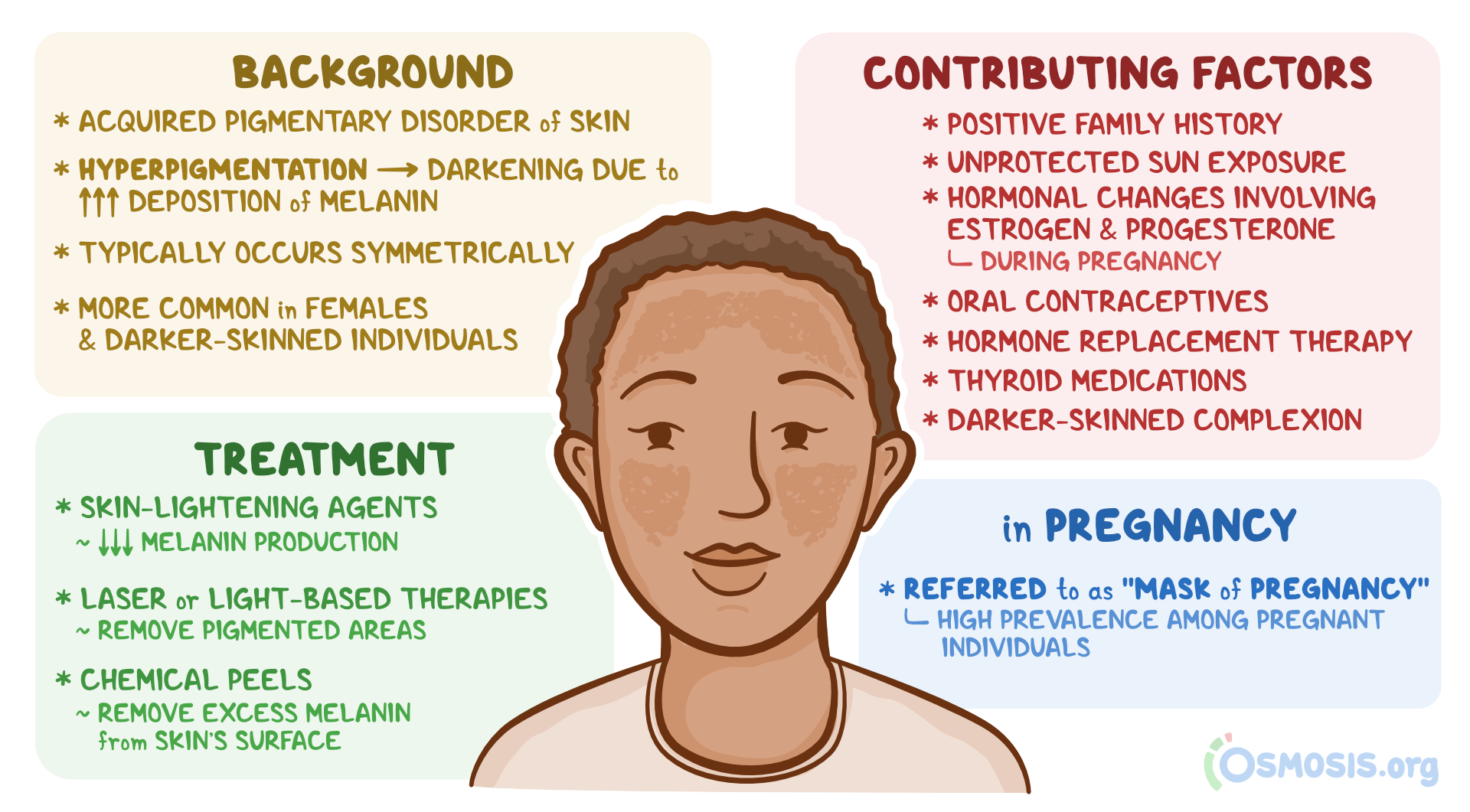 What is chloasma in pregnancy?

Chloasma is often referred to as the “mask of pregnancy” due to its high prevalence among pregnant individuals. The exact mechanism by which pregnancy triggers chloasma is not fully understood, although it is thought to be a result of the hormonal changes involving estrogen and progesterone that take place during pregnancy.

What is the difference between melasma and chloasma?

Chloasma and melasma refer to the same skin condition, and the terms can be used interchangeably depending on the context.

With chloasma, the pigment-producing cells of the skin (i.e., melanocytes) become overactive and produce too much melanin, which leads to hyperpigmentation. While the exact cause of chloasma is often unclear, there seem to be several contributing factors associated with its onset. These factors may include having a positive family history of chloasma; unprotected sun exposure; hormonal changes involving estrogen and progesterone, such as during pregnancy, with the use of oral contraceptives, or while undergoing hormone replacement therapy; medications that increase the skin's sensitivity to sunlight (e.g., thyroid medications); and having a darker-skinned complexion.

What are the signs and symptoms of chloasma?

Chloasma presents with irregularly-shaped skin patches that appear darker in color than the surrounding skin and have a net-like, or reticulate, appearance. Depending on the site of melanin deposition within the layers of the skin, the color of the lesions can vary from light to dark brown and, occasionally, ash-blue. The skin patches are often distributed symmetrically over sun-exposed areas, most notably on the cheeks, but can also occur on the nose, upper lip, chin, and forehead. The skin patches are typically well-circumscribed, ranging from less than 1 centimeter (cm), or about a third of an inch, to over 10 cm in size. Although chloasma does not typically cause symptoms, such as itching or pain, it can cause considerable cosmetic concerns and psychological distress, which may significantly impact the quality of life of the affected individual.

How is chloasma diagnosed?

Diagnosis of chloasma is based upon clinical observation of the skin lesions and usually will include a history of a predisposing risk factor. In some cases, examination under Wood’s lamp, which uses a fluorescent light to illuminate hyperpigmented skin patches, may be helpful to identify the extent of the chloasma. In rare instances, if the diagnosis is uncertain, a skin biopsy can be performed.

How is chloasma treated?

There are several treatment options for chloasma, including skin-lightening agents, chemical peels, and laser or light-based therapies. Skin-lightening agents are topical medications that aim to lighten hyperpigmented areas by decreasing melanin production. These medications include hydroquinone, retinoids, topical corticosteroids, azelaic acid, and tranexamic acid. All of these medications can be used as single agents or, more often, in combination with each other.

Individuals who do not respond well to these medications can be treated with chemical peels (e.g., glycolic acid), which aim to remove excess melanin from the skin’s surface, thereby decreasing hyperpigmentation. Chemical peels are often used in combination with skin-lightening agents to maximize effectiveness. Finally, if unresponsive to all other treatment options, individuals may receive laser therapy or light-based therapies to remove pigmented areas of skin.

Treatment of chloasma can sometimes be challenging, as it tends to be a long-lasting condition and may reoccur over time. As a result, maintenance therapies and strict sun protection are often necessary to control the condition. Regardless of the chosen treatment, certain measures can be taken to prevent further progression of chloasma, including avoiding or minimizing sun exposure, using broad spectrum sunscreens, and wearing wide-brimmed hats to protect the face from the sun.

Does chloasma go away?

Chloasma tends to fade away over time with appropriate treatment and strict sun protection. Nonetheless, it is a chronic condition, meaning that although the existing lesions may fade entirely, some individuals may still experience new flares with certain triggering factors, such as during periods of increased sun exposure, future pregnancies, treatment with oral contraceptives, or hormone replacement therapy.

How long does it take for chloasma to go away?

Chloasma typically begins to fade after a few months of optimal treatment or upon resolution of the potential contributing factors. For instance, when chloasma is triggered by hormonal changes related to pregnancy, hyperpigmentation usually fades away on its own a few months after delivery. In some individuals, the skin patches may not entirely disappear, but they can become less noticeable over time.

What are the most important facts to know about chloasma?

Chloasma, also known as melasma or the “mask of pregnancy,” is a pigmentation disorder of the skin characterized by darker skin patches that primarily affect the face and other sun-exposed areas. Chloasma is more common in individuals assigned as female at birth and in individuals with a darker skin complexion, and it is often associated with pregnancy and use of oral contraceptives. The exact cause of chloasma is not fully understood, although having a genetic predisposition, sun exposure, and hormonal changes seem to play a role in its development. Diagnosis of chloasma is based upon clinical observation of the skin lesions and any history of a predisposing risk factor. Chloasma can be treated with a combination of skin-lightening agents, chemical peels, and laser or light-based therapies. It is also important to maintain strict sun protection by avoiding unnecessary sun exposure, using broad spectrum sunscreens, and wearing wide-brimmed hats to protect the face from the sun.

Quiz yourself on Chloasma 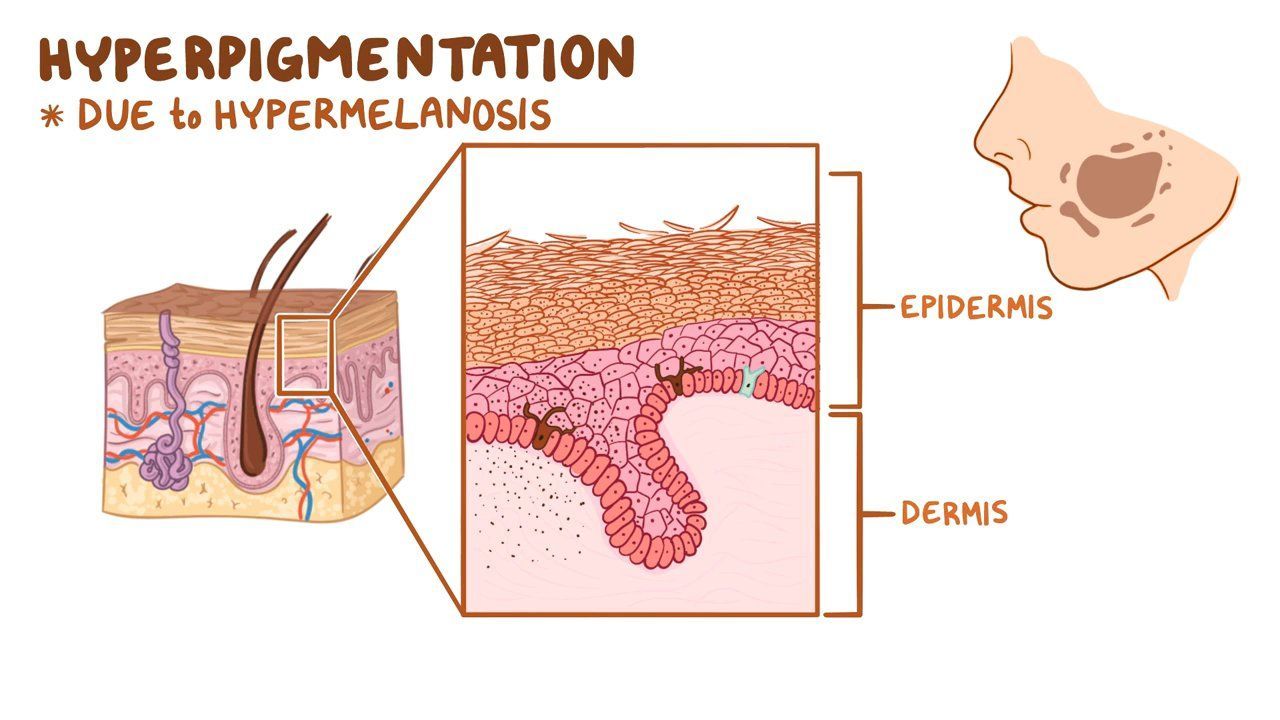 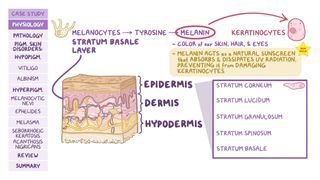 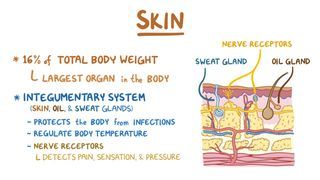 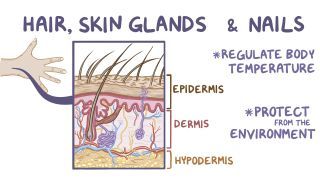