What is non-pitting edema?

Non-pitting edema refers to the accumulation of excess fluid in soft tissues, causing swelling. Although it can affect any part of the body, non-pitting edema is usually localized to certain body parts, such as the lower or upper limbs. 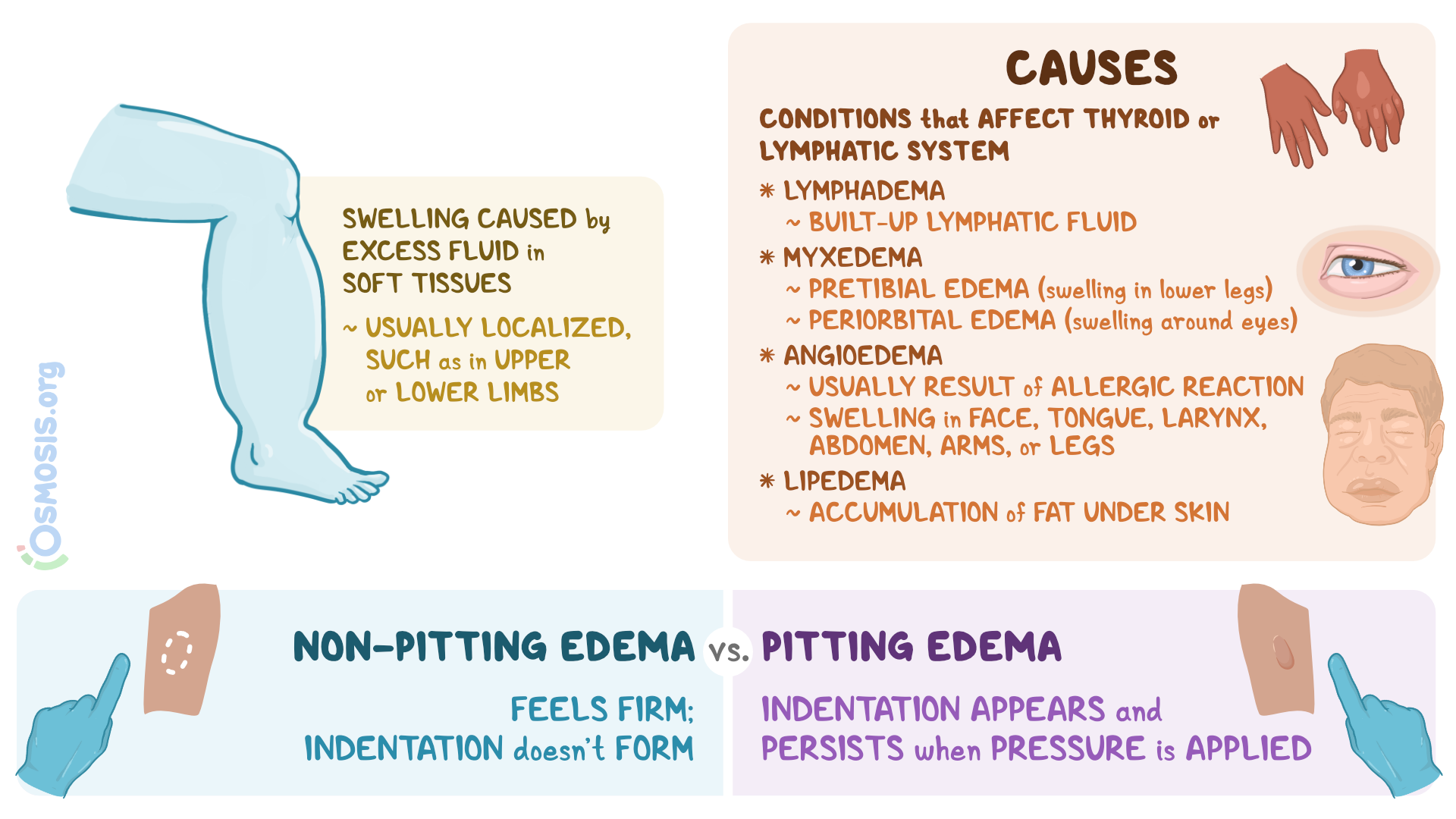 Pitting edema and non-pitting edema are both characterized by noticeable swelling due to the accumulation of excess fluids in tissues as a result of a disturbance in interstitial fluid (fluid found in the spaces around cells). Although both pitting and non-pitting edema can affect any soft tissue, both are generally classified as a peripheral edema, meaning they typically affect the arms or legs.

Pitting edema, however, can be distinguished from non-pitting edema due to the characteristic “pitting” effect it creates. When pressure is applied to the skin of someone with pitting edema, a persistent pit, or indentation, appears in the affected area. Some of the most common causes of pitting edema are congestive heart failure, venous insufficiency (improper functioning of the veins in the legs), or nephrotic syndrome (a kidney disorder). On the other hand, non-pitting edema feels firm to touch and does not form indentations.

Although non-pitting edema itself is not considered dangerous, its underlying cause may be of greater concern. It is highly recommended to seek out medical attention in order to diagnose and treat any dangerous underlying causes.

Non-pitting edema can be caused by a variety of medical conditions. In most cases, it serves as a sign that a given condition is affecting the thyroid or the lymphatic system, which works to protect the body against microbes, maintain adequate fluid levels, absorb nutrients, and remove certain waste products. Depending on the specific cause, non-pitting edema can result from problems that cause lymphedema, myxedema, angioedema, or lipedema.

Lymphedema occurs when lymphatic fluid builds up in tissues and causes swelling, or non-pitting edema, usually in the legs or feet. Lymphedema can be classified as either primary or secondary, depending on the origin of the condition. Primary lymphedema is the result of a rare, inherited condition that results from errors in lymphatic development and can present at different stages of life. An example of a primary lymphedema condition is Milroy disease, a genetic disease that leads to lymphatic malfunction and consequent swelling in the legs.

Secondary lymphedema is much more common as it is typically the result of injury to a fully developed lymphatic system. It can occur when flow of lymphatic fluid is blocked by cancerous cells, compressed externally by a tumor, or damaged following radiotherapy (a treatment often used for certain cancers). Secondary lymphedema most commonly occurs in individuals who have undergone treatment for breast cancer, as a consequence of the removal of lymph nodes. The most common cause of pediatric lymphedema is a condition called lymphatic filariasis, which is a parasitic infection typically caused by the Wuscheria bancrofti worm.

Myxedema, also called thyroid dermopathy, can occur in individuals with severe or advanced hypothyroidism—often referred to as Graves disease and characterized by low levels of thyroid hormones. This can lead to an increased accumulation of fluids and other substances, often affecting the legs, feet, eyes, or mouth. Myxedema affecting the lower legs, known as pretibial edema, is the most common type. Periorbital edema, or edema around the eyes, is also often seen and results in swollen eyelids.

Angioedema refers to the localized swelling of the skin. It is usually the result of a reaction to certain allergens, such as nuts or specific medications. In some cases, however, the cause is unknown. Some allergic reactions may be characterized as anaphylactic reactions, which are severe and often life-threatening. In rare instances, the occurrence of angioedema may be inherited. Angioedema typically causes swelling in the face, tongue, larynx (located in the throat), abdomen, arms, or legs. If the swelling involves the upper part of the larynx, it may disrupt breathing and could be life-threatening.

Lipedema refers to the accumulation of fat in the subcutaneous tissue, or the layer just below the skin. It predominantly affects the legs and buttocks, and occurs almost exclusively after puberty in individuals who were assigned female at birth.

What are the signs and symptoms of non-pitting edema?

Signs and symptoms of non-pitting edema may vary depending on the underlying cause. Generally affected body parts can feel tender, have tense skin, experience and limited movement. Edema in the leg can also cause the lower limb to feel heavy and can interfere with walking. Severe non-pitting edema can also restrict the blood flow and lead to ulcers, and sometimes infections, on the skin.

How do you diagnose non-pitting edema?

Non-pitting edema is generally identified through an individual’s detailed medical history and a physical examination that assesses the affected areas. In cases of suspected lymphedema, a Stemmer sign is assessed by attempting to pinch and lift the skin on the top of the hand or foot, depending on where the edema is located. If the skin cannot be pinched, the sign is positive, indicating lymphedema; if the skin can be pinched, the sign is negative, suggesting the likelihood of another type of pitting or non-pitting edema.

Additional diagnostic methods can include thyroid function tests or a specific type of radioactive imaging called lymphoscintigraphy. This imaging test shows the movement of fluids in the lymphatic system and can detect unusual occurrences that may have caused the edema. Lymphoscintigraphy is primarily used in cancer diagnosis to identify the initial lymph nodes associated with the cancer (i.e. sentinel lymph node).

Further differential diagnosis is usually required in order to determine the specific underlying cause and any additional long-term health conditions.

How do you treat non-pitting edema?

Treatment for non-pitting edema is largely determined by the underlying cause. Most mild cases of lymphedema can resolve with exercise, which enhances lymphatic flow, and elevation of the affected limb, which helps with the circulation of lymph. In more severe cases of lymphedema, treatment can involve decongestive physiotherapy, such as lymphatic massage, multilayer bandaging, or wearing compression garments. In cases of myxedema, synthetic hormone medications, such as levothyroxine, are often prescribed to help resolve the underlying hypothyroidism. In order to treat angioedema, medications, such as antihistamines, corticosteroids, or in severe cases, epinephrine may be used to relieve inflammation and swelling. Finally, lipedema can be managed but not necessarily cured with liposuction, or the surgical removal of fat.

What are the most important facts to know about non-pitting edema?

Non-pitting edema occurs when excess fluid builds up in the body causing swelling that does not indent when pressure is applied. It usually occurs in the limbs, and often results from underlying medical conditions affecting lymphatic system function. Diagnosis of non-pitting edema involves thorough medical history review, physical examination, and occasionally blood tests and imaging. Treatment for non-pitting edema largely depends on the underlying cause.