What Is It, Causes, Types, Treatment, and More

Pruritus, more commonly described as itchiness, refers to an uncomfortable sensation of the skin that typically triggers an urge to scratch. Pruritus can be transient or can persist for a longer amount of time, which often indicates a more significant underlying cause. If itching persists past six weeks, it is known as chronic pruritus. Pruritus can either be localized to one part of the body or more generalized to several areas. It is often a sign of certain skin conditions, other systemic diseases, or may simply be the result of an irritant in contact with skin. 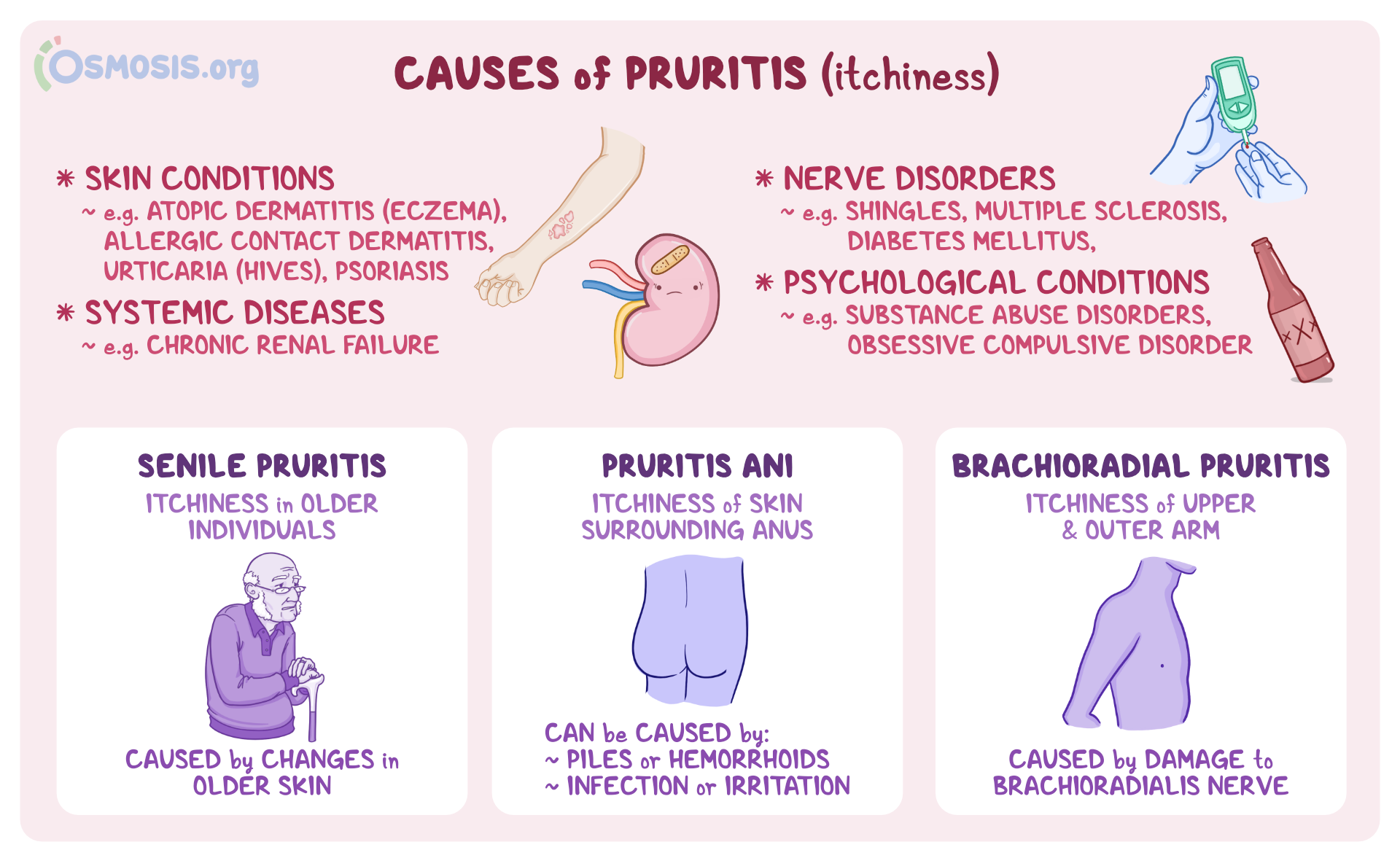 Pruritus can be caused by a number of factors including skin diseases, systemic diseases, nerve disorders, psychological conditions, or simply, irritation.

Skin conditions that commonly cause pruritus include atopic dermatitis and allergic contact dermatitis. Atopic dermatitis, often referred to as eczema, occurs as a result of an increased inflammatory response to a variety of potential irritants, such as dust, environmental pollution, pets, food, and more. Individuals with atopic dermatitis usually have rashes, scaly patches, and itchiness on the face, arms, or legs. Meanwhile, allergic contact dermatitis occurs when individuals come into contact with substances or objects that might trigger a skin reaction. Common objects that trigger contact dermatitis include wrist watches, soaps, clothes, and jewelry containing chemical substances that may cause sensitivity. The affected region of skin will often present with eczema-like rashes and pruritus.

Urticaria, commonly referred to as hives, is another skin disorder that can occur in response to allergens or irritants such as medications, foods, insect bites, infections, cold climate, or certain materials like latex. With urticaria, pruritus can occur all over the body, typically at the site of the hives, which appear as red, raised bumps on the skin often accompanied with angioedema, or the swelling of the face, lips, arms, legs, abdomen, or genitalia.

Additionally, individuals with psoriasis, a skin disease in which an increased production of skin cells results in hardened, raised, and scaly patches of skin, may present with pruritus in the affected areas. Psoriasis is most commonly experienced over the scalp, knees, and elbows.

Other skin disorders that can cause pruritus include dry skin, advanced age, sunburns or an increased sensitivity to sunlight, insect bites, and infestations of mites or lice.

Pruritus in systemic diseases is generalized, which means it can occur all over the body. It is commonly seen in individuals with chronic renal failure or kidney disease and is known as uremic pruritus. Another common systemic occurrence is cholestatic pruritus which can result from diseases of the liver, gallbladder, or biliary tract. Systemic infections, such as HIV and chickenpox, can also result in widespread pruritus.

Additionally, disorders of the thyroid gland such as hypothyroidism and hyperthyroidism, as well as certain blood disorders, such as iron deficiency anemia, can lead to pruritus.

Certain nerve disorders that can lead to tingly and itchy sensations in various parts of the body may be another cause of pruritus. For example, brachioradial pruritus occurs as a result of damage to the brachioradialis nerve located in the arm, resulting in itchiness of the upper and outer regions of the arm. Another cause of nerve-related pruritus is herpes zoster, commonly referred to as shingles, which results from the reactivation of dormant varicella-zoster viruses (the virus that causes chickenpox) in the body. Shingles can lead to pain, burning, rashes, fluid-filled blisters, and pruritus of the affected skin. Pruritus is also commonly seen in individuals with multiple sclerosis, an immune condition in which the protective covering of the nerves is broken down, resulting in numbness, muscle weakness, and itchy or tingly sensations over the skin. Multiple sclerosis often presents with other symptoms, including speech, visual and bladder problems. Finally, pruritus can also occur in individuals with diabetes mellitus as a result of diabetic neuropathy, or a disorder of peripheral nerves.

Pruritus occurring as a result of psychological conditions is referred to as psychogenic pruritus or somatoform pruritus. Examples of conditions that may trigger this include substance abuse disorders or obsessive compulsive disorder. Additionally, some individuals may experience delusional parasitosis, which refers to the belief that their skin is infested with parasites, worms, insects, or bugs, even though there is no actual infestation.

What is senile pruritus?

What is pruritus ani?

What is brachioradial pruritus?

Brachioradial pruritus refers to the itchiness of the upper and outer arm due to damage of the brachioradialis nerve located in the arm. Such damage typically results from spinal problems or increased sun exposure and is most commonly seen in hikers, bikers, tanners, and middle-aged individuals in warm, sunny weather.

How do you treat pruritus?

Treatment for pruritus largely depends on the underlying cause of the itchiness. However, to manage the associated itchiness, it is important to break the itch-scratch cycle. The itch-scratch cycle is triggered by an initial urge to scratch that then, may amplify the itchy sensation and subsequently, lead to more scratching. The first line of defence in overcoming the itch-scratch cycle is treating dry skin with moisturizers. Individuals should also avoid hot baths and other irritants, such as synthetic fabrics, or known allergens, such as pet dander, specific foods, dust, and certain medications.

Localized pruritus can usually be treated with topical agents—such as creams, lotions, or gels—that can be directly applied to the affected area. These topical agents may contain medications, such as antihistamines or corticosteroids, that can reduce inflammation. In many cases, capsaicin cream may also be helpful in relieving itchiness. For systemic disorders, which usually manifest with generalized pruritus, oral medications, including antihistamines, corticosteroids, or other immunosuppressive medications, may be required.

In any case, it is important to treat the underlying condition to prevent recurring pruritus. In the case of nerve-related pruritus, anticonvulsant and antidepressant medications may be used. In some cases, treatment with phototherapy, in which the affected area is exposed to ultraviolet radiation, may be recommended. This is often used when treating atopic dermatitis and psoriasis.

How do you treat pruritus ani?

How do you treat brachioradial pruritus?

What are the most important facts to know about pruritus?

Pruritus, or itchiness, is a sensation of the skin that often creates an urge to scratch. It can result from a variety of causes, including skin diseases, nerve disorders, systemic diseases, and psychological conditions. It is most commonly seen in inflammatory skin diseases, such as atopic dermatitis and allergic contact dermatitis. Senile pruritus refers to the pruritus in elderly individuals due to age-related skin changes. Brachioradial pruritus is a type of nerve-related pruritus resulting from damage to the brachioradialis nerve located in the arm. Pruritus ani refers to pruritus in the anus region and is often seen in individuals with perianal disorders such as hemorrhoids or perianal infection. More generally, pruritus can be caused by contact with an irritant, such as certain fabrics or chemicals. Treatment of pruritus focuses on breaking the itch-scratch cycle by keeping the skin adequately hydrated and treating it with topical or oral medications. Depending on the underlying cause, additional treatments may be required.

Quiz yourself on Pruritus 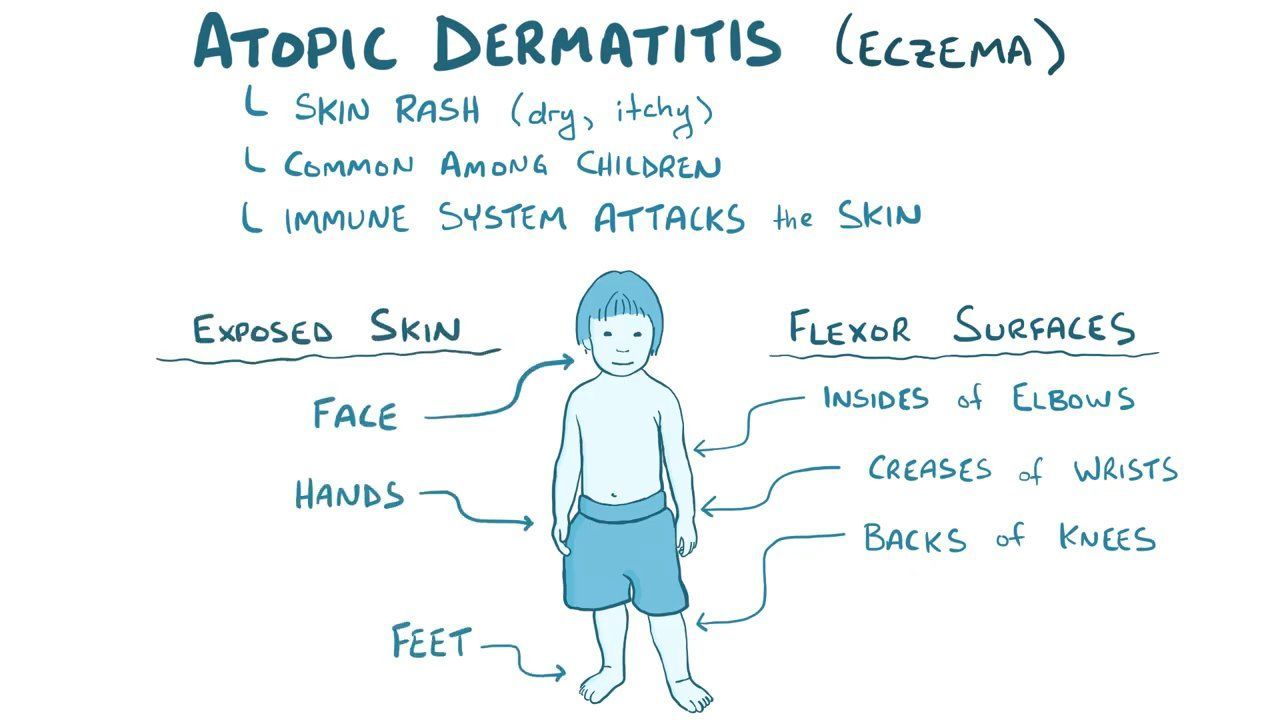 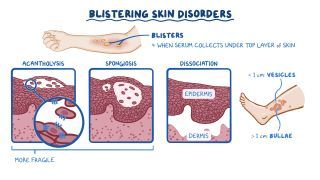 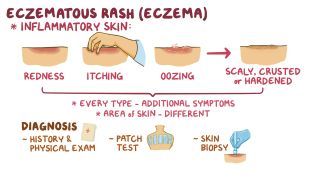 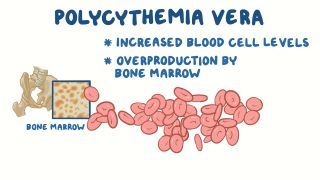