What Are They, Where They Are Found, and More

Psammoma bodies are round, microscopic calcifications (collections of calcium salts). Their name is derived from the Greek word for sand because they resemble grains of sand. They also have a concentric laminated, or onion-like, appearance. Psammoma bodies are generally found in damaged tissues, and are commonly associated with malignant cancers as well as some benign, non-cancerous conditions. Their main function is to halt the growth of cancer, and serve as a barrier against the spread of malignant cancer cells. Although psammoma bodies are typically seen microscopically, some can be big enough to be detected through computerized tomography (CT) imaging. 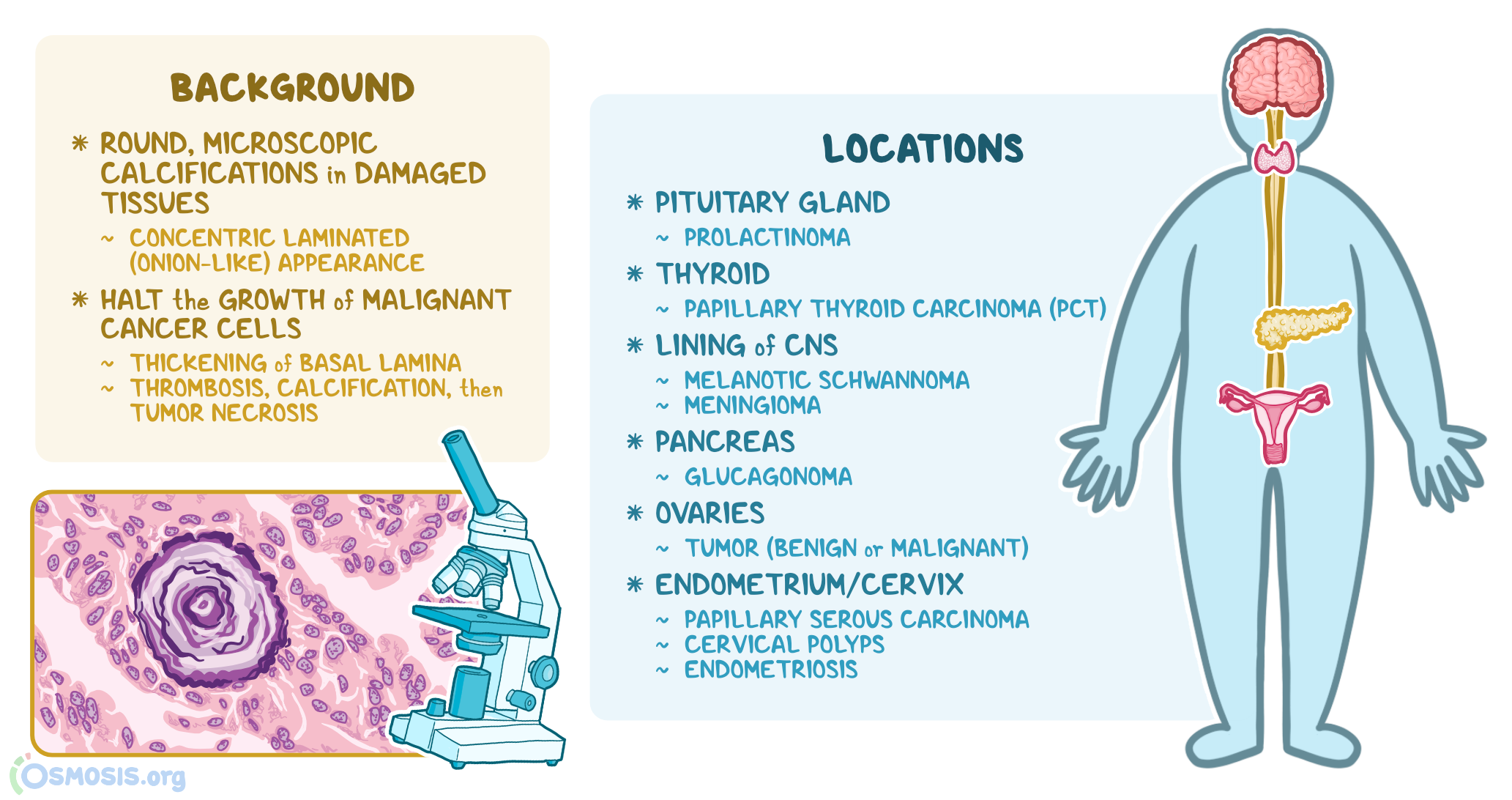 Where are psammoma bodies found?

Psammoma bodies—from both non-cancerous and cancerous conditions—can be detected after a biopsy of the mass is taken and stained with haematoxylin and eosin, a principle tissue stain used in histology. Ultrasound may also be used to detect calcifications of thyroid nodules.

Which cancers have psammoma bodies?

Psammoma bodies are found in a variety of cancers. They are commonly a diagnostic feature of papillary thyroid carcinoma (PTC), the most common form of thyroid cancer. In individuals with PTC, detection of psammoma bodies usually means that the individual is more likely to have lymph node metastasis (spread of cancerous growth) and high-stage cancer when compared to those without psammoma bodies. PTC and other thyroid cancers are often detected using fine-needle aspiration (FNA), in which a small hollow needle is used to remove a sample of cells from the thyroid gland at the front of the neck. Psammoma bodies are also commonly detected in papillary serous cystadenocarcinoma of the ovary, the most prevalent form of malignant ovarian cancer.

Other, less common, cancers in which psammoma bodies can be found include papillary serous carcinoma of the endometrium, a rare form of cancer in the lining of the uterus; melanotic schwannoma, a rare tumor that forms in the nerve sheath lining the nerves that extend from the spinal cord into the body; as well as with some lung cancers.

Little is known of the exact mechanisms responsible for the formation of psammoma bodies, but it is believed that they are caused by the thickening of the bottom-most layer of cells, referred to as the basal lamina, which often occurs in some early stages of cancer. This unusual process is followed by thrombosis (blood clotting), calcification, and then tumor necrosis (cell death). It is hypothesized that rather than being an outcome of calcification of dead tissue, psammoma bodies may represent an active process that leads to the degeneration and death of tumor cells. In the case of papillary thyroid carcinoma, psammoma bodies may be a result of thyroid tumor thrombi, which refers to a part of the tumor having migrated into the lymphatic system, and calcified there.

What are the most important facts to know about psammoma bodies?

Psammoma bodies are round, microscopic calcifications found in certain cancers, most commonly papillary thyroid carcinoma and papillary serous cystadenocarcinoma of the ovary. Psammoma bodies can also be detected in non-cancerous, benign conditions such as meningiomas, benign ovarian tumors, cervical polyps, and endometriosis. They are suspected to be caused by thickening of the basal lamina, thrombosis, calcification, and necrosis of the affected area in an attempt to halt the growth and spread of cancer cells. In the case of papillary thyroid carcinoma, psammoma bodies may represent thrombosis and calcification of the thyroid tumor in the lymphatic system.

Quiz yourself on Psammoma Bodies 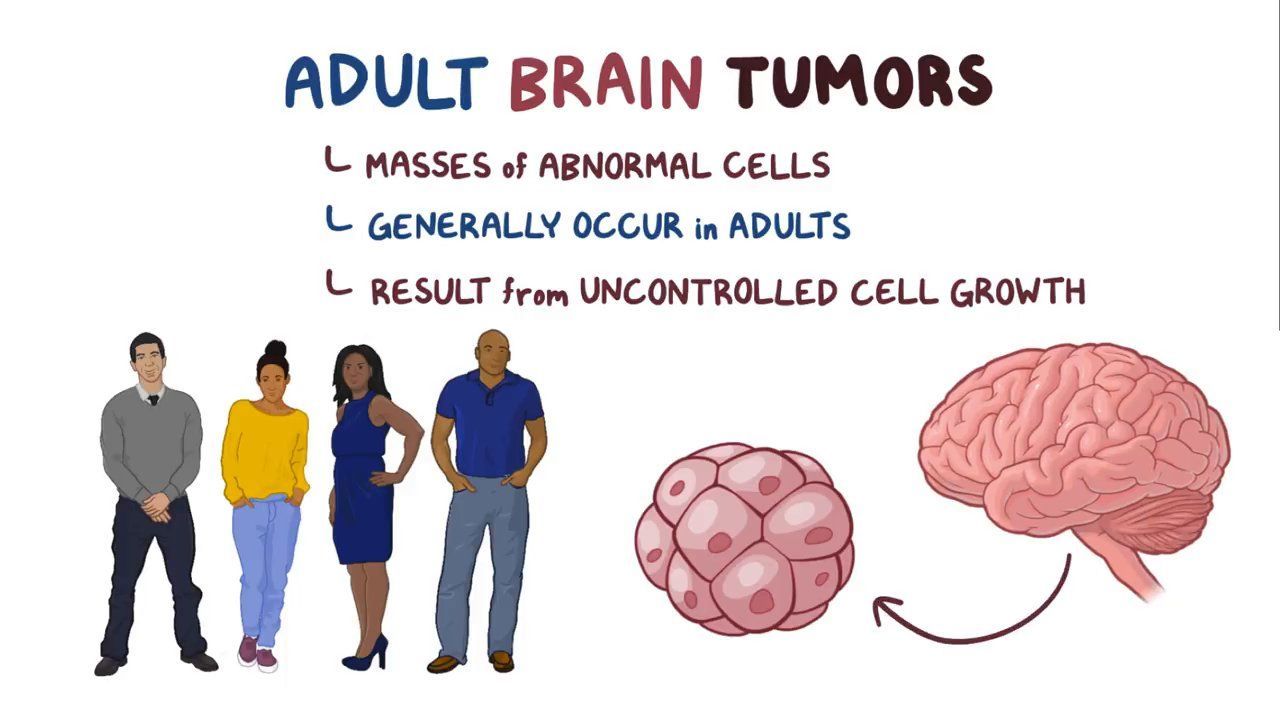 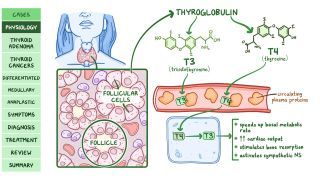 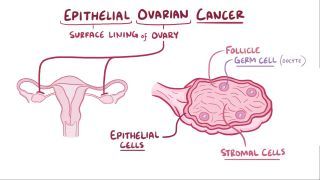 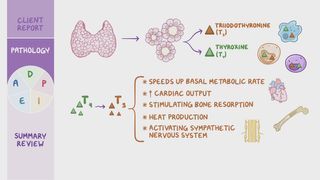