Assessments
Anatomy of the arm

Anatomy of the Arm Figure 2. Anterior view of arm showing A arteries and deep veins and B superficial veins. 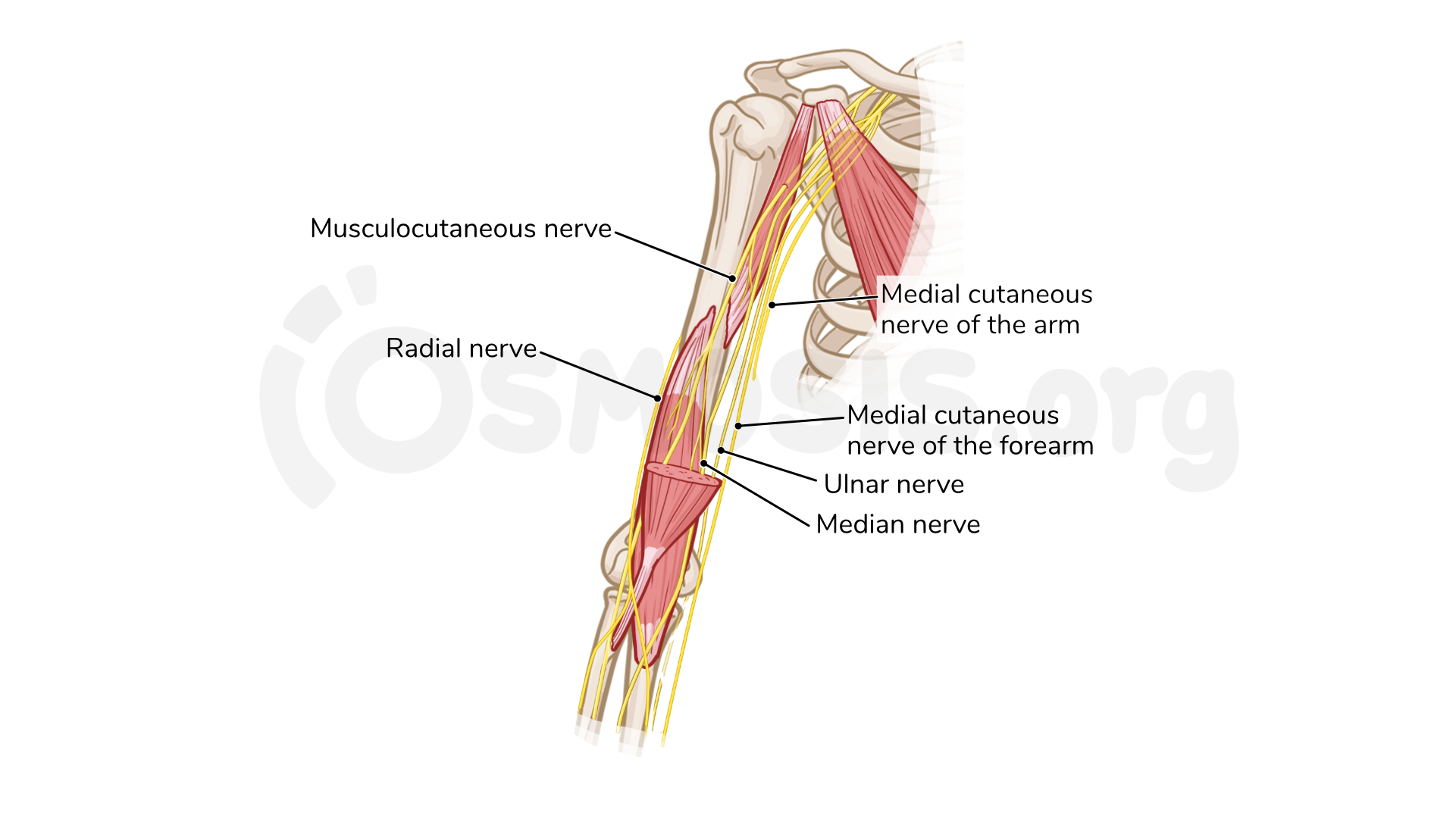 Figure 3. Anterior view of nerves of the upper arm. 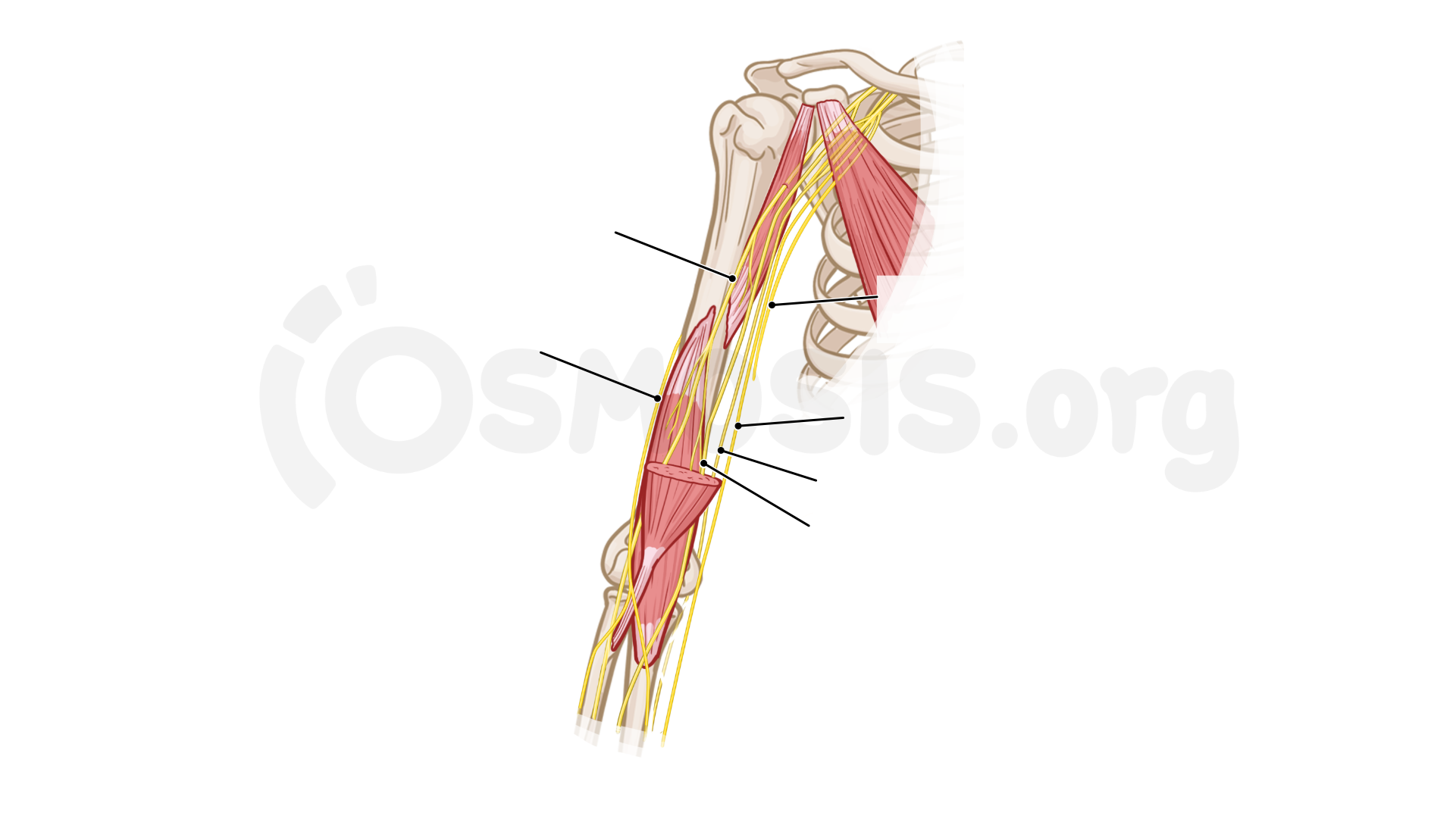 A patient experiences a blockage of the distal brachial artery at the elbow, before its bifurcation. What direct branch of the brachial artery will most likely provide circulation to the elbow?

Anatomically speaking, the arm is the part of the upper limb that is between the shoulder and the elbow joint.

It has only one bone called the humerus, and an intricate network of muscles, vessels and nerves distributed around it.

The arm muscles are divided into two compartments separated by the humerus and the medial and lateral intermuscular septae.

Then there’s the posterior compartment. This one houses muscles responsible for elbow extension. So it’s also called the extensor compartment.

These two compartments mainly act on the elbow joint, but some muscles can also act on the glenohumeral joint.

Now, the anterior compartment contains three muscles: the biceps brachii or simply the biceps; the brachialis; and the coracobrachialis muscles. The biceps muscle usually has two heads, a short head and a long head.

It is held in the bicipital groove by the transverse humeral ligament, which extends from the lesser to the greater tubercle of the humerus to turn the groove into a canal for the tendon of the long head.

Both of these heads converge together and attach distally to the tuberosity of the radius, and blend with the fascia of the forearm via the bicipital aponeurosis.

The bicipital aponeurosis is a triangular membranous band that runs across the cubital fossa to blend with the deep fascia covering the flexor muscles on the medial side of the forearm.

The biceps is innervated by the musculocutaneous nerve, and acts on three different joints; the glenohumeral, the elbow joint, and the proximal radio-ulnar joint, though it primarily acts on the latter two.

On the glenohumeral joint, the biceps helps to prevent dislocation and stabilize the shoulder joint due to the tendon of the long head supporting the humeral head into the glenoid cavity. The biceps also has a minor role in flexing and adducting the arm.

Due to the orientation of the bicipital aponeurosis, flexion of the biceps pulls the aponeurosis and helps the supinator muscle to supinate the forearm, which is turning the palm upwards.

To remember the action of forearm supination, think about cupping your hands together to form a bowl and using it to drink a bowl of soup!

Alright, the next muscle in the anterior compartment is the coracobrachialis, which lies in the superior part of the arm towards the medial side.

As a member of the anterior compartment, it's also innervated by the musculocutaneous nerve. The coracobrachialis mainly helps to flex and adduct the glenohumeral joint.

It also plays an important role in stabilizing the shoulder joint by resisting downwards dislocation. Finally, the third muscle in the anterior compartment of the arm is the brachialis.

Proximally, the brachialis muscle attaches to the distal half of the anterior surface of the humerus. It then extends distally, crosses the elbow joint to attach to the coronoid process and tuberosity of the ulna.

The brachialis only has one role: it flexes the forearm at the elbow joint, regardless of whether it’s pronated or supinated.

Now let’s switch gears and look at the two muscles in the posterior compartment of the arm: the triceps brachii or just the triceps, and the anconeus muscles, both of which are innervated by the radial nerve. With three bulky heads, the triceps is the main extensor of the forearm.

As the muscle extends distally, all of its three heads fuse together, having a common distal attachment that is to the olecranon and the fascia of the forearm.

All three heads contribute to the extension of the forearm, however the medial head is the workhorse of forearm extension.

The long head in particular also helps stabilize the shoulder joint and prevents dislocation by resisting downward forces of the arm.

It also helps extend and adduct the glenohumeral joint. Finally, let’s talk about the anconeus, which is this small triangular muscle at the posterior aspect of the elbow.

Proximally, the anconeus attaches to the lateral epicondyle of the humerus. It extends distally to attach to the lateral surface of the olecranon and the proximal ulna.

The contraction of the anconeus assists the triceps in extending the forearm, and adds some stability to the elbow joint.

Alright!! Now let’s pause for a minute and see if you can identify the five muscles of the arm! Ok then! Now let’s have a look at the nerves of the arm.

First, there is the musculocutaneous nerve.This nerve originates from the C5, C6, and C7 spinal nerve roots, and emerges as the terminal branch of the lateral cord of the brachial plexus, at the inferior border of the pectoralis minor muscle.

It pierces the coracobrachialis muscle, and continues distally, passing between the biceps and the brachialis.

At this point, it sends branches that supply all of these three muscles, and then emerges lateral to the biceps with a new name: the lateral cutaneous nerve of the forearm where it supplies the skin of the lateral forearm.

Next, there’s the median nerve, which originates from the C6, C7, C8, and T1 spinal roots, and arises from the medial and the lateral cords of the brachial plexus, and descends from the axilla to the arm.

In the arm, the median nerve initially runs on the lateral side of the brachial artery until it reaches the middle of the arm.

At this point, the median nerve crosses the brachial artery over to the medial side. This nerve keeps descending in the cubital fossa, passing deep to the bicipital aponeurosis and the median cubital vein.

Next, there’s the ulnar nerve. It originates from the C8 and T1 spinal roots, and emerges from the medial cord of the brachial plexus.

It then travels from the axilla to the arm, passing anterior to the teres major attachment on the humerus and to the long head of the triceps muscles, on the medial side of the brachial artery.