During B-cell development, a hematopoietic stem cell becomes a cell. 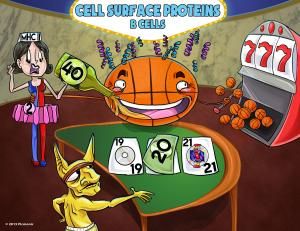