The most common known cause of intussusception in children is .

An 18-month old boy comes to the emergency department with an 8-hour history of non-bilious, non-projectile vomiting and abdominal pain.The pain began suddenly and was intermittent with periods of complete resolution in between episodes. His parents note that he had several bowel movements containing both blood and mucus. Two weeks ago, he had an upper respiratory infection, but he has otherwise been healthy and developing appropriately. He is curled in pain on the examination table with his knees to his chest. Physical examination shows right upper and lower quadrant tenderness to palpation without rebound tenderness or tympany. A sausage-shaped mass can be palpated in the right upper quadrant. Rectal examination shows normal sphincter tone and the fecal occult blood test is positive. Barium enema is done, showing intussusception of the distal segment of ileum into the cecum. Which of the following intestinal layers within the entrapped segment of the ileum is most vulnerable to ischemia from lack of arterial blood supply? 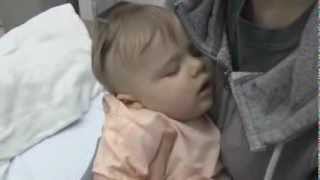 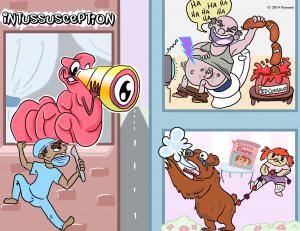 Intussusception is a condition that occurs when a part of the intestine folds into another section of intestines, resulting in obstruction.

This is commonly referred to as telescoping, because it’s similar to how one part of a collapsible telescope retracts into another part.

Intussusception is the most common cause of intestinal obstruction in infants and young children, with about two-thirds of them happening among infants under one year of age, though adults can occasionally have intussusception too.

In adults, telescoping is usually caused by an abnormal growth in the intestine, like a polyp or a tumor, which serves as a lead point or leading edge.

What happens is that the normal wave-like contractions of the intestine, called peristalsis, grab this leading edge and pull it into the part of the bowel ahead of it.

In babies the leading edge is most often caused by lymphoid hyperplasia, or the enlargement of lymphoid tissue.

There are a ton of tiny lymph nodes sprinkled throughout the intestines called Peyer’s patches, and they’re particularly common in the ileum.

When a child gets some sort of viral infection in the gastrointestinal tract, usually caused by rotavirus or norovirus, the Peyer’s patches enlarge to help fight off the infection, and sometimes become a lead point that drags the ileum into the cecum, causing intussusception.

Intussusception can also be caused by a Meckel’s diverticulum, which is an abnormal outpouching of gastrointestinal tissue, that sticks out of the ileum and into the peritoneal cavity.

Occasionally, the diverticulum can invert and stick back into the intestine, allowing it to serve as a lead point that again drags the ileum into the cecum.

Although these are well known mechanisms for intussusception, the majority of cases are considered idiopathic, meaning that they happen without a clear cause.

Risk factors include having had one previously or having a sibling with intussusception, as well as having intestinal malrotation - which is a condition where the intestine doesn't rotate correctly during fetal development.

Now, when an intussusception develops, the first sign is intermittent abdominal pain that worsens with peristalsis, sometimes causing a child to guard their abdomen—for example, they may swat away the hands of a caretaker—or draw their knees up toward the chest.

Other classic findings include vomiting, and the presence of a hard sausage-like mass in the abdomen.