What Are They, Causes, Treatment and More

Hiccups, medically known as singultus, refer to sudden, involuntary contractions of the diaphragm, a muscle involved in breathing that is located between the chest and the abdomen. These contractions result in abrupt inhalations of air that are usually followed by a characteristic “hic” sound created by the sudden closure of the vocal cords.

Hiccups occur as a result of the hiccup reflex, a type of reflex arc. A reflex arc is a neurological pathway that provides an immediate, involuntary response to a certain stimulus. The hiccup reflex involves the phrenic, vagal, and sympathetic nerves, which process and execute the abrupt contraction of the diaphragm. Unlike most reflexes, which often have a protective function (e.g., moving away from heat or pain), the functional purpose of hiccups is unknown. In spite of this, most people have had or will have hiccups at some point in their lives. Usually, hiccups are benign, or unconcerning, and self-limited. However, if a case of hiccups lasts continuously for more than a month, they may be a sign of serious underlying illness. 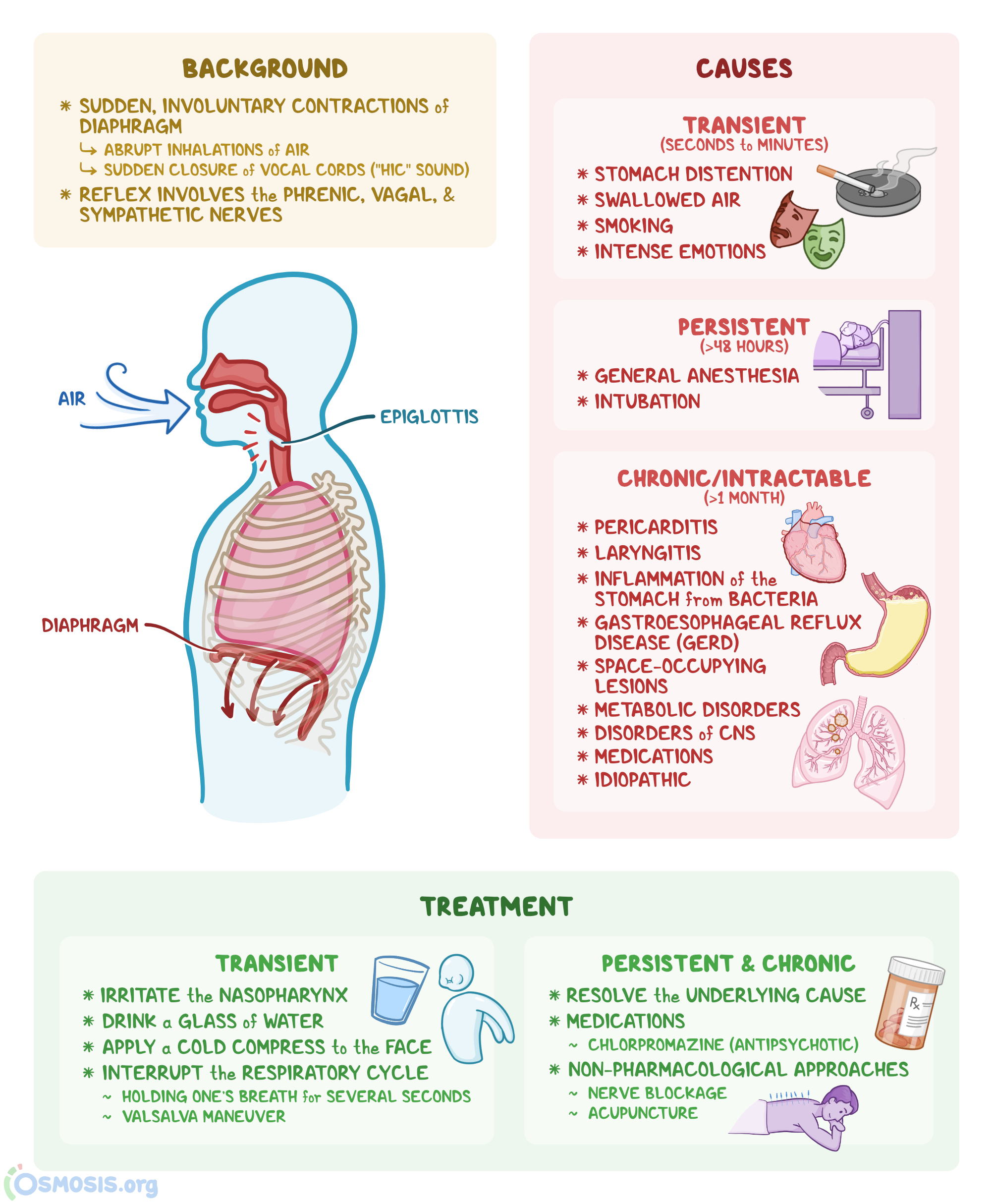 How long do hiccups last?

Hiccups can vary in duration depending on their classification. Transient hiccups are most common, lasting anywhere from a few seconds to several minutes. If hiccups last longer than 48 hours, they are known as persistent hiccups. In rare instances, episodes may last longer than 1 month, which are referred to as chronic or intractable hiccups.

A wide variety of factors can trigger hiccups. These triggers generally stimulate the peripheral ends of the hiccup reflex or act on its processing unit in the midbrain, resulting in the onset of hiccups. The cause of the hiccups impacts how long they last.

Distention, or stretching, of the stomach is the most common trigger of transient hiccups. A large meal, carbonated beverages, sudden changes in body temperature, and significant alcohol consumption can cause stomach distention. An individual may also develop transient hiccups because they have swallowed air, which may occur while chewing gum or talking while eating. In some cases, smoking and intense emotional factors, such as excitement or stress, have been associated with sudden onset of hiccups.

An individual may have persistent hiccups after undergoing general anesthesia during a surgical procedure. The administration of anesthesia typically requires the individual to extend their neck, which can stretch the phrenic nerves and trigger hiccups. Similarly, intubation, or the insertion of a tube into the individual’s airway to assist with breathing during anesthesia, may cause additional irritation that can stimulate hiccups.

Metabolic disorders -- such as diabetes, electrolyte imbalances (e.g., hypocalcemia, hypokalemia, etc.), and kidney disease -- may also induce intractable hiccups.  Less frequently, long-term hiccups may be due to disorders of the central nervous system. These disorders impact the brain and spinal cord and include stroke, brain tumors, traumatic brain injury, and inflammation of the brain (e.g., meningitis, encephalitis).

When medications, like steroids, barbiturates, and tranquilizers, stimulate the reflex arc, they may also trigger long-lasting hiccups. Moreover, anything that touches or irritates the tympanic membrane (i.e., eardrum) can trigger the vagus nerve.

Finally, some cases of chronic hiccups are idiopathic, meaning that their causes are undetermined.

How do you get rid of hiccups?

Most episodes of transient hiccups do not need intervention because they will resolve on their own. However, if they persist and are bothersome, there are ways to stimulate certain neural pathways that may stop a case of hiccups. For example, studies have shown that irritating the nasopharynx (i.e., the anatomical area around the nose and pharynx) with a catheter, by pulling out the tongue, or by lifting the uvula (i.e., the teardrop-shaped tissue hanging at the end of the soft palate) with a spoon may resolve hiccups. Eating 1 teaspoon of dry granulated sugar could also be effective. Similarly, stimulating the vagus nerve by drinking a glass of water or applying a cold compress to the face may help.

Interrupting the respiratory cycle is another approach that may stop transient hiccups. Holding one’s breath for several seconds or breathing into a paper bag are well-known ways to try to stop hiccups. A different method is the Valsalva maneuver, in which an individual strongly exhales while holding their mouth and nose closed. These maneuvers are generally effective for reducing the duration of transient hiccups, but they rarely resolve persistent or chronic hiccups.

Persistent and chronic hiccups generally require further investigation by a healthcare professional. While overall treatment typically focuses on resolving the underlying cause of the hiccups, additional treatments may be recommended to reduce symptomatic hiccups. Muscular or intravenous injection of chlorpromazine, an antipsychotic medication, has been found up to 80% effective at reducing the severity of hiccups. Other medications that can be administered to reduce the duration of hiccups include baclofen, a muscle relaxer; gabapentin, which is used to treat seizures; lidocaine, a local anesthetic; and benzodiazepines (e.g.,  lorazepam, diazepam), which are sedatives and slow down the body’s functions. Non-pharmacological approaches, such as nerve blockage and acupuncture, have also proven successful in some cases.

What are the most important facts to know about hiccups?

Hiccups refer to a sudden, involuntary contraction of the diaphragm that results in abrupt inhalations of air followed by a characteristic “hic” sound. Various causes have been identified, most of which include conditions that irritate or damage the phrenic and vagus nerves. Usually, hiccups last for a short period of time (i.e., transient hiccups) and are not concerning. Transient hiccups generally don't require further intervention, as they typically resolve on their own, but certain maneuvers may reduce their duration. Persistent hiccups, which continue for more than 2 days, and chronic hiccups, which last longer than 1 month, may need not only treatment to reduce the severity of the hiccups but also treatment of the underlying cause.

Anatomy of the Inferior mediastinum 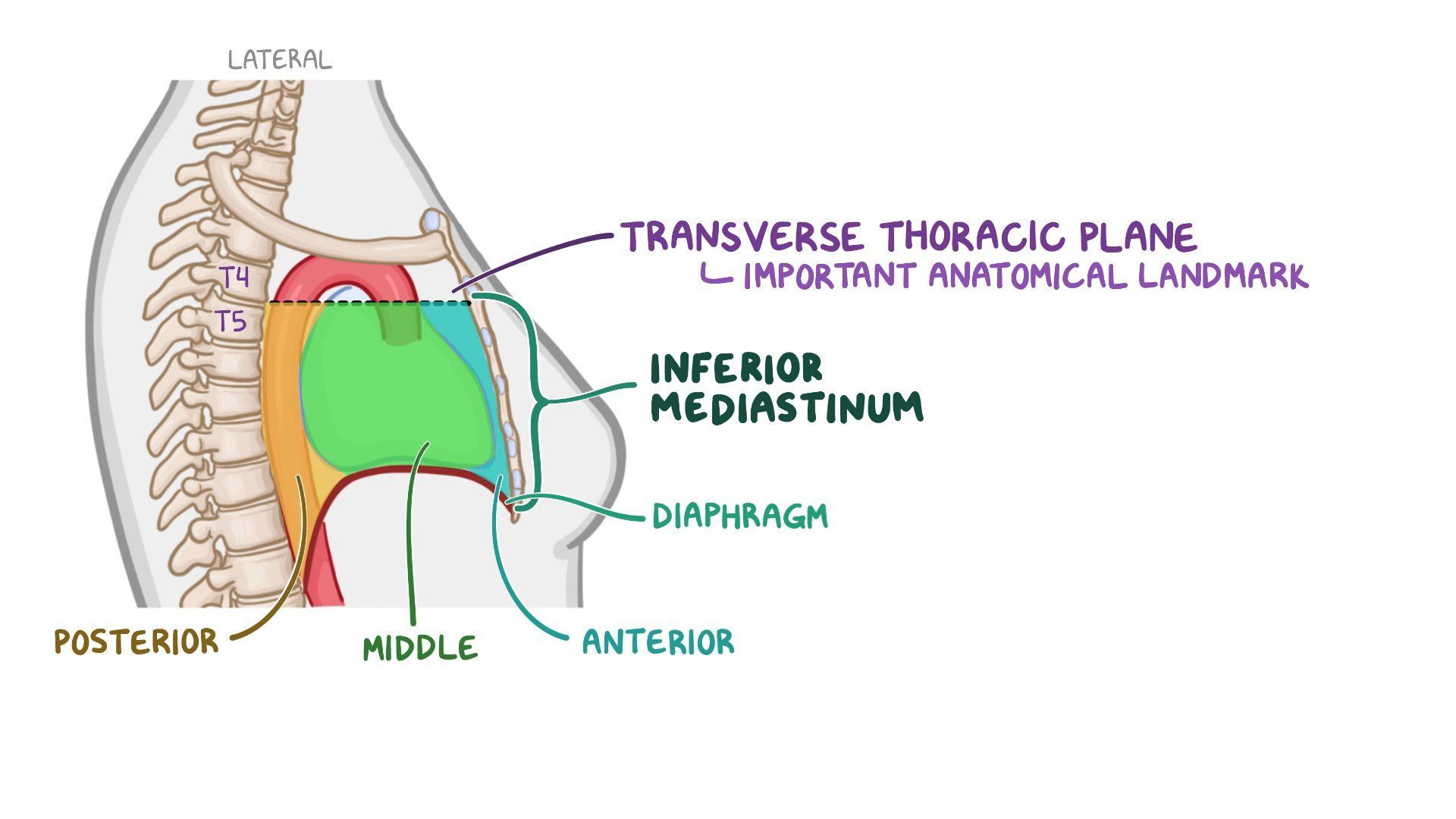 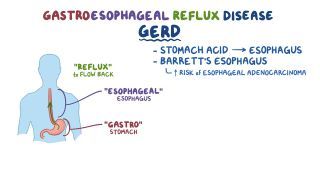 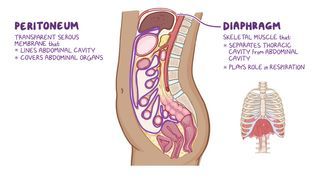 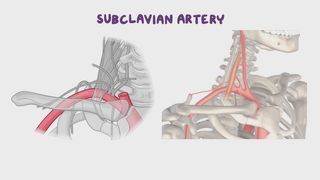