What Are They, Mechanism, and More

What are Kussmaul respirations?

Various organs work to maintain a consistent balance of acid in the body in order to ensure proper functioning. However, if this balance is disrupted and acid levels increase, Kussmaul respirations can occur. Kussmaul respirations may indicate a severe underlying condition that can be life-threatening, and medical attention should be sought immediately. 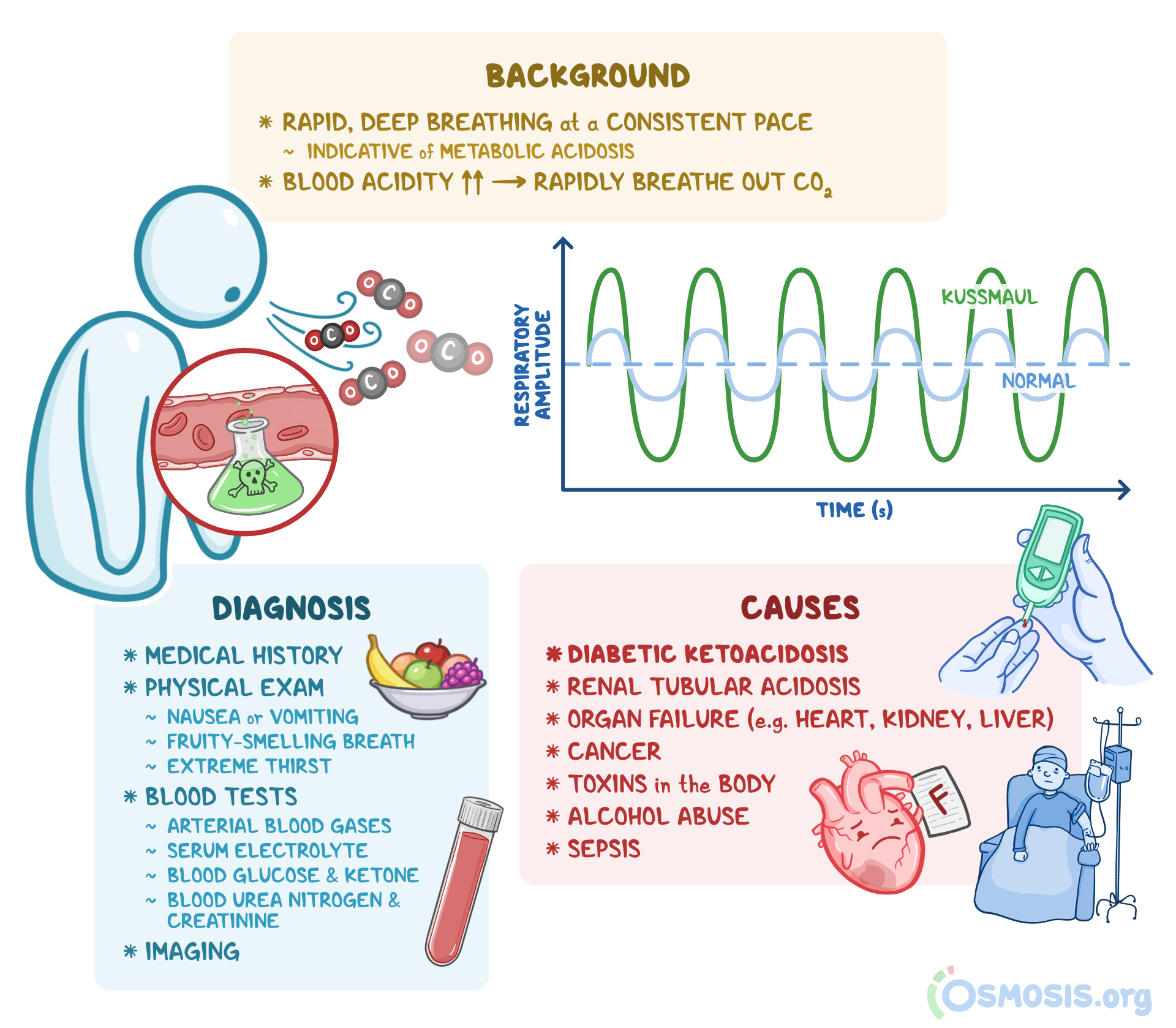 What is the mechanism that results in Kussmaul respirations?

Kussmaul respirations begin when acid levels in the body become too high, which is known as metabolic acidosis. The acidity level (pH) of the blood is normally in the range of 7.35 to 7.45 and is considered acidic when it drops below 7. When this drop occurs, the body works to expel the extra acid by rapidly breathing out carbon dioxide, one of the primary acids in the blood.

The most common cause of Kussmaul respirations is diabetic ketoacidosis, which can occur in individuals with diabetes mellitus. Diabetes mellitus is a disease in which the body has an inadequate insulin response, while insulin is a hormone that is essential for regulating blood-sugar levels and maintaining sufficient energy sources for the body. There are 2 types of diabetes: type 1, which is characterized by a lack of insulin production, and type 2, which is characterized by a resistance to insulin. In response to insufficient insulin levels, the body may use other compounds, such as fats and lipids, for energy. When broken down, these compounds produce acidic molecules called ketone bodies. A buildup of ketone bodies in the blood results in diabetic ketoacidosis, and such an increase in acidity may lead to Kussmaul respirations. Diabetic ketoacidosis commonly presents as a first sign of type 1 diabetes before the individual has been diagnosed. However, it can also occur in previously diagnosed individuals with type 1 diabetes, as well as in individuals with type 2 diabetes.

Kussmaul respirations may also result from renal tubular acidosis, when the kidneys are unable to excrete acid properly and subsequently cause an accumulation of acid in the blood. Renal tubular acidosis may be due to a variety of reasons, including inherited genetic conditions and autoimmune diseases, in which the immune system attacks healthy body tissue (e.g., Sjogren’s syndrome, rheumatoid arthritis). Renal tubular acidosis may also occur due to insufficient renal production of hormones, called primary adrenal insufficiency, or as a side effect of medications (e.g., anhydrase inhibitors).

Other causes of Kussmaul respirations include cancer, toxins in the body, alcohol misuse, sepsis, and failure of certain organs (e.g., heart, kidney, liver).

How do you diagnose Kussmaul respirations?

Kussmaul respirations are diagnosed through a medical evaluation of the individual’s symptom history, medical history, and physical examination. During the physical exam, a clinician may listen to the individual's lungs and check blood oxygen levels. Depending on the underlying cause, Kussmaul respirations will often be accompanied by other symptoms, such as nausea or vomiting. In cases of diabetic ketoacidosis, individuals often experience extreme thirst and have fruity-smelling breath.

Blood tests are often conducted to diagnose the underlying cause. The blood tests usually include arterial blood gases (ABGs) to measure acidity levels; serum electrolyte tests to assess for altered levels of electrolytes, like potassium and sodium; blood glucose and ketone levels to assess for diabetic ketoacidosis; and blood urea nitrogen (BUN) and creatinine levels to examine kidney function. Imaging, such as X-rays and computerized tomography (CT) scans, may also be performed to rule out lung infections (e.g., pneumonia) and diagnose renal tubular acidosis.

How do you treat Kussmaul respirations?

Treatment for Kussmaul respirations depends on the underlying cause. Regardless, hospitalization is often necessary. In general, metabolic acidosis is usually treated with intravenous (IV) fluids and electrolytes, depending on the deficiencies indicated in blood work. In cases of diabetic ketoacidosis, treatment involves administering intravenous insulin. For renal tubular acidosis, diuretics may be prescribed in order to remove salt and water from the body. In severe cases of metabolic acidosis, intravenous bicarbonate may be given to reduce blood acidity.

What are the most important facts to know about Kussmaul respirations?

Quiz yourself on Kussmaul Respirations 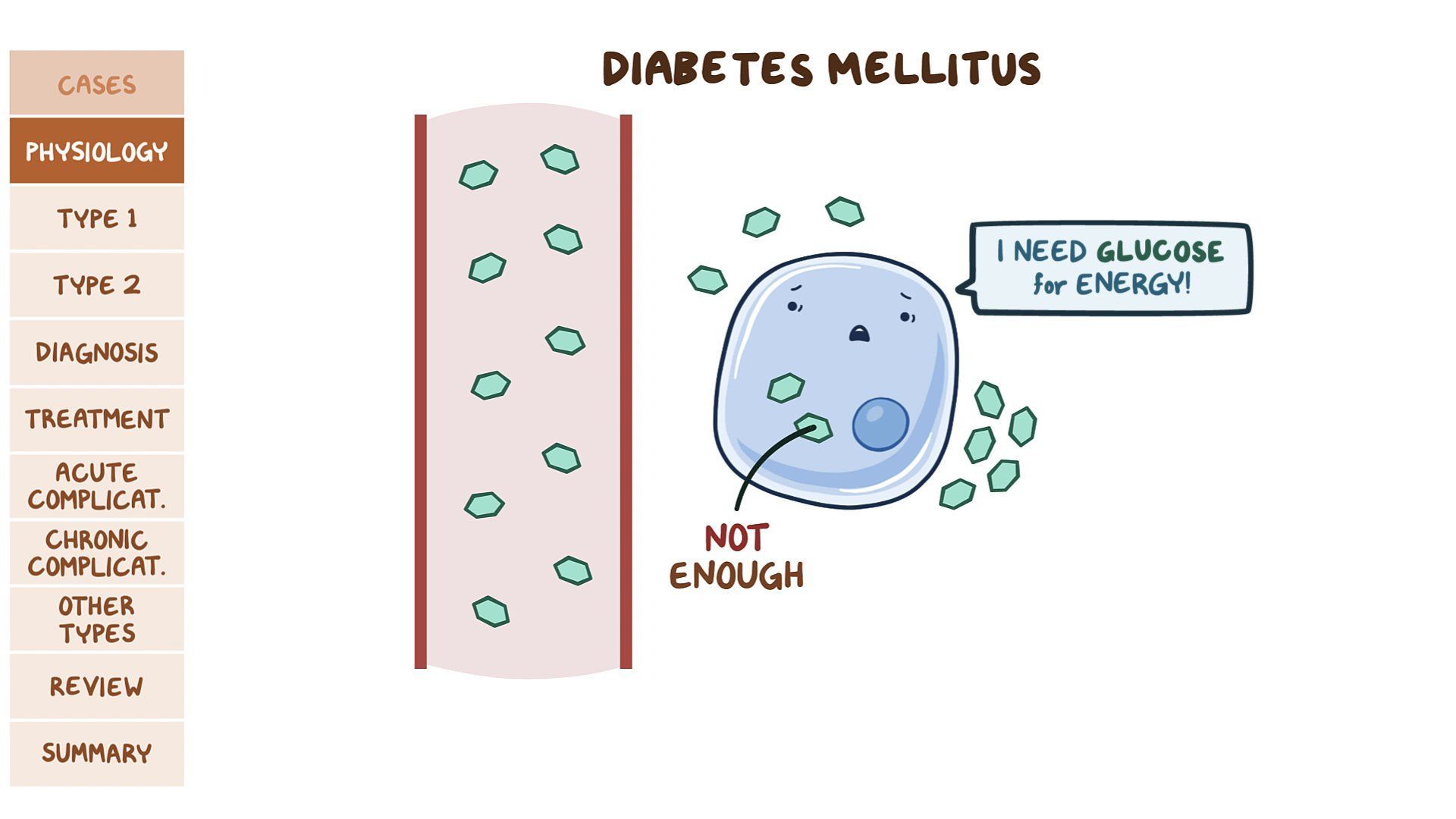 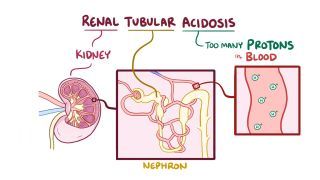 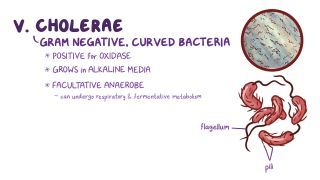 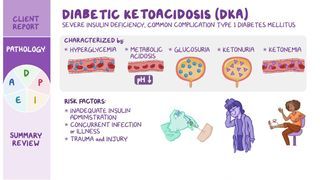