A 39-year-old female comes to the office because of sudden pain in her fingers and color changes of the skin of her fingers when she is cold for the past 4 weeks. She has noted that the skin on her face and fingers “feel like she is wearing a tight mask and gloves". She additionally reports that she seems to have developed some lesions on the tips of her fingers. She was recently diagnosed with CREST syndrome. Examination is shown below. Which of the following cell types is most attributable to causing the pathophysiologic changes associated with this disease process? 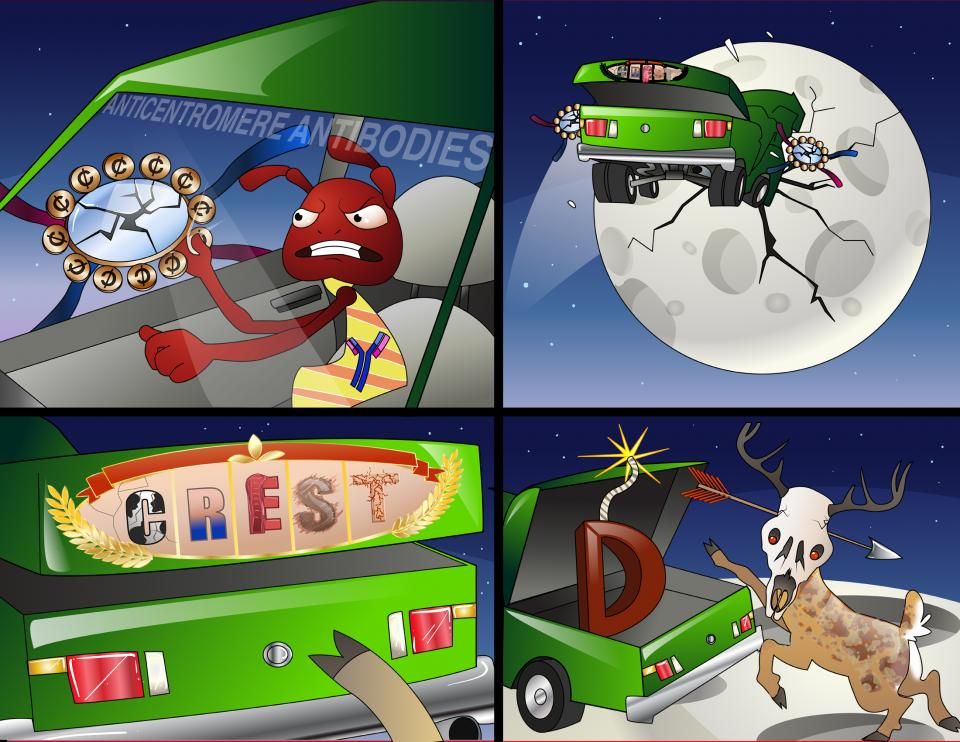 CREST syndrome, also known as limited cutaneous systemic sclerosis, is an autoimmune condition, and its name is an acronym that stands for calcinosis, Raynaud’s phenomenon, esophageal dysmotility, sclerodactyly, and telangiectasias.

Calcinosis is the deposition of calcium in the skin, Raynaud’s is spasm of the arteries in the fingers, esophageal dysmotility refers to difficulty swallowing, sclerodactyly is tightening of the skin over the fingers, and telangiectasias are small dilated blood vessels on the skin surface.

So, normally, when there’s an infection in the body, macrophages will eat some of the invading organisms and break them down.

When the naive T-cells bind to this presented antigen, they mature into T-helper cells, also called CD4+ T-cells, and go on to help and recruit more immune cells.

The T-helper cells release cytokines, which increase the activity of macrophages and attract nearby neutrophils.

They also release cytokines, like TGF-β, that tells fibroblasts to repair damaged tissue after the infection by laying down collagen.

The cause of CREST syndrome isn’t known exactly, but individuals in the first two years of the disease have a higher than normal number of T-helper cells in the skin on their hands and face, particularly near small blood vessels.

The T-helper cells release cytokines to attract other immune cells, like macrophages and neutrophils, which cause a lot of inflammation in the skin.

There is so much inflammation that the tissue dies, in a process called necrosis.

When the cells die, calcium in the cytosol binds to fragments of cell membrane and builds up in the skin, which is called calcinosis.

It’s not clear why it happens, but individuals with CREST often experience Raynaud’s phenomenon, which is an episodic, dramatic vasoconstriction of arterial blood vessels in the hands.

It’s not quite clear what is going on, but in CREST syndrome there is often difficulty in swallowing food, which we esophageal dysmotility.

The inflammation in the skin, also damages the blood vessels, which eventually results in poor blood flow, called ischemia.

This causes more damage to the skin, particularly in the hands and fingers.

The severe ischemia and tight skin in the fingers can cause ischemic ulcers and even finger loss if left untreated.

The body tries to repair the damage by activating fibroblasts which lay down bundles of collagen.