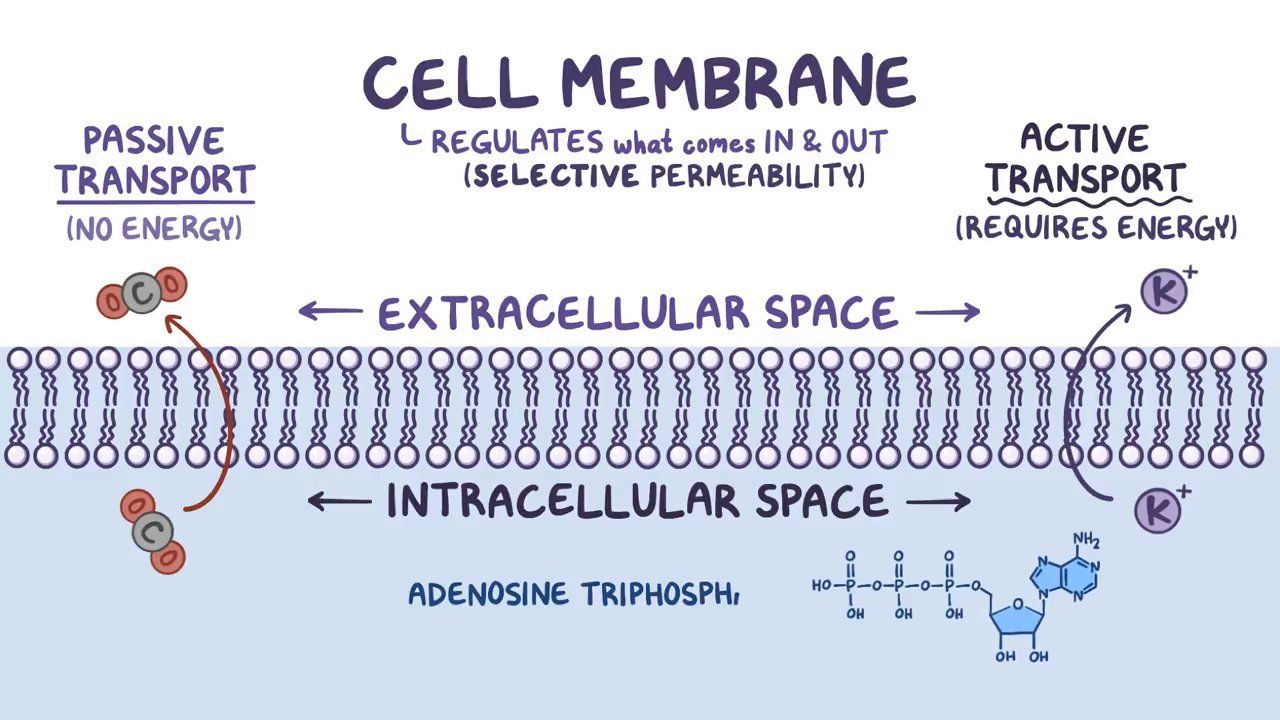 A 52-year-old man comes to the clinic to discuss his poorly controlled type 2 diabetes mellitus. His past medical history also includes hypercholesterolemia and peripheral vascular disease. His medications include metformin and lovastatin. His temperature is 37°C (98.6°F), pulse is 72/min, respirations are 14/min, and blood pressure is 136/78 mm Hg. Examination shows no abnormalities. He is started on a medication that blocks the reabsorption of glucose in the proximal convoluted tubule. This medication inhibits which of the following methods of transport across the cell membrane?

And it helps regulate what comes in or out of the cell, which is called selective permeability.

There are three types of passive transport - diffusion, facilitated diffusion, and osmosis.

Diffusion helps small, non-polar molecules, like oxygen and carbon dioxide, move across the membrane, from an area of high concentration to low concentration.

The difference in concentrations is known as the concentration gradient, and diffusion can occur as long as this gradient exists, and stops once there are equal concentrations of the molecule on both sides.

Channels are not very specific, and they can open or close to allow water and small polar molecules, like ions, that are dissolved in it to pass through.

These channels open in response to certain stimuli - for example, the voltage gated calcium channels respond when the electrical charges on the two sides of the cell membrane change.

Normally, there are more negative ions inside the cell than outside, so the inside of the cell membrane is negatively charged, and the outside is positively charged.

When positive ions make their way inside the cell through one form of transport or another, the cell starts to depolarize gradually - so step by step, the membrane becomes more positive on the inside, and more negative on the outside.

This change in the distribution of electrical charges makes the voltage gated calcium channels open and allow water, a lot of calcium ions, and a few sodium ions inside the cell.

When the entire membrane is depolarized, the channels close back up and inflow stops.

In contrast, carrier proteins are very specific - they have special binding sites that only allow certain molecules to bind to them, and they also have gates at both ends, which open sequentially.

An example of a carrier protein is the glucose transporter protein called GLUT4.

By default, the transporter is open to the outside, waiting for a glucose molecule to float by.

When a glucose molecule binds to a special site within the transporter, the outer gate closes, and the inner gate opens.

The glucose then unbinds, and floats freely into the cell, while the transporter will reset, awaiting for the next glucose molecule.

Since glucose is moving down its concentration gradient, this requires no energy!

Finally, there’s osmosis which - in addition to being an awesome company that explains medical topics really clearly - also describes the movement of water across the cell membrane.