A 7-year-old boy comes to the emergency department with confusion, difficulty speaking, and generalized seizures. His mother has also noticed that his skin has become darker than usual over the last few months. Laboratory studies show an increased concentration of very long-chain fatty acids. Which of the following conditions is most likely to be seen associated with the most likely diagnosis? 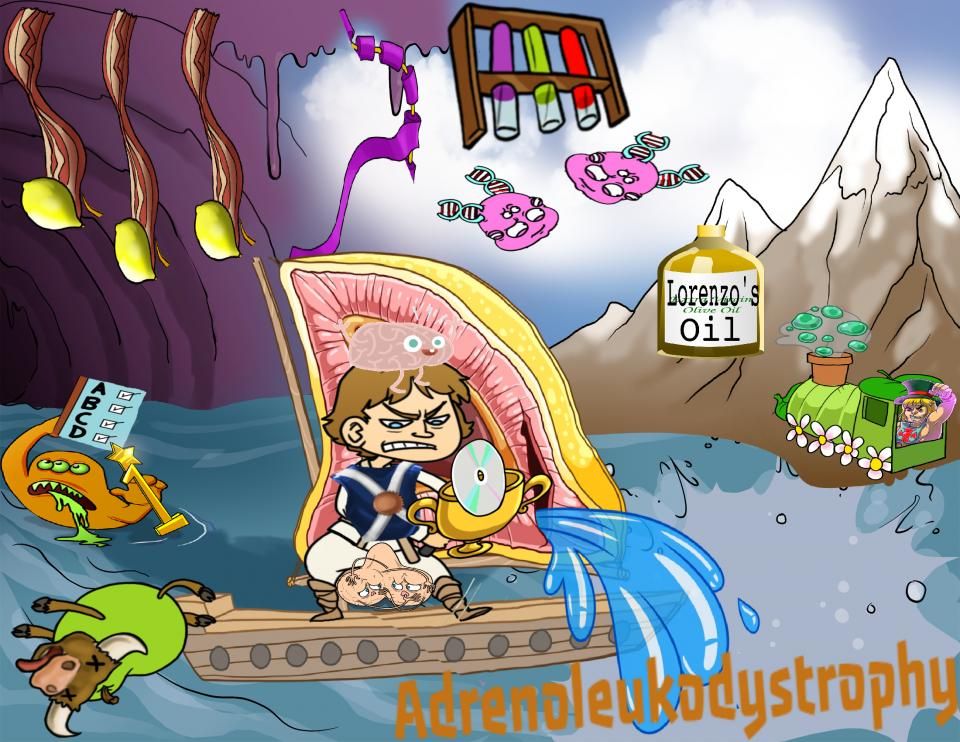 With adrenoleukodystrophy, sometimes called ALD, adreno- refers to the adrenal glands, while -leuko-, means white, and -dystrophy refers to tissue degradation. So, adrenoleukodystrophy is a rare genetic condition, caused by a mutation in the ABCD1 gene, located in the X-chromosome, that leads to the progressive loss of white matter in the nervous system, and the degradation of adrenal glands. Generally, genes tell our bodies how to make proteins. In this case, the ABCD1 gene directs the body to produce adrenoleukodystrophy protein or ALD protein. ALD protein is a transporter that is found embedded in the membranes of vesicles found in cells that break down specific forms of fatty acids, called peroxisomes. Its function is to import into peroxisomes, a group of fats, naturally present in the human body and in our diets, called very long-chain fatty acids or VLCFAs.

Once inside the peroxisomes, these molecules are broken down into shorter forms of fatty acids. Now, in adrenoleukodystrophy, there’s a mutation in the ABCD1 gene which leads to a defective ALD protein. Without a working ALD protein, VLCFAs have no way of entering the peroxisomes to be broken down, so they accumulate inside cells. This build up of VLCFAs is thought to be damaging to our nerve cells and the glial cells that support them, the cells in our adrenal glands that produce steroid hormones, the cells in the testicles, and some of our immune cells. Adrenoleukodystrophy is inherited in an X-linked fashion. This means that the ABCD1 gene is found on the X-chromosome. Males who carry a ABCD1 gene mutation on their X chromosome will have the condition. 85% of females who carry a ABCD1 gene mutation on one of their X chromosomes present higher levels of VLCFAs and half experience symptoms.

Now, adrenoleukodystrophy has variable expressivity, which means that the symptoms between each person with the condition can differ greatly, even within the same family. For this reason, an affected person can develop four main types of adrenoleukodystrophy. The four main types are the childhood cerebral type, called ccALD, the adult cerebral type, called acALD, the adrenomyeloneuropathy or AMN type, and adrenal insufficiency-only type. It’s important to note that in the cerebral forms of ALD, there is a rapidly progressive inflammation of the brain resulting in destruction of the brain’s white matter, the AMN type is due to a slowly progressive degeneration of the long nerve fibers in the spinal cord and the peripheral nerves. Despite extensive research it remains unknown why some people develop one versus the other form of the disease. Currently, there is also no way to predict who will develop which form.

In the childhood cerebral type, the affected children develop normally for the first few years but neurological symptoms typically begin in early school years. These symptoms might include new onset behavioral problems, learning disabilities, seizures, vision loss, deafness, loss of speech, and trouble coordinating movements. In the adrenomyeloneuropathy type, the most common form, there are both adrenal and neurological problems. It usually starts in early adulthood. Symptoms may include stiffness, weakness, clumsiness in the limbs, pain in the hands and feet, muscle spasms, urinary problems, and erectile dysfunction. In the adult cerebral type, men who often already have AMN symptoms will also start experiencing behavioral changes, memory and cognitive issues, similar to people with dementia, slurring of speech, and inability to take care of themselves.