Swyer syndrome, also known as 46, XY complete (pure) gonadal dysgenesis (CGD), is a rare congenital disorder of sex development. It is characterized by the failed development of the sex glands (i.e. testicles or ovaries). Usually, the human genotype is made up of 46 chromosomes: 22 pairs that make up the autosomal chromosomes and a 23rd pair of sex chromosomes which determine the assigned sex of a newborn. If the sex chromosomes have an XX genetic makeup, they usually lead to the development of a vagina, uterus, and Fallopian tubes; an XY genetic makeup, on the other hand, usually leads to the development of a penis and scrotum. People with Swyer syndrome, however, have an XY genetic makeup, or genotype, but develop a vagina, uterus, and Fallopian tubes instead of a penis and scrotum. This is referred to as a sex reversal, which is also evident in their overall physical appearance, also refered to as phenotype, resulting in unambiguous female external genitalia. 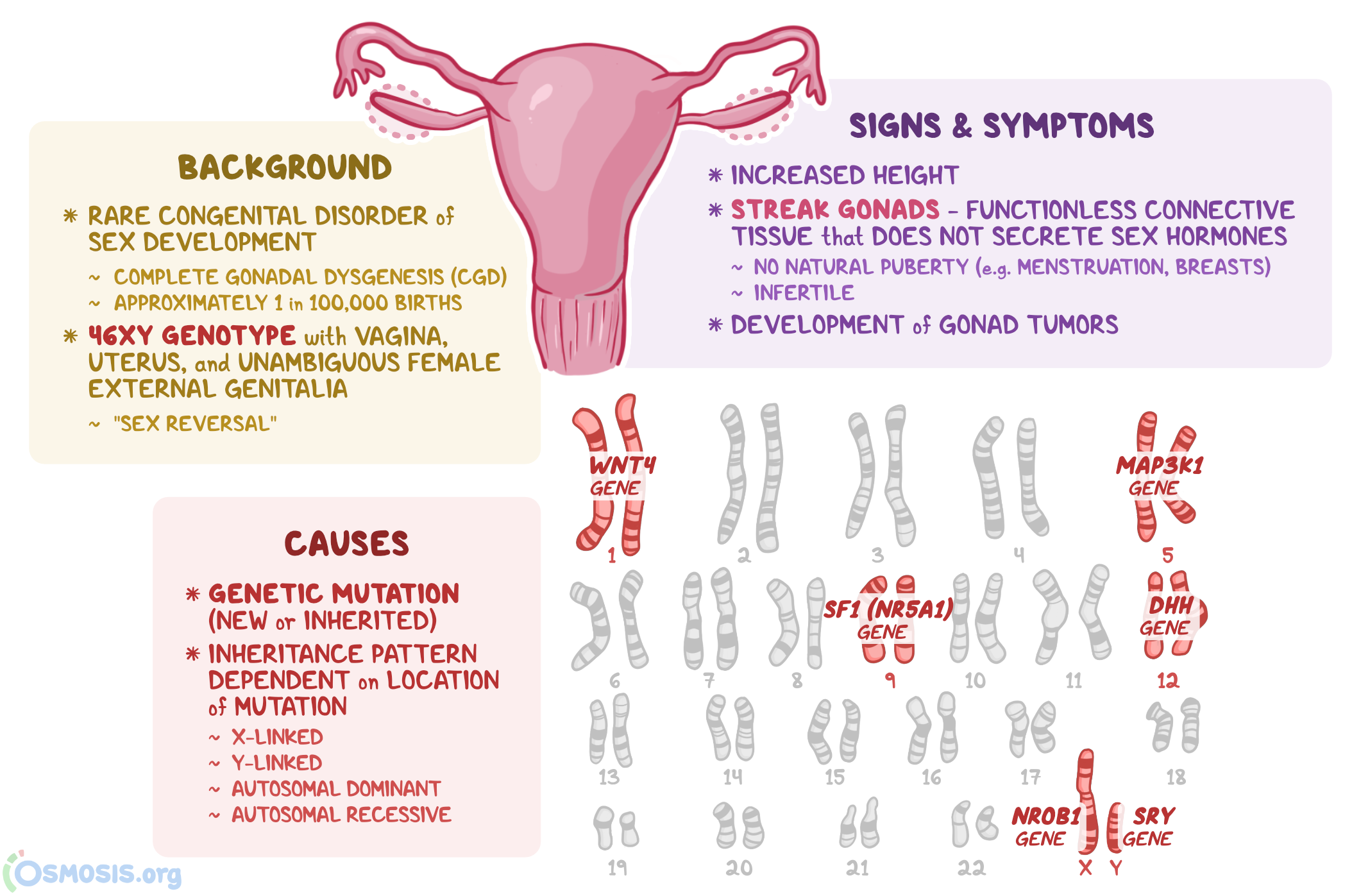 Between 15–20% of individuals with Swyer syndrome have mutations in the sex-determining region Y (SRY) gene, which is located on the short arm of the Y chromosome. Mutations of the SRY gene often inhibit the formation or functioning of the SRY protein, also called testis-determining factor (TDF), which typically stimulates the development of the testes. Without functional SRY proteins, individuals often develop a vagina, uterus, and Fallopian tubes.

How is Swyer syndrome inherited?

Swyer syndrome can be inherited in a X-linked, Y-linked, autosomal dominant, or autosomal recessive manner, depending on the underlying mutation that results in the complete, or pure, gonadal dysgenesis.

How common is Swyer syndrome?

How does Swyer syndrome affect the reproductive system?

In addition, younger individuals with Swyer syndrome typically do not undergo puberty because the lack of ovaries results in an inability to produce sex hormones, such as estrogen and progesterone, which are required for puberty. However, in cases of early diagnosis, often directed by signs of delayed puberty, such as the absence of menstrual cycles by the age of 14 (i.e. primary amenorrhea), individuals with Swyer syndrome can be treated with hormone therapy and eventually undergo puberty.

Swyer syndrome also increases the risk of developing gonadal tumors in late adulthood, which can progress to invasive carcinomas of the streak gonads. If left untreated, tumors of the gonads can affect the reproductive system by increasing in size or by spreading cancerous cells to other abdominal organs.

How is Swyer syndrome diagnosed?

Although affected individuals are born with Swyer syndrome, diagnosis rarely occurs at birth. Most cases of this syndrome are diagnosed in their teens, when tested for delayed puberty and amenorrhea. The diagnosis of Swyer syndrome is made based upon a thorough medical history, clinical evaluation, identification of characteristic findings (e.g. no menstruation, streak gonads), and a variety of tests.

An individual’s physical appearance may also lend to a particular diagnosis. A differentiating feature of individuals with Swyer syndrome is their increased height during puberty and their lack of secondary XX-related characteristics, such as menstrual cycles, enlarged breasts, as well as pubic and axillary hair.

Oftentimes, imaging is suggested in order to identify the internal genital organs of the reproductive system. Initially, an ultrasound is usually performed. Magnetic resonance imaging (MRI) can also be performed if the ultrasound findings are concerning or unclear. For further investigation, diagnostic laparoscopy can be performed, which is a minimally invasive surgical procedure that provides a clear view of the abdominal organs through a few small incisions.

Chromosomal analysis is often mandatory in order to confirm diagnosis of Swyer syndrome. A specific procedure that requires the identification of each chromosome, called fluorescent in situ hybridization, (FISH) can be used to determine their 46XY karyotype, that visually represents the human’s chromosomal makeup. Additional genetic analysis may be performed in order to identify the specific gene mutations associated with Swyer syndrome.

How is Swyer syndrome treated?

The treatment of Swyer syndrome primarily focuses on managing associated characteristics of the condition through hormone therapy. Additionally, preventive measures may also be taken in order to prevent the development of cancer.

Swyer syndrome is treated with hormonal replacement therapy, including the replacement of estrogen and progesterone, the two main hormones that are produced by the ovaries. When possible, this therapy usually begins at the ages associated with puberty, specifically during adolescence in order to induce menstruation and the development of secondary XX-related characteristics, such as breast enlargement, and body hair. Hormone replacement therapy can also help prevent bone loss and thinning (i.e. osteoporosis) later during life, as estrogens play an important role in the growth and maturation of the bones.

In order to mitigate the risk of cancer, streak gonads are often removed surgically to avoid a gonadal malignancy.

What are the most important facts to know about Swyer syndrome?

Swyer syndrome, also known as complete gonadal dysgenesis (CGD), is a rare congenital disorder of sex development. People with Swyer syndrome have a 46 XY karyotype that is not consistent with their phenotype, including their genitalia which are unambiguously female. Even though the causes of this syndrome are mostly unknown, it is certain that mutations in the SRY gene, among other gene mutations, could lead to complete gonadal dysgenesis. Swyer syndrome can occur as a result of a new gene mutation or can be inherited in an autosomal dominant, autosomal recessive, X-linked, or Y-linked manner. People with Swyer syndrome have a vagina, uterus, and Fallopian tubes, however, their ovaries are completely undeveloped and instead, consist of fibrous tissue known as streak gonads. Consequently, they do not produce sex hormones (estrogen and progesterone), and do not develop the secondary XX-related characteristics, do not undergo puberty, and are infertile. The diagnosis includes clinical evaluation but is confirmed by a karyotype analysis. Treatment includes hormone replacement therapy and close monitoring of the streak gonads as they may have to be removed surgically due to increased risk of developing a gonadal tumor.

Quiz yourself on Swyer Syndrome 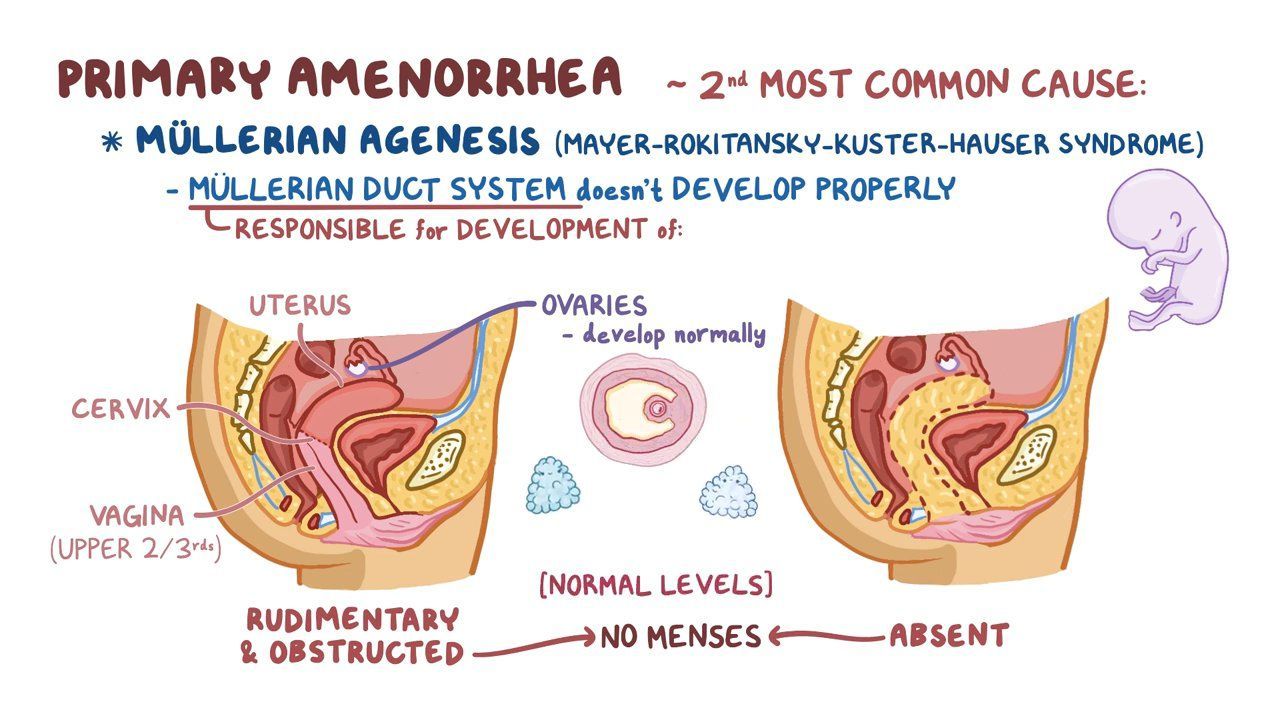 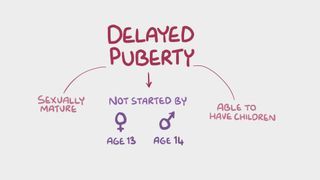 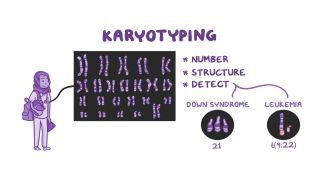 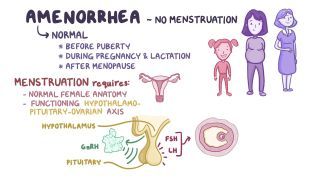