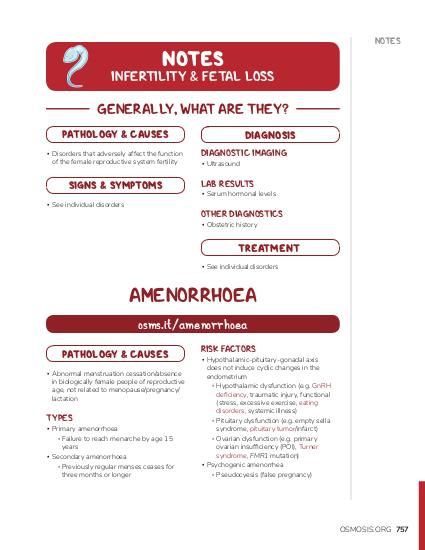 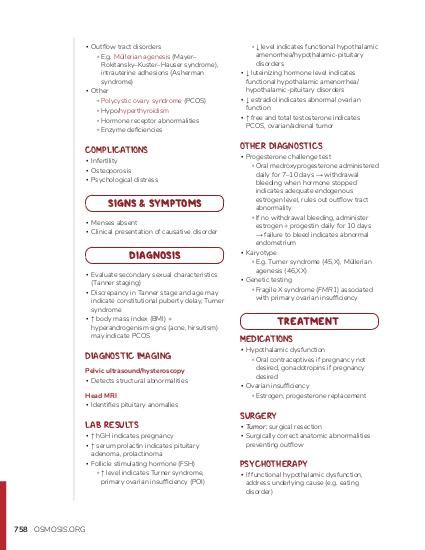 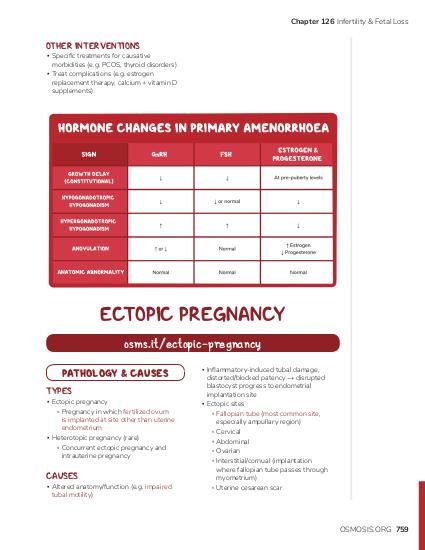 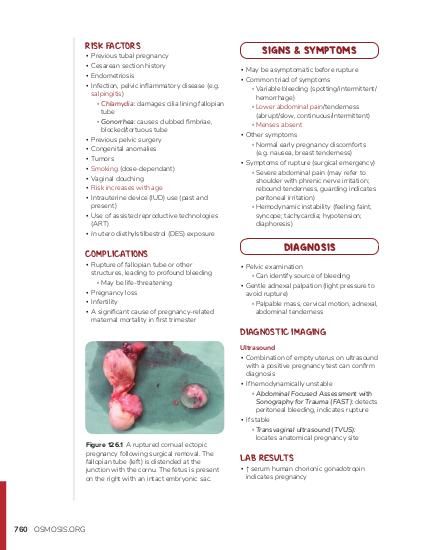 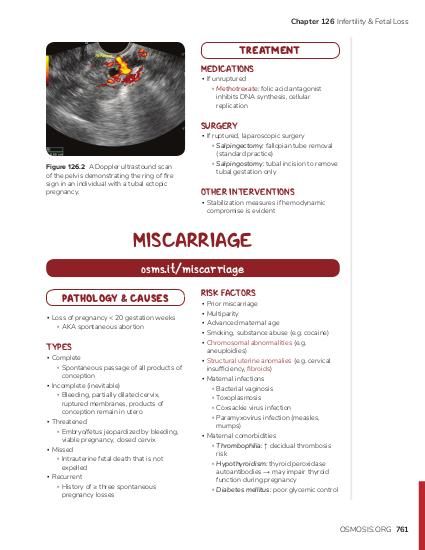 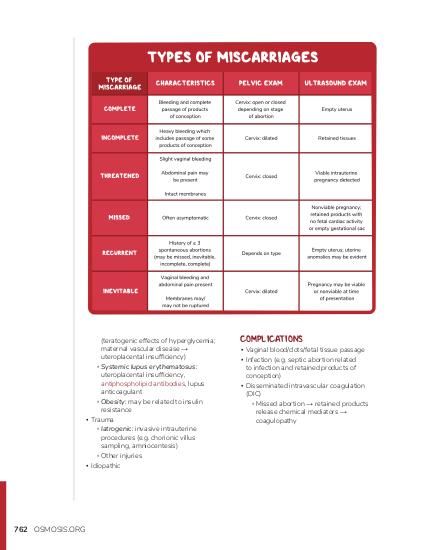 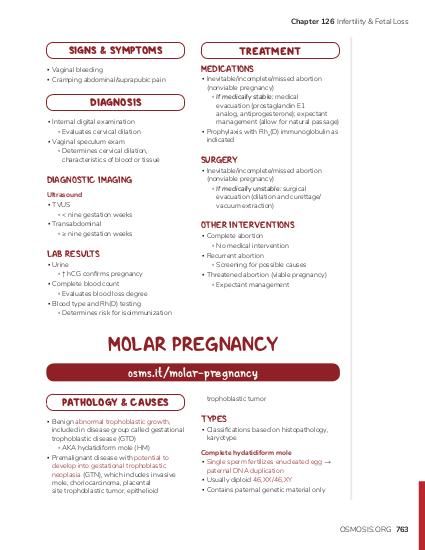 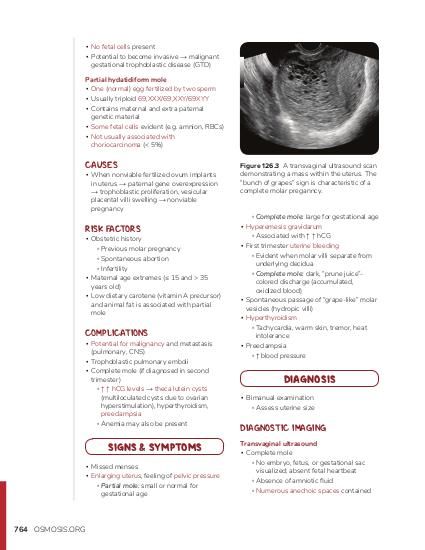 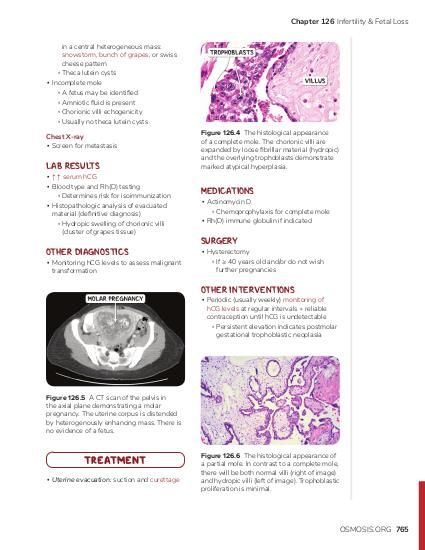 A 25-year-old woman comes to your clinic because she has not had her period for 8 months. She is a college athlete, denies any weight changes, denies sexual activity, and says her period has been normal since it began at age 13. She is 5'6" and weighs 40.8-kg (90-lb). A pregnancy test is negative. What is the most likely cause of her amenorrhea?

It’s normal before puberty, during pregnancy and lactation, and after menopause.

Now, menstruation, and the menstrual cycle as a whole are controlled by the hypothalamus and the pituitary gland, all the way up in the brain.

In the first two weeks of a normal 28-day cycle, the ovaries go through the follicular phase, meaning that out of the many follicles scattered throughout the ovaries, a couple of them enter a race to become the dominant follicle, that will be released at ovulation.

All the developing follicles secrete loads of estrogen, which negatively inhibits pituitary FSH.

In the meantime, the uterus goes through two phases: the menstrual and proliferative phase.

During the menstrual phase, the functional layer of the endometrium is shed and eliminated through the vagina, leading to menstruation, which lasts an average of five days.

It’s followed by the proliferative phase, during which the rising levels of ovarian estrogen make the functional layer of the endometrium thicken and sprout endometrial glands.

After ovulation, the ovaries enter the luteal phase, which lasts for the two weeks following ovulation.

Progesterone makes the endometrium go through the secretory phase, during which it thickens some more, and spiral arteries continue to grow.

If the egg is not fertilized by a sperm, estrogen and progesterone levels slowly decrease.

When progesterone reaches its lowest level, the spiral arteries collapse, and the functional layer dies off and is eliminated through menstruation, which marks the beginning of a new menstrual cycle.

Ok, now, coming back to amenorrhea. Primary amenorrhea is when a female hasn’t had her first menstruation, called menarche, by age 16, despite normal growth and having started puberty.

Primary amenorrhea is also suspected when a female hasn’t had menarche by age 13 and doesn’t show signs of puberty, which include developing secondary sexual characteristics like breasts.

The most common cause of primary amenorrhea is Turner syndrome, where one X chromosome is either completely or partially absent.

The most common karyotype is 45, X, which means the person has 45 chromosomes, of which only one is an X chromosome.

With Turner syndrome, the ovaries are replaced by streak gonads, or functionless, fibrous tissue.

This happens because the missing X chromosome leads to accelerated ovarian follicle depletion, so that by two years old, none are left, essentially causing “menopause before menarche”.

No ovarian follicles also means no estrogen and progesterone, which leads to high levels of FSH and LH.

The second most common cause of primary amenorrhea is Müllerian agenesis, which is also called Mayer-Rokitansky-Kuster-Hauser syndrome.

In this case, the Müllerian duct system doesn’t develop properly in a biologically female fetus.

The Müllerian duct system is responsible for the development of the uterus, cervix and upper two thirds of the vagina, so these organs may be absent, or rudimentary and obstructed, which explains the absence of menses.

But the ovaries develop normally in these individuals, and the ovarian follicles make normal amounts of estrogen and progesterone, so there are normal levels of FSH and LH.

A rarer cause of primary amenorrhea is androgen insensitivity syndrome.

In this case, the individual is biologically male, which means they have a 46, XY karyotype, but their androgen receptors don’t respond to testosterone.

So they don’t have a uterus, fallopian tubes or ovaries, which explains the absence of menses.

But they have testicles, which are usually in the abdomen or the inguinal canal, and they make the normal amount of testosterone for a biologically male individual, so FSH and LH levels are normal.

Some of that testosterone gets converted to estrogen, so these people have female external genitalia and female secondary sex characteristics.

These include Kallmann syndrome, where GnRH producing neurons fail to migrate from the nose region to the hypothalamus during fetal development.

This causes low levels of GnRH, FSH, and LH, and, as a consequence, low estrogen, so puberty either never starts or is incomplete.

Ok, now let’s switch gears at look at causes of secondary amenorrhea, which is defined as no menstrual bleeding for at least three normal menstrual cycles in a female who previously had regular cycles, or for six months for females who used to have irregular cycles.

There are many causes of secondary amenorrhea, and when they occur before menarche, all of these can also cause primary amenorrhea.

The most common cause of secondary amenorrhea is pregnancy.

Next, there’s functional hypothalamic amenorrhea, which is when there is a decrease in GnRH secretion, leading to low levels of LH, FSH, and estrogen.

Often, this is due to weight loss from anorexia, nutritional deficiencies like excessively low fat consumption, prolonged periods of strenuous exercise, or severe physical or emotional stress.