A 24-year-old sexually active woman with regular 29-day menstrual cycles presents to the clinic complaining that her period is two weeks late. Physical exam reveals no abnormalities. Pregnancy is confirmed by urine test. Which of the following mechanisms is most likely responsible for her missed period? 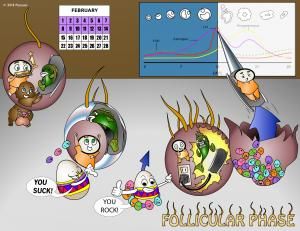 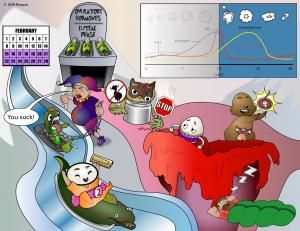 The menstrual cycle refers to the regular changes in the activity of the ovaries and the endometrium that make reproduction possible.

The endometrium is the layer of tissue lining the inside of the uterus.

This lining consists of a functional layer, which is subject to hormonal changes and is shed during menstruation, and a thin basal layer which feeds the overlying functional layer.

Menarche, which refers to the onset of the first menstrual period, usually occurs during early adolescence as part of puberty.

Following menarche, the menstrual cycle recurs on a monthly basis, pausing only during pregnancy, until a person reaches menopause, when her ovarian function declines and she stops having menstrual periods.

During these two phases, the ovaries and the endometrium each undergo their own set of changes, which are separate but related.

For the ovary, the two weeks leading up to ovulation is called the ovarian follicular phase, and this corresponds to the menstrual and proliferative phases of the endometrium.

Similarly, the two weeks following ovulation is referred to as the ovarian luteal phase, which also corresponds to the secretory phase of the endometrium.

So, let’s first focus on the preovulatory period, starting with the ovarian follicular phase.

This phase starts on the first day of menstruation and represents weeks one and two of a four-week cycle.

The whole menstrual cycle is controlled by the hypothalamus and the pituitary gland, which are like the masterminds of reproduction.

The hypothalamus is a part of the brain that secretes gonadotropin-releasing hormone, or GnRH, which causes the nearby anterior pituitary gland to release follicle stimulating hormone, or FSH, and luteinizing hormone, or LH.

The frequency and magnitude of the gonadotropin-releasing hormone pulses determine how much follicle stimulating hormone and luteinizing hormone will be produced by the pituitary.

These pituitary hormones control the maturation of the ovarian follicles, each of which is initially made up of an immature sex cell, or primary oocyte, surrounded by layers of theca and granulosa cells, the hormone-secreting cells of the ovary.

Over the course of the follicular phase, these oocyte-containing groups of cells, or follicles, grow and compete for a chance at ovulation.

During the first ten days, theca cells develop receptors and bind luteinizing hormone, and in response secrete large amounts of the hormone androstenedione, an androgen hormone.

Aromatase converts androstenedione from the theca cells into 17β-estradiol, which is a member of the estrogen family.

As the follicles grow and estrogen is released into the bloodstream, increased estrogen levels act as a negative feedback signal, telling the pituitary to secrete less follicle stimulating hormone.

As a result of decreased follicle stimulating hormone production, some of the developing follicles in the ovary will stop growing, regress and die off.

The follicle that has the most follicle stimulating hormone receptors, however, will continue to grow, becoming the dominant follicle that will eventually undergo ovulation.

This dominant follicle continues to secrete estrogen, and the rising estrogen levels make the pituitary more responsive to the pulsatile action of gonadotropin-releasing hormone from the hypothalamus.

As blood estrogen levels start to steadily climb higher and higher, the estrogen from the dominant follicle now becomes a positive feedback signal – that is, it makes the pituitary secrete a whole lot of follicle stimulating hormone and luteinizing hormone in response to gonadotropin-releasing hormone.

This surge of follicle stimulating hormone and luteinizing hormone usually happens a day or two before ovulation and is responsible for stimulating the rupture of the ovarian follicle and the release of the oocyte.