What Is It, Types, Causes, Diagnosis, Treatment, and More

What is an ileus?

An ileus is the temporary slowing of digestive tract mobility which can lead to a buildup and blockage in the digestive tract. The smooth muscle of the digestive tract moves in a series of waves called peristalsis, pushing the contents of food or drink from the esophagus through the large intestine. Disruptions in peristalsis can occur anywhere throughout the digestive tract and can range from acute to chronic. Severe acute peristaltic disruptions, also known as paralytic ileus, can lead to a functional intestinal obstruction in which the muscles fail to contract and can cause a buildup of gas and other liquid or solid contents. Chronic severe peristaltic disruptions are known as a pseudo-obstruction and result from chronic neuromuscular problems. Pseudo-obstructions can lead to persistent life-threatening functional intestinal obstructions.

Unlike an ileus, a mechanical intestinal obstruction results from the physical blockage of the intestines. It is often a complete obstruction and is typically the result of conditions that cause sliding (intussusception) or twisting (volvulus) of the intestines onto itself, ultimately cutting off blood vessels and causing tissue death. Other physical blockages in the digestive tract include masses, such as tumors, hernias or gallstones, as well as postoperative adhesions that can form while healing. 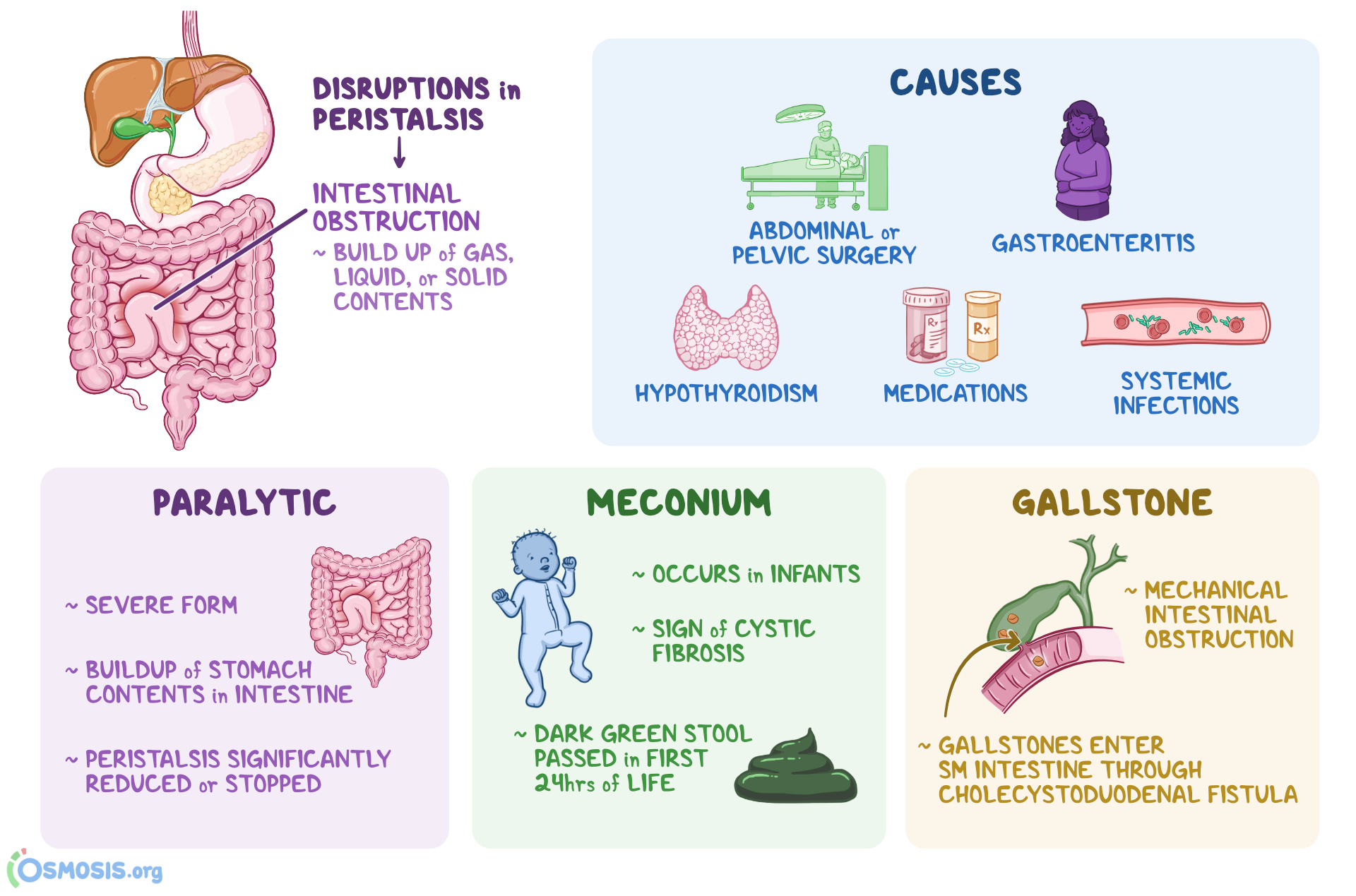 What is paralytic ileus?

Paralytic ileus is a severe form of ileus that occurs when peristalsis has been significantly reduced or stopped, leading to a buildup of stomach contents in part of the intestine. Risk factors for paralytic ileus include abdominal surgery and infection or inflammation of various parts of the digestive tract, such as the stomach or intestines (e.g. gastroenteritis), pouches in the intestines (e.g. diverticulitis), or the pancreas (e.g. pancreatitis).

What is meconium ileus?

Meconium ileus is a severe form of ileus that occurs in infants and may be a sign of cystic fibrosis, which is a genetic condition affecting the lungs and digestive systems. Meconium refers to a dark green stool passed within the first 24 hours of life by a newborn. It can become abnormally thick and sticky, especially in those with cystic fibrosis. The thick meconium can then cling to the intestinal wall, impeding its movement through the digestive tract, and eventually causing meconium to build up and block the last part of the small intestine.

What is gallstone ileus?

More accurately referred to as a mechanical intestinal obstruction, gallstone ileus occurs due to the physical blockage of the small intestine by a gallstone. Large gallstones can enter the small intestine through an opening that forms between the gallbladder and intestinal wall, known as a cholecystoduodenal fistula. Gallstone ileus is a rare complication of cholelithiasis (the formation of gallstones) and those at higher risk include older adults with comorbid conditions like diabetes, chronic lung disease, or heart failure.

What causes an ileus?

Conditions that impair digestive peristalsis can lead to an ileus. The digestive tract consists of many nerve cells and smooth muscle fibers that control peristalsis; damage to these components can occur under various conditions. The most common cause of an ileus is abdominal or pelvic surgery which activates a stress response that immobilizes the digestive tract. Typically, it takes about 24 to 72 hours for the digestive tract to resume normal function, though certain factors—such as longer surgical operation time and open surgical procedures—can increase the duration of the ileus.

Certain medications can also slow peristalsis; for instance, anesthetics, opioids, chemotherapy agents, psychotropic agents (such as those used for depression and anxiety), and anticholinergic agents (used for urinary incontinence and Parkinson’s disease). Systemic inflammation and severe pain requiring prolonged opioid use can often lead to an ileus. Other causes include infections within the abdomen like gastroenteritis, systemic infections such as sepsis, and metabolic abnormalities such as hypothyroidism and electrolyte imbalances.

Risk factors for an ileus include increased age, severe infection, severe electrolyte disturbances, and comorbidity of certain medical conditions such as diabetes or digestive disorders like diverticulitis and irritable bowel syndrome.

How do you diagnose an ileus?

Diagnosis begins with an assessment of the individual’s medical history. The severity of signs and symptoms often depends on the presence of intestinal obstruction and may include abdominal pain, bloating, loss of appetite, feeling of fullness, nausea, vomiting, and inability to pass gas or stool. During an abdominal assessment, healthcare providers may hear reduced bowel sounds.

Diagnostic imaging tests may begin with an abdominal X-ray to detect areas of possible obstruction. In mild to moderate cases, an X-ray is sufficient to confirm an ileus. However, in severe obstruction cases, a computed tomography (CT) scan may provide more detailed information about the location and type of obstruction, and may be combined with IV or oral contrasts. Other diagnostic imaging tests may include magnetic resonance imaging (MRI), ultrasound imaging, or barium enema (a special X-ray examination of the large intestine).

How do you treat an ileus?

An ileus can lead to potentially life threatening complications and should be addressed immediately. Treatment for an ileus focuses on bowel rest by limiting oral intake and discontinuing medications that may be causing the ileus. In cases where oral fluids are not tolerated, rehydration with IV fluids may be necessary. If severe nausea and vomiting is present, nasogastric tube decompression can be performed by inserting a tube from the nose to the stomach, in order to relieve pressure caused by bloating and buildup of stomach contents.

How do you treat ileus at home?

Individuals with mild forms of ileus can be treated at home with bowel rest. However, if the individual presents with persistent abdominal pain, continuous dehydration, or new signs and symptoms of infection, such as fever, shortness of breath, and rapid heartbeat, hospital admission may be required.

What are the most important facts to know about ileus?

An ileus is the temporary slowing of the digestive tract mobility known as peristalsis. It can lead to a functional blockage of the intestine, preventing the passage of food contents, gas, and liquids. With paralytic ileus, peristalsis is significantly reduced or stopped, leading to a functional intestinal obstruction and consequent buildup of stomach contents in part of the intestine. Another type of ileus is meconium ileus, commonly seen in newborns with cystic fibrosis, in which thick, sticky stool (meconium) sticks to the intestinal wall and becomes trapped in the small intestine. Gallstone ileus (more accurately known as a mechanical intestinal obstruction) refers to a large gallstone creating a blockage in a portion of the small intestine. Abdominal or pelvic surgery are the most common causes of an ileus. Other factors that can slow digestive tract mobility include certain medications, inflammation, infection, pain, and metabolic abnormalities. Signs and symptoms of an ileus can include abdominal pain, bloating, loss of appetite, and the inability to pass gas or stool. Diagnosis focuses on a review of medical history and a physical assessment. Imaging tests such as an abdominal X-ray, CT scan, MRI, ultrasound imaging, or barium enema may also be used to diagnose the ileus. Treatment typically involves bowel rest, rehydration, and discontinuing offending medications. 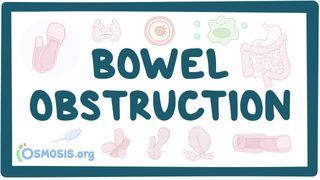 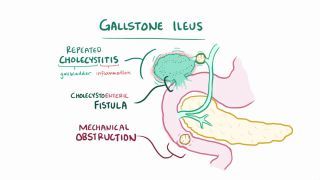 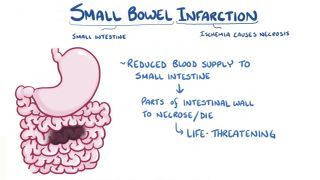