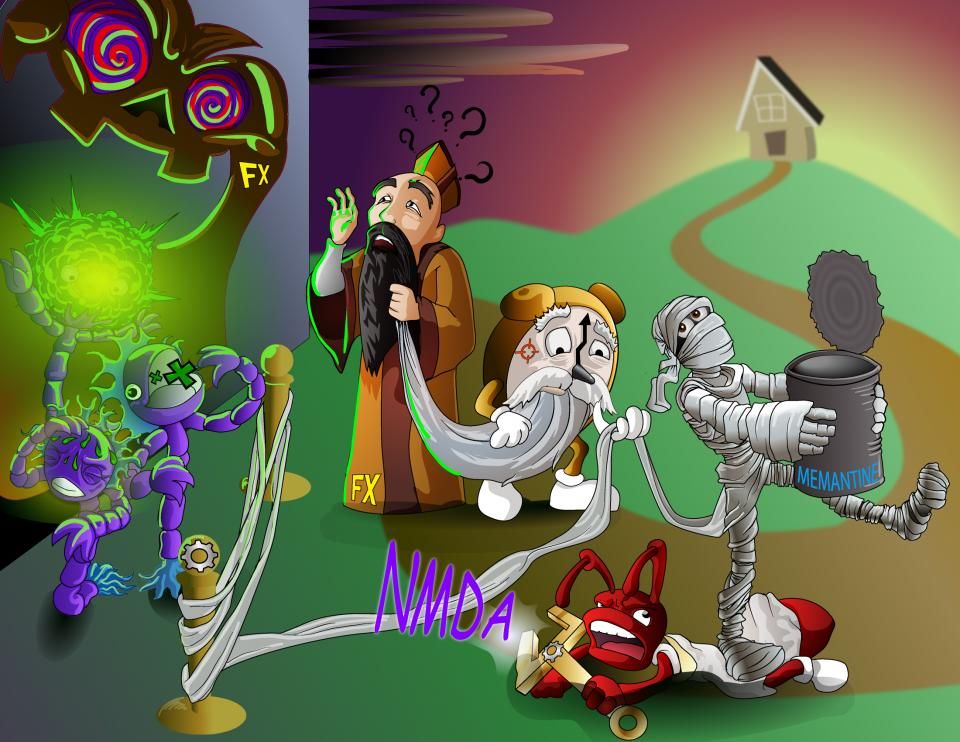 Alzheimer disease is the most common cause of dementia, and although there’s no cure, certain medications can be used to help mitigate some of the symptoms and improve the client’s quality of life.

Now, these medications can be broadly divided into two classes; acetylcholinesterase inhibitors and NMDA receptor antagonists.

Once absorbed into the bloodstream, they travel to the brain. Here, they inhibit the enzyme acetylcholinesterase, which normally breaks down the neurotransmitter acetylcholine.

As a result, acetylcholine builds up in the synaptic cleft, causing increased and prolonged effects. And since there's some evidence suggesting that Alzheimer disease is related to low levels of acetylcholine in the brain, acetylcholinesterase inhibitors can help improve symptoms.

However, increased acetylcholine levels can also cause cholinergic side effects like miosis, blurred vision, headaches, dizziness, and drowsiness.

At the same time, in the airways, acetylcholine triggers bronchoconstriction and increases bronchial secretions, which can manifest with dyspnea and a persistent cough.

In the cardiovascular system, acetylcholine slows down the heart rate and reduces blood pressure, which can result in bradycardia, heart block, hypotension, and even cardiac arrest.

Finally, in the urinary tract, acetylcholine stimulates the bladder muscles and sphincter relaxation, which may cause a sense of urgency.

As far as contraindications go, acetylcholinesterase inhibitors should be used with caution in clients with bradycardia, as well as those with intestinal or urinary obstruction.

Acetylcholinesterase inhibitors should also be used with caution during pregnancy or while breastfeeding, as well as in clients with epilepsy or a history of seizures, as well as asthma, chronic obstructive pulmonary disease, arrhythmias, coronary artery disease, as well as peptic ulcer disease, and severe hepatic or renal impairment.

In Alzheimer disease, there’s too much of a neurotransmitter called glutamate, which binds to NMDA receptors and allows an excessive influx of calcium, ultimately causing neuronal damage and cellular death. So, NMDA receptor antagonists can limit the calcium influx and prevent neuronal damage.

Now, side effects commonly associated with NMDA receptor antagonists include drowsiness, headache, and agitation. Other side effects include nausea, vomiting, and either constipation or diarrhea.

Finally, NMDA receptor antagonists should be used with caution in pregnant or breastfeeding clients, as well as those with epilepsy or a history of seizures and severe hepatic or renal impairment.