Assessments
Anatomy of the foot

Anatomy of the Foot 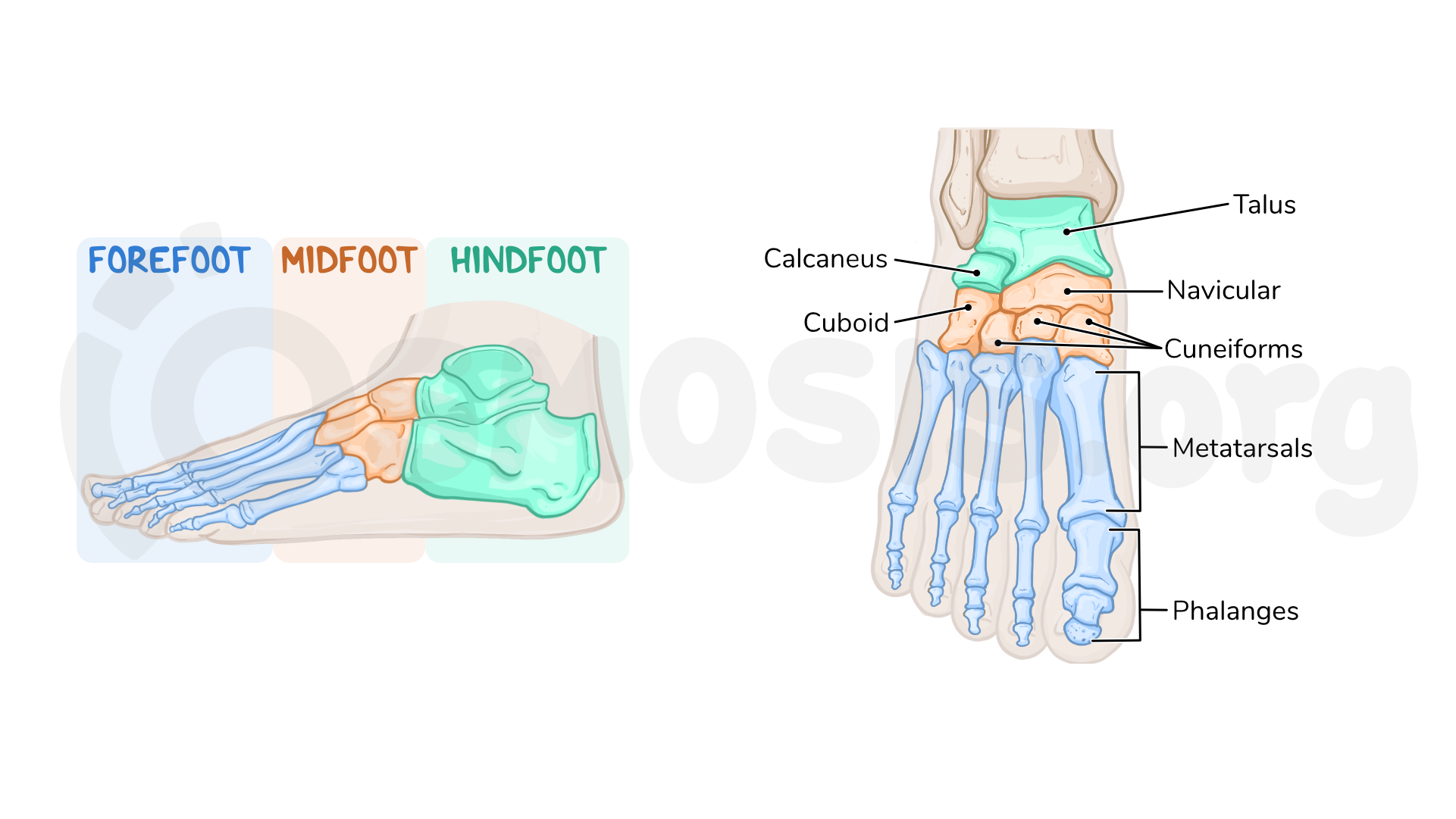 Figure 1. Sections and Bones of the Foot A. Lateral (Left) B. Anterior (Right) 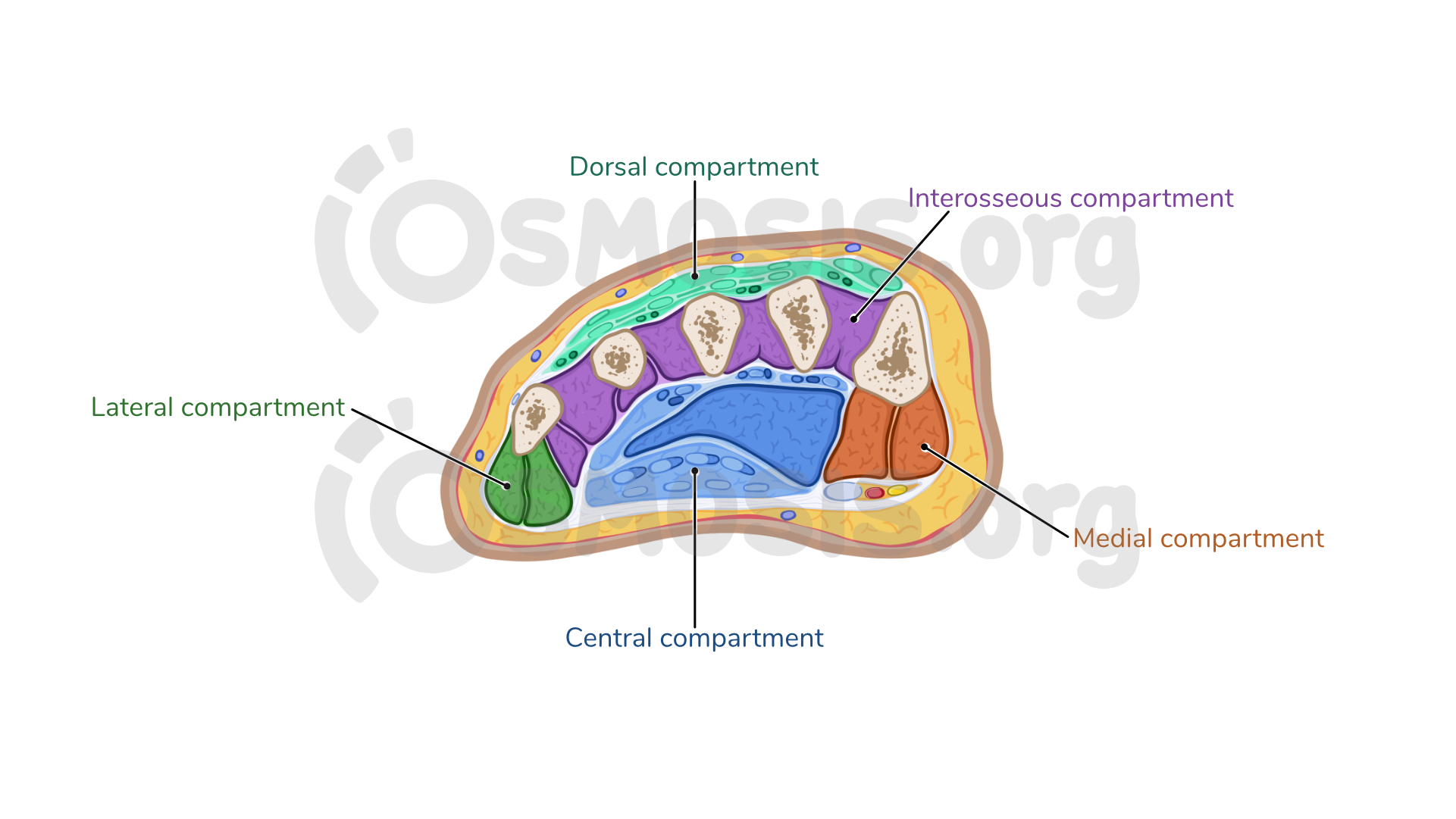 Figure 2. Compartments of the Foot A. Cut Section through Mid-Foot 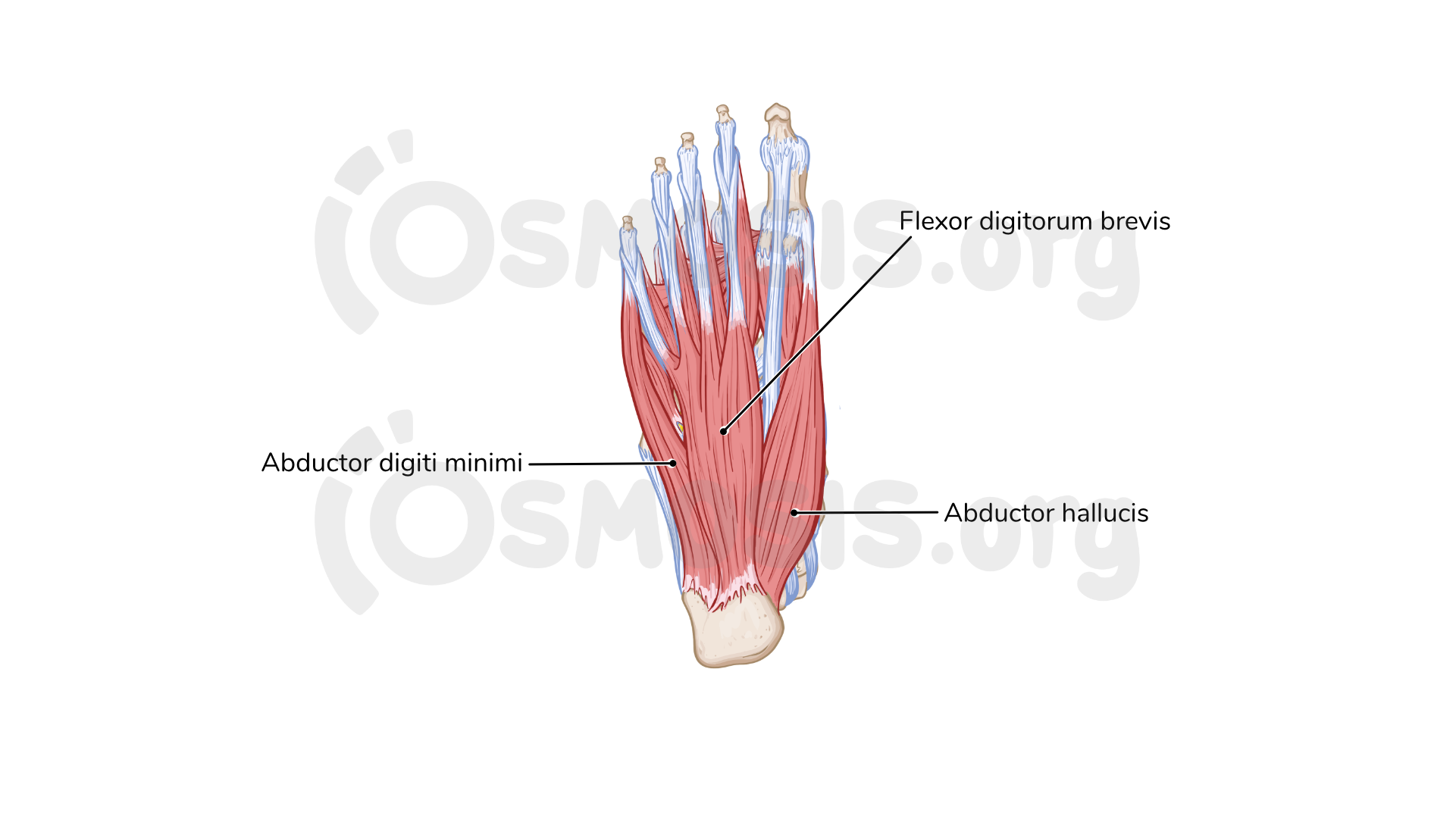 Figure 3. First Layer of the Foot A. Plantar View of Right Foot 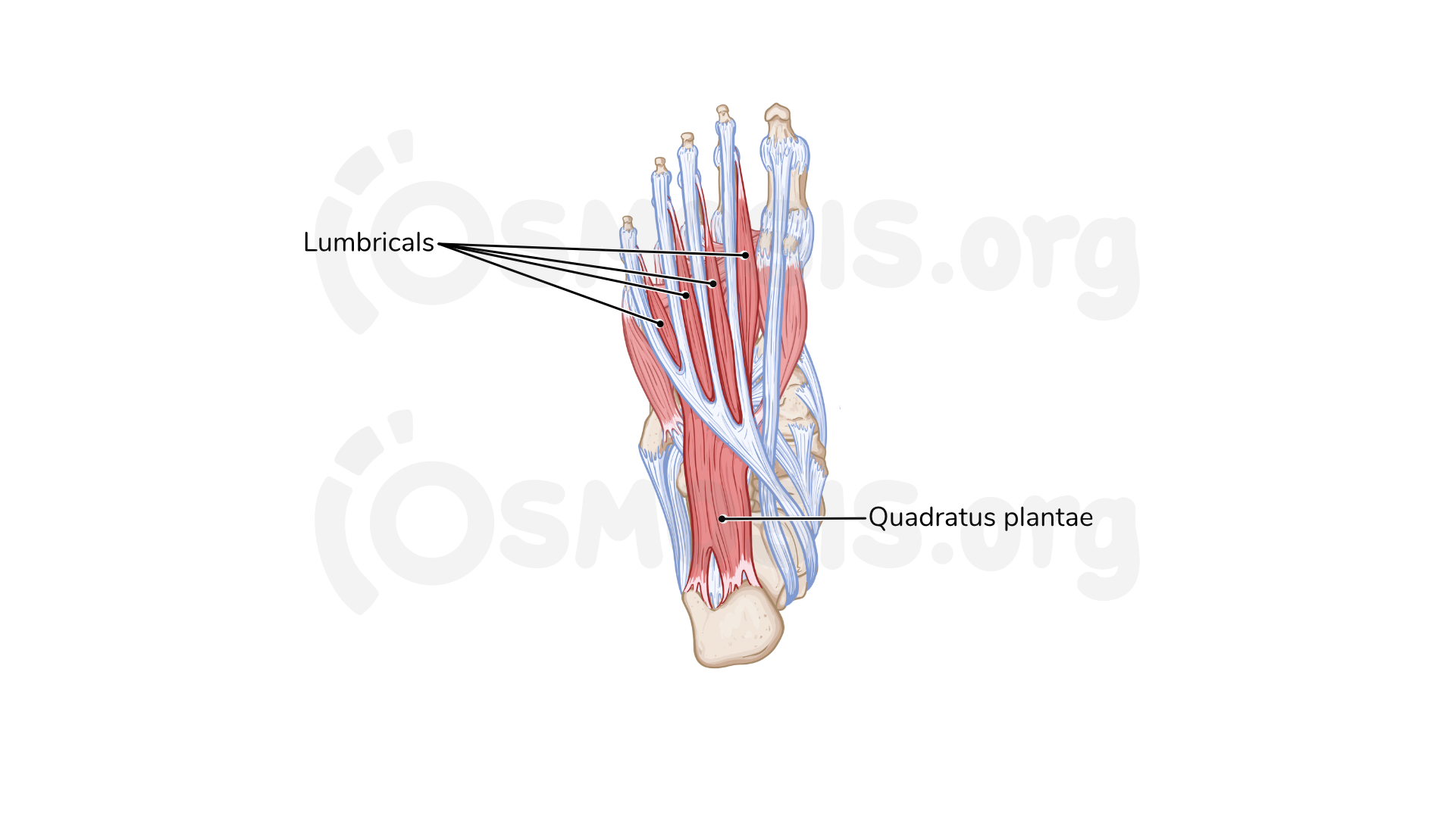 Figure 4. Second Layer of the Foot A. Plantar View of Right Foot 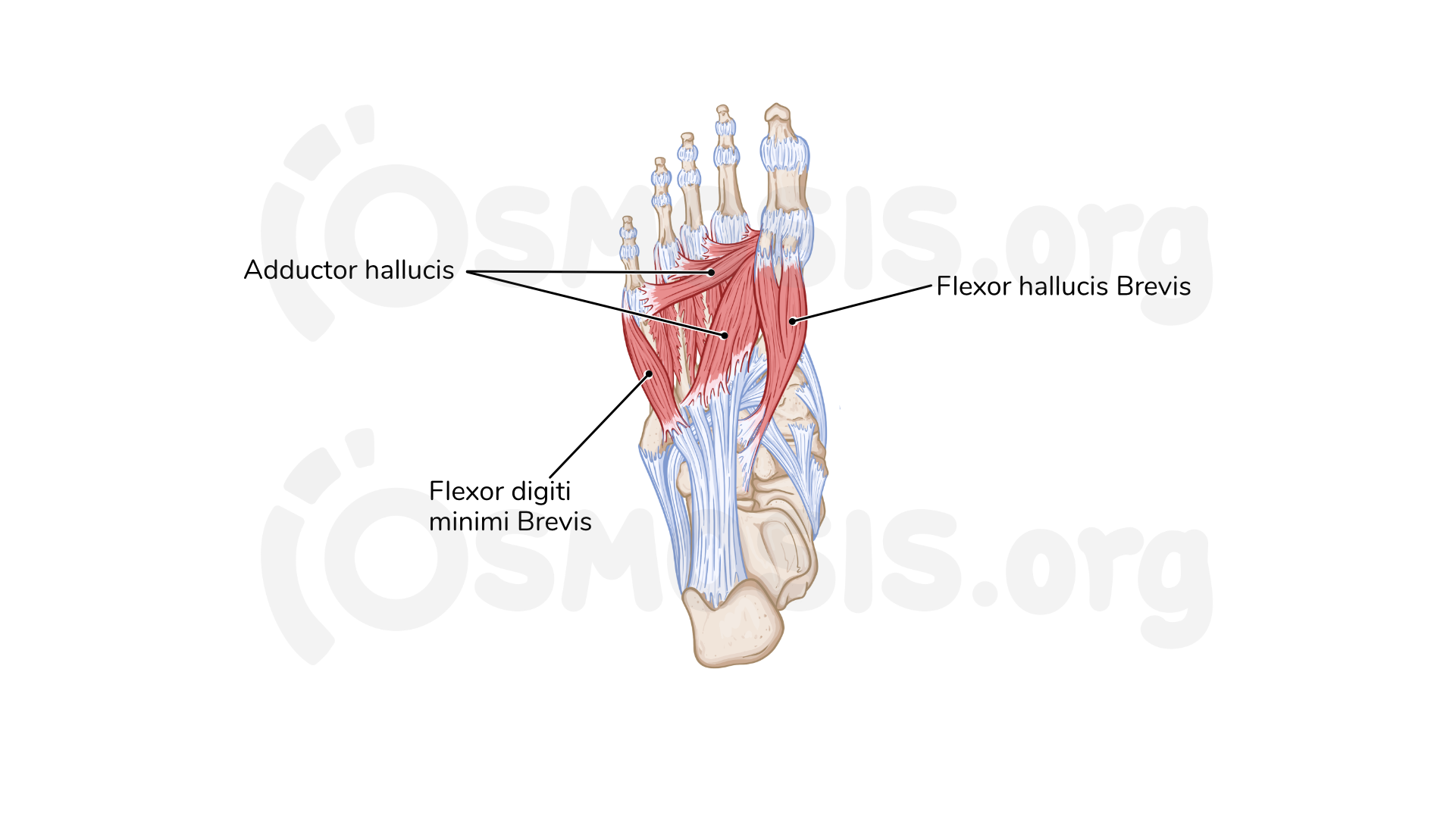 Figure 5. Third Layer of the Foot A. Plantar View of Right Foot Figure 6. Fourth Layer of the Foot A. Plantar View of Right Foot 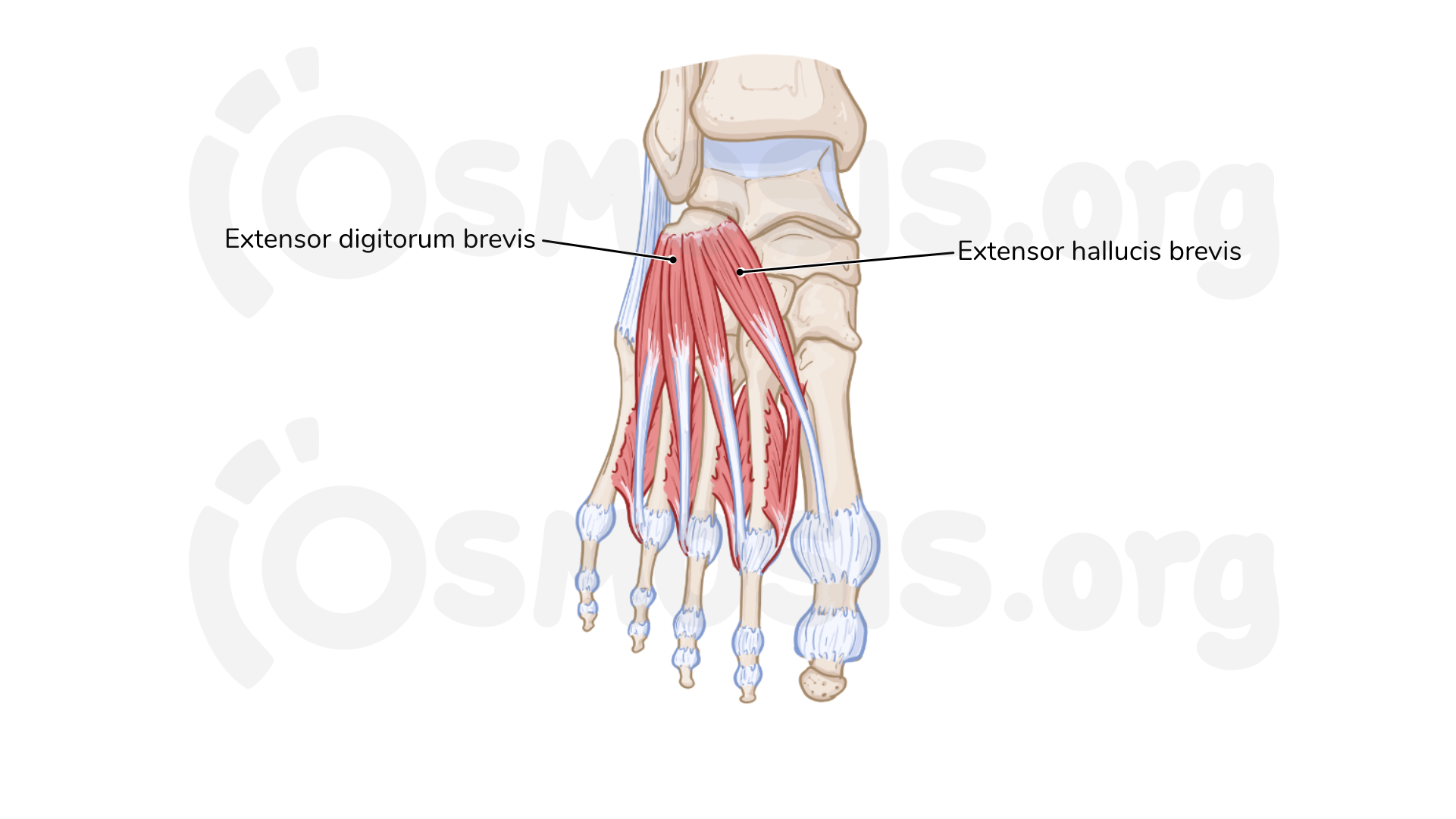 Figure 8. Innervation of the Foot A. Plantar View of Right Foot Figure 9. Cutaneous Innervation of the Foot A. Plantar View of Right Foot B. Anterior View of Left Foot and Ankle 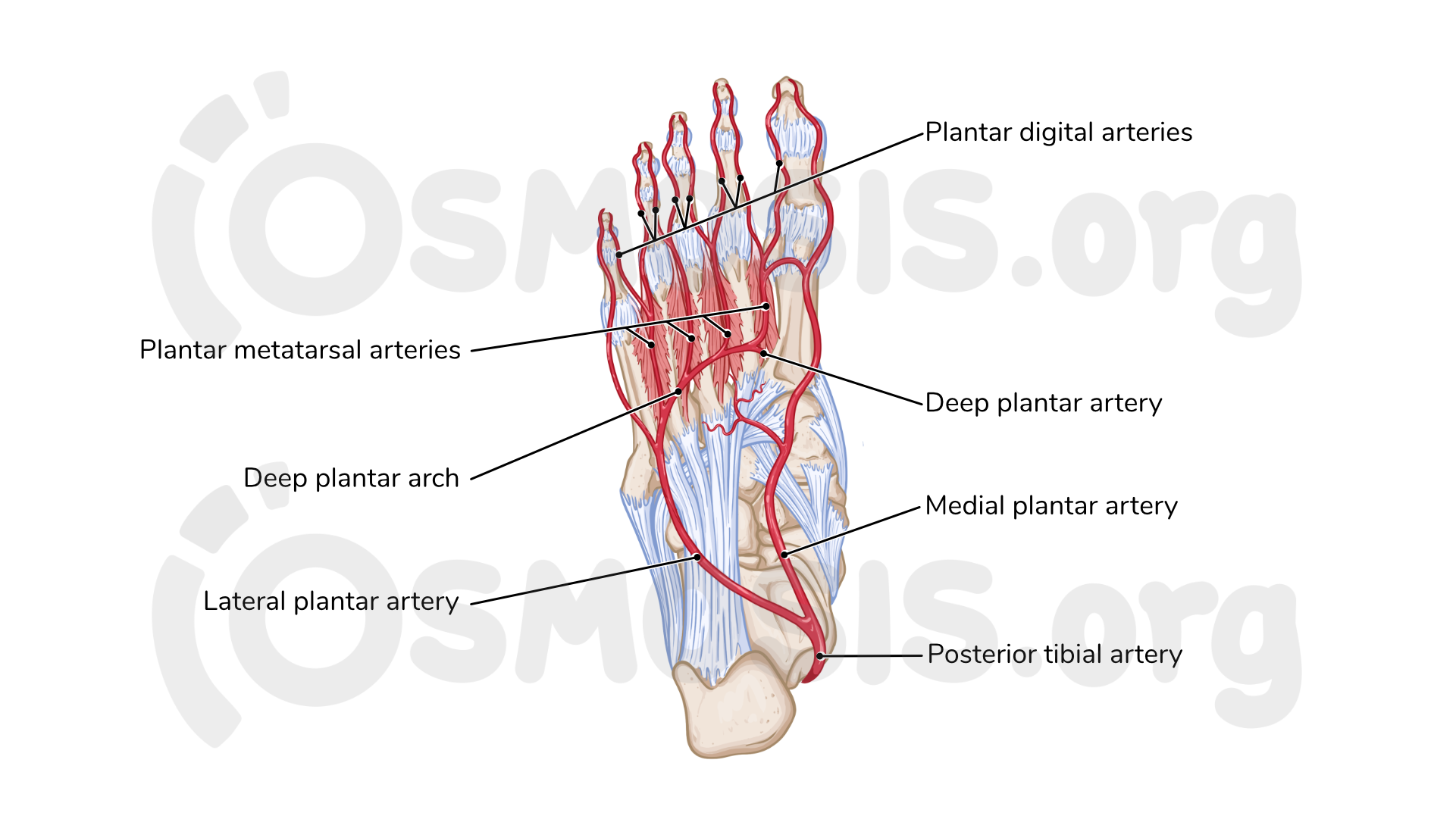 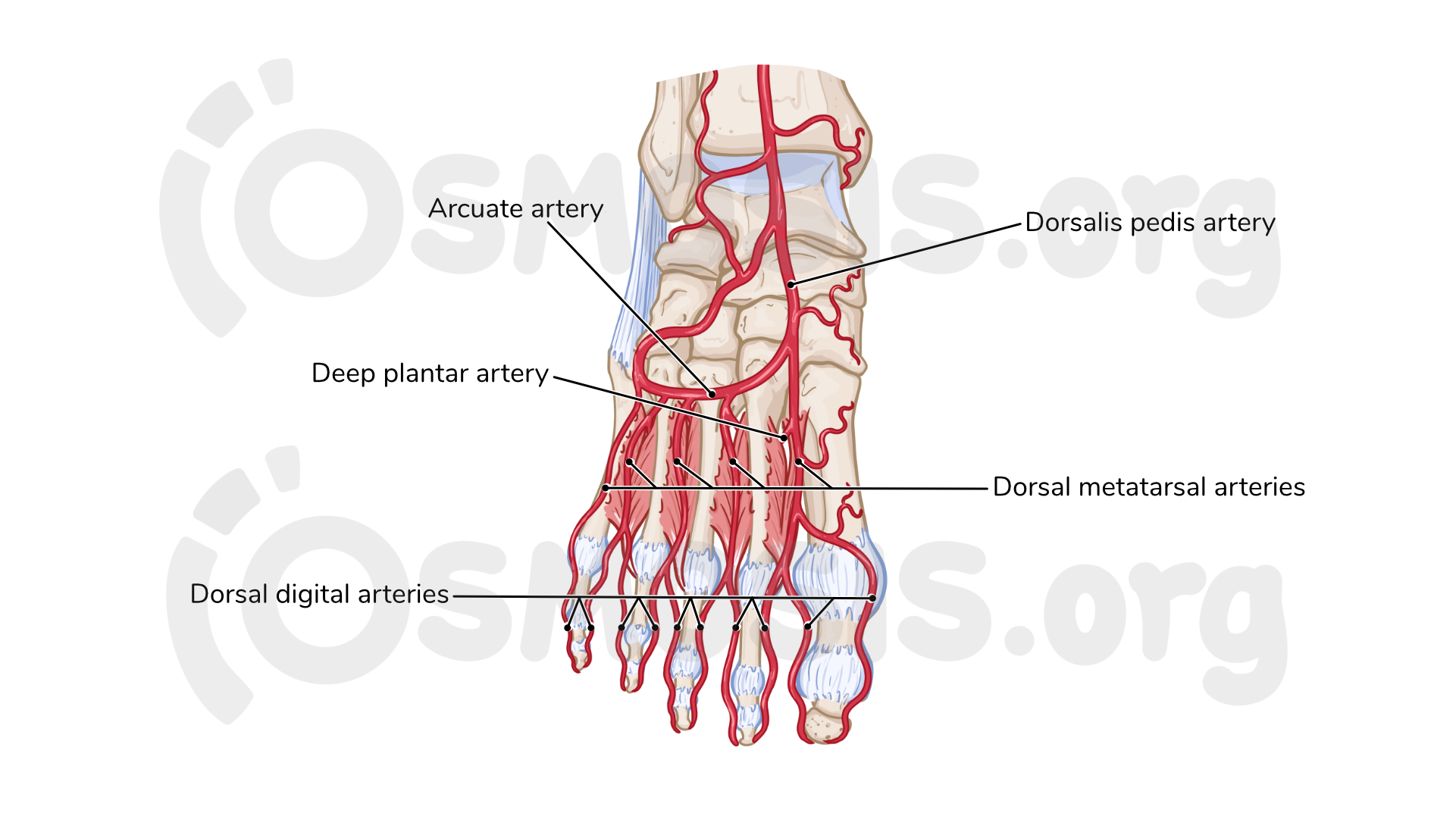 Muscles of the Foot 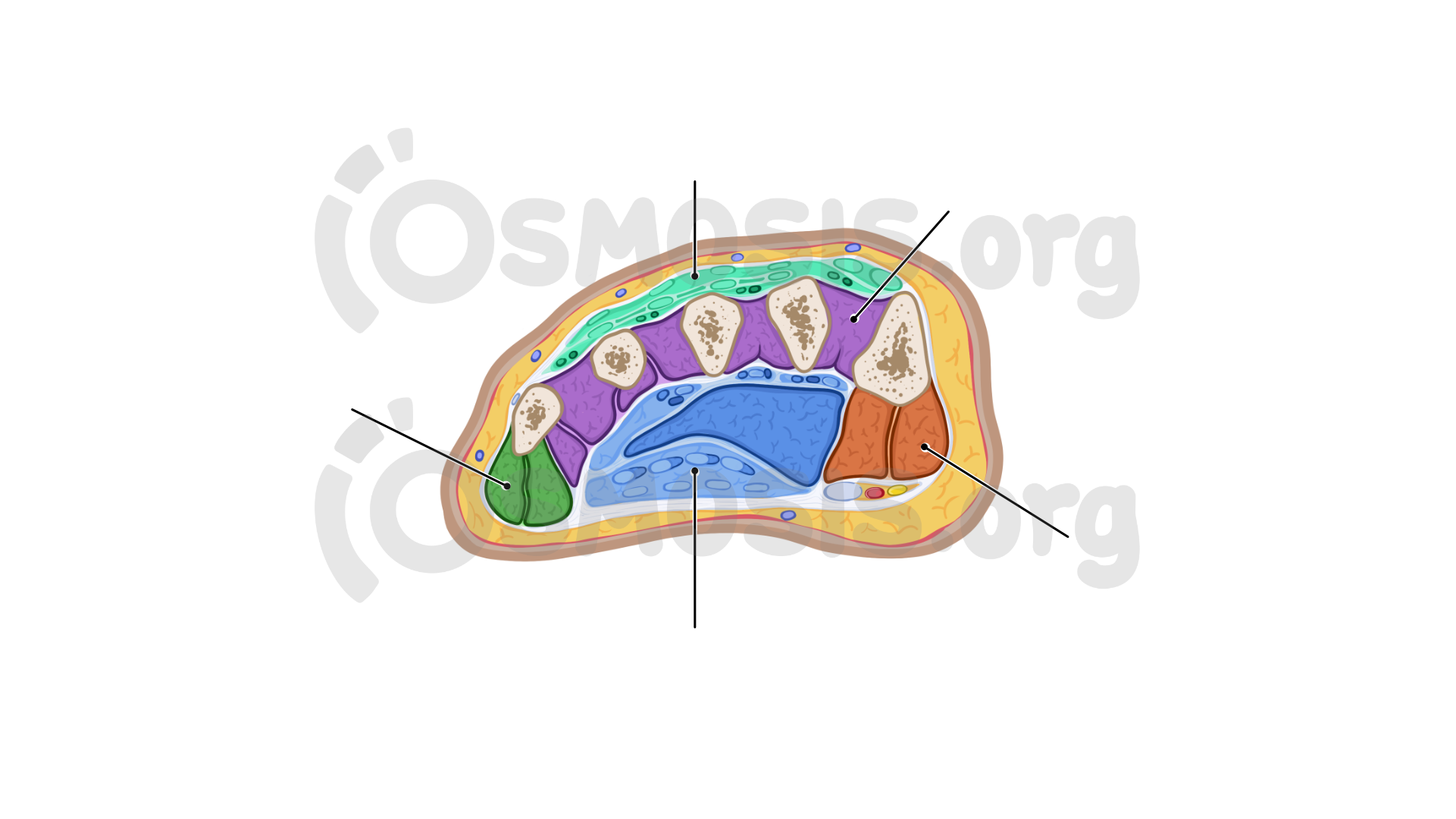 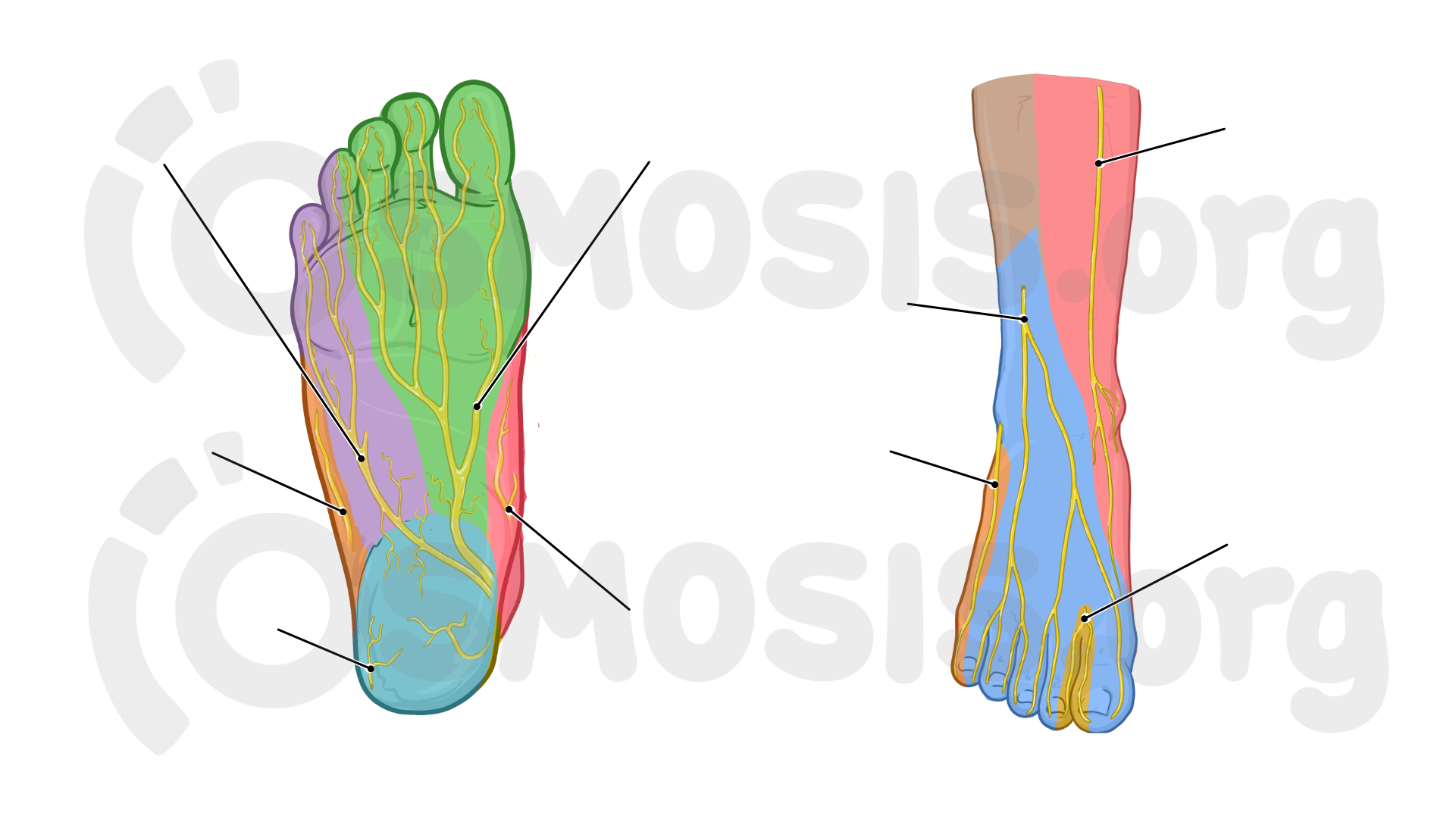 The arcuate artery is indicated in the image below.

Okay everyone, you are going to get a real kick out of this video, because we're going to talk about the anatomy of the foot.

So let’s talk a bit about the foot’s components. The most superficial elements are skin and fascia, which vary in thickness and strength across the foot, depending on if the area has roles in weight-bearing, ground contact, or compartmentalization.

The skin on the dorsum of the foot is much thinner and less sensitive than the one on the sole. By contrast, the thick skin on the sole is ticklish, hairless, and has numerous sweat glands.

The fascia of the foot can be divided into superficial and deep fascia. The superficial fascia or the subcutaneous fat tissue is loose and deep to the dorsal skin.

It is much more fibrous in the sole and is thicker than in other areas of the foot, making the heel act as a shock absorbing pad.

The deep fascia of the dorsum of the foot is rather thin and continuous proximally with the inferior extensor retinaculum.

It is also continuous with the plantar fascia, the deep fascia of the sole, over the lateral and posterior aspects of the foot

Speaking of which, the plantar fascia on the plantar aspect of the foot helps protect the sole from injury, and supports the longitudinal arches of the foot.

It consists of a thick central part, called the plantar aponeurosis, and weaker medial and lateral parts.

The plantar aponeurosis is strong, because it consists mostly of longitudinal bundles of dense fibrous connective tissue that invests the central plantar muscles.

These longitudinal fibers originate as a single entity on the medial process of the tuberosity of the calcaneus, and as they move towards the toes, they divide into five bands that become continuous with the fibrous digital sheaths that enclose the flexor tendons that pass to the toes.

Each band splits opposite to the metatarsophalangeal joints into a superficial and a deep slip, blending with the skin and deeper ligaments of the distal foot and also embracing the flexor tendons to the toes.

Now, in the midfoot and forefoot, the plantar aponeurosis has vertical intermuscular septa that extend superiorly from its margins toward the 1st and 5th metatarsals, forming the medial, central and lateral compartments of the sole.

The medial compartment is covered superficially by the thinner medial plantar fascia and it contains muscles and neurovascular structures of the foot.

The central compartment of the sole is covered by the dense plantar aponeurosis and contains muscles and tendons of the foot as well as neurovascular structures.

There is also the lateral compartment of the sole, which is covered superficially by the thinner lateral plantar fascia.

Now, the sole purpose of this section was to toe-tally blow you away! And before we move on to the components of the foot, let’s have a break and review its structure.

So now, let’s look at the muscles of the foot. There are up to 20 individual muscles in the foot, and most of them are on the plantar surface. These plantar muscles are conveniently grouped into 4 different muscle layers.

On an important side note, despite their compartmental and layered arrangement, the plantar muscles function primarily as a group during the support phase of the stance of walking, maintaining the arches of the foot.

They also play a role in maintaining balance and individually, they help control the movement of the toes. Now before we start, to help remember how many muscles are in each muscle layer, just think of 3-2-3-2.

To make that even easier to remember, think the odd layers, or the 1st and 3rd, have 3 muscles, which is an odd number, and the even layers, 2 and 4, have an even 2 muscles each.

It originates on the medial tubercle of the calcaneus and l tuberosity and the plantar aponeurosis, then moves towards the toes inserts on the middle phalanges of the 4 lateral toes. This muscle flexes the lateral four toes at the metatarsophalangeal and proximal interphalangeal joints.

The abductor hallucis forms the medial margin of the foot and it originates on the medial tubercle of the calcaneal tuberosity and plantar aponeurosis, from where it travels to and inserts on the medial side of the base of the proximal phalanx of the great toe. This muscle mostly abducts and flexes the great toe at the metatarsophalangeal joint.

And finally, there is the abductor digiti minimi muscle which is located on the lateral side of the foot. It originates on the lateral and medial tubercles of the calcaneal tuberosity and on the plantar aponeurosis.

Then, it inserts on the lateral side of the base of the proximal phalanx of the 5th digit - or pinky toe - which it flexes and abducts at the metatarsophalangeal joint.

And then there are the four lumbricals, which counts as 1 for our 3-2-3-2 memory trick. The’re located medial to and attach to their respective tendons of the flexor digitorum longus, like little satellites. This group of muscles causes flexion of the metatarsophalangeal joints and extension of both interphalangeal joints.

The third layer has 3 muscles: the flexor hallucis brevis, flexor digiti minimi brevis, and adductor hallucis muscles. Flexor hallucis brevis is located on the medial side of the foot, and it originates from the plantar surfaces of the cuboid and lateral, or third, cuneiform bone.

Flexor digiti minimi brevis originates on the base of the fifth metatarsal. It travels to the tips of the toes and then attaches to the lateral side of the base of the pinky toe’s proximal phalanx in order to flex the pinky at the metatarsophalangeal joint.

And then, there’s the adductor hallucis muscle, which is located lateral to the flexor hallucis brevis. It consists of both an oblique and transverse head.

Ultimately, this adductor, well, adducts the great toe and assists in maintaining the transverse arch of the foot. And the fourth and final layer is made up of 2 groups of muscles, the plantar interossei and dorsal interossei.

And finally, the 4 dorsal interossei are also located between the metatarsals, and each of them originates from the adjacent sides of the shafts of metatarsals 1 to 5.

They share a common muscle belly and originate from the calcaneus, and from this muscle belly four tendons arise and attach to the extensor expansion of digits 2 to 4.

A portion of this muscle then goes on to attach to the base of the proximal phalanx of the great toe and is the extensor hallucis brevis muscle.

Let's move on to the nerves supplying the foot, starting with the 4 muscle layers of the foot, which are all innervated by either the medial or lateral plantar nerve, which are terminal branches of the tibial nerve.

The medial plantar nerve is the larger and more anterior of the two terminal branches, and arises deep to the flexor retinaculum.

The medial plantar nerve then provides motor branches to the flexor hallucis brevis and 1st lumbrical muscle, and a sensory branch that goes on to innervate the skin on the medial side of the sole.

Finally, the medial plantar nerve terminates near the bases of the metatarsals by dividing into three sensory branches called the common plantar digital nerves.

These branches supply sensory information for the skin of the medial three and a half digits, including the dorsal skin and nail beds of their distal phalanges, and the skin of the sole proximal to them.

So in total, the medial plantar nerve innervates 2 muscles in the first layer, then 1 muscle in the second layer and 1 muscle in the third layer, along with its cutaneous innervation.

Next, the lateral plantar nerve, which is the smaller and more posterior of the two terminal branches, also courses deep to the abductor hallucis but runs anterolaterally between the 1st and 2nd layers of plantar muscles.

The lateral plantar nerve terminates as it reaches the lateral compartment, dividing into superficial and deep branches, where the deep branch courses in a neurovascular plane between the 3rd and 4th muscle layers.